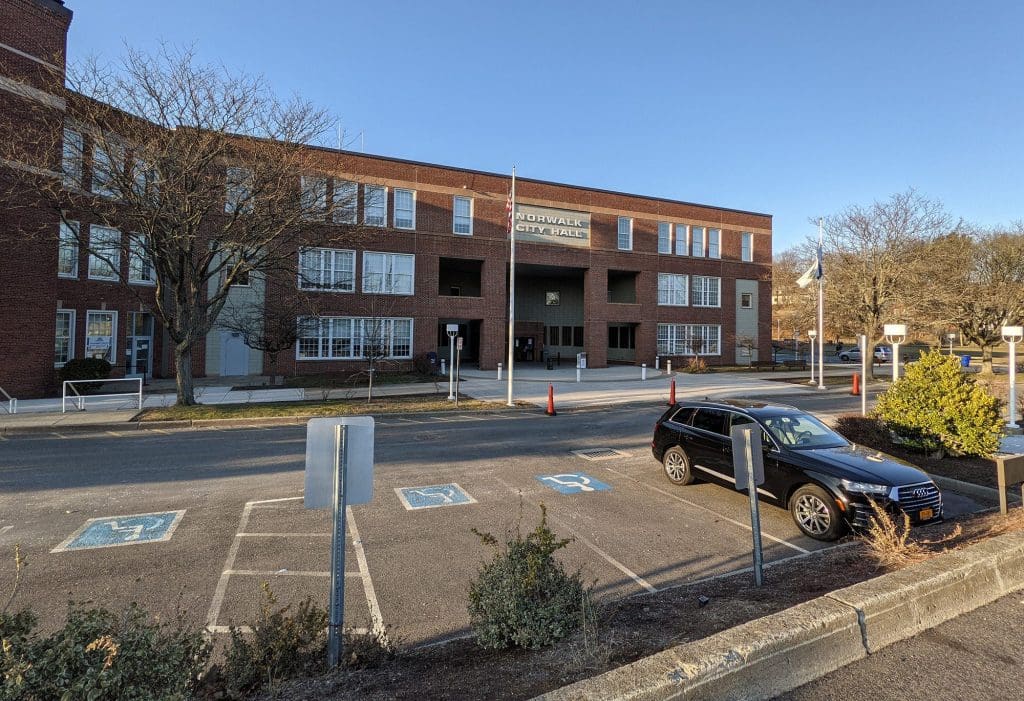 NORWALK, Conn. — Due to the ongoing COVID pandemic, Norwalk City Hall will remain closed to the public and most city workers will continue their “work from home” arrangements until at least November of 2022, Mayor Harry Rilling said Wednesday.

City Hall has been largely closed to the public since the beginning of the precautions taken in March of 2020 in response to the COVID19 pandemic and Rilling has seen it working well so he intends to keep in that way for the near future, he said.

“My first priority is for the safety of Norwalk’s residents and municipal employees,” he said. “No case of COVID in Norwalk has been traced to the public being allowed to freely come and go from City Hall and I intend to keep that trend going. I’d rather be too careful than to open up too early.”

Many of the services typically transacted by Norwalk residents are now available easily online. Communications Director Josh Morgan said, “We couldn’t have launched the new website at a better time. Norwalkers are used to having their meetings on Zoom and ordering their essentials from Amazon. It just makes sense that they’d want to keep their business with City Hall online, as well.”

“I really feel like we’re on the cutting edge of something big,” Morgan said. “In the future, all interactions with state and local governments will be moving to the cloud and e-commerce models. We’re ahead of the curve.”

Work from home arrangements are also a “win-win for everyone,” said Rilling. City staff seem to prefer working from home.

Director of Personnel and Labor Relations Ray Burney said, “Having most of the staff working from home has been great. They seem very productive and can organize their time better.”

Property assessors have been particularly successful in working from home, he said. The Tax Collector’s Office will now follow suit.

“When you do it all online, the folks in the Tax Collector’s Office can decide when they want to work on it depending on what else they have going on that day,” Burney said. “Everything gets taken care of, an email is sent out when it’s all done and everyone has a bit of breathing room. Work from home is easier for everyone and is great for morale.”

The fees, which will underwrite the cost of COVID-mandated sanitizing, will be collected at the entrance by former Calf Pasture Beach gate attendants.

Norwalk Arts Commission Chair, Mark Alan said, “We have some great art and displays in City Hall and people enjoy seeing the place where ‘the people’s work’ is done.” The Arts Commission hopes that the entry fees for City Hall tours can be used to help offset some of the operating revenue lost due to the Museum and the Mill Hill facilities being closed. No decision has been made yet about vaccine requirements for tours. “Everyone should get the vaccine as soon as possible,“ said Rilling, “I understand that some people might not want it but the most important thing is to keep public servants and volunteers safe. We can’t take chances.”

Keeping City Hall closed will also be a cost savings to taxpayers. Finance Director Henry Dachowitz said, “During COVID, the operational overhead at City Hall has decreased. When you have fewer people there, you don’t need to heat the building as much, you don’t need to keep the lights on. It’s no different from turning the thermostat down at home.”

City Hall may remain closed beyond November 2022 but there will be no plans to reopen it before that time. Asked for clarification on how the November 2022 date was decided, “That seems to be a time when we can be sure that everything will return to normal, if you look at the science,” said Rilling. He added, “We’re working really well, now, so if we need to extend the closure, it will be very easy.” 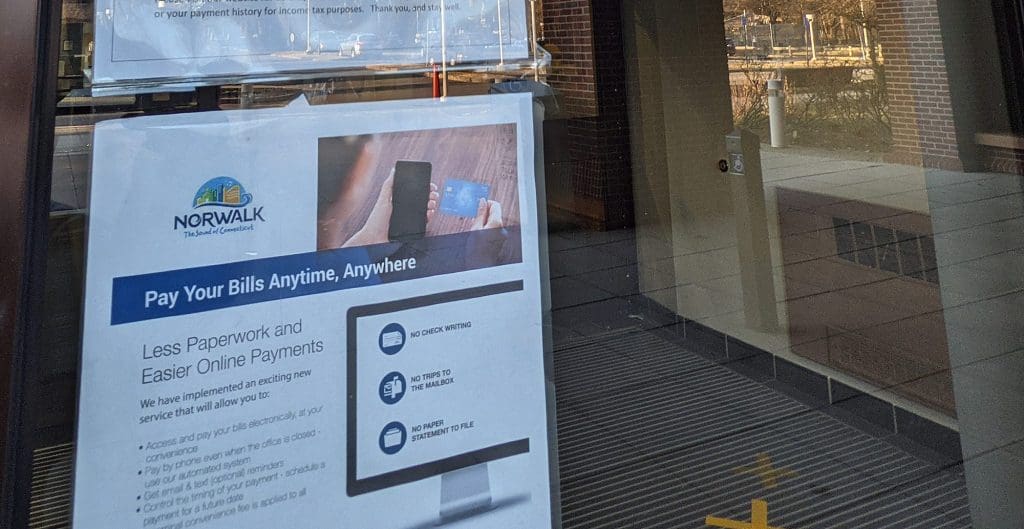 A sign posted in the door at City Hall. The sign can be repurposed, saving taxpayer money, Mayor Harry Rilling said.

In other municipal news

Norwalk’s Zoning Commission is scheduled to rule on whether residents of a quiet Broad River street will see construction of a drive-in movie theater at the end of their cul-de-sac in an AAA residential zone.   The applicant, Chester Linzer of 19 Whipporwill Court, who hopes to erect the facility in his backyard, told NoN that he’ll be showing films “with Biblical connotations,” but declined to give specific examples.

“I know my rights,” he said.  “The RFRA says that they can’t stop me,” an apparent reference to the Religious Freedom Restoration Act, which supersedes local zoning laws that would infringe upon an individual’s religious practices.

Neighbor Al Dunfey worries about the traffic.  “They’ll be going back and forth right past my house,” he said.  “What about my rights?”  Linzer countered by saying that a recent traffic study predicted little or no impact on the street.

Linzer’s attorney Zoe Hartwell said that if the application is denied, Linzer “could rent his yard to contractors who would park trucks and store materials there.”  When reminded that such activity would violate City zoning regulations, Hartwell laughed and said “Come on!  This is Norwalk!”

Not all of Linzer’s neighbors disapprove.  “I think it’s great! “ Marie Piedmont who lives at 8 Whipporwill said.  “My husband and I so miss Friday nights at the old Norwalk Drive-In, where we’d neck and eat popcorn.”

A public hearing on the application is expected to be announced.

*This is also an April Fools Day joke.

I thought this article was real, until I realized today is April Fools Day! Good one Mr. Mayor! You had me right up until the $4 admission fee to enter City Hall. I should have known it was a fake article when it was mentioned that citizens are used to these ridiculous Zoom meetings. I’m glad to see the mayor and his staff have not lost their sense of humor, we all needed a good laugh.

The fall election for Mayor, Council, BOE, etc. will be conducted by voice vote this year. At noon on election day everyone voting for the Democratic candidates will make as much noise as possible. At 1:00 p.m. those voting for the Republican candidates will do the same. The volume of these two “votes” will be compared with special audio equipment recently purchased by the city, and the winners declared at 2:00 p.m. The equipment is capable of filtering out noises from non-citizens, under-age individuals, and out-of-towners, and uses voice recognition software to assign the voice vote to individual Norwalk voters. The equipment is expensive, but that cost is off-set by the money saved by not printing ballots and not hiring poll workers.
Voters who will be working in New York at that time may hire a registered surrogate to voice-vote for them.
Stuart Wells, Registrar

Sell city hall to spinnaker and have them build condos since local government does not need the space.

Comic relief of the year: “City staff seem to like working from home”. Amazing!! Whoda thunk it? Makes me wonder how many of those appreciative city workers I run into at 1p in the gym, which I’ve been back at since 6/20.

I admire the City Hall for continuing to function during COVID, but don’t you think March 31, 2021 is too early to say that it will be closed until the end of November 2022? That is 20 months away. A lot can happen in that time. There was no need to make such a statement. That is a poor way to manage an organization.

I mean, this is April 1st, so this is probably an April Fools thing, but it’s also Norwalk, so these things could both be true. ..

So the Country is getting back to normal but not in Norwalk?! People are sick of Zoom Meetings and making Amazon bigger then ever before. That’s a very very mis-guided statement from the Mayor. What a great way to support local business and commerce…NOT! Even NYC employees are being orders back on May 1 and open to the public. Why should City Hall be any different. We want and need normalcy more then ever! We need leadership!

Working from home is really entrapping us ….yeah in the short term it feels good, but our mental health is suffering the consequences. Every day so repetitive. Virtual interaction is not the same at all. We need to fight for opening everything again once all vaccines have Been given. We can’t all be forced into our homes forever. This is insanity

Too bad Estrella doesn’t feel the same way. Working from home certainly does boost productivity, makes better use of employee time, and eliminates the horrific office culture on the third floor.

This must be an Arril fools prank.

Is this last topic an April fools day joke?

This has to be an April Fool’s Day prank! Really? a year and a half? There are some things that cannot bve accomplished on line and what about seniors who are not computer savvy? I didn’t see anything about this in The Norwalk Hour today. If anyone knows, please let us know. Many thanks.

It’s hard to know where to begin with a decision like this. But what overwhelms apparent good intentions is the fact that this continues to lessen the public’s participation in government. No computer? No way to join a City meeting or conference is provided or apparently considered. And charging a fee to tour City Hall? Really? Hopefully a creative lawyer or two will pull back this Oz-like attempt to keep the public out of City government… and charge those who seek to access public art or want to see where the people’s work used to be done.

And look at the only car in the parking lot … Norwalk Superintedent Alex Estrella! She is one hard working leader! Not the Mayor!!

How about creating the first cloud-based virtual City Hall and having Harry donate the building to the RTC? Employees productive at home? Why wouldn’t Ray mention happier employees who can now work without pants? Savings on electricity? Couldn’t Henry funnel those savings to the BOE and give them an unlimited budget?

In other news, the Associated Press and Comedy Central collaborated to create a new accolade, the NoN-Funny Citation, awarded annually to the lamest April Fools prank by a journalist.

I made the mistake of reading this article before I’d had coffee this morning, and in my “beginning-of-the-day” stupor (as contrasted with my stupor at other times of the day), I bought this hook, line and sinker. Exceedingly well done Nancy!!!

This should have said April Fools Day Joke at the bottom in big letters from the beginning. It was irresponsible and in bad taste to publish it. It now makes one question the credibility of anything that is written here.

The asterisks were the big tipoff but yet I bet you dollar to donuts, Reilling won’t open much earlier than that.

In other words, wouldn’t surprise me.

The sad part here is that town hall is not open and professionals that are dealing with the booming real estate market are struggling with the fact that city hall is not open. The Mayor has no plan. He enjoyed his new boat all last summer and I am sure that his goal for the upcoming summer. He will change out his bunny slippers for his boat shoes. He will show up for a photo opp though.

@Fran Di Mieglio really? I thought the piece was worthy satire and for those who thought it was anything but satire you really need to get your sense of humor back.