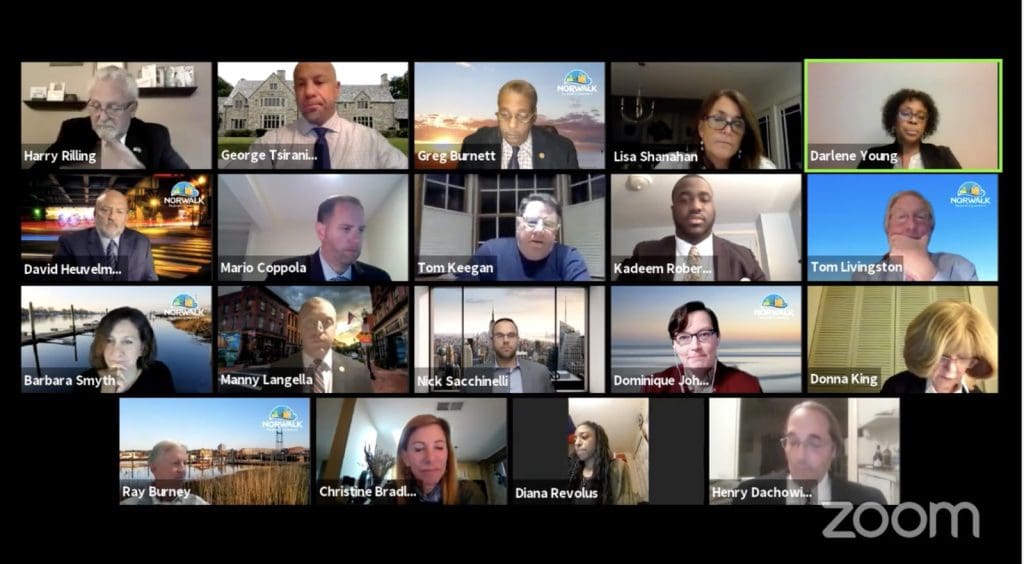 The Common Council voted 12-1-2 to amend its citywide master plan to incorporate the East Norwalk Neighborhood TOD Plan, which aims to provide a vision for the area within one mile of the East Norwalk train station, to serve as a guide for future development.

“Overwhelmingly, the emails, the phone calls, the workshops—the citizens of East Norwalk, the people who are going to be dramatically affected by this plan, have all said that they don’t want it,” Keegan said. “And I think it’s equally important that we, as representatives of the people, listen to them.”

“I think a lot of people from the area believe that there’s good to this plan,” he said. “I think there’s no one that will deny that the area isn’t in need of a facelift.”

Still, he encouraged residents to let the Zoning Commission know their thoughts about the proposed regulations, since that seemed to be where many of the concerns were.

Residents weighed in throughout the summer as the plan took shape, expressing multiple concerns about the additional height and density allowed in the plan as well as the additional traffic and utility use that could come with more people coming into the area. While some parts of the plan, including the village districts that would preserve the Liberty Square and Cove-First Avenue areas were received positively, the main area of contention has been the East Avenue corridor, from about I-95 South towards Gregory Boulevard and Cemetery Street.

The new zoning in the plan would allow for an additional story in exchange for certain amenities, allowing buildings with 3.5 stories instead of 2.5 stories. Steve Kleppin, the City’s director of Planning and Zoning, said that 3.5 stories allows for more attractive architecture compared to 3 stories which would only feature flat roofs. Kleppin and other City officials have said that the density is needed to support desires for businesses and other amenities in the area.

“To get the kind of street activity, to get the street amenities that everybody says they wanted, there has to be an impetus for a private developer to improve his property,” Kleppin said. “So I think that we tried to strike the right balance here. And I think this is the appropriate scale and appropriate mix.”

He emphasized that 3.5 stories is much smaller in terms of height and density compared to other areas of the city, such as South Norwalk and East Norwalk, where the height can be 6+ stories.

“We said from the outset of this process that we understood East Norwalk was much different than South Norwalk or the West Ave./Wall Street area,” he said. “We knew it had its own feel.”

“As you all know, one of the major concerns is the possibility for over density and overpopulation. And with the potential to have 1200 additional residential units. It’s really not of comfort to the residents to have staff say that that’s probably not going to come to fruition,” she said.

Eleven comments were attached to the Council’s agenda raising various concerns about the plan. These comments come after two multiple hours-long hearings with the public through the Planning Commission.

“The resident’s main objection was the traffic impact of adding another few thousand people to an already overloaded grid,” resident Joan Vitali wrote. “Parking, already in short supply, will be non-existent.”

“I understand the predicted benefits of a Transit Oriented District,” resident Alan Kibbe wrote. However, Covid-19 has fundamentally changed the way we work. Tens of thousands of former commuters now work from home. Desk-based businesses have learned that they no longer must lease thousands of square feet of the most-expensive office space available to provide their workers a place to work. It’s a win-win of sorts. The question then becomes, what is the point of a TOD if vastly fewer workers commute to work? At the very least, TOD plans should be put on hold until we determine the future trend in commutation.”

Activist Diane Lauricella emphasized the need for this plan to include green infrastructure.

“This would be one important step for this Council to make sure that the Planning Commission understands that this Council wants us to take a look at climate change as a means to save money for people operating their businesses and homes, but also that we as a city want to reduce our carbon footprint,” Lauricella said.

Council members agreed with Lauricella and included a recommendation to the Planning and Zoning Commissions to find ways to “include green building techniques, sustainable materials use, renewable energy sourcing, energy efficiency standards, and affordable housing standards in the plan, not as bonus amenities that earn points, but as baseline standards by which new construction will be held to.”

The next steps would be for the Planning Commission to adopt the East Norwalk TOD plan at a special meeting 6:30 p.m. Tuesday, Oct. 6. The zoning recommendations in the plan would also go separately in front of the city’s Zoning Commission, which will allow for more public input and the possibility for changes to them, Kleppin said.

Norwalk has No Water. Is there a development plan for that.

Current Water emergency is expected to be more frequent. Perhaps expand the reservoir or build a desalination plant as part of planning for destiny growth.

Concerned Taxpayer makes an excellent point. Can a person with professional expertise tell us if desalination has become financially viable?

These are some great points about water usage going forward. I just asked Alexa and she said each american uses 101.5 gallons per day. Just as we have traffic studies for new development we should include water usage studies. It’s not a stretch to think we could have an additional 800 new residential unit’s in East Norwalk in the not too distant future under this plan. 1600 new residents at 100 additional gallons of water each day. How are we preparing for this? To my knowledge water use and increasing infrastructure for the future has not been discussed in any way as part of our future development plans. But it certainly needs to be . Remember global warming and climate change are here to stay.

Shame on the Members of the Common Council, except Tom Keegan and George Theodorisdis

Thank you to Tom Keegan and George Theodoridis for listening to the people of ENO.

Thank you Tom Keegan and George Theodoridis for listening to the ongoing objections to this plan. It’s disappointing that the concerned voices of East Norwalk residents are being ignored and this plan appears to be a forgone conclusion. I’m not sure who John Kydes has been listening to, but I’ve attended as many meetings as I could from the beginning of this process and consistently heard concerns about overcrowding our roads, our schools and straining our utilities.