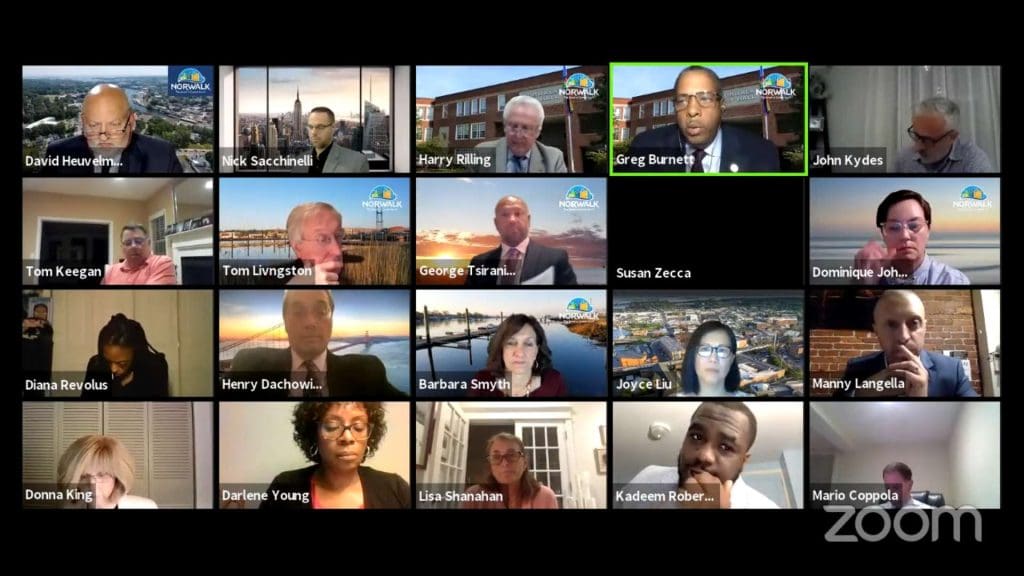 NORWALK, Conn. — A study to look at ways to improve the efficiency and effectiveness of both the City and school budgets took a step forward on Tuesday night after the Common Council unanimously approved a contract with consultant Evergreen Solutions Inc to conduct an “operations review and efficiency study.” The contract, which is set not to exceed $275,500 was approved by the Board of Education at its June 16 meeting.

“(This) contract is another example as to how we strive to manage our spending and continue to be good stewards of our taxpayer dollars,” Council Finance Committee Chairman Greg Burnett (D-At Large) said at the Common Council’s July 13 meeting.

Burnett, who worked closely with the city’s Chief Financial Officer Henry Dachowitz to get the study off the ground, said that this study aims to be a transparent look at the City’s finances.

Discussions about the efficiency study began last budget cycle, but hit some bumps along the way.

Dachowitz said that it was partially put on hold due to the fact that the district had a new superintendent join in the middle of the process, but Superintendent Alexandra Estrella, along with the Board of Education, pushed back on that characterization in a statement sent to NancyonNorwalk in February.

“The City launched an RFP this fall without input from the NPS or the Board of Education,” the statement read. “The RFP omitted the District as a key party, and did not include an equal review of functions for both the City and District. For example, the RFP included a review of educational technology resources, but left out a comparable up-to-date analysis of City technology resources. If the review is intended as a full analysis of potential areas for efficiency, Norwalk Public Schools must be an equal partner in the efficiency study. We have discussed with the Mayor’s Office our recommendations for moving forward in a way that is mutually beneficial.”

Burnett said at the July 8 Finance Committee meeting that “we expanded the contract to say City of Norwalk and Norwalk Public Schools…(the) RFP included both names, because we’re both contributing and have a say in this efficiency study.”

Estrella also said in an interview with NancyonNorwalk that while the study could bring about a more efficient working relationship between the City and the school district, but as far as reducing costs, however, she said “it could go either way,” since it might also reveal areas where more staff is needed.

In a June memo to Board of Education President Colin Hosten, Norwalk Public Schools Chief Financial Officer Thomas Hamilton said that both he and Hosten had served on the six-person committee that selected Evergreen Solutions and encouraged the Board to support the choice.

Council member John Kydes (D-District C) said that in order for this to be a fruitful study both sides had to be fully on board.

“If this study is to be successful, it must be with complete buy in and transparency by both the city and the Board of Education, otherwise we’re just gonna have another study that sits on the shelf and collects dust,” he said. “And I just want to point out to my colleagues here on the Council and on the Board of Ed that we are the checks and balances for the city.  So if at any point you feel that information isn’t flowing properly to this firm, and therefore, that a proper and good recommendation can’t be made, it’s your obligation to say something.”

Still, Kydes said that he was “optimistic” that the study would produce useful results.

“I’m hoping something gets provided information back because there’s a lot at stake with this plan, including education of our children, so I’m keeping my hopes up high, and hopefully at the end of this we’ll have some good information for both the City and the Board of Education,” he said.

Council President Nicholas Sacchinelli (D-At Large) said that he was grateful the study was moving forward and could be used to inform next year’s budget.

“This is the first time we’re gonna have a third-party firm reviwing our facts and figures and making sure that they’re informing us of those items that maybe we didn’t know,” he said. “So, I’m very optimistic of having something like this in place for the next budget cycle to be more informed than ever.”

Dachowitz said that they received 12 responses to the request for a consultant to conduct the study, of which four were asked to make presentations, and a final two met with Mayor Harry Rilling and Estrella.

“They have conducted over 800 studies since 2004,” he said about Evergreen Solutions. “They have done work in 46 different states. And I think we have selected a most competent firm that’s independent, specifically with extensive experience both as school administrators, as well as working with city finances, operations, the whole nine yards.”

Dachowitz said that the work should take about four to six months to complete so the city and Board of Education could get a report in early 2022.

We are indeed lucky to have Mr Dachowitz working for the citizens of Norwalk. He’s not interested in being popular he’s only interested in the facts. It’s sad that Ms Estrella continues to attack him.

Glad to see Henry Dachowitz is involved in this. Everyone seems to be using the word “transparency”….I hope that is true. I also hope politics doesn’t play too big of a role in this…IF so, taxpayers are counting on Dachowitz to be transparent about the process…I would hope people who are road-blocks to this “transparency” are called out.

Soon to be dusty next to the Blum Shapiro one that was never enacted on properly. We could have had 4 more crosswalks for this waste of cash.

If I recall, someone suggested this 3 years ago and was told that we didn’t need it. We just needed a new assistant mayor.