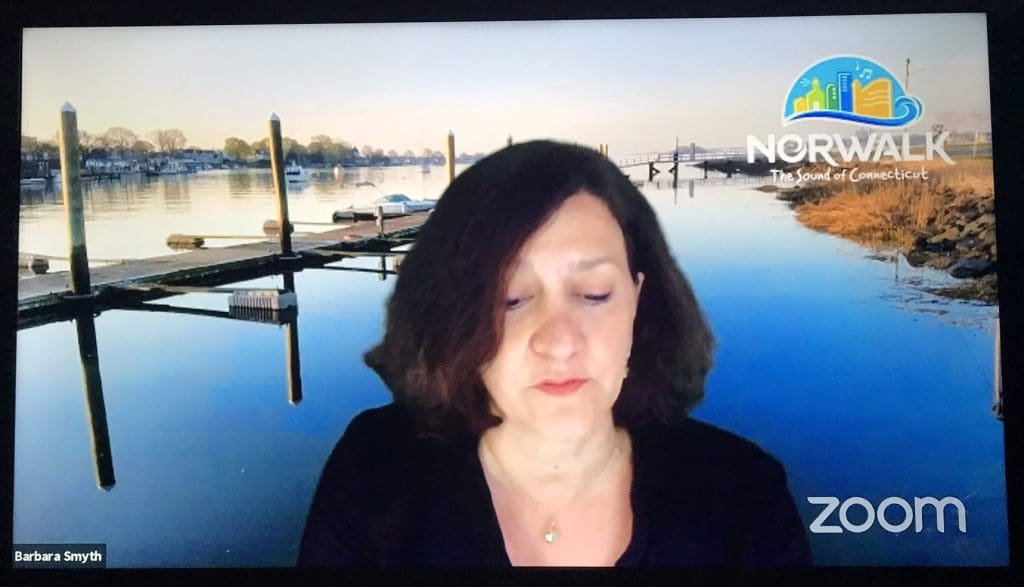 NORWALK, Conn. — The Norwalk Common Council has unanimously condemned “the senseless killing of George Floyd by police officers who are meant to protect and serve.” They “stand in solidarity with Norwalk’s Black community.”

“As leaders elected by the people to serve on your behalf, we recommit ourselves to actively listen and find more constructive ways to challenge racism and end social injustice in our city. At this pivotal moment, we also recognize that all children of Norwalk deserve to inherit a more just and equitable city,” the Council said Tuesday in a statement read by Council President Barbara Smyth (D-At Large), during its regularly scheduled meeting held on Zoom.

“This Council is committed to moving beyond just the statement. We want, and we need to see, action, and we want to be a part of it,” Smyth said, offering personal thoughts after reading the agreed upon words.

Norwalk has had two peaceful demonstrations inspired by Floyd’s death, and “I think we can all agree that the goal of the police department was simply to support and protect the protesters to make sure that we were able to do so peacefully and cohesively,” Rilling said. “…. I think, once again, Norwalk can stand proud and say we show the rest of the country, how to do things and how to do things in an appropriate way.”

Council members Dominique Johnson (D-At Large), Greg Burnett (D-At Large), Darlene Young (D-District B) and Kadeem Roberts (D-District A) had written the statement, and she had given it some edits as a Norwalk High School teacher, Smyth said.

“Norwalk’s diversity is its greatest and most precious resource, and it should be respected and nurtured. We in city government must work to ensure that we value and defend this diversity not just in words, but also in actions. We recognize that building a just community requires elected officials working with a coalition of people willing to do the work necessary to address systemic and institutional racism in our city.

“Our country is in a national crisis and our humanity at a crossroads as the Black community continues to deal with the residue of racism and injustice. As leaders, we commit to a process of deep self-reflection and accountability. We stand Norwalk Strong and join our voices in unison for change and in declaration that Black Lives Matter.”

Smyth said she agreed with Rilling that Norwalk Police had handled the protestors with respect.

“We recognize that our police department is many steps ahead, many other police departments and have been very willing to, and have, revised policies and established standards to eliminate brutality, but we do still have room for improvement,” Smyth said.

As a teacher, she has committed lessons “to shining a light on black oppression and social injustice,” because “what really feeds prejudice is ignorance,” she said.

“Education is one of the most important ways that we tackle the pervasive systemic and institutional racism that exists,” Smyth continued. “And it’s really incumbent on all of us to recognize that, from Reconstruction, to Jim Crow, to redlining, to our current Zoning laws, that blacks have been and are still being oppressed. After emancipation, oppression has only changed its form. And police brutality is really just a symptom of a much, much deeper problem.”

The protests have been incredible and have already brought change, Smyth said.

“I’m calling out the students who have, you know, led the way in the towns around us to, to really take it a step further,” Smyth said. “Talk to your parents, talk to your community leaders and demand change and fair, affordable housing in your towns. And that’s when we’re going to start to see a change in in the poverty that exists.”

Is this the same Barbara Smyth who was quoted 3 months ago that the coronavirus was a combination of the polio epidemic and great depressiin rolled into one? She obviously likes to talk in the extreme. I find it amusing that she claims to push for the African community while not holding state legislators (Her Democrat brothers and sisters ) feet to the fire on ECS/ELL funding. The lack of funding that has caused resources to be shifted away from African American kids in need. I don’t know. Politically, this comes across as someone who’s an opportunist. Veey much like a carpetbagger in the old South during Reconstruction. Maybe, just maybe it’s time to stop the BS and work quietly behind the scenes for progress. Is that possible for politicians to do?

Notice no diversity in politics, all Democrats

Our esteemed Common Council and its President should avoid making broad, all encompassing statements like “our humanity is at a crossroads” because, although we still have issues to resolve, all people are not racists and all cops are not racists. Maybe we should take Dr. Kings advise and judge people by the “content of their character” before condemning all of humanity. Making broad, overarching statements only makes us more divided.

@John Miller: I agree 100%. There are many thoughts that come to mind when thinking of current council. Many can not be posted. But I think immaturity describes some not all of current members. Hyperbole should be left to the tabloids.