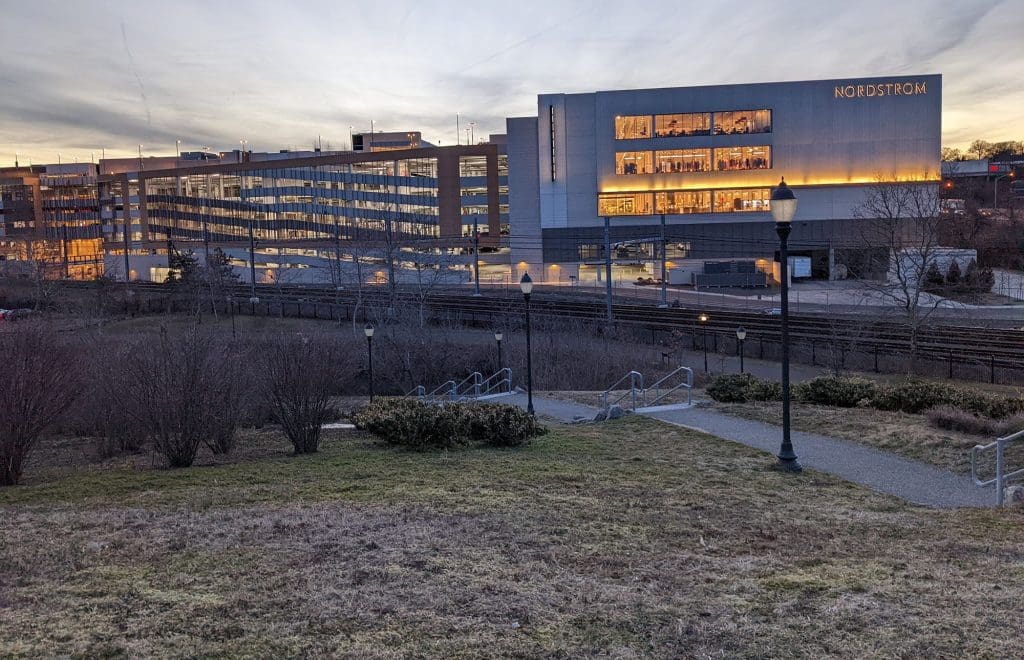 Norwalk Community College will save some money on signage by repurposing the “N” from Nordstrom.

Editor’s note: This story was published on April 1, known to many as April Fools Day…

“In this our sixtieth year operating as a community college for Norwalk, we are pretty excited about this new opportunity.  The details are still being worked out, but April is National Community College Month, and we didn’t want to miss the chance to make this important announcement,” said DeVonish in a statement.  “It’s really an extraordinary facility – have you seen how much parking they have?  It’s amazing!”

A Brookfield spokesperson stated, “The retail mall business is just too hard now.  Everyone buys stuff online from Amazon and occasionally other vendors and then goes to Costco for other stuff.  We have to throw in the towel on this one.  Besides, we never really considered the Norwalk location to be a Brookfield property – it was acquired when it bought General Growth Properties in 2018 and Norwalk already was too far along.  We’re just happy that we can partner with Norwalk Community College to complete this transition.”

NCC Dean of Students, Dr. Kellie Byrd Danso said, “We have very big plans for our new East East Campus facility.  It’s a pretty long list, but I can share a few things.  For a long time NCC has considered developing a program for Retail Science and Technology.  Now we can – and what better place than a former retail mall?”

She continued,  “We also have had discussions with members of the local real estate community to develop a program focused on Real Estate Science. These discussions will continue, and we hope soon to offer an inaugural class taught by visiting professor Jason Milligan. And, after the Pinstripes lease runs out, we intend to convert that space, including the bowling alley, into a student recreation center.  There are many, many more exceptional opportunities we look forward to announcing as the month of April unfolds.”

The property transfer, which is subject to the approval of Norwalk’s Redevelopment Agency, is expected to close on or before April 1, 2023.

Yes, Virginia, there is still an April Fool’s Day.

This article, as NancyOnNorwalk’s most astute regular readers quickly recognized, was the latest installment in our annual April Fool’s parody of civic events in our fair city. We apologize to any readers led astray by our annual prank, as well as to Norwalk Community College leader Kellie Byrd Danso and others whose comments and actions we invented for this entirely fictional parody.

I read in amazement and the remembered the date.

So I’m confused. Is the mall going out of business?? Because my 1st thought was thought was who opens a college inside of a mall.

No one saw this coming. We all speculated it would be a casino

April Fools to you too!

Nancy, you almost had me fooled.

The joke is that this is probably a better use of the space for the community than the actual mall… just imagine if we infilled around the mall, maybe finally got some ground-level retail in those Water-street properties… it’d actually work.

The mall was a terrible idea. Its another POKO, Walkbridge, Duff Idea. Take my advice on Manresa. Fix all the problems with Norwalk by replacing Duff. Manresa is a gold mine if converted to a natural gas plant connected to long islandand converted to a hub.

You got us good! Well done we believed it 100% for about 1 full hour. Kudos to The author and NoN. Guess we’ll go to the mall today!

Wow, who saw the new “supermall” closing….only everyone, happened a bit quicker than i expected

Is this an April Fools joke?

Every time I passed the SONO mall when it was being built, I always said, it would make a good location for NCC.. Just didn’t think it would happen so fast.

Is this an April Fool’s joke?

Can’t say I’m surprised. Surely Brookfield knew that people have been buying online for years and that malls were not doing well. Great idea to have NCC take the space

Well this was predicted by all the Facebook pundits. And he’s right, the amount of parking IS amazing! 🙂

Is this an April Fool’s joke?

In September of 1963 it became apparent to me that I could not afford to attend the private university into which I had been accepted. Were it not for Norwalk Community College, then in its third year, at best I would have lost a year. At worst, I might never have gone to college at all.

Instead, I spent a year at NCC, then a year at the Stamford Branch of UCONN, ultimately graduating from the main campus at Storrs. After 2 years in the Army, I earned a Master’s Megree from the University of Southern California.

NCC in 1963 was pretty bare-bones. I don’t recall how many of us there were, but it wasn’t many. Classes were held in Brian McMahon High School. The “Student Union” comprised a small section of the school’s cafeteria.

I am eternally grateful to the City of Norwalk and the State of Connecticut for having been “rescued” by NCC those many years ago. in the interim I’ve taken great satisfaction in watching the college flourish. I am especially pleased now to learn that it will expand into the SoNo Collection building.

We’re very fortunate to have such a valuable resource available to us.

Is this an April Fool’s stunt? Can’t find this on any other news site — or even on the NCC website for that matter. Really not funny if it’s intended as a joke.

This story would be more believable if you said a casino was going to open in the mall site.

Nice scoop, Nancy. You are the only news source I’ve seen at this point with a published story about this.

We’ve got to keep our sense of humor.

In our ever more high tech world where getting a 4 yr college degree in the technical fields is the entry to securing the American Dream Norwalk expands its 2yr CC to another site. No surprise City Leaders are not encouraging a 4 yr college Norwalk – CT’s only City lacking one.

Everyone of our 3 impoverished cities – Bridgeport, Hartford and New Haven – have 4 yr colleges. But not Norwalk. Most of our public school grads don’t secure 4 yr college degrees (CT Edu Dept data) nor secure degrees meeting CT public school graduation standards. So we’re marching to a different drummer in Norwalk where the community has no need for a 4 yr college. Sigh. Anyone ever ask students if they’d be helped with a local 4 yr college ?

Lets get started building/repair public schools. Everyone knows new/rebuilt schools is what’s needed. Not public schools committed to teaching every student to meet the requirements of CT public education degree. That’s for our surrounding towns. Where new comers seek out public schools that meet and surpass Ct Edu Dept standards.

So with a fairly stable population and one CC while all other CT cities have 4 year colleges Norwalk is doubling its CC space. While most of our kids neither secure 4 yr college degrees nor meet Ct Edu Dept graduation requirements. Makes sense. But only for Norwalk where education has issues.

Would it have been too much of a reach for Sen Duff and City leaders to ask why a 4 yr college could be developed ? Not enough public school grads likely to qualify ?

Typical. Norwalk gets a nice mall that appears to be thriving and now it’s going the converted to an NCC campus. I think it’s a shame.

Aprils Fools!! Jason Milligan teaching was the give away…

it’s an april fool’s joke for anyone confused

I never liked pranks. Jokes are fine, if they’re funny. This is just kind of… hurtful and inflammatory? Especially given how many retail jobs were lost during the pandemic. And how I myself as an NCC student suffered a great deal by only being given the “online learning” options for the past 3-4 semesters. Call me a Debbie Downer, but this joke gets a failing grade.

She should save this article – will be true soon enough. Another Norwalk bad decision

The number of cocktails John Levin needed to conger up this farcical fable? Likely 5 doubles

The amount of time it took to write and post it? Maybe 30 minutes plus 5

The fact that Peter Berman didn’t get the joke? Priceless.

Anyone remember discussions a decade ago that a major mall would bring unparalleled prosperity with good jobs to Norwalk transforming our long shabby Downtown ? Now we’re in another decade learning how a “wall to wall apartments brings growth”. What next will our City Hall savants next propose ? Maybe moving City Hall to Downtown where it belongs ? A few nice parks ? Maybe an office building to change Norwalk’s skyline ? A new school ? More apartments ? As long as we discourage major firms bringing good new jobs we’ll enjoy “staying as we are”. It’s the story of CT itself. It’s why no ones really upset with a decade long economy.

This article was cleverly written. I can’t believe how many people fell for it. Bravo job well done

Norwalk has done a beautiful job expanding NCC on Richard’s Avenue and the mall is a welcome addition if only Target would take over the Bloomingdales space! and turn some of the space into more restaurants. Next up, take down that hideous Manresa eyesore that ruins everyone’s view and turn the island into a wildlife preserve.

Seems like this April Fool’s joke article was taken down from 4/2 AM until this evening. I’d venture to guess this did not go over well with NCC/mall owners (Brookfield only operates the mall since Fall 2019) as it’s headline is now forever in Google as “real” news. I have many other comments about judgement, context in today’s world, etc. that I’ll keep to myself. Unfortunate.

That was not a nice April Fool’s joke. I am very happy that Norwalk has a beautiful mall to shop with a variety of stores and two great anchor stores. Thank you Norwalk.