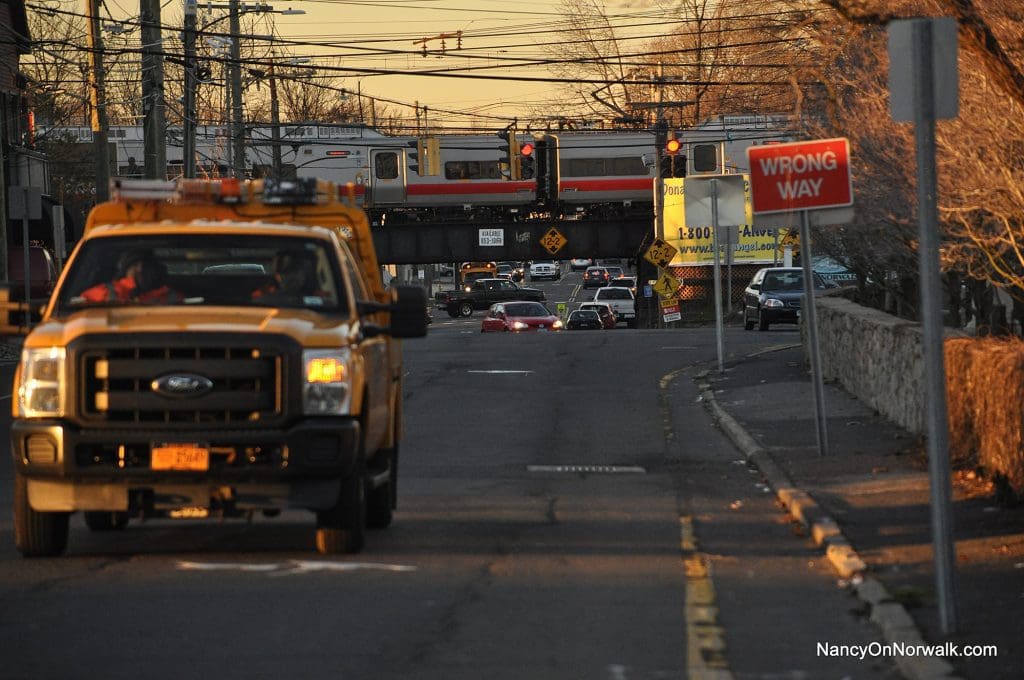 Overnight closures are expected on East Avenue, as part of replacing the railroad bridge and lowering the roadway. (Archive photo)

NORWALK, Conn. — East Avenue will need to be closed overnight up to 90 times at the railroad bridge to replace underground utilities, according to the Connecticut Department of Transportation.

Recognizing that this could cause considerable problems, the Norwalk Traffic Authority indicated Monday that it will limit the closures to off-peak periods, such as not on a Wednesday evening when there’s a concert at Calf Pasture Beach. Not on Memorial Day weekend, not on Labor Day weekend, and hopefully not in July and August.

“If we were to say there’s a ‘worst time of year’ to close that underpass, it would be July, August and September,” Diane Cece of the East Norwalk Neighborhood Association (ENNA) said to the Authority, at the outset of the meeting. She called it “unsettling” that the request had only been made Thursday and the Authority could be voting to approve the detours.

ConnDOT is working to replace the Walk Bridge, the aged railroad bridge over the Norwalk River, and has wrapped other railroad bridge work into the project. This includes the East Avenue bridge: the roadway underneath will be lowered to increase vehicle clearance and the train platforms will be extended as the bridge is replaced.

The expectation that construction will start in July and ConnDOT, in working to finalize its project plans, recently realized that it needs to close the road, Senior Civil Engineer Vanessa Valadares explained.

“Some of those structures are so deep that it will be very hard to put a trench in and keep traffic passing by right next to it,” she said.

ConnDOT wants to close the road from 8 p.m. to 6 a.m. some nights and some weekends, thusly:

This would not be 90 days of consecutive closure, Valaderes emphasized. They would be intermittent because the contractor will work on one utility and then continue down the road, coming back to do another utility.

Rich Bertoli, Supervising Engineer at WSP, said the closures will take place over 2.5 years. Though there’s no exact schedule, they have to occur between spring and fall because that’s when you can pave.

“Of those of the 12 weekends, that’s approximately only 13 percent of the weekends of that two-year period. So it is a very low amount,” he said. “And I believe the department is willing to work with the city, you know, if there is a concert on a weekend or something else, we can definitely be flexible. We just need to know enough ahead of time.”

“We’re looking at only 12 feet of clearance under the bridge, and it’s only 30 feet wide. And some of these utilities are over 10 feet deep, which really limits the work,” he said.

Pedestrian and bicycle traffic will continue so that no one misses their train due to the work, ConnDOT project manager John Hanifin wrote. He suggested a Fort Point Street to Van Zant  Street detour.

“Weekend closures would provide a longer duration for the Contractor to complete activities requiring deep or wide installations and to restore traffic over the complete work,” Hanifin wrote.

“I think we need to notify the East Norwalk Association or the public as with as much as many details as we possibly can, number one,” Mayor Harry Rilling said. “Number two, I do have some serious concerns about a summertime closure from Friday night until Monday morning. During beach season, we get people coming off of I-95 going into the beach or wanting to go into the beach, and this will reroute them through various (highly residential) roads.”

The Department of Public Works will coordinate with ConnDOT to make sure signage is posted, and just went through this on North Water Street and Osbourne Avenue, Valadares said.

“Really this is our busiest time of the year for that whole area is the summer. So I wonder what alternatives there might be and if there was other options that were explored,” Traffic Commissioner Kelly Straniti said. She also emphasized public outreach.

Safety is number one but also, this will expedite the East Avenue work, Valadares said. There are three phases:

“Not in that order necessarily,” she said. “…Sometimes allowing a closure, yes, it is not the best for the neighborhood for a few days, but in the long run, it will be the best solution because we probably can cut a lot of time at the end of the construction schedule.”

Rilling said he understands that there are multiple entities that need to coordinate on the project.

But, “Our experience has been that generally we approve something. And then it turns out to be a lot more than what we anticipated. And we get people coming back to the table and asking us for extensions, more time, more closures, etc.,” he said.

He suggested that the Commission prohibit closures on the holiday weekends and, “this may be very difficult, in July or August.” The City would be open to allowing work during July or August if there’s a “critical need;” he said, “We would then be able to talk about accommodating you.”

The Authority voted unanimously to table the request to November. Rilling requested that ConnDOT make a “concerted effort” at public outreach.

“I don’t see a problem with going out to the public with an information meeting,” Bertoli said. “And I will have to get back on the impacts of the schedule of not having those two months. I believe that is reasonable, and will work.”

“ConnDOT wants to close the road from 8 p.m. to 6 a.m. some nights and some weekends, 90 nightly closures, 12 weekend closures…. This would not be 90 days of consecutive closure..” well at least it is after regular hours. but 90days surely this can be completed in 30-35 days? idk SO LONG DOES NOT SOUND SAFE

Just another nightmare for the residents to of East Norwalk to have to deal with. But gee let’s let tractor trailers go to nordons and let’s keep building more apartments to clog the roads even more. Good work

Just close it down completely, work it 24/7 until it’s completed. Seems like that’s a better idea when closing intermittently through the summer.
Let’s be honest, Covid just still going to be a thing next year. What concerts is Norwalk talking about.
Close down the underpass until the job is complete. The same thing was done at Atlantic st in Stamford.