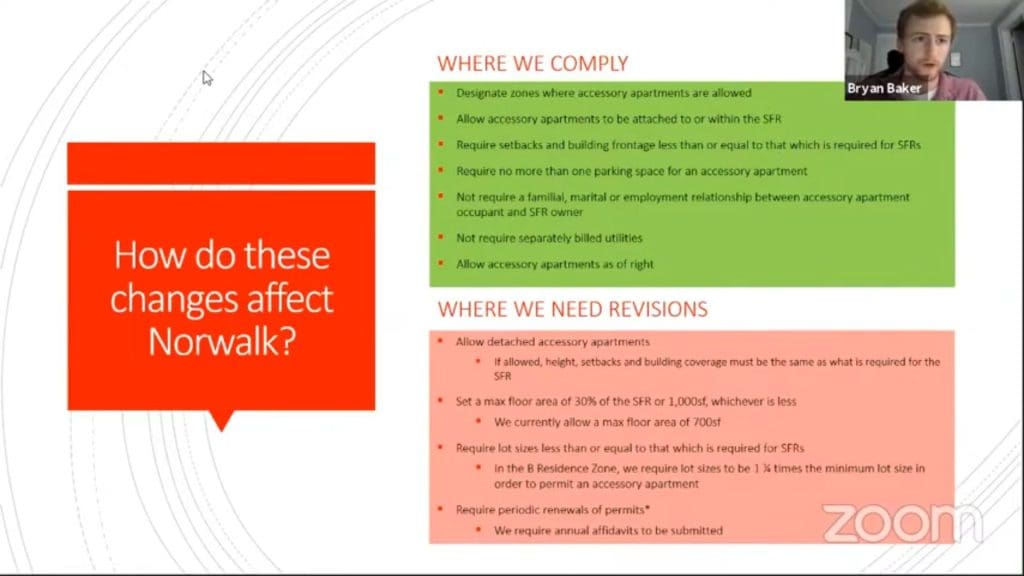 NORWALK, Conn. — Norwalk is likely to attempt opting out of new State legislation on accessory use apartments. Not because Norwalk objects to “ADUs” but because the City already its own legislation to allow accessory apartments, which might need a tweak but not to be overridden by the State version, Zoning Commissioners said.

Public Act 21-29, which revises a section of Connecticut zoning statutes, includes a definition of accessory use apartments. “If you don’t opt out, this state statute becomes your minimum regulation, meaning you cannot be any stricter than that ever,” Principal Planner Bryan Baker said at last week’s joint Planning and Zoning Commission meeting.

While there’s a feeling out there that the new State legislation will help address affordable housing needs, Norwalk’s experience doesn’t indicate that’s likely, Planning and Zoning Director Steven Kleppin said. The city has been allowing accessory apartments “in a pretty similar form,” and there are only something like 300 approved.

The bill requires that accessory apartments as described by sold or rented as affordable for folks making 80% or less of the median income, meaning not more than 30% of the tenant’s income, for at least a decade. The bill became law Friday. A municipality can opt out of changed parking requirements by holding a public hearing and subsequently achieving a two-thirds majority on its legislative body in favor of opting out.

“I think it is a bit of a funny contradiction” that Norwalk would opt out and make “pretty small changes” in the statutory language, leading folks to think Norwalk is rejecting the accessory apartments when in reality, “we’re way ahead of the curve on things like ADUs, which are pretty popular,” Zoning Commissioner Joshua Goldstein said.

The big difference is the State version allows detached apartments, while Norwalk only allows them within the home, he explained. The State allows apartments at the same maximum height for a house, 35 feet, but the floor area restriction probably negates that, he said.

“As the statute reads it’s 30% of your house or 1,000 square feet, whichever is less. Right now, we only allow up to 700 square feet,” he said. “So with that restriction, you’re probably not likely to see 35 foot high accessory apartments, but I would never say never in the world of zoning.”

A garage can’t be more than 15 feet high, he said.

“We require you to submit an affidavit just to say that you’re still using your accessory apartment, or that you’re still renting it out. Whether that’s technically periodic renewal of your permit, I think is yet to be determined,” Baker said.

Planning Commission Chairwoman Frances DiMeglio said detached apartments, like over a garage, would be very helpful for families trying to take care of loved ones without putting them in assisted living.

You can opt out and still have detached apartments, Baker said. The local regulation needs to be changed and perhaps the maximum height could be 20 feet.

“Most garages are in between 12 and 15 feet high measured to the midpoint,” Baker said. “So you know, your peak, you’d maybe add three or four feet to that. So reasonably, if you were going to put something that has enough headroom to have an accessory apartment, you probably be looking, you’re looking more at 20 feet, in order to kind of have your 10-foot first floor for your garage, and then your 10 feet for the for the apartment.”

“They can be detached if they’re done tastefully,” Kleppin said. “…We just don’t think the language as it’s written is great. And we could probably add a few safeguards and still get the same result.”

The proposals would likely go to public hearing, Kleppin said. Opting out would require a two-thirds vote by the Commission and the Common Council. 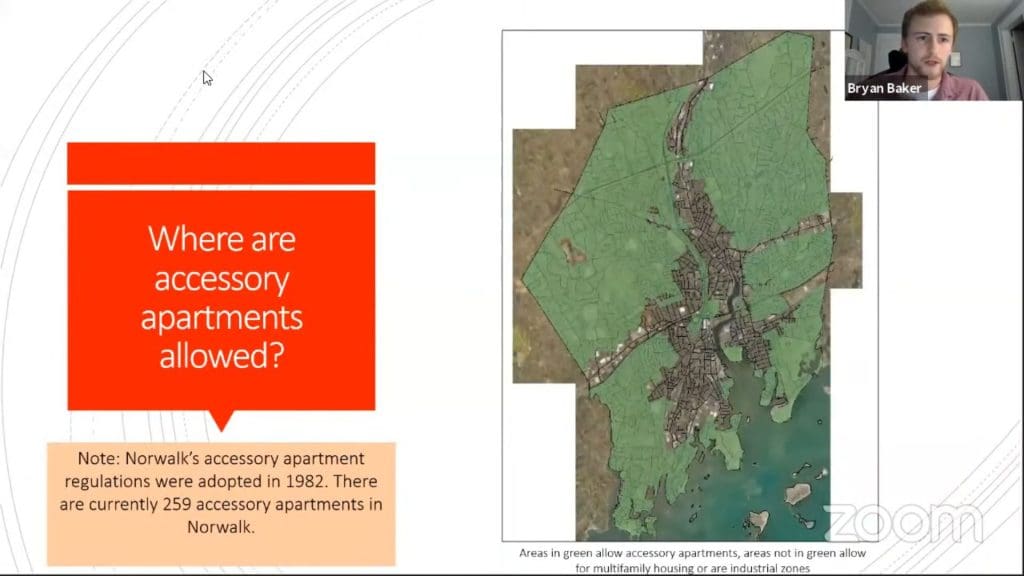 Nancy, you appear to have missed this, though: What is the bar for opting out? Does Norwalk have to do anything for the state to grant it to us, or is the opt-out “by right”? Just wondering what kind of teeth the state law actually has.

700 sq ft is unnecessarily constrictive for an accessory apartment and might well explain the small number of such apartments currently approved in Norwalk. The 1,000 sq ft allowed by the state legislation is much more reasonable and I believe would result in many more applications and approvals than are currently in effect. Further, the restriction on detached apartments seems arbitrary to me. I suspect that removing that restriction would similarly result in a significant increase in the number of available accessory apartments.

Increasing available housing seems like a laudable goal to me — a goal Norwalk’s current rules subvert.

Our zoning commission is very out of touch with the public and works to promote its own agenda, not the agenda of the taxpayer but the administration.

@Ken P, pray tell, share with the class what “the agenda of the taxpayer” is? How many public surveys have you conducted about this?

I submit that practically all of our local government is broken. Complaints like Ken’s are based on his own spurious bias.

I’d also submit that despite my snarky comment, the only “survey” that matters is the ELECTION. Let’s talk about that, why don’t we? In 2019, the mayoral turnout was a shade less than 18%! If Ken thinks the administration doesn’t serve the public, this is EXACTLY where that STARTS. Rilling is indeed serving only 55% of that 18% of the public.

Why on earth do we have our mayoral elections in odd years, when turnout is weakest? Why don’t we have mail-in balloting and automatic voter registration? Why do we insist on sticking with obsolete voting rules like First-Past-The-Post instead of embracing newer, better methods like Ranked Choice? Why don’t we have multiple members per council seat district, which allows the results to be more proportional and geographically diverse?

Face it, Ken. Our government was broken long before Rilling and P&Z came along.

The time has come to up the square footage allowed on accessary units and allow them to be located in an accessory structure w/increased height (like a detached garage). This is great for senior and college students and will create lots of de facto workforce units – and allow residents to potential earn a little extra income from rent.

However, this has the possibility of creating some parking issues and I continue to believe a neighborhood parking pass is necessary in certain neighborhoods (and I would limit the number of passes per residence to 1 (maybe 2 if a study showed capacity?).

The Zoning Commission has not been blind to the need for this type of housing, but many residents come out in opposition to increasing accessory units believing they will negatively impact the character of the neighborhood and create parking problems.

The allowing of accessory apartments, particularly for seniors, should be applied to Condos and PUDS, overriding rules of the associations.

@David: I’ve voted in this town for a few years. Voting can’t be made any easier. I think my average wait over the past twenty years is 5 minutes, which by the way gives me the opportunity to look at my wife next to me and realize how TREMENDOUS she looks on Election Day every year…If someone in Norwalk doesn’t vote it’s because they are apathetic and lazy. There is literally no logistical reason not to vote. Going to vote gives one a sense of pride fulfilling one’s civic duty. I feel sorry for those who are too apathetic and lazy to understand that feeling. Maybe they should look in the mirror, turn the cable off and get their ass down to vote. They’ll be happy they did..I will too…
Should we always have to cater to the lowest common denominator in our city? Holy Cow!

There are 259 accessory apartments in Norwalk, Baker said.

I guess that means there are 258 units on the tax roles. I guess that excludes the several hundred units that are illegal or not registered. It also exclude a few more hundred that have multiple unrelated people living in a single apartment, or multiple families living in a single apartment- each in a separate bedroom with a shared kitchen or bathroom

Bottom line
Residents need services- parks, schools, wear and tear on roads, sewers, etc. if you shoe horn more residents into a single family home or apartment without a corresponding tax increase equal to the services required- you need to spread the costs- and higher taxes onto all others

Norwalk is way behind the times. Detached garage studios are long over due. Circular driveways way behind on. Norwalk lacks the vision needed in zoning. The reason Norwalk opposes anything is because zoning has no clue on how to enforce illegal use. Our legal department plays games and our zoning department lacks a backbone. If they enforced illegal uses and focused on better zoning it would be a more affordable town and you wouldn’t need all these crazy and tacky new apartment buildings going up.