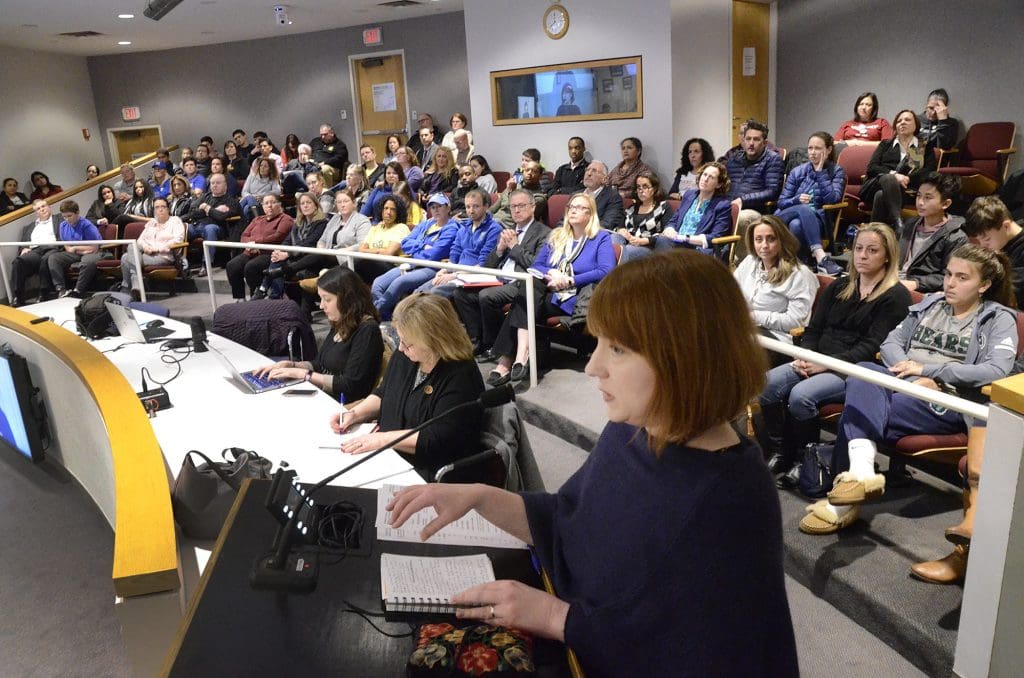 Norwalk Board of Education Chairwoman Sarah LeMieux speaks to the Common Council, Tuesday in City Hall. She said, “I am, and I don’t usually speak on behalf of others, but the Board and Dr. Adamowski is, 100 percent in support of an audit, or an efficiency study to be done for the budget of NPS.

NORWALK, Conn. — Norwalk Common Council members on Tuesday authorized what they said is the biggest funding increase ever for the Board of Education, after a series of citizens said the dollars involved would fall short of what is needed.

The Council unanimously voted, with one member absent, to allow $368,763,931 in total appropriations, or $385,630,101 in total spending less intergovernmental grants of $16,866,170. This provides for a $9.9 million increase for Norwalk Public Schools and factors in an expected $8 million decrease in what is said to be the largest Rainy Day Fund in the state.

Missing from the discussion was any attempt to half the $9.9 million increase, as Council member Nick Sacchinelli (D-At Large) suggested last week. Rather, both sides announced that they’d agreed to an audit in the hopes of finding efficiencies that will save money.

To be clear – the Council sets the budget cap. The Board of Estimate and Taxation will work in the coming weeks to set budgets on the City-side and then allocate money to the public schools. The Council then has the opportunity to raise its cap in April with a two-thirds majority vote.

The Council chambers were full, with some people standing in aisles, as 24 speakers came to the lectern, almost all advocating for education funding. Initially there were accolades from new residents for the strides NPS has made, then references were made to “Groundhog Day,” the time of year when parents perennially come out to fight for the schools.

“I’m not a financial expert. But when I look around Norwalk and see all of the growth, the apartment buildings, the mall, new retail centers, I wonder how can we be in a position when we can’t fund our school budget? …. It’s embarrassing,” Meghan Hopkins said, earning applause.

Sacchinelli, at that meeting, had mentioned a gift card fiasco made public recently by Chief Financial Officer Henry Dachowitz, an allegation that NPS awarded gift cards to teachers only to have the cards expire one week later, unspent.

“I’ll ask this body, where is the budgetary fat? Because if you’re just throwing out a couple of things, that is what we lawyers call muddying the waters. If you don’t have a good case, you muddy the waters. You have a good case you speak in the facts,” Eric Niederer said.

“I was pretty disappointed in the new finance director’s comments,” Adam Blank said. “I thought they were way over the top and I hope and trust that that’s not going to become standard fare here in Norwalk. I don’t think that’s productive for ‘Board of Ed’ or for the City-side.”

Board of Education Finance Committee Chairwoman Barbara Meyer-Mitchell again urged the Council to support the schools.

“The unprecedented growth in enrollment is a situation that demands proactive planning and is the elephant in the room that displaces the budget goals NPS has developed… In order to sustain our current per pupil expenditure and avoid cuts within our school buildings. It is imperative that you support the schools to your best capacity,” she said.

Funding the entire BoE budget request would require $18 million more than was initially approved for 2019-20. The Council in December authorized a $1 million special appropriation for English Language Learners (ELL).

Gloria Neiderer read a letter from the Fox Run Elementary School Governance Council, asserting, “If you decline to fund the current budget request, not only would we not see the additional funds that we are requesting and desperately are needing, but we also will be forced to cut essential jobs, programs and supports that are currently in place.”

“Our taxes go up and yet where do they go? The Rainy Day Fund,” Michelle Robinson said. “It’s more than a rainy day when our children cannot get the things needed to help them strive to be the best they can and get the best education they deserve. It’s a rainy day when all is done is cut things from the schools that will help enhance our students’ education.”

A Rowayton Elementary School second grader was one of three children to speak to the Council.

“I love my school,” Ellie Griffin said. “Please do not cut funding for Norwalk Public Schools, if you do, schools can lose teachers and programs. Children are the future of Norwalk. Instead of cut funding from schools, find ways to make schools better for us.”

Mayor Harry Rilling responded to comments about the Rainy Day Fund, or general fund balance, by pointing out that the $69 million figure that’s mentioned is what was calculated by auditors as of July 1. A $6 million drawdown is part of this year’s budget, so it’s actually $63 million, he said. The plan to use another $8 million will make it $55 million.

“The Mayor’s statement about the fund balance being $6 million less than what it was on July 1 is wrong,” Kimmel wrote in a comment on NancyOnNorwalk. “It assumes there has been zero growth in the FB during the first seven months of this fiscal year. Because the FB constantly changes, the only number that counts is the July 1 number. In theory, we could draw it down $6 million, but still end up with a level that exceeds $70 million next July 1.”

“It’s there to help mitigate market fluctuations, such as essentially what we see in the stock market or last few days, right? It’s there to maintain our credit rating as a town,” Langella said.

“Look what happened the past two days to the stock market – 1600 points down in the past two days,” Rilling said. “We don’t know what trend is going to continue. Everybody’s predicting, all the analysts are predicting a recession.”

He later clarified that he meant “overfunded” relative to the City-side of the budget.

“We put a lot of money into them,” Council member Tom Livingston (D-District E) said. “We put more money into both the operating side and the capital side than any other Councils have put together probably in Norwalk’s history. So I think it’s really important to put in perspective what we’re talking about. We’re not talking about cuts, we’re talking about the size of the increase.”

Sacchinelli said he’d been “demonized” over his comments last week.

“Ultimately, I was asking why that money didn’t go to the kids,” he said. “From an administrative capacity, the Council can only set the cap. That’s it. I can’t talk about any line item distinguishment. I can’t dictate where any of that funds goes.”

And, “I’ve supported every budget, year after year,” he said. “But at some point, it’s unsustainable. We can’t keep adding increases. I never suggested a cut. I offered an alternative increase. And I asked for accountability for where that money was going.”

“I’ve been really torn with this budget,” Council member John Kydes (D-District C) said. “The numbers are higher than I’ve seen in my tenure on the council. I will say I don’t believe this level of spending is sustainable.”

“You know, a number of years ago, we had an administration that really cared only about really breaking the teachers union and we were flat, flat budgets year after year after year,” Council President Barbara Smyth (D-At Large), a teacher, said. “It was bad. It was really bad. And we have come so far under Mayor Rilling, and his commitment to education. It’s like nothing I’ve seen in the city.”

The parents that are protesting for more money should press the mayor about marketing Norwalk as a sanctuary city. Why do you think we need more money for schools? Why is he not using his Democratic connections in the state to get more funds? St Joe’s is adding a second bus that will pick up kids in Norwalk next year for high school. Isn’t that a shame? I am 4th generation in Norwalk and sent all 4 of my kids to private school to avoid the nonsense that goes on here. Poor management at its best. Gift cards that expire ten days later!

John Kydes seems to say the same thing every year while voting for large budget increases. I think he told the Board last year not to expect much in the near future. Barbara Smyth seems to think Norwalk is really the Latin term for New Canaan. How many of these concerned parents have called or written their state reps regarding the real resource issue in Norwalk? The freaking ELL crisis. I would bet Zero! If Barbara Smyth is a teacher then she should publicly come out and discuss the impact this crisis has caused and why our state reps need to step up (OR step out) As far as rainy day fund – If you don’t think there won’t be special requests by schools next year for addl unforseen expenses to the tune of $5-6 million you’re living on a different planet. The Mayor needs to bether explain our entire balance sheet. We may have some cash, but we have large liabilities. Michelle Robinson needs to understand just because someone has money in a savings acount they’re not wealthy if their credit card bill is greater. The Mayor needs to educate people on this. Some people seem to think money grows on trees, I’m not one of them. Someone should read up on Hamden,Ct and report back. That’s where Norwalk is headed

The Mayor’s statement about the fund balance being $6 million less than what it was on July 1 is wrong. It assumes there has been zero growth in the FB during the first seven months of this fiscal year. Because the FB constantly changes, the only number that counts is the July 1 number. In theory, we could draw it down $6 million, but still end up with a level that exceeds $70 million next July 1.

An audit will not reveal the underlying, presumably personnel issues that may be driving up costs.. how about conducting a thorough review of the personnel and inter-workings within the district. You had a part-time union leader filing a lawsuit rather than a grievance due to fear of retaliation. Unfortunately as the city looks for transparency, many working within the district have no voice. Is the BOE interested in getting to some of this info, or at least digging deeper.

Also, doesn’t CT have a gift card law that prohibits vendors from imposing expiration dates.. what kind of cards were bought?

As a resident and tax payer in this city for almost thirty years I do not recall ever being asked to vote on being a sanctuary city. Do we not have any say in how our money is being spent? They need millions more for illegal children brought to this country while our children have done without for years…now we need special teachers better classrooms etc … explain to me how this is acceptable… It’s not the kids fault it’s our fault for not enforcing immirgration laws.

It was startling to hear the woman from Fox Run say that they were STRUGGLING to teach reading, printing and arithmetic to their elementary school children. And over 90% of their kids were under performing in arithmetic,

What’s the problem? Could it be teachers and the students don’t speak the same language… Duh!

1950 and 1960 teachers successfully taught the three R’s to grade schoolers with over thirty kids in a room, black chalk boards and 90 day summer vacations. No problem.