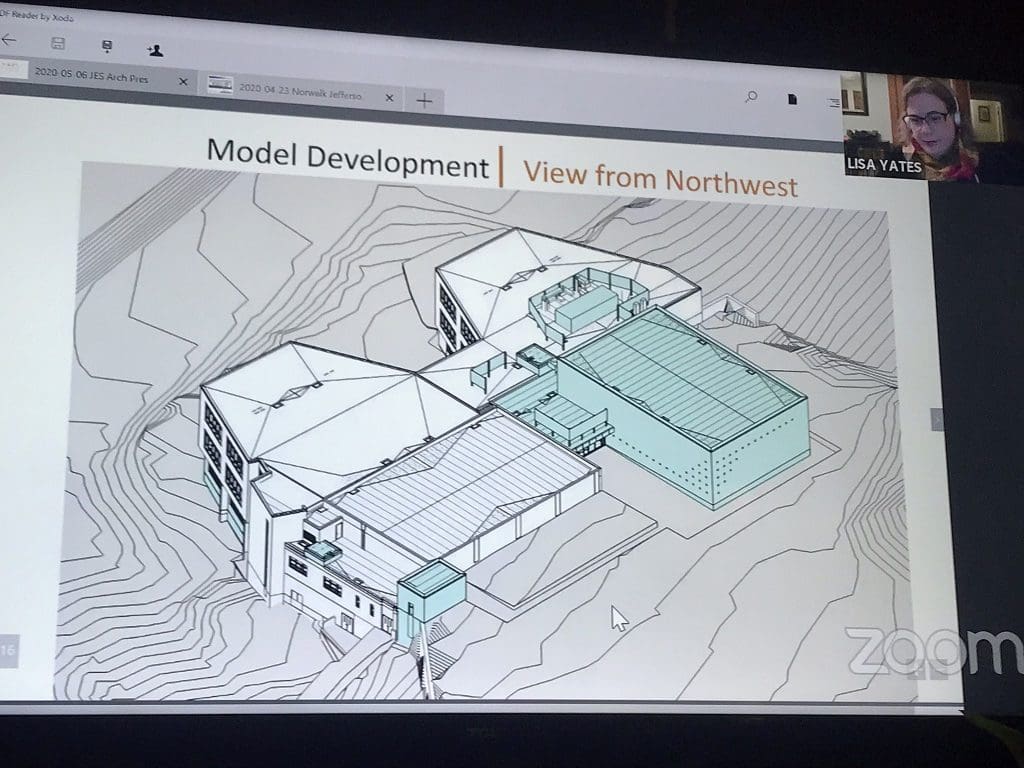 NORWALK, Conn. — Design plans for the Jefferson Elementary School renovation are on track to be complete by the end of June, with construction to begin early next year.

The Common Council Land Use and Building Management Committee got an update on Jefferson and other school projects Wednesday, focusing on Jefferson’s energy savings plans in response to pleas from activist Diane Lauricella. The new Norwalk High School project did not advance, in a move that was described as a technicality.

Jim Giuliano of Construction Solutions Group, the city’s project manager for new school construction, said he’s putting together grant applications for the Naramake Elementary School kitchen, Cranbury Elementary and Norwalk High School, and will be ready to submit them to the State by the June 30 deadline.

But the Committee tabled authorization of schematic drawings for Norwalk High School, and the authorization to submit a grant application for the project. Committee Chairman Thomas Livingston (D-District E) said there was no point, given that the legislature ended its session Wednesday.

Special legislation is needed for the promised 80 percent reimbursement for project, Lo explained. It was thought this would happen in April but due to the pandemic, it will likely take place in June or July.

“By not approving this tonight, doesn’t mean that we’re not going to apply for it,” Lo said. “I mean, all we’re saying is that we were delayed because of their schedule (getting) pushed over.”

The Cranbury project has a June 30 deadline, but the Norwalk High School project “is the last year’s money and then we need a special appropriation, a special legislation to get approval,” Lo said. “…The state’s going to delay this, so the submission date is going to be delayed for this project.”

“Hopefully, we’ll have more information at that point,” Livingston said. “I mean, it could be moot for all we know. If they have a special session and don’t approve it.”

That makes sense because it will be submitted in 2020-21, not in the current fiscal year, Livingston said.

“We’re not saying we’re not going to approve it. It’s just at this point, it’s not timely,” Livingston said.

Work at Ponus Ridge Middle School has accelerated given that the building is empty and the project will be done a little ahead of schedule, Building and Facilities Manager Alan Lo said. But any savings are counter balanced by COVID-19 expenses, such as having medical staff present to check on the workers health before they enter the site. It’s also cleaned daily.

Numbers are not yet available, he said.

“We’re going to have to see how that plays out,” Giuliano said.

The Jefferson plan did not include windows along the side of the new gymnasium that’s planned for the upper level, an idea that was floated in early February.

Architects are striving to reduce the water leaving the site and have planned security enhancements, such as a “mantrap” off the entrance, two vestibules that allow pedestrians in or out. Security will have an office adjacent to the entryway.

Livingston read a statement from Lauricella to begin the meeting.

None of the school projects have optimized green building design and solar energy design opportunities used by many other Connecticut towns and cities for nearly a decade, Lauricella said. She asked that the projects be tabled to incorporate solar energy generation, including through solar panels over car ports, and to second opinions from other consultants.

Eric Gebrian of Consulting Engineering Services (CES) addressed those concerns, calling photovoltaics “much more viable” than geothermal heating and cooling because the photovoltaic prices are dropping rapidly. Geothermal systems would involve drilling 90 boreholes about 500 feet deep and would cost nearly $1 million more than photovoltaics and it would take about 58 years for the energy savings to counterbalance that expense.

Livingston pointed out that he hadn’t factored in possible energy cost changes, and Gebian said a 3 percent rate escalation would reduce the time to 40 years but CES considers a 20 year payback reasonable.

The company recommends a dedicated outdoor air system for HVAC. This would provide “100 percent fresh air directly to all the classrooms individually and then exhausting that air from each classroom out the building,” Gebian said. “So that’s a huge advantage for both indoor air quality and energy efficiency, especially with COVID happening now, I think is even more so a better solution.”

“It’s far more efficient than existing systems that you’ll see in schools that are, you know, 10-20-plus years old,” he said.

The classroom layout is streamlined, to provide flexibility as they can be repurposed, Lisa Yates said.

Council member David Heuvelman (D-District A) asked about disabilities act compliance; Yates said a freight elevator will be recontructed to allow space for stretchers and all the toilet room doorways will be expanded to be compliant.

In other business, the Committee unanimously voted to move the authorizations for Cranbury Elementary and the Naramake kitchen to the full Council for approval.

Quit spending money Norwalk and the State of Connecticut don’t have.

This is why states like Connecticut don’t deserve Federal bailouts–because they don’t know how to manage a budget, save, pare-down, spend within their means, they only know how to spend.

I doubt the state has 80% of the money to give for the new (unneeded) high school & I know the taxpayers do not have the money to make up the balance.

Good luck. The state is facing multi-billion deficits for the next several years due to its contractual obligations and shrinking economy. This was the case before the virus. We’re heading into uncharted territory with our state’s finances right now. The current forecasts have us ending the year in a $1 bn deficit, while at the same time assuming that we’ll end up raising only $300 million less in revenue from last year. Let that sink in. In the middle of all of this, the people who have constantly lied about our finances want us to believe that this current shutdown is only going to cost us about 5 days worth of state revenue.

What does this mean? If the state does not get a federal bailout, it will need to raise taxes and/or flat out seize property to pay its bills. The rainy day fund won’t even cover this year and next years deficit. There is the little problem of 5.5% raises, which is a perpetuity cost to the state of $40 billion. That’s what this raise cost us assuming they never get a raise again.

Confiscating property is never going to happen, even though in theory it has to under current laws, so likely what will happen is that the state will sell debt to cover operating expenses like it has in the past. Even though this is one of the biggest taboos for the rating agencies, it pales in comparison to taxation levels so high, the state will need to seize property and auction it to get their revenue.

So what does that mean? There is no money for capital projects that aren’t of dire necessity. Think Yankee Doodle bridge and the 1000s of other structurally deficient bridges across the state. There isn’t even enough money for those and now with gas prices plunging even less revenue going into the transportation fund to be stolen later.

So, the last option we have and the only viable one is to get the legislature to fix once and for all the Ponzi scheme that is public education financing. Norwalk sends 10x more in revenues to Hartford than it receives in assistance, then we have to turn around and beg for our own money to build a school for our children. And if they say no, we can’t even build it even if we use our own money because it has to be approved by people who never come to Norwalk who get a 5.5.% raise this year. It’s so corrupt and foul and is just another microcosm of why this state is circling the drain faster than even I could have imagined.

The time for a fresh new set of eyes on these problems is plainly evident. Vote everyone out this fall.

The 80% of the cost of the New Bob Duff High is not a promise or a guarantee it will be paid for by the State. And given our current economic times and current situation it’s more of an election gimmick by Bob. Maybe he should first get back the $5 Million he wasted on the Tyvek Tower. Everyone see through the BS Bob and as much as Norwalk would love to have a whole new High School your back room sneaky deals is not the way. We know it’s your way but not the right way. This plan should not be rubber stamped by Harry & the CC.