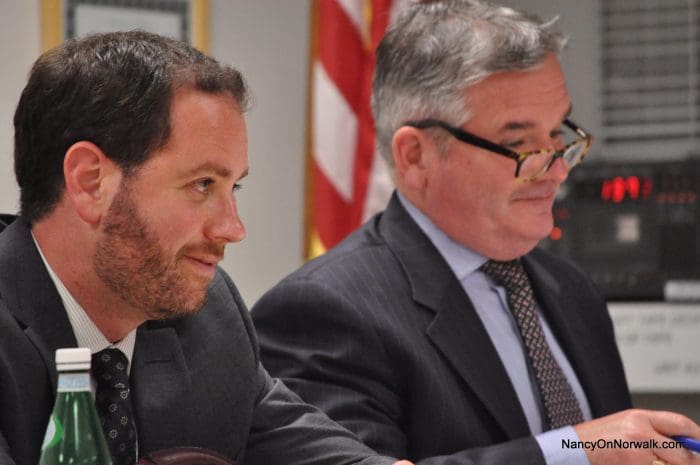 NORWALK, Conn. – The idea of an “end date” in relation to Norwalk’s deal with Wall Street Place developer POKO Partners was batted around and discarded by frustrated Common Council members Monday, and when the dust settled they agreed to recommend giving the embattled developer yet another extension – but with a bill, a total of $31,000 due on the July 31 end date of the latest extension.

The closing on POKO’s long-awaited construction loan is expected by July 31, Corporation Counsel Mario Coppola said at the Planning Committee meeting, and POKO is now on the hook to pay $1,000 a day through July 31,  Council members said.  Under discussion was a possible “Redeveloper Default Resolution,” an amendment pushed by Planning Committee Chairman Doug Hempstead (R-At Large), which Councilman Bruce Kimmel (D-At Large) said would amount to pulling the plug on the project. It was dropped.

“That was a long circle to end in the same place,” Councilman Rich Bonenfant (R-At Large) said, after Hempstead withdrew the amendment.

“I think the discussion is important,” Corporation Counsel Mario Coppola said. “It’s important that members of the public understand that members of the Council … have no more patience and that you’re going to proceed accordingly. We spent three hours tonight getting to where we started, but that was an important exercise.”

“This is tough, this is really tough,” Kimmel said.

The Redeveloper Default Resolution would give the city the right to exercise its options and terminate the Land Disposition Agreement (LDA) on the Wall Street site; in August, the Council and the Redevelopment Agency voted to extend the 10-year old LDA, after much handwringing, and put in deadlines. POKO has missed its June 30 deadline to close on its $13 million construction loan from Citibank.

POKO has agreed to pay the $1,000 a day, essentially buying time, Hempstead said after the meeting. That will take effect when and if the full Council votes to approve the extension at its July 14 meeting, and be backdated to July 1.

Hempstead’s amendment would have made the Redeveloper Default Resolution stronger, stating that the city would take action on its options under the LDA on July 31 if the loan hasn’t closed – either right of reentry or terminating the LDA.

Redevelopment Agency Executive Director Tim Sheehan said the amendment was intended to have a “chilling effect” on negotiations, “to basically say that is the end date of the agreement.”

“I don’t think anybody wants to kill the project,” Bonenfant said.

“You can’t have your cake and eat it too. … The amendment will kill the project,” Kimmel said. “That’s what the lawyers are saying.”

The denouement came after a 45-minute discussion in private.

In the lead-up to the executive session, Council members referred to a conference call with Citibank.

“Since being involved in the negotiations, I see it, I get it. I really do believe that it’s close,” Council President Jerry Petrini (R-District D) said, arguing against Hempstead’s “end date.”

“The longer we delay – and I get it, I’m frustrated too, guys – but at this stage, why would you want to tie your hands other than to say ‘You know what, we’ve had enough,’ and we’ve all had enough. But the prudent thing to do is not tie our hands at this point,” Petrini said.

Council members thought when they authorized an extension that the June 30 deadline would be it, Hempstead said.

Council members also discussed other technical details of the latest extension. Coppola said it was important to keep Citibank informed, even if it isn’t a party to the LDA.

“You have an underwriting department dealing with a particular transaction that is literally one of a kind on their books throughout the United States; who knows where they are going to be raising a red flag, or a white flag, whatever caution flag it might be,” Coppola said. “That’s why the developer’s counsel thought it prudent to have them look at this.”

There were comments made about it taking another year to get the financing, at this rate. Coppola assured them that it wouldn’t go on too much longer.

“Freddie Mac is making a decision,” Sheehan said. “Once they make a decision you’re going to know.”

“They’re taking their sweet time, it’s been a year to make their decision,” Bonenfant said.

“Well, actually, no,” Sheehan said. “Leadership was informed of the timeline that Freddie Mac has to make a decision. They’re actually trying to expedite making a decision.”

Why is it that Stamford doesn’t seem to have issues getting developments built but Norwalk seems to trip over itself and get in the way of development and scare it away. In the last 15 years look at the sheer volume of development in Stamford while Norwalk’s 95/7 has been vacant and other developments stall or fade out. Any way to change that pattern in Norwalk? I doubt $1000 a day fines will make anything happen except make more developers avoid Norwalk.

Perhaps if the City began shopping for a new developer?

We don’t want the robo parking garage and a 40% affordable housing project anyway. It does not help this city. If Citibank provides construction loan for this they will almost certainly end up owning it…or should I say we the taxpayers via Freddie Mac.

What does this mean? “You have an underwriting department dealing with a particular transaction that is literally one of a kind on their books throughout the United States;”, per Mr. Coppola. Does this speak to a process unique to Norwalk?