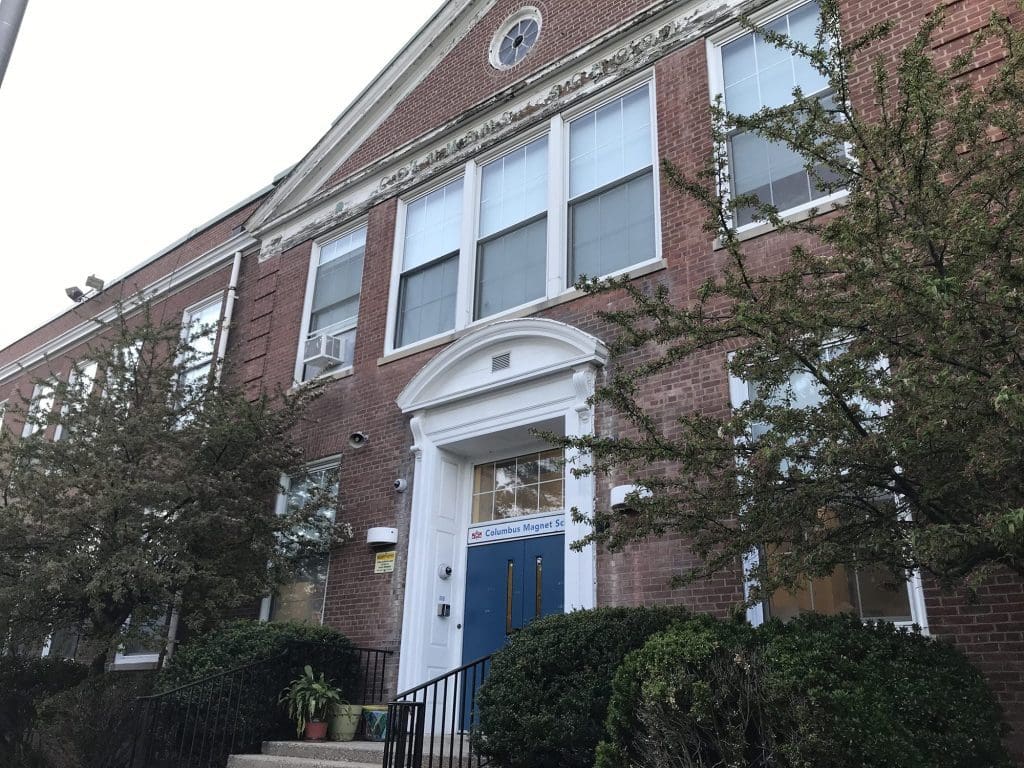 NORWALK, Conn. — Common Council members on Wednesday denied the Norwalk Board of Education’s request to demolish the existing Columbus Magnet School and build a new one in its place.

Instead, the Council’s Land Use and Building Management Committee voted to go ahead with the planned renovation of the Chestnut Street school building, rather than appropriate an additional $1.5 million to build a new school, as requested by the BoE.

“The primary reason was financial.  The renovation as new approach will save approximately $3.1 million, which can then be applied to other school building priorities,” Committee Chairman Thomas Livingston (D-District E) wrote Thursday.

Had Livingston’s Committee voted to approve the Board’s request, the matter would have gone to the entire Council.
The Council has approved $84.5 million for school construction projects since 2017, with the expectation of a new school of the Nathaniel Ely site, the expansion of Ponus Ridge Middle School into a K-8 facility, and the renovation of the Concord Street school and Jefferson Magnet School. The approved 2019-20 capital budget funds more than $21 million in school construction needs.

BoE members on April 23 voted to postpone renovations at Cranbury Elementary School and attempt to instead seek funds in the next capital budget cycle to build a new school there.  That request would occur after November’s municipal election, so it would likely be considered by different Council and BoE members. By postponing Cranbury the BoErejiggered their allocated funds to cover budget shortfalls, and sought to apply additional funds to the Columbus project, but were $1.5 million short of being able to finance a new school instead of renovating the existing school.

A new school doesn’t cost much more than a renovated school, because of state reimbursement formulas, Building and Facilities Manager Alan Lo and Jim Giuliano of Construction Solutions Group have explained.

“This is an 81-year-old building … the layout is sub-optimal. For $3 million (more) we can get a brand new school,” BoE Chairman Mike Barbis said on April 4.

“While there were anticipated to be some savings in future operating costs with a new building, staff was unable to quantify those savings and both approaches would have to meet state efficiency standards,” Livingston wrote Thursday, of Wednesday’s meeting. “In addition, there was a desire to preserve what has been determined by the Historical Commission and the Norwalk Preservation Trust to be a historic building in a historic neighborhood.  As noted by the Historical Commission:  “[t]he 1938 brick structure adds significant historic character to the Chestnut/Concord Street neighborhood that is rapidly being lost through new development and gentrification.”

NancyOnNorwalk has been told that Barbis did not attend Wednesday’s meeting. Staff members pitched the proposal.

Columbus was built during the height of the Great Depression, and at the time was “a huge source of pride” for Norwalk’s Italian Americans, historical consultant Todd Bryant said on April 23. “This is more than just a school, it’s a monument to those people who managed to get through the Depression and who came here as immigrants.”

“It is very difficult for that school to function as a school now because of the space concerns, because of the number of students that are enrolled,” Board member Sarah LeMiuex said on April 23.

It’s “theoretically possible” that the Board of Education could ask Council members to reconsider their decision, but Livingston appears to think it will stand.  “I don’t know what new info they could bring and there is not much time,” Livingston wrote Thursday.

Applications to the state are due by June 30.

Livingston said, “{B}ased on discussions I have had with some members of the BOE, I don’t expect much pushback.”

Some of us were thinking that the cost estimates on renovations are less reliable. Like in the case of the WRMS windows project where overruns doubled the cost from 2.5 to $5 million when unforeseen levels of contaminants were found. What are the odds that could happen on an 80 year old building? The build new option aimed at retaining the classic character of the old building and moving the city forward instead of dumping good money into an obsolete facility. The reason we haven’t built a brand new school in 50 years is the direct result of decisions made like last night’s. The reason our schools are falling apart is because renovations always end up costing more and shortcuts need to be taken, like the science wing at NHS that had to scrap the bathrooms. I could go on, but hopefully some get the point and make the right decision.

I was in attendance at the Norwalk Facilities Construction Commission last night but there was not enough attendees for a quorum so I left City Hall. No one asked me to attend the Land Use Committee meeting.
Please identify the votes on the Land Use Committee so we know who made this decision. Why anyone would think a renovated 80 year building, poorly located on the property, with an awkward layout, with security risks and with many possible renovation surprises (i.e., more $) would be a better solution than a new building (for an extra $1.5 mm) should be noted in the record.

@Mike Barbis – there you go again. Some may question your loyalty, and imply you don’t “love” Norwalk. Some may not like the tone of your comment – absent the fluff needed so a point can be made while rollerblading down a 6-inch-wide PC highway. Some may find this overall public display of independent thought by you, and Brian above – as rude. How dare you ask for accountability?

According to the state, Columbus is oversized for a modern elementary school by about 10,000 square feet. Thus, the state will reduce its reimbursement to the city by a proportionate amount. That’s one of the reasons it will not cost that much more to build a new facility.

Also, even with a renovated as new facility, yearly energy costs will exceed those of an entirely new facility. Multiply the difference in costs over a 20 or 30 year period and we would have a significant amount of money.

The footprint of the existing building, as well as its interior layout, are considerably less than ideal. It makes much more sense to build a new facility. And, of course, we would direct the architects to conform to the historical character of the area.

I believe the city needs to adopt a new mindset: Constantly renovating, even as new, in the long run is not cost effective.

Rather than a piece meal approach imagine if we had the BOE/Council “foresight” to plan ahead 10 and 25 years ahead to identify the cost effective public schools of the City. Especially considering multi-building campuses common to well run communities. Why can’t we encourage school planning well ahead that ultimately will create a more cost effective school system. Other cities do it. Here’s a chance for our Mayor to take the lead !

Is this an attempt by the city to look financially responsible? It’s a little late for that. Anybody who has renovated a house knows there are cost overruns due to the unknown. I wonder how much unknown there is on an 81 year old structure? The lawsuit legal bills associated with Poko and Firetree would probably have covered the difference. There must not be a market for law firms looking for billable hours associated with new school construction.

I’m curious to know why the BoE keeps saying the existing footprint is “less than ideal” – just curious, nothing more.

Claire, here is the list of pros and cons. Practically all of them call for a new building rather than a renovation. And the Council Committee chose the less optimal solution. Typical Norwalk – as said above, penny-wise, pound foolish – https://www.nancyonnorwalk.com/wp-content/uploads/2019/04/NPS-BoE-new-Concord-school-pros-and-cons-20190423_02543804.pdf.