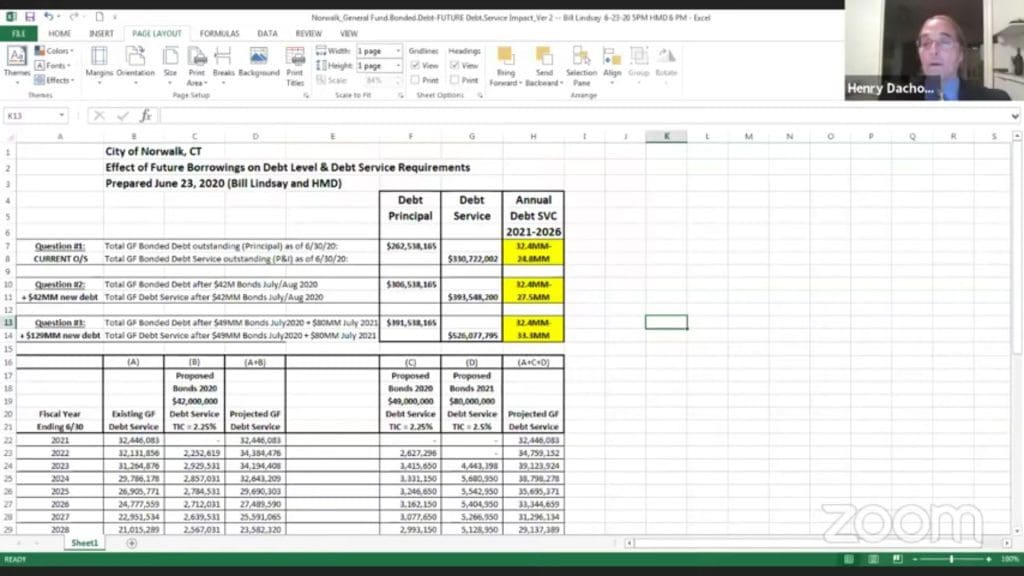 NORWALK, Conn. – The Common Council has authorized $129 million in capital budget bonds on a 13-1 vote.

Included in this is authorization for $50.3 million in borrowing to fund a new Norwalk High School, should the State provide the expected 80 percent reimbursement, and $45 million for a new Cranbury Elementary School. The key to fiscal responsibility is to spread out the borrowing, Chief Financial Officer Henry Dachowitz said in a lengthy explanation of the financial maneuvering he’s done to keep the City’s total borrowing below $400 million.

“Time is our friend to help the debt service go down so it’s manageable within all the other pressures on our operating budget,” Dachowitz said.

Dachowitz’ dive into complicated budgetary minutiae came in response to a question from Common Council member Thomas Keegan (R-District D), who asked about total bonding in relation to debt ceilings.

Keegan was the lone Council member to vote against the $153.8 million 2020-21 capital budget, which factors in $24.8 million in expected grant funding.

Financial advisors have “determined that $400 million is the absolute limit for the amount of debt that we can issue and still maintain the triple A bond rating,” Dachowitz said.

“It’s very important to time the borrowings appropriately based on the cash flow expenditures,” Dachowitz said. So although the two schools are expected to cost $95.3 million, the plan defers $87 million for future budget years because the money will be needed once construction begins.

There are Internal Revenue Service (IRS) requirements for borrowers of tax-free funds, Dachowitz explained, citing as an example, “If we needed $100 million to build a bridge and it will take us two years, we are not allowed to borrow $150 million for three years.”

If you borrow too much at once, you get into an IRS violation, he said.

Norwalk will work with its advisors to issue its bonds in accordance to favorable markets, because, “I can’t manage how much we have to borrow. We’re fitting it in as best we can. But what I can do is look at the market and try to borrow as cheaply as I can,” Dachowitz said.

“We are in a very good situation with our Triple A bond rating, with our very high Rainy Day reserves,” Dachowitz said. “And everyone tells me Triple A credits in this market look good. There are maturities that occurred June 30, July 1, so investors have cash to invest. There have been four straight weeks where investors have put more money into tax-free bond funds. So, everything is looking good.”

But, as a “financial prophet,” he needed to point out how much has already been authorized for borrowing – $14 million a year, just to cover current projects, and Norwalk can’t really issue more than $42.9 million a year, he said.

One alternative is to go through the authorized projects and see what can be cancelled, or you could scale some back, he said.

“We’re bumping up against limitations, not immediately. I’m an early warning type of guy,” Dachowitz said. Mayor Harry Rilling’s policies and “my implementation of them allowed us to handle COVID so well, if we make these decisions and changes over the next three years, I think we’ll be okay. And again, a lot depends on COVID how bad the recession will be. Yada, yada, yada, but we have to start looking at those decisions.”

“If we want to keep our AAA rating, we might be able to increase taxes because of growth in the grand list, which will handle that service,” Dachowitz said. Norwalk could possibly increase its total debt to $420 million.

Also, “If we increase our grand list, then the mill rate increase will be moderated,” Dachowitz said. “…It’s all proportional.”

As an example, The SoNo Collection was appraised at $500 million, he said. “Obviously, they are absorbing some of that tax increase that the rest of the people in that district will not have to absorb.”

“Except for those types of situations, it’s going to be driven by the costs,” Dachowitz said. “And some of the costs are the capital cost of operating, of having our debt service. Some of it – for example, when the market crashed we had an emergency meeting of the Pension Board. They reminded me that the amount that’s annually required as a contribution for the pension and OPEB (Other Post-Employment Benefits) liabilities is determined with a valuation as of July 1. So we may have lucked out because so much of the market decline has come back. But if not, they estimated that we might have to pay about $4 million more per year for those contributions just to recover. This coming year in our operating budget, we are including an $8 million spend down of our Rainy Day Fund, and originally, we had planned not to do that anymore in subsequent years. So we have all sorts of pressures on the operating budget.”

Everybody knows the concept of the “slow boiled frog”. The idea is – if you drop a frog into a boiling pot of water – it will immediately jump out. However, if you put it in a pot with warm water, and slightly raise the temp over time, the frog will just simmer until fully cooked. A French delight!

This is the story of Harry Rilling and the taxpayers of Norwalk.

The last budget by another mayor was 2013–2014 (Moccia). It was 309m in expenditures, down from the prior year (500k), and it included a capital budget of 19.7m. Within that capital budget – there are typically two major sources of funding – the BOE and Water Pollution – which that year received 2.7m and 3.4m in funding, respectively. Our Grand List was 12.8 billion.

Here is the budget progression under this mayor, and the increasingly one-party common council, and of course – the completely Rilling stacked BET:

Notice the increases are typically lower in “election” years. The big re-organization year was the outlier, but they pulled that neat trick of “re-valuation” – which goosed the projected grand list up 16% with great fanfare – he could pretend your taxes magically went down. BTW – we still don’t know if that’s real – as the whole point of litigation (400 cases) is obfuscation. Don’t complain that he saved you $197.00 per year while wiping 200k of value off your home’s market price. Or worse.

Now for the cap budget. Check this progression, with BOE & Water shares:

In summary – over Rillings time in office – we have borrowed 484 million dollars (average about 70m annually), of which 291 million is for the BOE (not the budget – borrowing for capital improvements) – and 40m for water pollution control projects.
The FYE expenditures enclosure in this year’s tax bill shows “Debt Service” is 8.41% of the budget – 32.5 million to pay the town credit card bill – the third largest percentage expenditure behind the BOE and – shock – those fat public union employee benefits.

Now to be fair – everyone in the world – I mean – the world – knows the CT State legislature is not going to approve 200m in spending on Bob Duff’s vanity project – the new Norwalk High. Just look at the looming financial apocalypse noted in an article right here on NoN posted June 21 (“Pandemic could erode 1/3rd of all state revenues). The fact that the common council rubber stamped this budget shows just how grossly out of touch they are with the taxpaying residents – and how in lockstep they are with the mayors political posturing. This is all Harry helping Bob because Bob helps Harry. Neither helps us.

Here is the issue: we have no remedy, except at the voting booth. We have no “re-call” provisions, nor can we “impeach” the mayor, nor any common council member. But as taxpaying residents – you really have but 3 choices.

The first is to vote out Harry and every single person on the common council. Clean slate. Choose candidates that are competent – and equally important – unaffiliated. NO PARTY POLITICS.

The second is – move. Leave.

The third is – slow boiled frog. Watch your equity dwindle, your taxes increase, and your quality of life diminish.

3 houses on my 8 house street just went up for sale. 2 more are going within a year. At least the city will get some conveyance taxes, but that’s not how we should be going about it.