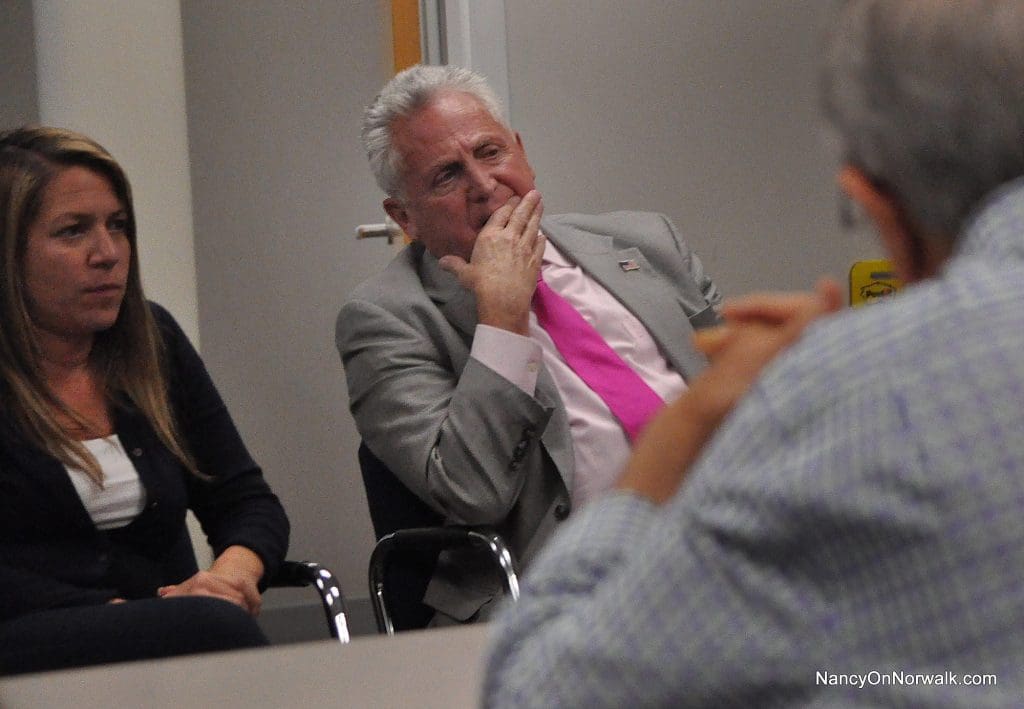 Correction, 4 p.m. May 16: Fair Housing Officer does not move to the City.

This creates a Chief of Community Services, a $140,000 a year position that is said to be cost-neutral as it replaces the Human Relations & Fair Rent Department Director position formerly held by Adam Bovilsky. It also creates a Human Services Director, a $100,000 a year addition to the City budget.

“This is the final stage of our reorg and it’s critically important that we design a system of management within the City of Norwalk that is going to help us run the city in a professional way,” Rilling said.

“A lot of these functions I thought could have been absorbed within the existing positions,” Minority Leader Doug Hempstead (R-District D), owner of the lone dissenting vote, said. “… Originally, I think it was proposed as the reorganization was basically supposed to be a sum neutral, as far as savings go, and this is an additional expense.”

“It’s been a long process,” Rilling said. “My staff and I have been working on this for the better part of two years. The Council held many hearings, asked the right questions, asked very difficult questions, and made us answer the questions to their satisfaction, until they were convinced that we got it right.”

The proposal for a Chief of Community Services position was dropped until March because the Norwalk Branch NAACP and the Fair Housing Advisory Commission objected to the planned merging of the Fair Rent and Fair Housing departments, saying it was in violation of the 1986 federal consent decree that created Norwalk’s Fair Housing Office.

Under the approved reorg piece, “The Fair Housing Office location doesn’t change (until or unless the NAACP and City agree to a move) and my supervisors remain {Redevelopment Agency Executive Director} Tim Sheehan and the Fair Housing Advisory Commission,” Norwalk Fair Housing Officer Margaret Suib said in a Thursday email.

Documents dated Aug. 9 show $277,409 in additional costs arising from the reorg, offset by $96,260 in savings, for a net cost of $181,140.  City officials previously said that they believed additional savings will be found after the reorg’s implementation.

“One of the first things that happened me when I joined the Council a few years ago was people asking, ‘Where do we go with my question regarding social services?’ There never really has been a place,” Council President Tom Livingston (D-District E) said. “A city of our size really needs a resource for citizens. I think this is long overdue.”

He said 14 of Connecticut’s 15 largest communities have a social or community services division, and the one that doesn’t is Norwalk.

“I know sometimes we lose sight of the fact that there are many people in the City of Norwalk who need services,” Rilling said. “… They need to know where to go… As Mr. Livingston said, this is a glaring need, an absence in our city and has been for quite some time, so it’s critically important.”

It might not be cost neutral but it’s an important investment, Council member Colin Hosten (D-At Large) said.

Hempstead took a bit of exception to the comments.

“It’s not that we don’t need these functions. I felt they could be cost-effectively absorbed into existing positions,” he said.

Under the newly approved reorg culmination, the Mayor will appoint the Chief and the Council will confirm it. The Chief then serves at the Mayor’s pleasure. A Bachelor’s Degree and five years’ experience in a closely related field are required, though a master’s degree or other graduate degree would be preferred.

The Chief appoints the Human Services Director; the position requires a bachelor’s degree and five years’ experience in human services or public administration, including two years of supervisory experience.

“We always look around and say, ‘No, we need to run the City of Norwalk like a business. We have to have the people in place, that have the talent, the skills, the knowledge, that can help move the city forward,’” Rilling said. “We look around and oftentimes we find people leaving to go someplace else because they can make more money someplace else.”

Well I do thank minority leader Doug Hempstead for trying to protect the taxpayers that are simply hanging on by a thread but this state clearly has decided as has Norwalk to totally disregard the taxpayers .

Spend spend spend!!! Will it ever end? Thanx Doug, we know you’re trying to stop it! Let’s spend money on making our city a great place to live not a give my buddy a job city!

Thank you Doug! Seems like a major ‘shell game’s to me. Have lived in Norwalk 76 years and have watched it go down the tubes recently. So glad my kids don’t live here!

Financial illiteracy is a significant problem. Taxpayers don’t understand, likely because of how our politicians speak about such things. This reports describes “a Chief of Community Services, a $140,000 a year position” – but is that “all-in”? Or is that just salary?

Unless you have budget experience with personnel – you may not know the expected “load” factor for “benefits” – health care, etc. Last time I ran a full P&L (a while ago) – it was 37% load. Don’t forget the additional payment of 7.65% (I believe) for social security.

Same question here – “a Human Services Director, a $100,000 a year addition to the City budget”. Is that salary, or “all-in”? This position was noticeably incremental – meaning more cost to the taxpayer for nothing more than “promises” that services will improve. Doug Hempstead – who has some knowledge of these things – was astute to believe the duties would easily fold into existing positions.

Quite the trick. Encourage illegal immigration. Sanctuary City policies. Go so far as to assure this community – we look the other way. Ironic it’s a former chief of police – and the current one – who decide what laws to enforce (kind of like ordinances, and traffic)

Then you wonder – why is our BOE always short funding? Why the ELL and reduced lunch population are growing every year?

Then – say to the taxpayers – hey – we need $150,000 extra cost this year – and every year hereafter plus a 4% guaranteed raise – just have a body in charge of the mess we’ve created. And you will pay for it – because we are going to dazzle you with fancy language like management re-organization for improved span-of-control.

This is an unaccountable, out of control municipal spending monster that currently unchecked and largely unsustainable. Someone explain how I’m wrong.

Why is the Mayor so tan? #notenoughwork

The city of Norwalk is the largest employer in Norwalk. We bring apartment buildings into Norwalk not businesses. We give tax breaks to developers to build what we don’t need instead of attracting business that employ people and pay taxes.