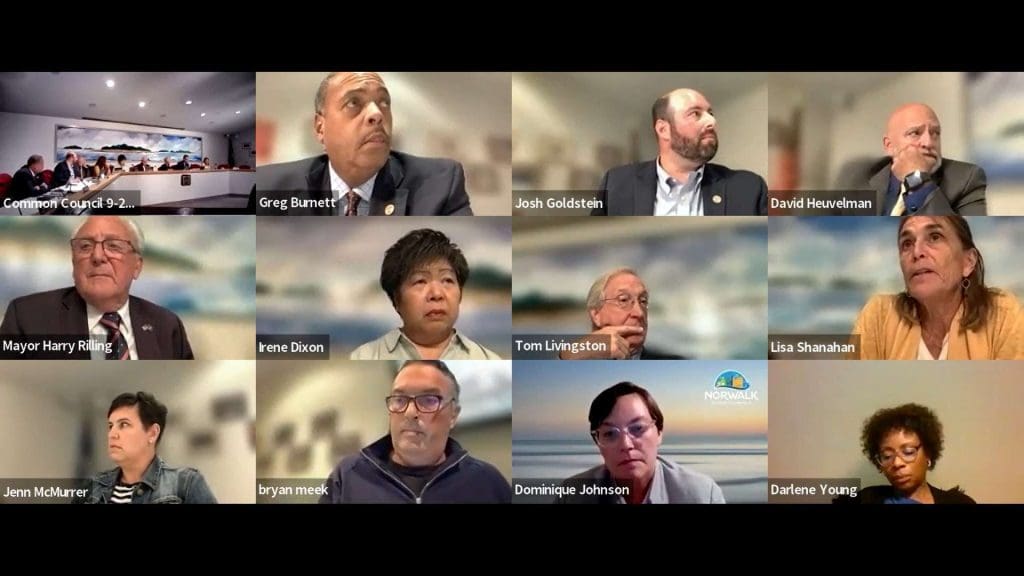 NORWALK, Conn. — Common Council members have approved a cannabis ordinance for the city along party lines. Leaders said it’s “just a beginning,” as results from its implementation will be reviewed as time marches along and revisions will be made accordingly.

The sole no vote came from the lone Council Republican, Bryan Meek, appointed recently to represent District D. The ordinance is “a solution that’s looking for problems,” he said during the meeting. In a recess, he called the State legislation that has inspired the ordinance a “land grab” and said investors who spend millions on a cultivator license will then have to “give” a member of the minority community a 60% stake in the business and have them “do nothing.”

Three marijuana stores will be allowed to open in Norwalk at sites to be determined by rules set by the Planning and Zoning Commission, under the approved ordinance. It’s in response to the Connecticut General Assembly decriminalizing cannabis and also will allow marijuana cultivation, again with specifics set by Zoning. The Mayor will have the responsibility of designating public places where citizens can legally smoke marijuana.

The new State law takes the highly unusual step for Connecticut of allowing a municipal sales tax. Any municipality that allows retail cannabis establishments will collect a 3% tax on sales, with strings attached about how the money can be spent. The guidelines are aimed at increasing equity to reverse the negative impact of the War on Drugs.

“We are responding to the State ordinance making it legal to both consume and to sell cannabis in the state of Connecticut and I think it would be a dereliction of duty for us not to take advantage of this 3% sales tax, as it could be so beneficial to so many important programs that we do need to fund within our city,” said Ordinance Committee Chairwoman Lisa Shanahan (D-District E).

Multiple Democrats thanked Republican former Council member Tom Keegan, Meek’s predecessor, for his help crafting the ordinance as a former law enforcement officer. Keegan worked with Josh Goldstein (D-At Large) to do most of the research.

The Council worked for a year on the ordinance.

“We believe that our proposed ordinance represents a thorough and thoughtful approach to regulating cannabis in Norwalk,” Goldstein said.

“I didn’t always agree with every piece of every line that we were working on in this. But I think that the spirit of what is here is positive. It’s positive for Norwalk,” Council member David Heuvelman (D-District A) said.

A trio of public speakers disagreed.

“I think it’s wrong. I think you’re making a mistake,” Martin Tagliaferro said, asking how parents can teach their children drugs are bad when the City authorizes their use.

Richard Bonenfant said it’s impossible to keep dogs out of City parks, so how does the City expect to stop people from bringing in little bags of weed?

Though the Zoning Commission expects to keep cannabis stores from within 1,000 feet of a church or school, it’s a double-edged sword because “forever, you’ll never be able to put a kiddie gym or a daycare center or anything like that” near the store, he said.

Lisa Brinton said she supports the State’s legalization and decriminalization but has concerns.

“We spent years banning cigarette smoking in public spaces and the smell of pot is even more pungent, and invasive to public’s quality of life,” she said.

Council Majority Leader Barbara Smyth (D-At Large) said that as a parent and grandmother, she understands some of the concerns.

“I think the thing that is encouraging is how highly regulated this is, and the protections in any of these establishments,” she said. “It’ll be treated like alcohol, you know, you have to show a driver’s license, you have to be 21 years of age. So there are protections around that kids are going to find it.”

Goldstein said the ordinance “straddles the line of both regulating public consumption, permitting retail sales, and providing a vehicle where people from across this area, not just Norwalk … would come be a participant in Norwalk commerce, both in purchasing these but also hopefully stopping by a restaurant or going to a store.”

But Council member Darlene Young (D-District B) said, “In my opinion, the things that we’re looking to fund, although it comes from the State, are reactionary and it does nothing to me to improve the conditions and the lives of families that have been impacted by the War on Drugs.” She had decided just then to support the ordinance because, “we’ve said it publicly that those things are changeable, it is flexible…. I appreciate all the hard work and effort and it’s the beginning stages of something unknown.”

During a recess in which the City’s Zoom link remained active, Meek talked with a supporter in front of a live microphone. He mentioned the State law fee of $3 million for a cultivator license, which then requires the license winners to “pick a minority operator.”

He said, “You got to give somebody a 60% stake in your enterprise for doing nothing. Like, who’s this gonna be? Like, Travis Simms? Or who? Nobody knows.” The licenses will be awarded in light of who’s connected to who and “if you just plunked down $2 million … are you going to let someone operate that? …You need somebody who knows how to operate a business.”

State Rep. Travis Simms (D-140) and State Senate Majority Leader Bob Duff (D-25) did not reply to an email giving them a chance to respond to the comments.

Shanahan said Saturday that the ordinance “might well merit a revisit as we see the law operate in reality.  We also would not be surprised to see the State change some aspects of its enabling legislation and we will be sensitive to those changes and also respond accordingly.”

A conversation during recess:

This equity business is. Bogus , war on drugs affected everyone. Folks been smoking pot where they want , these people won’t change you’ll just be victimizing these same people.

Well we know where the democratic mafia party stands🥵👎🏽 now the mayor has to choose a place for people to get high why don’t they do it in their offices or in front of their houses?🥵 Yesterday at a friends church in South Norwalk some crazed drug high or demon possessed man interrupted the service!!😩 God knows what will be next in our beloved city😩🙏🏼✝️🇺🇸🦔

Not that I was asked to comment on my comments by the journalist who wasn’t even there, but If these licenses are not awarded to the politically connected, I think I’ll walk to Hartford.

With millions of gallons of raw sewage running into the Sound every time it rains a little hard, this is what our local body politic is focused on. What’s next the plastic wrappers that paper straws come in for your drink served in a plastic cup?

I will stand by my words that this is a land grab. The grassroots libertarian movement to legalized has fully jumped the shark in this cynical monetization system that is guaranteed to produce haves and have nots based on politics. Hopefully this is a low point in the history of our governance. Anyone who has seen the destruction first hand in SF and Seattle like I have knows full well that this does not end well.

So public consumption is banned, except for one location?

Seems like people are trying to impose their top-down vision of “how things should be” with this legalization instead of addressing “how things already are”.

And do you know how things already are? NOT BAD. I mean, come on, people, I smell weed just walking around SONO at least a handful of times a week. I’m still alive. I still like living here. Yes, it stinks. For like 5-10 seconds – maybe 30 if you’re walking slow.

You know what also stinks? Public bathrooms! It’s horrible when you have to smell the person taking the dump in the stall next to you. Or the dump someone else just took before you! And if you have to take a dump yourself, you’re -shall I say- “pot-committed” to smelling that stink for the next 5 to 20 minutes! Oh, the horror. Here, I have an idea, LET’S BAN ALL PUBLIC BATHROOMS!

Not every little inconvenience has to be legislated out of existence any time we want everyone’s net liberty to increase.

Meek’s comments are disturbing. What exactly is he inferring?? What does the NAACP have to say about this??

@ Bobby Lamb. The same thing the NAACP said about the white officer mauled by a black male at the oyster fest = NOTHING! His point was that it’s ludicrous they put a racial requirement on the license and then you have to give up 60 percent. Who would want to sign up for that deal? How come we aren’t discussing the raw sewage spewing into the river and long Island sound instead of Marijuana all the time.

The point regarding how other communities are affected by such legislation is an important one!
And “…they put a racial requirement on the license and then you have to give up 60 percent…”

these comments are also of concern, I think the city needs to focus:

“… With millions of gallons of raw sewage running into the Sound every time it rains a little hard,…”

“…raw sewage spewing into the river and long Island sound….”

I recall this article “Norwalk ordered to clean up sewage system problems…”
Like did I miss the article that has the link with the update its Sanitary Sewer Collection System Master Plan, which was due 9/30/22.

Water is life and yes I know sound and river water is not what we’re drinking. Still there’s a domino effect!

This is ridiculous. You are not giving thought about the long term mental health impact (and the financial cost!!) this will be for legalizing a drug. The marijuana of today is stronger. It can activate mental health issues in people. Is this the kind of example we want to set in our community for the young people? Our Norwalk Public Schools are already not doing too good and you want to throw drugs into the mix. Kids WILL get their hands on this. You want to open these dispensary too close to the schools!! Have you lost your minds?