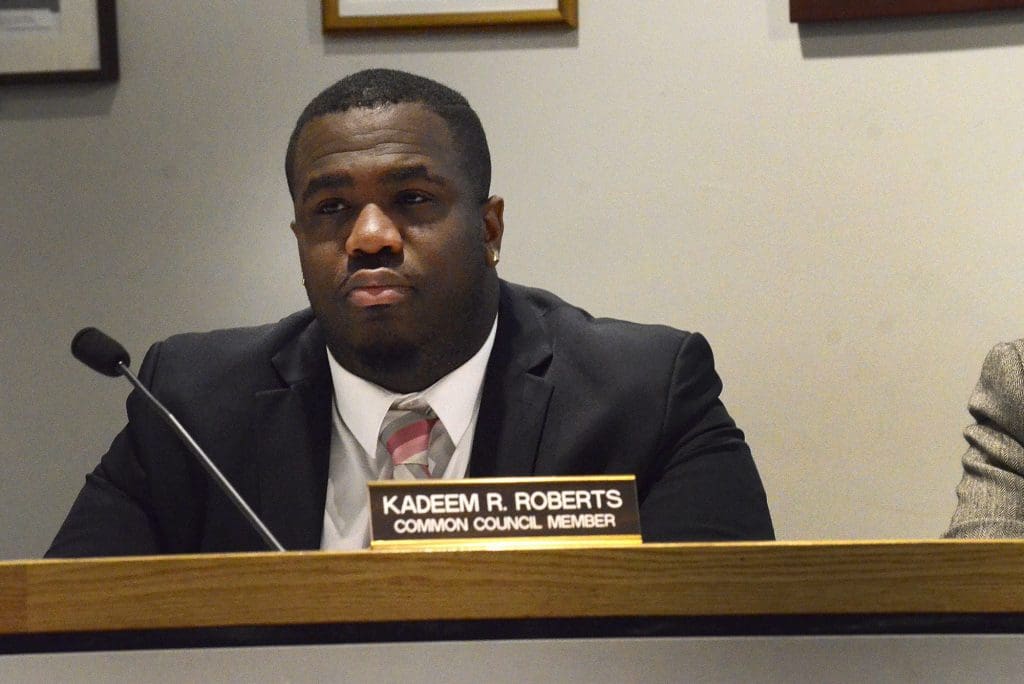 NORWALK, Conn. – Kadeem Roberts, a Norwalk Common Council member, was arrested early Sunday and charged with Assault in the Third Degree, Disorderly Conduct, and Interfering with a 911 call.

Roberts is a Democrat representing District A. Mayor Harry Rilling and Democratic Town Committee Chairwoman Eloisa Melendez both used the word “unfortunate” in response to the arrest. 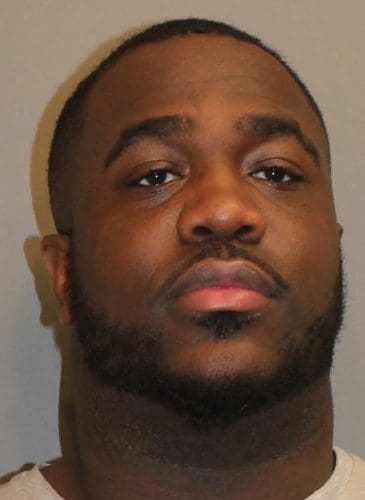 Norwalk Police say they got a call at 2 a.m. Sunday alleging a disturbance on Fair Street. “The victim told officers after a night of drinking the victim got a ride from Roberts, and they began arguing in Roberts’ vehicle. The vehicle stopped at their destination where the argument continued,” Lt. Jared Zwickler wrote Monday.

“Roberts threw the victims belongings on the ground, ‘mushed’ the victims face with an open hand, poked the victim in the eye, and pulled the victims hair. The victim had injuries consistent with these claims but denied medical attention. Roberts then took a phone from the victim while trying to call for help,” Zwickler said.

A recording of the police dispatch call, recorded by NancyOnNorwalk contributor Harold F. Cobin, shows that the complainant, who is not the alleged victim, told police that Roberts had come into the home and tried to take a cell phone. Roberts left the residence and then returned and was assaulting the victim, the complainant said.

“Kadeem Roberts has dedicated his life to service and will continue to do so.  He encourages everyone over this holiday season to drink responsibly, and if they feel that they are not in a condition to drive, they should call a designated driver.  That is exactly what happened in this case, Mr. Roberts received a text from the complaining witness at around 1:12am asking him to pick her up from a party because she was drunk.

“Mr. Roberts obliged and picked her up.  When he dropped her off, she refused to exit the car due to her intoxication.

“They say no good deed goes unpunished, and we want to be clear, Mr. Roberts never interfered with any 911 calls nor did he assault this woman.  I am confident that she will come forward with the truth.

“The larger issue at play is this, because police officers are overly concerned with not making the wrong call in {domestic violence} cases, whenever a person calls the police and makes an allegation, they rush to judgment and arrest based solely on the allegations.

“We are confident that not only will the truth come out that will exonerate Mr. Roberts, we are going to push for legislation that changes this culture of arrest first and ask questions later.

“Success is given to those who work the hardest.”

Rilling said, “Kadeem is a likable guy. This is unfortunate and I hope it all works out.”

Melendez said, “This is an unfortunate situation. Given the seriousness of the allegations, it’s important that we wait for the facts.”

Wait for the facts? The fact that she showed injuries consistent with her allegations are facts enough! SMH…

I give the Norwalk Police credit for doing their jobs in spite of the current woke culture we find ourselves in…Speaking of woke, does anyone know if Bob Duff and his acolytes have apologized to Norwalk Police for their mistruths in August? Still waiting…..

This is indeed a very unfortunate situation.

All parties are innocent until proven guilty….

…However, I am concerned about the woman in this story. It appears that Mr. Roberts’ Attorney and others may be pressuring this alleged victim to recant.

Please, friends of this woman please tell her that she has support through the following resources:

1. Office of Victim Services at 1-800-822-8428. They provide assistance and direct the Victim to counselors and lawyers.

2. If this is considered a “Domestic” incident (not clear in story), then Woman should call 1-888-774-2900 and they can help her find legal help, counseling and housing to escape abuser if necessary. Do not be embarrassed that you were drinking. don’t feel that this is all your fault! You deserve as much help as Mr. Roberts.

Let’s remember that there are two people involved in this incident.

While Mr. Roberts may be a likable person, the woman in this story may also be a wonderful person. Based upon the personalities involved in Mr. Roberts’ defense, I pray that the alleged victim has a support team that will protect her from undue pressure to recant if not warranted.

@Diane — Every woman on the wrong side of a domestic dispute deserves all the support we can give her…That being said, you also mentioned something about being innocent until proven guilty. Based on your comments it doesn’t seem like you actually believe those words. I wouldn’t know Kadeem Roberts if we were the only 2 people on an island, BUT he does deserve due process. We are all guilty of rushing to judgement these days — Hell Bob Duff’s supporters looked like idiots blasting Norwalk Police in August…Let’s all take a deep breath and let the professionals handle the heavy lifting.
Again, I’d like to throw a shoutout to our Norwalk Police Dept. Under incredibly difficult conditions they are out there day and night protecting the vulnerable and enforcing our laws the way they are written..

Councilman, Your second mistake was hiring Darnell Crossland. That makes you a sure thing to lose the case. Its always the race card with him. He has his own legal troubles

@John O’Neill My comments were written in order to ensure that the woman is also treated fairly and has a support system given the aggressive statements that Attorney Darnell Crosland and Mr. Roberts made in this article and the HOUR. One can only imagine the pressure that this alleged victim now feels to recant. I hope that the Police report and the Court will sort out the facts and render a judgement. I am NOT saying that Mr. Roberts is guilty…quite the opposite.

And using this unfortunate incident to take a cheap shot at Senator Duff about a completely different occurrence is unfair.