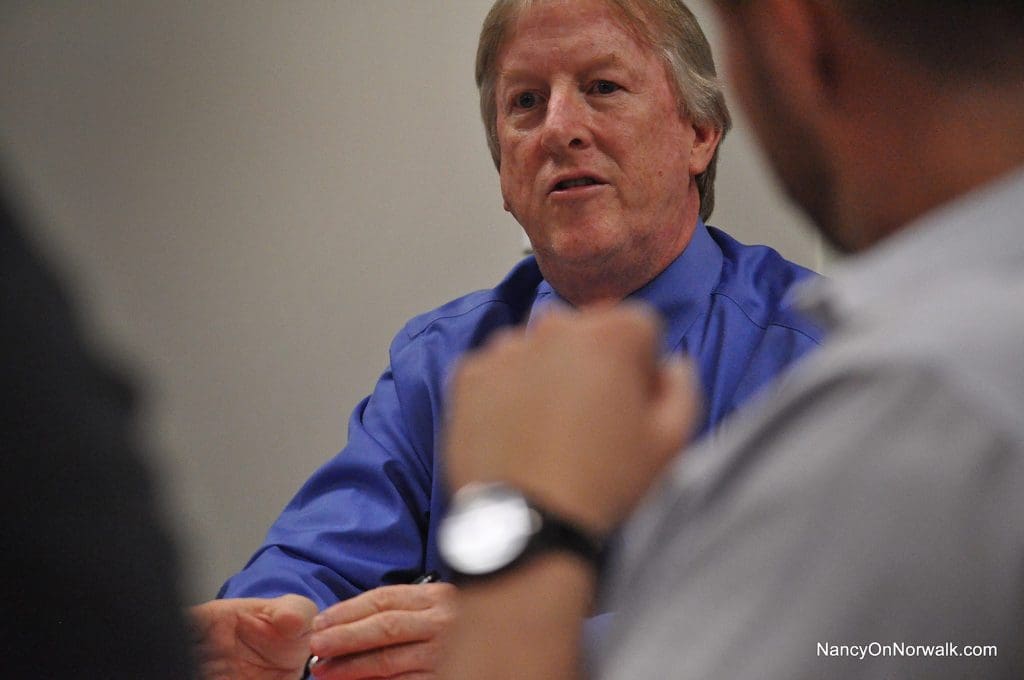 Common Council President John Kydes (D-District C) has formed a special Committee to consider Rilling’s reorganization request but on Wednesday the Personnel Committee met to grill Director of Personnel and Labor Relations Ray Burney on the topic, with Doug Hempstead (R-District D) asking for information and, in frustration, suggesting that he might put in a Freedom of Information Act request to get it.

“I am just looking for the information that somebody came up with a flowchart for,” Hempstead said to Burney. “I am not picking on you… I feel as a Council member, and I can say after 24 years, this is one of the maybe two or three times I felt as a Council member that I have been totally disrespected, and I am not saying by an individual but by a process.”

“I don’t think that information is being deliberately withheld from you,” Burney replied, explaining that Rilling and Kydes were working to set the agendas for the Ad Hoc Committee meetings where the information will be walked through.

Personnel Committee Chairwoman Faye Bowman (D-District B) said the entire Council should have the information and, “We are not afraid of paper.”

Kydes felt the initiative needed a special Committee, Burney said at the outset of the meeting, with July 1 set as an implementation date to coincide with the beginning of the fiscal year.

“Changes like this, the longer they sit around, the more stale they become,” he said, explain that the Ad Hoc Committee will meet Monday if the agendas are worked out.

If Rilling and his staff had been working on this for nine or 10 months, it should have been brought up during the budget process, not eight weeks before the beginning of the fiscal year, Hempstead said.

“Tell me any corporation, that is not going bankrupt, or any government that has gone through total reorg of its management in eight weeks or less, that requires bodies to sign off, funding, etc. etc. and creating of job descriptions,” Hempstead said.

There are drafted job descriptions but they won’t be released, except through the Ad Hoc Committee process determined by Kydes and Rilling, Burney said.

Hempstead handed out some research on ways to reorganize government and said, “This may all be right but all I have heard about this is this was based on kind of New Haven. So I don’t know what made New Haven right.”

“It was not based on just New Haven,” Burney said. “We looked at all of the major cities in Connecticut… We conferred with a handful-plus of the Mayor’s senior managers in the city, discussed what the city does, how it is currently set up, how it could be better set up. Took from the other cities that we looked at, some leads, some examples. Looked at what the city of Norwalk does and doesn’t do well and put together what we think is the more efficient, an organization that will better serve the needs of the city’s residents, dollar for dollar.”

“It doesn’t seem at all realistic that this is a process that can take place in eight weeks,” she said. “… I think that’s what has everybody really stepping back and really wanting to know what’s going on here?”

She suggested that the changes could be implemented over a period of time, but Burney replied that Rilling had presented it as a complete package.

Nick Sacchinelli (D-At Large) suggested that maybe the changes wouldn’t be made for the coming fiscal year.

Finance Committee Chairman Greg Burnett (D-At Large) asked how efficiencies would be measured because, “It shouldn’t be just a gut feel, it should be clear.”

“We need real measurements so that we can justify whether we have true efficiency. That’s not going to happen overnight,” Burnett said. “… I think the concern is the timeframe that we are expected to get all of this data, massage it, feel good about it and then vote on it by July 1.”

Beth Siegelbaum (D-District C) agreed and Burney went on to comment that there’s no organization chart for city employees, that the first thing he did when he began work here was look for it only to find out there was none.

“This is just to take a look at the 625 city employees and how they fit into the structure under the Mayor’s guidance,” he said, explaining that reorganizing Boards and Commissions would mean “We’d be here forever” and “I think that is going to be chapter two of this exercise.”

Smyth asked how many direct reports Rilling has, and Burney repeated the previous information that it’s more than 20, with the plan reducing it to seven or nine, as the Chief of Staff and Corporation Counsel are over the seven Chiefs.

“I mean, 20 direct reports is a recipe for miscommunication and chaos,” Smyth said. “I mean it just makes sense, it makes sense looking at it.”

Burney said he didn’t want to use HR jargon but, “It’s a span and control exercise.”

“If your span of control is too big, you have poor communications, poor decision making, you get frustration, you get people making decisions that are outside of the direction that the organization wants to go into,” Burney said. “So your span of control has to be somewhat manageable and if you take a look at some of the relative experts out there, they will tell you that 20 is way too much, and that seven begins to get to be the envelope. We think this may not be perfect but certainly a little bit better as far as funneling information, funneling resources up and down the food chains here.” 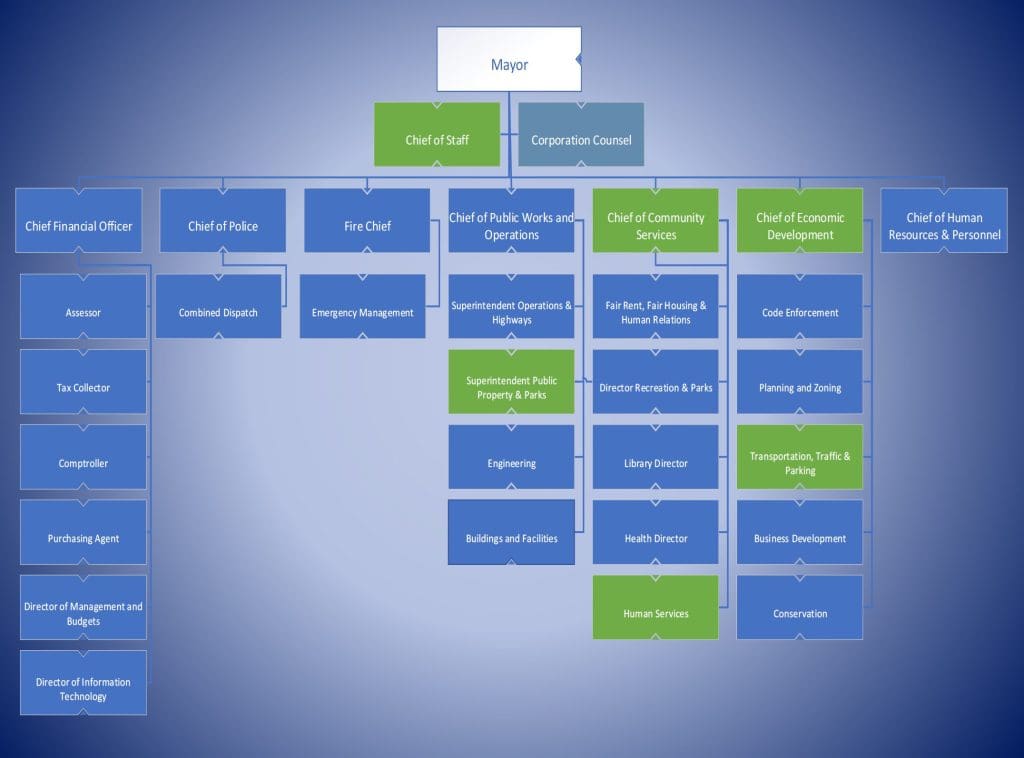 The flow chart for the proposed Norwalk government restructuring.

Mayor King, er I mean Mayor Rilling, knows that pushing a re-org through in 8 weeks is important. That eliminates things like good solid public vetting with clear goals and objectives, accountability and an actual fiscal accounting of expected efficiencies. Pesky questions are reduced. Getting facts on the ground quickly makes them harder to change; and now we have a new communications director to spin anything questionable.

If this is truly being done for the good of Norwalk, than this is not the way to go about it .

As for New Haven —it is a bloated, inefficient, highly taxed municipality living off the State’s dime (and a lot of Norwalk hard-earned tax dollars). Why are we using New Haven as a model for anything?

NON, thankyou for witnessing the dialog at Council Personnel. I wish more citizens would attend Council Committee meetings like this to bear witness…

Before NON arrived, I agreed during Public Comment that City reorganization has been needed for a long time, but that the process achieving it needs to be properly planned.

I also asked that the Mayor, the Council President and the Council bear in mind the following: I felt the timeline was too rapid and that Council folks with little spare time attend and get more involved in the important POCD meetings happening now in same timeframe (May-June) instead of just at the end of the process; that the City should have a series of Citizen Reorg Listening Sessions up front (the same thing suggested during the Charter Revision project, where citizens offer ideas to consider than be constrained by a narrow agenda); that the City and the Administration needs to be more transparent throughout the entire process, and lastly, that there should be at least one female Council member on the Ad-Hoc Committee.

Council members appeared to be very reasonable and thoughtful during the meeting.

On the other hand, Mr. Burney, the City Personnel Director, did not appear to be respectful or cooperative, becoming red-faced and evasive for almost every Council question. Like pulling teeth. Our Council members should be included in a more transparent manner in a process that they ultimately have to vote on!

This reminds me of his performance during the Personnel Committee discusion about the Grant Writer vs. the Spin Doctor position the month before.

This reorganization is long overdue. Aligning all community services under one management structure is sorely needed. My only concern is that IT is under Finance and code enforcement is under economic development. I would have another column for operations, but that could likely trigger a budget increase. My concern is that code enforcement should not be viewed as a revenue source, which is the natural goal of economic development.

to much,to fast. everyone sit back AND TAKE YOUR TIME. we will survive if this is not done by june or july. council and THE PUBLIC need time to study this.

The speed with which the Mayor’s Plan is to be implemented further suggests its just a re-election ploy.
A Mayor with a business management background would certainly take more time. Especially if an outside consulting firm was hired. And without any estimates of cost savings every knows the Plan is just political fodder for re-election.

What is surprising is that our Common Council members object. But the Plan isn’t a real plan. Just politics. Maybe there’s hope for Norwalk yet. At the very least any Plan ought show substantial cost savings. Especially ahead of the Mayor’s re-election plans.

I have a somewhat different take on the proposed reorganization:

1: Any such radical change, certainly recognized as long overdue, should be subject to electorate review and approval.

2: Functionally, Department heads should report to an elected official, not an appointed one.

3: Operating improvement is best increased by raising competence levels, not by shuffling.

4: Careful and thoughtful study of any major organizational shifting is mandatory to prevent unintended consequences.
Jamming through such a change as currently proposed is not good business practice.

5: The current plan does not provide sufficient information to allow stakeholder review.

6: Increasing governance cost at the expense of the stakeholders at a time of income shortfall is ill advised.

Sue Hanie is spot on.

Their city side budget for next year is $354 million or roughly $2700 per person. https://www.newhavenct.gov/civicax/filebank/blobdload.aspx?blobid=31610

This doesn’t include education, which they get $154 million in ECS funding (state tax dollars) to pay for over 75% of their school budget with ZERO accountability for it to the taxpayers (US) who have to pay for it.

Not including education, our city budget is roughly $150 million. That’s roughly $1700 per person.

That’s $1000 per person more in New Haven. TO catch up with them and their wonderful services, we’d need to increase spending by $88 million a year. Of course we can not do this because unlike New Haven we actually foot the bill for our school system.

I’ve already stated the facts that our city government is growing while we are reducing education {…}, and it looks as if some want to increase this trend. Thankfully there seems to be an ounce of sanity left on the council by putting the brakes on this clear and blatant land grab.
Edited to remove an instance of ascribing motives without proof, a violation of the comments policy. https://www.nancyonnorwalk.com/comment-guidelines/

Thank you Bryan for that analysis. When Laoise King worked in New Haven, I guess we were helping to fund her schools. Giving her a direct raise and promotion in Norwalk feels like the closing of a circle. Maybe with all the time this reorganization opens up for the mayor, he can start attending BOE meetings.

This comment has been disallowed for ascribing motives without proof, insulting the writer and harassing the writer, all violations of the comments policy.
https://www.nancyonnorwalk.com/comment-guidelines/