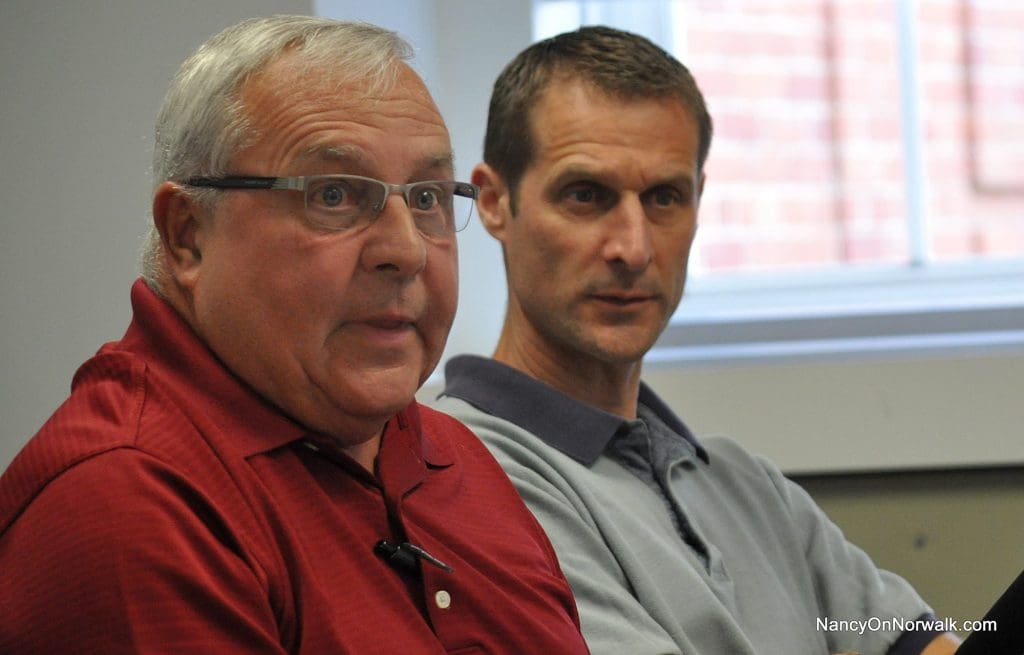 Michael Corsello (D-At Large), abstained, saying he supports the reorganization but would prefer it be implemented in increments.

“I came here to listen and be open minded,” Corsello said. “To me this is a learning experience, there’s a lot of moving parts to this. I just don’t want to put too many of them up in the air at the same time.”

“I think by holding up pieces we disrupt the whole coordination of everything,” Majority Leader John Igneri (D-District E) said. “… I feel you limit the potential for success by doing it a piece at a time.”

The Ad Hoc Common Council Committee charged with reviewing the proposed reorg moved it forward to other Council Committees June 27 after modifying it to omit a Chief of Community Services and a Chief of Economic and Community Development. Tom Livingston (D-District E) said at the time that the partial approval would keep the process moving, and the committee could revisit economic development.

Rilling invited three city administrators present at Monday’s meeting to speak to Council members regarding any concerns with the proposal, which would have them working under a new Chief of Economic and Community Development.  Norwalk Chief Building Official Bill Ireland, Planning and Zoning Director Steven Kleppin and Administrative Services Manager Kathryn Hebert answered questions from Council members, expressing no objections.  Hebert is the staff person to the Parking Authority.

“This is an opportunity for all of us, from you guys’ perspective as well as ours, to understand where there may be some deficiencies we can address, or if it’s all hunky dory,” Livingston said.

Livingston asked Ireland what he sees as the biggest impediment to doing his job.

Norwalk used to have a permit coordinator, but ceased to have one after the “big purge of 96,” Ireland said.  The late Frank Esposito was Mayor in 1996.

The permit coordinator was a full-time employee who handled every application for a permit, guiding applicants through the system and overseeing the process, Ireland said.  Under current practice, applicants get a Zoning permit and then come to Ireland’s office only to find out that their proposal doesn’t meet the building code, and “that’s where a lot of the complaints are.”

Creating a permit coordinator would be the responsibility of the Chief of Economic and Community Development, Director of Personnel and Labor Relations Ray Burney said, adding that “It’s definitely something everyone thinks we should have but we don’t. The chief of this department is in charge of that responsibility, make it happen, figure out how to do it with the resources (that are available).”

A permit coordinator would be a “big step,” Kleppin said, agreeing that the current system, where applicants go from department to department, is not very efficient.

“I have had past experience where I have signed off and the person has left my office, gone to a different department with a different set of plans, and then when they come back later on, the end product doesn’t look anything like what I signed off on,” Kleppin said.

A permit coordinator is one idea that’s been suggested and there have been others, with Council member Doug Hempstead (R-District D) advocating for a permit center, Assistant to the Mayor Laoise King said.

“The conclusion that we came to was that this would be the type of thing, as Ray said, that we should leave up to a new chief of community and economic development, who is working with all these departments to do an in-depth guide with all the departments who do permitting to figure out what is the best way to make the process smoother and easier for residents,” King said.

Committee Chairman John Kydes (D-District C) asked Ireland if everything would run the same in his department under the reorg, with the only difference being he’d be reporting to someone else. Ireland said yes.

There’s a “glaring hole on economic development,” Kleppin said, explaining that his role would be to make sure his department is in lockstep with that effort.

Economic Development Director Elizabeth Stocker left her position in December, under what Rilling called a “mutual understanding.”  The position has since been vacant, with Rilling expressing a desire to take the city in a different direction, with different goals.

The economic development director has in the past been focused on the urban core, but should “have a broader understanding how to develop all areas,” King said.

Asked what his department’s biggest need is, absent the reorg, Kleppin said he was looking forward to having a new employee on staff in about a month to handle “mundane administrative things” and “free up the technical staff to do technical work.”

Kleppin was referring to a new position created in the 2018-19 operating budget.

In the course of answering questions Hebert said she and other department heads have been working together because they’re team players. The reorganization would create a structure that would force department heads to work together, no matter what their personalities are, she said.

Livingston asked Hebert if she saw problems moving transportation, traffic and parking out from under the Department of Public Works and over to Economic Development. She said she didn’t.

“I do think the economic development component is critical to the city,” Hebert said. “I have been here a long time, I think it’s important to have someone that can work with all the department heads who are going to be under that person, to bring that forward.”

Kydes asked the Committee if it wanted to move the proposal for a Chief of Economic and Community Development forward.

“I think it makes a lot of sense. I haven’t heard any objections. I think the key, of course, is to find the right person,” Livingston said.

Rilling at the meeting addressed the idea of a more gradual implementation of the reorganization, favored by Corsello.  “It’s hard to evaluate the whole when you are looking at individual little parts and the other parts are still not in place. The whole idea is to bring everybody into an area where we have these groups of people assembled who are performing like functions, and then reporting to me,” Rilling said. “… Implementing it piecemeal would delay the full implementation probably by six months or more. That will not enable us to evaluate the whole.”

The Norwalk Branch NAACP (National Association for the Advancement of Colored People) has objected to the Chief of Community Services role because it would merge Fair Rent with Fair Housing.

The Personnel Committee is set to discuss the reorg Wednesday.

That our Mayor and Common Council haven’t called in Professional Consultants to advise on a Reorg speaks volumes. Afraid of what the Professionals might say ? That an Economic Director from tiny Newtown w/o any development to speak of was hired by the Mayor and Council speaks loudly about their understanding of the City’s proper role in encouraging business development. For a commuter City with 90% of its Grand List in housing that’s an astonishing lack of professionalism. Not only do our Mayor/Council avoid using Prof. Search to secure Top Talent but they avoid securing Consultant Expertise on how to better manage City Hall. Norwalk’s punitive taxes, falling property values and long stagnant Grand List together suggest a serious review of how City Hall is managed. In our One Party City not much chance of such a review.

This is what a lopsided ‘group think’ council gets you. The lone voice of reason last night, Michael Corsello – but the deed was already done.

The ‘hole in economic development’ is having a mayor with absolutely no financial acumen, business sense or vision. Also, what did council members expect to hear from staff with their boss sitting in the room? “No, we think this ‘reorganization’ and hiring of more ‘chiefs’ is rushed and a stupid idea?

The comments or hope that some ‘outsider’ or more likely ‘insider’ is going to come into the Economic Director job and ‘save’ Norwalk from this mayor’s desperate actions is highly unlikely. Like our current president, isn’t there anybody in the party willing to challenge him?

Criticizing Mayor Rilling’s lack of business experience doesn’t move the needle. Our other Mayors were similarly without business experience. What’s new is the absence of business management experience among our Common Council members and their willingness to act as “Rubber Stamps”. As long as both our Mayors and Council members refuse to demand Prof. Search be used to secure Top Talent and demand Administrators do more with fewer resources Norwalk will continue to remain a failing City with stagnant Grand List, falling property values, punitive taxes and exodus of long time homeowners.

The choices for major improvement come down to either changing to a Professional Manager or encouraging residents with major business experience to come forward to volunteer for City service. Neither prospect is likely as long as we remain a One Party City indifferent to failure and committed to the well being of our public Unions who mostly live outside Norwalk over the interests of taxpayers.

Like CT taxpayers Norwalk taxpayers will have endure onsiderable more punishment until they take back their City from politicians poorly experienced to run a $400 million City budget. Odds are that few of us here will ever retire here. So we know our future.