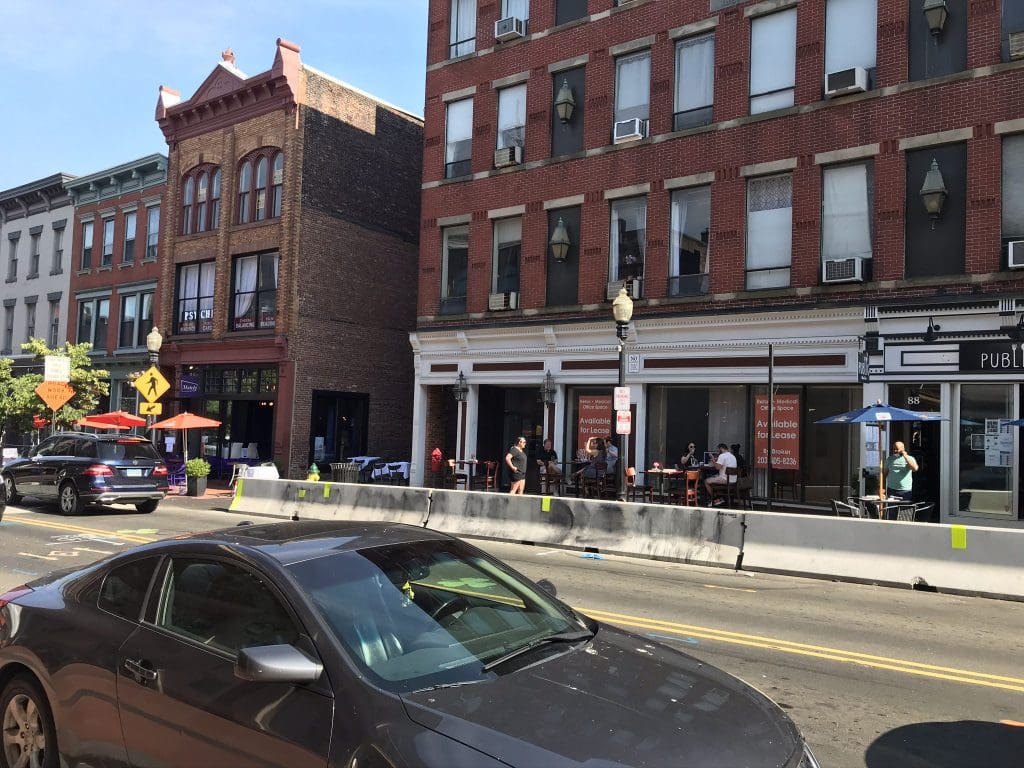 NORWALK, Conn. — Outdoor dining can remain a thing in Norwalk even after the COVID-inspired permissions expire in March, under an ordinance being considered by the Common Council.

“We don’t want outdoor bars in the city of Norwalk,” said Norwalk Chief of Economic and Community Development Jessica Vonashek, after explaining that the Norwalk Police Department “feels really strongly that food and beverage should really go together, regardless of what the timing of the day is and what the situation is.”

“I don’t know how we can craft an ordinance to tell a guy that ‘OK, you’re not hungry, OK, you have to leave.’ And I don’t know what to say,” Council member Thomas Keegan (R-District D) said.

Other thorny details include the difference between “directly contiguous” and “directly adjacent,” and the definition of “restaurant.” Parking requirements would not be waived; a restaurateur would not be able to use their entire parking lot for outdoor dining if those spaces were required by Zoning.

When COVID hit, Gov. Ned Lamont signed an executive order allowing “outdoor dining regulations to be lifted to a certain extent,” aiming to allow “restaurants to get to 100% capacity because of course, the governor and state had restrictions on capacity indoors,” Vonashek explained.

The order was extended several times and then the General Assembly passed legislation adopting the regulations in the executive orders.

That legislation expires March 31, she said. “Essentially, what we’re trying to do here is take our outdoor dining ordinance, that was written many moons ago and has antiquated language in it, and update that ordinance to be able to include the pieces that we want moving forward, knowing that the piece of legislation expires on March the 31st.”

The drafted revisions “peel away some of the nuanced enforcement from the actual ordinance itself” and instead marries the ordinance with a guideline document, that would give staff “the ability to be nimble” and “be a little bit more responsive to what’s going on out there,” Vonashek said.

Guidelines have been drafted through input from the Department of Public Works, the Health Department, the police department, Planning and Zoning, Code Enforcement and TMP (Transportation, Mobility and Parking), a “due diligence” that included “using examples of what other communities are doing so that we’re in line with those,” she explained.

While the Committee started its meeting with a goal of holding a public hearing in January in hopes of making the March 31 deadline, Council President Tom Livingston (D-District E), acting on behalf of Ordinance Committee Chairwoman Lisa Shanahan (D-District E), ultimately moved to send the draft back to the legal department to work out the issues Council members haggled over.

Livingston kicked off the discussion by questioning “sponsoring restaurant.”

While the phrase is “duplicative,” the issue is the “difference between retail outdoor retail versus an outdoor dining,” Vonashek said.

“I think retail can go through encroachment permit or can go through a special event permit. But my thoughts are restaurants, cafes, coffee shops, kiosks, stalls, but I think that we need to delineate … what goes under that sponsoring restaurant versus what goes out under the outdoor dining,” she said.

State government didn’t use “sponsoring restaurant,” she said, suggesting that the ordinance could use whatever language the legislature had.

Lamont’s executive order said “restaurants” and “retailers” because of COVID’s impact, Assistant Corporation Counsel Brian Candela said. “We’re trying to tailor this ordinance specifically to one of the two, to the restaurants and not the retailers.”

The phrase “outdoor activities” needs to be tossed because “outdoor dining means that the restaurant can serve patrons on their patio, not that they can have a band, have a bar” or a “cornhole tournament,” Vonashek said.

“I’m worried about dumb litigation,” Council member Josh Goldstein (D-At Large) said. “And, you know, some renegade restaurant owner says, ‘Well, why can’t I do this? It’s an outdoor activity.’”

As for “adjacent” and “contiguous,” a sidewalk right in front of the restaurant is “adjacent” while outdoor dining in front of a neighboring business would be “contiguous,” Vonashek explained. Even if they have neighboring businesses’ approval, “We don’t necessarily want a restaurant running food up and down the street, three or four businesses down the road.”

While people don’t want outdoor bars and the police department strongly desires people to eat food with their alcohol, it gets into a grey area.

Assistant Director of Health, Environmental Health William Mooney said, “Part of the problem is that we don’t want people just having four guys drinking beers around some nachos. I want to kind of avoid that as much as possible. It gets to be a slippery slope between, you know, what’s a meal and appetizers, so it’s hard to really kind of nail it down. But it’s important to do so.”

“There’s also sort of the exercise of ordering the least expensive thing on the menu to have it sit on the table while having drinks around it as well,” Vonashek said.

Trying “to make making an ordinance or any law or statute fit everything, I mean, is virtually impossible,” Keegan said.

“We’re trying to help out the restaurants, right. And so we’re not going to be able to solve every problem,” Livingston said.

“This a really tough one to navigate,” said Council member David Heuvelman (D-District A). He asked about jersey barriers on the street, used to define outdoor dining areas, and Vonashek’s recent talk of parklets. 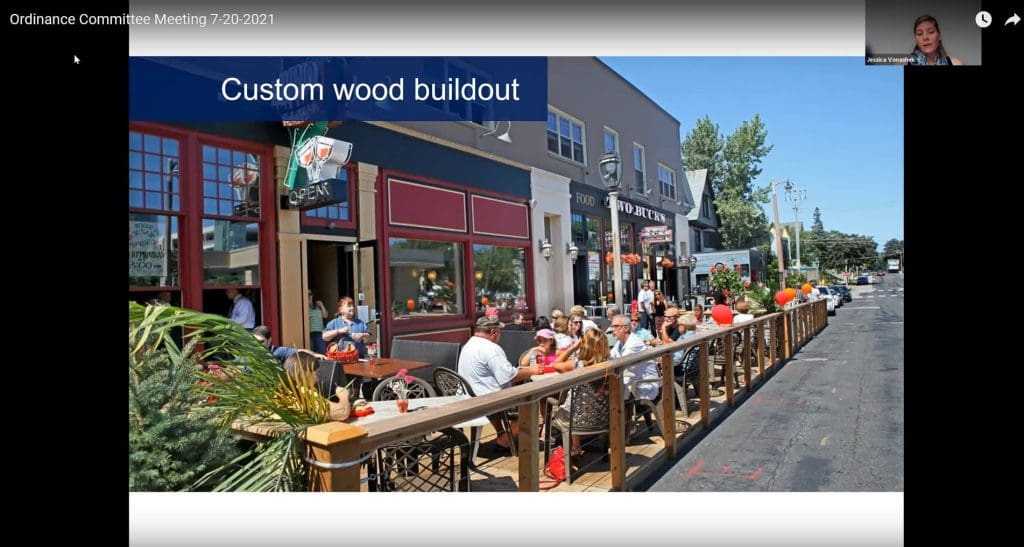 Parklets are on hold while the ordinance is reworked, as a “building block exercise,” because the ordinance is necessary as a foundation for a parklet program, Vonashek said Tuesday. They’re addressed in the standards manual with the phrase, “the city of Norwalk May, from time to time, introduce new outdoor dining programs.”

Police are concerned about jersey barriers, which made it more difficult for them to enforce behavior guidelines, Vonashek said.

“I can’t imagine how enforcement is going to police whether every table has ordered an adequate amount of food in ratio to their alcohol,” Council member Nora Niedzielski-Eichner (D-At Large) said. “I would think that if the problem we’re trying to get at is too much noise and too much drinking too late at night, that we simply cut the outdoor dining off” at an appropriate time,

“To Mr. Keegan’s point, maybe Nacho sales will go up because of this,” Council member Dominique Johnson (D-At Large) said. “But I just know I’ve heard from like Norwalk residents saying that they felt their neighborhood kind of turned into a party zone over COVID. So I understand that, I know you’re trying to respond to that as well, too.”

There are “enough little open issues” to continue revising the draft and resume discussion in January, Livingston said.

“As much as we all dislike it, we’re still sort of in COVID situation,” Vonashek said. “And so we need to be in a position where we’re really supporting the small businesses and the restaurants out there and making sure that they understand what the regulations are and what the ordinances and be able to help them navigate that.”