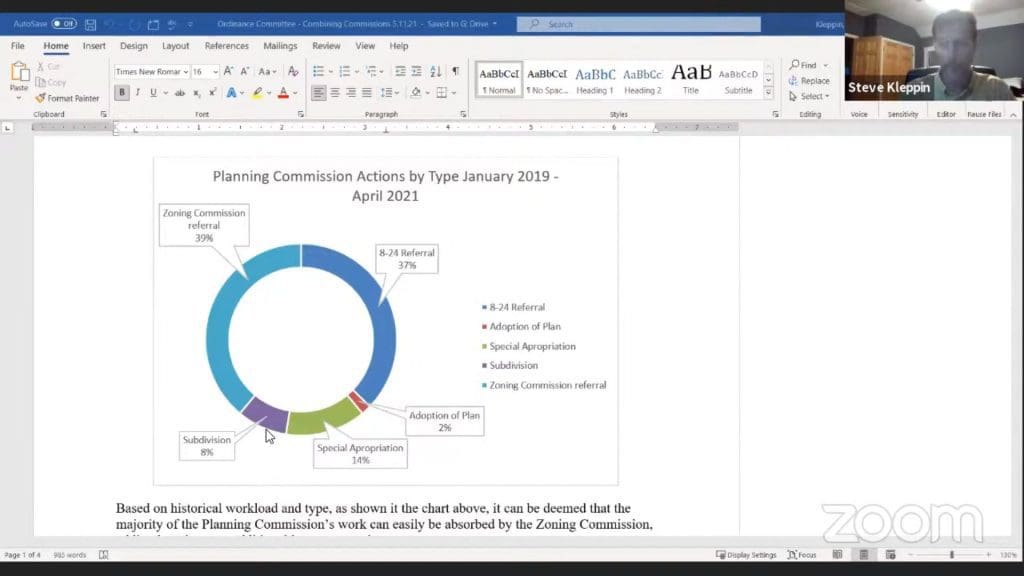 NORWALK, Conn. — No muss, no fuss, no fanfare: the Common Council has voted to merge the Planning and Zoning Commissions, effective in January.

There were no public speakers addressing the Council on Tuesday ahead of a unanimous vote, on an important but obscure topic that hasn’t caught the attention of the citizenry.

“This is an item that’s been discussed by many of us often on for years,” Council member Tom Livingston (D-District E) said Tuesday. “But with the recent completion of the POCD the ongoing with a current rewrite of the city’s zoning regulations and the support of the Mayor’s Office, it seemed the right time to move forward.”

The POCD, or Plan of Conservation and Development, is also referred to as a 10-year city-wide master plan.

“The city had separate Planning and Zoning Commissions until 1971 when they were combined, following a charter amendment. They were then separated in 1988…. my investigation suggested they were separated for political reasons,” Livingston said.

The reasons to combine them now are the same as they were in 1971, he said. “All decisions related to the physical development of the city should be based on a consistent set of policies and goals. Right now, you have a system where, as was pointed out one of our meetings, one hand doesn’t always know what the other is doing.”

Planning Commission meetings often stray into pointed questions not related to the actual decision to be made. Planning and Zoning Director Steven Kleppin recently snapped, “You wonder why some things should get merged? Because we’re three hours in on a three-item agenda, which should have been done in an hour and a half ago. It’s just, what a waste of time.”

The Commission spends much time formulating a capital budget early in the year, only to have its changes regularly reversed by the Mayor.

The new P&Z Commission will feature nine members and three alternates, while the current commissions have a combined 15 members.

Citizens who objected to the merger cited the workload involved. Changes authorized by the Council on Tuesday include a lightened role for the new Commission when it comes to the capital budget. It will strictly consider whether a capital budget request is in conformity with the POCD. If the Commission decides it isn’t, then the Common Council would need a two-thirds vote to authorize the expenditure.

Subdivision applications have greatly dwindled, Kleppin said. The Planning Commission develops the POCD but no one’s going to have to start working on a new POCD for six years. A subcommittee will handle the capital budget.

Not sure why we bother with this. Nancy, you may not be intending to, but you’re participating as a cog in the NIMBY machine by relentlessly providing them with fodder and opportunities to be the annoying little squeaky wheels they are.

Might as well cue all the NIMBYs complaining right now about how some structural reform is basically the death of “Norwalk as we know it”, and “ZOMG SEE WE’RE ALL GONNA BE TURNED INTO STAMFORD NOW!”.

Spare me. Please. Spare us all. Norwalk will continue along whatever sad track of evolution it was moving towards, and people will keep complaining about pointless NIMBY stuff, unless we make the structural reforms that ACTUALLY matter. Norwalk needs multiparty reforms to shake up our stagnant politics and disempower/disembolden all the morons out there who just want to impose their national-level tribalism on Norwalk’s politics.