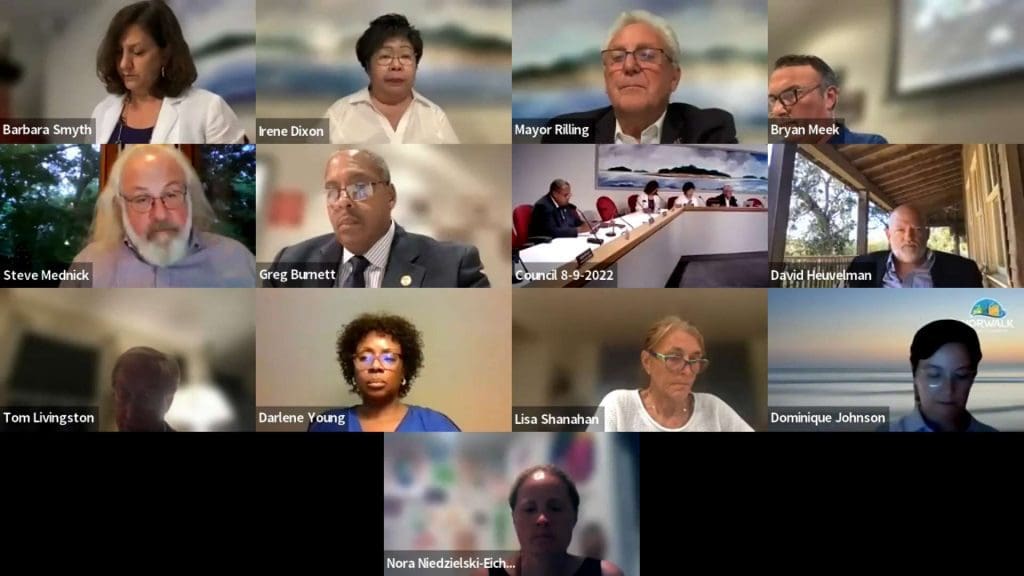 NORWALK, Conn. – Norwalk’s charter is set for a long-overdue overhaul, with a public revision process beginning in September.

The Common Council on Tuesday unanimously voted to formally establish a Charter Revision Commission. Members will be named in September with the goal of presenting proposed changes to voters in November 2023, Council President Tom Livingston (D-District E) said.

Norwalk’s singularly backward charter hasn’t had a comprehensive revision since it was written in 1913. There’s a “desperate need” for a Charter Revision Commission because the charter is “all over the place,” Betty Ressel said in March when presenting Evergreen Solutions’ efficiency study to the Council.

A charter is a blueprint, a document to establish accountability for government officers and administrative functions, Attorney Steven Mednick said in April.

In April, the Council awarded Mednick a $100,000 three-year contract to guide the charter revision process. Since then Mednick has reportedly worked on reorganizing the charter to make it more user friendly, for example taking the many passages that refer to the Mayor and putting them in one place, to facilitate the process.

“The principle charge for this Commission will be to undertake a review of our charter and make it more accessible and understandable to our residents and useful on the day-to-day governance of the city,” Livingston said Tuesday. “But the Charter Commission will also have broad authority to go beyond that … they will have open meetings for residents and elected officials like to speak before them and submit their input.”

In addition to reorganizing the charter, “the commission shall review all aspects of the structure of city government as part of its overall charge,” the resolution read by Livingston said.

The Council will appoint five to 15 electors, up to a third of them public officials. A “bare majority” shall be from one political party. Under an amendment to the original proposal suggested by Livingston, the Council may appoint the Commission’s leaders rather than allow the Commission to elect them itself.

Council members David Heuvelman (D-District A) and Barbara Smyth (D-At Large) spoke up in support of the resolution, calling it long overdue.

“It’s important that this work is not going to be done in a vacuum, and we want the community to be involved,” Council member Greg Burnett (D-At Large) said, inviting citizens to contact their Council members with suggestions.
In 2016, a charter revision effort failed at the ballot box. It would have eliminated four elected positions that serve no purpose but the proposal to extend the Mayor’s term from two years to four years inspired much resistance.

Mayor Harry Rilling has sailed to reelection in every cycle since then.

“I really applaud the fact that we’re doing this again,” Rilling said Tuesday. “But we all know how convoluted and difficult our charter can be. And I know it’s something that we expect the Charter Revision Commission to make great inroads, but I believe this should be an ongoing process. We should always be reviewing our charter to make sure it’s up to date, make sure there’s no complications, make sure we’re consistent with law.”