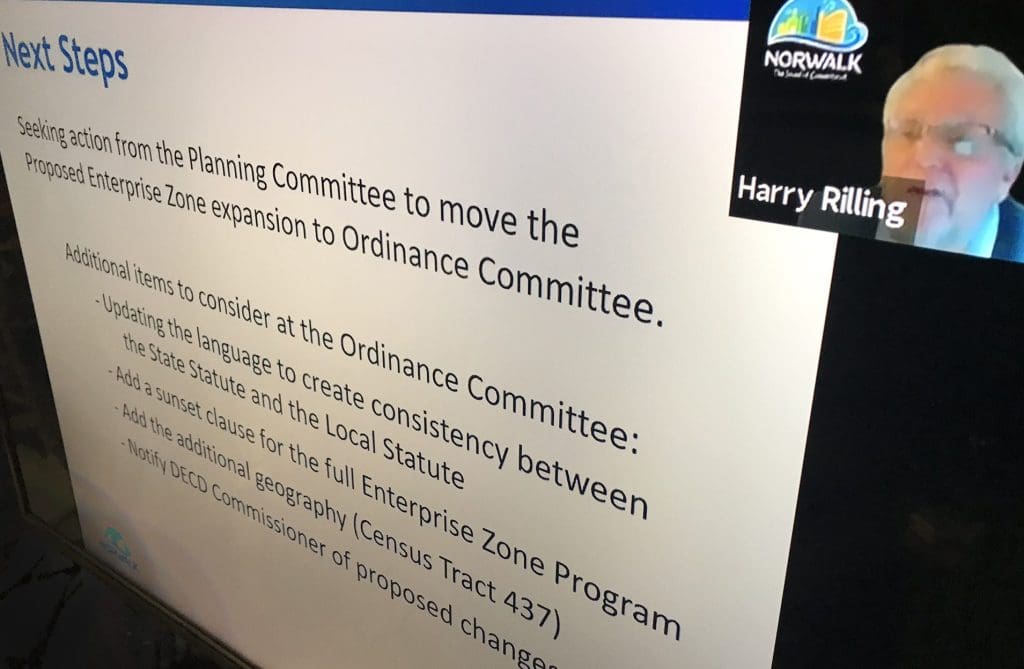 NORWALK, Conn. — Norwalk is resuming its push to expand its Enterprise Zone from SoNo to the Wall Street-West Avenue area. City officials say it’s needed more than ever, given the economic devastation brought on by COVID-19.

“We are in a situation right now, where we have an economic downturn of huge proportions,” Mayor Harry Rilling said to Common Council Planning Committee members Thursday. “We do not know what’s going to happen to the economy over the next couple of years. But we certainly know we’re in a very, very dire situation right now. We’re going to be looking for projects and programs that create jobs that help our economic recovery in the area, and hopefully, a lot of the local contractors will be put to work.”

The Committee unanimously voted to send the proposal to the Ordinance Committee.

“The Enterprise Zone Program is a program where and area which local tax incentives are offered to encourage business investment jobs for residents into disadvantaged census tracks,” Norwalk Chief of Economic and Community Development Jessica Casey explained.

The SoNo Enterprise Zone has been a success, in that the projects that have been given tax incentives through it are contributing more to the City than they were before they were improved, she said, going over information covered by NancyOnNorwalk in October.

“In the three years of property taxes, we’ll have more than covered what there was previously,” she said. “But in addition to that, the hotel is operating, before the COVID-19 pandemic, at around 80 percent occupancy, meaning more than 400 people are staying in the hotel each and every night in SoNo, which is what we would like the Enterprise Zone to do.”

Casey spoke of expanding the Enterprise Zone to the Wall-West area in December. Now, “it will act as a catalyst to bring in that private investment that we so badly need,” she said Thursday.

The Ordinance Committee should consider a sunset clause for the entire Enterprise Zone program, she said.

She didn’t forsee any problem with getting State approval.

“I think that now more than ever, the State’s going to be looking for municipalities to step up and use economic tools that they have the ability to be able to spur economic development in Connecticut, and I think that this is one of those tools,” Casey said.

“I fully support this program,” Rilling said, pointing out that his administration has been “looking at ways to incentivize various areas of the city through TIF programs or other tax incentive programs, and certainly the Enterprise Zone expansion.”

“There’s been a lot of misinformation spread out there about tax incentives, and how it becomes a burden on homeowners, and it shifts the burden of taxes onto the homeowners and homeowners will be subsidizing the developers,” Rilling said. “None of that is true. I don’t know whether there’s intentional misinformation, or whether people just don’t truly understand what a tax incentive program is supposed to accomplish.”

Taxpayers – you want to protest something – then protest this!

Covid19 will eventually take the lives of over 1000 Norwalk residents. A tragedy that will linger for years. But what the mayor is pushing here – will be far deadlier to the city. The effects will last generations.

I know it seems like it to Harry – but not every person who lives in Norwalk is a contractor.

Hey Harry – when are you cutting staff? Suspending raises and taking pay cuts? Furloughing unnecessary workers? Why does the private sector – which you note here with dire predictions – why is that group the only one that suffers? When did municipal workers become royalty?

This group just nonchalantly passed a 4% plus budget hike – in the beginning (not middle, and sure not near the end) of a global pandemic. And now – they want to give away tax dollars. This is the CT municipal playbook for the soon to be dead city. Yea – what Norwalk wats to be is Bridgeport, New Haven, Waterbury, and Hartford. All shining beacons of what a great city doesn’t look like.

Using tax incentives to boost economic investment can be a good tool if it is used wisely and surgically. When you have a complete shut down of economic activity, incenting developers to build apartments probably isn’t the correct use. Extending the zone just so that it benefits crony developers to do projects they have always intended to do is a really bad idea.

That is exactly why most people think this is taking money from residents and giving it to developers…because it is. No additional development will be gained, but more profit will flow…money has to come from somewhere….

Unfortunately there is no one left to stand up to this corruption. The council doesn’t even seem to rise to the level of rubber stamp…they actually believe the nonsense they are fed, that is how pitiful they are.

More apartment buildings that Norwalk doesn’t need, more density that Norwalk doesn’t need and more traffic that Norwalk doesn’t need. Let’s try something new from city hall. How about throwing me some tax incentives for my property that continues to go down in value as my taxes go up. You expect me to believe for a minute that the tax incentives to subsidize the builders does not subsidize the builders of course it does that is why they contribute so much money to your re-election, we are not all stupid. Soon there will be plenty of empty buildings in Norwalk including the mall that you can turn into apartments that we don’t need or want. This administration ruined a once nice city. Thank from a taxpayer.

Why do we continue to put with Rilling? Zero business sense. Patrick Cooper is spot on.

If the developer feels there is a viable project why should we give them a tax incentive? My second question is how willing are people going to be to continue to want to live in high density housing?

Like many things, enterprise zones are great in theory. In practice, they are just another scam used by developers to game the system.
Do just a little research.

By looking at the number of new development vacancies I would say apartments are thriving in Norwalk. Its about the only thing able to pay rents and taxes during Covid-19 era. Commercial and office space is continually on a downward spiral. New residential developments are able to pay (at least 80%). They are able to pay because they can work from home. This is 2020. Wake up and smell the millennial’s. All this information is common sense. Not some blurred political party line nonsense.