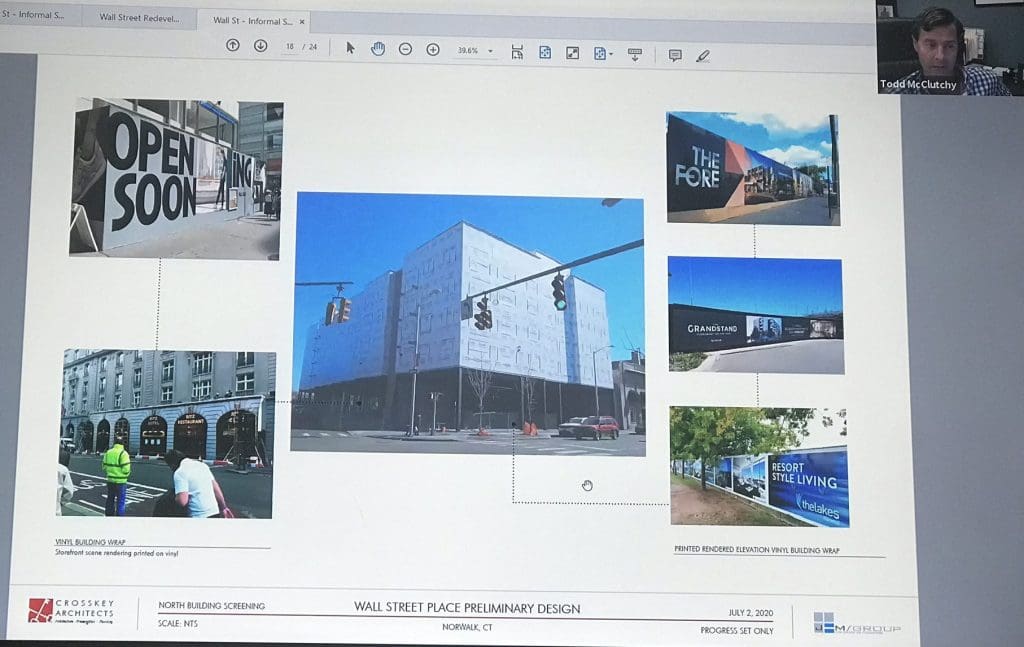 Todd McClutchy of JHM Group, upper right, shows off ideas to dress up “The Tyvek Temple,” Thursday on Zoom.

NORWALK, Conn. — The revised plan to restart construction on Wall Street Place moved forward Thursday, over the objections of two citizens and to the praise of multiple others.

“POKO” will come before the Common Council on July 14 and would then need to be approved by the Norwalk Zoning Commission, if the Council gives it a green light. Attorney William Hennessey, representing probable redeveloper JHM Group, acknowledged that it’s likely the project would then be held up for years by a legal appeal, but said, “We will prevail.”

Even so, a Council green light would mean that the “Tyvek Temple” would be looking better. Todd McClutchy, of JHM, said the company is looking into screening options.

JHM would secure the building, then complete its exterior and make it watertight, John McClutchy said. The sprucing up would be done before the final approval from Zoning and could include renderings of the expected complex, Todd McClutchy said.

Wall Street Place would feature two buildings and much “affordable housing.” The plan for 61 Wall St. is unchanged from what was presented a year ago – 101 apartments available to people who make less than 80 percent of the area median income (AMI) – and retail on the first floor. What’s different is the plan for 17 Isaacs St., now home to the Garden Cinemas. Instead of a two-story parking garage, a four-story building is planned. The upper two floors would be apartments.

While documents presented last week indicated that these additional 50 units would be market rate, Hennessey said he’s since been told by Planning and Zoning Director Steven Kleppin that the building must have 10 percent affordable housing, in line with the regulations. That’s being worked out, Hennessey said. 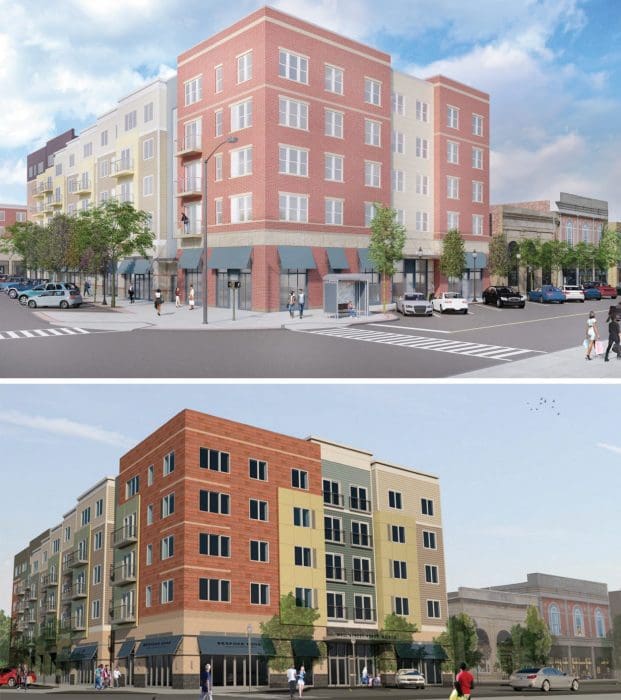 The revised plan was made in response to community objections. In addition to complaints about 100 percent affordable housing, the proposed building didn’t look like it belonged on Wall Street because “it was too modern,” Hennessey explained. And residents wanted the development to encourage the arts district that’s been developing in the neighborhood. They decried the loss of the Cinemas – Hennessey pointed out that independent movie theaters are struggling to survive the pandemic – and JHM worked with the Norwalk Arts Commission to address that concern, agreeing to lease the Commission 900 square feet without charge.

But that space isn’t only the start, Todd McClutchy said. The basement space is unaccounted for and the corner unit designated for the arts is next to a stairway and elevator, “So if there’s a demand and desire and a business plan that fit properly, there’s an opportunity to expand that (into the basement area)…. we have the ability to do much more.”

The parking garage would be dressed up at ground level by artwork, making it obvious to anyone looking down or driving down Isaacs Street that there’s dynamic arts activity down the road, Todd McClutchy said.

Although there’s been no vote yet, the Norwalk Arts Commission is “very excited about the idea,” Chairman Marc Alan said. Vice Chairman Peter Smyth concurred.

“I think that this is a unique opportunity for the city to have a real arts district for the first time. It’s all about critical mass this this space with SPAG and with the things that happen at the library and Rene Soto Gallery, it will really give a feeling of an arts district kind of zone,” Smyth said.

He sees the corner space as a multi-use facility where movies could be shown, along with lectures, and be the home to poetry slams, art shows and music performances, without competing with other facilities in Norwalk, he said.

McClutchy said the other part of the idea is that the new four-story building wouldn’t be “just a stark building on the corner across from a brand-new spectacular 61” Wall Street. “This is meant to bring additional residential bodies, whether it’s supposed to activate the street and bring a combination of parking resource that is desperately needed for 61 Wall as well as bringing people to … Wall Street.”

As for the high rate of affordable housing, McClutchy said, “Those people will be housed rightly with their income. So they will have disposable income to go out and enjoy the  benefits of retail and businesses and in restaurants in the area.”

“Only 34 of the 151 units are truly affordable with rents ranging from $1,083 to $1500 dollars per month. Those 34 are the only ones that are below market,” said real estate broker Jason Milligan, making a typically colorful appearance even if he couldn’t be seen in the Zoom format.

Milligan decried the “affordable” rates by comparing them to his own property, across the street from The Tyvek Temple. A one-bedroom apartment in the former Treasure House averages $1,650 a month, he said, before arguing with Planning Committee Chairman John Kydes (D-District C) that he should be allowed to speak for more than five minutes, while other people were kept to three.

Norwalk Housing Authority Executive Director Adam Bovilsky presented many statistics in support of his conclusion: “The need for affordable housing in Norwalk is tremendous and greatly outstrips any supply that we have.”

“This project serves a critical need for affordable housing generally, but particularly in the 40 percent of AMI range,” Bovilsky said.

While Donna Smirniotopoulos besmirched the planned development as bringing in children who will need to be educated, Council President Barbara Smyth (D-At Large) said “families are very remiss to move their kids, when they’re school aged, out of town.”

“I think what’s more likely is that it’s going to provide a decent home for already families who are already living in Norwalk,” Smyth said. “It gives them the opportunity to move out of a less desirable situation into something decent.”

Smyth, a teacher, said, “I have many, many teacher friends who cannot afford to live in Norwalk, and there’s a lot of people who you know, who have decent jobs, but you know, it’s a very, very expensive place to live. And so this really offers housing for, you know, just regular people.”

Questions from Council members touched on the arts component as well the language of the agreement – Tom Livingston (D-District E) stressed a need to prevent another failed project – and on Isaacs Street itself, with David Heuvelman (D-District A) confirming that it will be a two-way street.

The Planning Committee then voted unanimously to send it to the full Council. Kydes said JHM, with the help of community input, had “made lemonade out of lemons.”

“I think I’ve learned the meaning of patience with this project, that is surely without a doubt,” Kydes said. “After six years of ups and downs, negotiations back and forth, a year and a half – two years ago, we had a very promising project in front of us, a project with a few asks that the Council put upon Mr. McClutchy and Citibank. I feel at this point you not only obliged those asks but you surpassed them … I know there’s gonna be a lot of folks that are really busy on Facebook right now saying otherwise but someone that’s been involved in this project for almost eight years, I can say this is this is more than I could never have imagined.”

Not sure I agree with Mr. Bovilsky in context that “The need for affordable housing in Norwalk is tremendous and greatly outstrips any supply that we have…..particularly in the 40 percent of AMI range,” The question I would really like to ask Mr. Bovilsky is why there is such as need and at this level of AMI in particular? What happened?

To that I offer one likely cause – poor policy.

The facts on the ground are the Norwalk has a very large component of affordable housing well in excess of the state mandated 10 percent. However, the bulk of this is not deeded affordable (as in has to remain affordable due to tax incentives). But it has been affordable for generations. This is the 2-6 family homes that has long housed Norwalk’s working class who now find themselves being squeezed out.

Poor policy has skewed the market. Over the past decade a lot of this affordable housing has been taken up by recent immigration, most notably since 2014 as we can see by the dramatic uptick in ELL students since that time. This has allowed landlords to raise rents while skipping on the repairs, not adhering to occupancy rules etc. because they know the newly arrived tenants wont complain to much, if at all. The City obliged by not enforcing the rules on its books citing manpower issues.

Therefore, if we did not have such an influx of recent immigration there would be far more affordable apartments available. This in turn would create more competition among landlords to attract the available renters. Essentially requiring landlords to “up their game” and take better care of their properties. This would result in a higher overall quality of the affordable housing stock locally coupled with a more balanced demand for such housing.

And this could have resulted in the our not having to subsidies 106 units of affordable housing to be built at an astronomically crazy cost right smack in the middle of our downtown.

Mr. Bovilsky, do you think we could ease the housing pressure in the 40% AMI range with better policy? And if so, what changes would you recommend? Of if not, why not?

Would anyone in Planning, appointed or staff care to comment on why we are having such an expansion of 40% AMI?

Is this good for Norwalk?

Do you plan on expanding the population of 40% AMI?