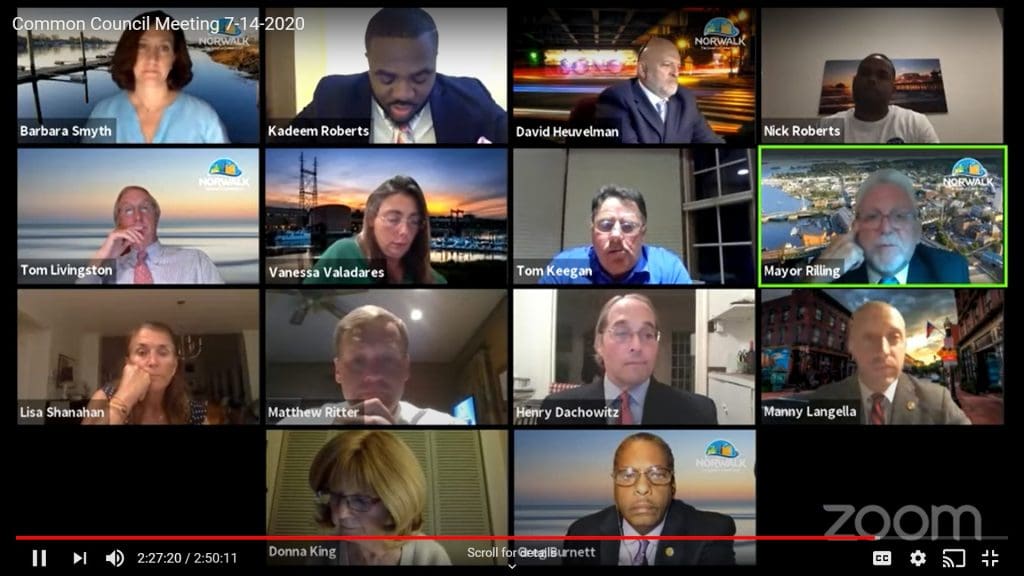 “We are in a unique market environment,” Dachowitz said, describing something he’s never seen in his career: “taxable interest rates are lower than municipal interest rates.”

His department worked with the City’s financial advisor and investment bankers to identify about $44 million of bonds that are eligible for refunding through taxable bonds. The 2017 Tax Act eliminated advance refunding of tax-free bonds, which occur when tax-free bonds are not yet callable, but Norwalk’s expected refunding via taxable bonds avoids that restriction, he said.

So, using the July 1 interest rate calculations, Norwalk would earn “a present value savings of 2.9 million or approximately 6.66 percent of the amount refunded,” he said.

Norwalk will first issue $42 million in new bonds to fund the current year capital budget, Dachowitz said. But with the refunding, “Obviously market rates dictate what we will actually save. Everyone is predicting a continued long duration of low interest rates. So we expect that to do well…. We expect to close this deal in the beginning of August.”

Editor’s note: Story corrected at 1 a.m. Friday to indicate that the 2017 Tax Act eliminated advance refunding of tax-free bonds, not all refundings, per Mr. Dachowitz.

The plan to hold drive-in high school graduations at Calf Pasture Beach is off.

Since the plan was announced, the state’s reopening plans have changed other states continue to see a rise in COVID-19 cases, Norwalk Public Schools said in a statement.

“And as you may have read in the news, a similar drive-in graduation in nearby Chappaqua resulted in over 25 confirmed cases of COVID-19,” NPS said.

So instead of the beach ceremony, each high school is planning its own drive-through ceremony at their own campuses.

“In response to the feedback we received from CGS and P-TECH students, those schools will not have individual graduation ceremonies this year, but will instead participate together with their fellow graduates from Brien McMahon and Norwalk High,” the statement said.

“The COVID-19 coronavirus has robbed our senior class, the 2020 senior class, of their full senior class experience, and it’s a very, very sad thing,” Rilling said at the Council meeting. “We’ve all been going through some very difficult, frustrating times.”

“We’re confident that we will be able to provide for our two senior classes, a graduation experience that of which they can be proud, but also it’ll be unique, and they will have a story, a story for the rest of their lives,” Rilling said. “So stay tuned. We’re hoping that we can make an announcement very, very soon.”

A small segment of Chestnut Street, from Monroe Street to Merritt Place, will be renamed Officer Cesar Ramirez Drive due to unanimous Council approval of the request.

Council members amended their street renaming ordinance to allow Ramirez to be honored, less than a year since his passing in January.

“I fully support the importance of city ordinances and our responsibility to uphold them but we also feel like this is a special circumstance,” George Tsiranides (D-District D) said. “Officer Ramirez was a big part of Norwalk, not just as a police officer, also with his voluntary work with kids, with volunteer work with other youth programs and also on the Housing Authority. I feel like this is going to be a little bit of closure for his family, a lot of the residents that loved him.”

Ramirez was diagnosed with an aggressive form of brain cancer in December.

“It was a very sad day indeed, when we found out that he was ill,” Mayor Harry Rilling said. “But he has done so much for so many people in the community, giving so much of himself not just in his police function, but in so many other ways, helping the Hispanic community when it came to the holidays and passing out food and gifts, and just doing so many things. I don’t think I ever saw Cesar at home. I think he was always out in the street somewhere doing his due diligence and doing so much for so many.”

“Cesar knew everyone and everyone knew Cesar. And I think this tribute amongst many others is our way of saying thank you for your service and your commitment to the city of Norwalk,” Greg Burnett (D-At Large) said.

“One of the comments he made is they … were always wondering why he was always out. It was helping people,” Young said. “ And I will say that the comment was that the day of the (funeral) service it all made sense. … they saw the love and all the people that came out to show their respect to Cesar.”

Israel Navarro made the request to rename the street.

“I am happy to finally see that street name change in honor to Cesar is happening. It is long over due,” Navarro wrote Wednesday.

Rilling promised a ceremony when possible.

His personality has been called abrasive by some but Henry Dachowitz has been a major positive for Norwalk taxpayers. Keep up the good work. I’m still waiting to by my Henry Dachowitz T-Shirt when they become available.
Today’s Great Amercan Hero was passed along to me by my daughter. Today’s hero is also spinning in his grave. I hope he once again finds some peace in eternity. Adolph Ochs saved the NY Times from oblivion in the early 1900s. He fought anti-semitism. His vision for the Times was to be fair in its presentation, moderate in its editorials and fully cover foriegn affairs. In a nutshell, objective journalism. What the heck happened to that successful formula?
Mini shout out to Nancy for providing Norwalkers with quality stuff..And to Adolph, may the Grey Lady dance again soon!!

Refunding bond issuance due to fluctuation in rates or tax code changes isn’t a stroke of genius, rather this is a specific job duty of the City’s Finance Director. Glad to see he is done counting erasers and pencils in the school boards budget, something that is not his job.

BTW, Jim Himes voted against this change to the tax code for anyone who cares.

Thank you, Mr. Dachowitz, for your diligence in seeking the best financial outcome for our city.

How’s tax revenue collection going? What percent of non-escrow based accounts have paid so far? What’s the current collection total relative to last year as of now? And are we still spending 5% more than last year as budgeted? Why didn’t we furlough some workers who would have been paid more on the insurance fund (since they weren’t working) instead of our nickel. What a colossal waste and abuse of taxpayer funds. Looking forward to the future financials so we can see how badly this was mangled and never let it happen again.