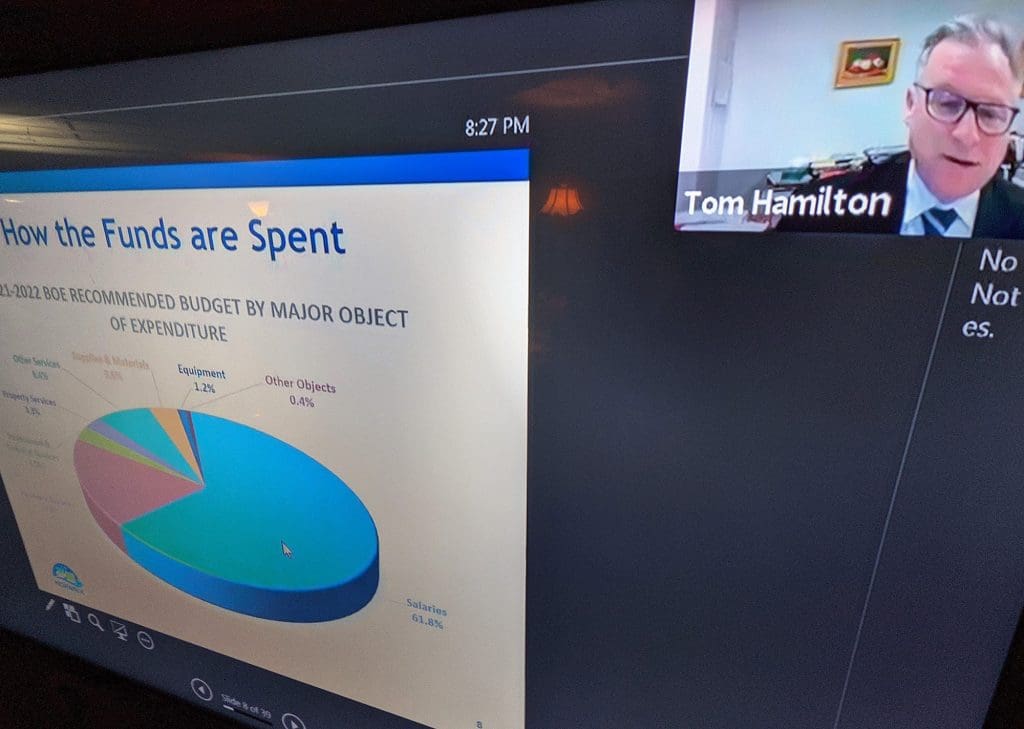 Two of five Council members present for the annual joint meeting of the Council and Board of Education Finance Committee indicated it might be a tough sell.

“We have a concern about where this mill rate ends up having to go based on current projections, and then based on what we all have to think about, the what-for and the wherefores of what may happen too,” Council member David Heuvelman (D-District A) said. “It’s a concern, because we also have a community that’s that has taken a hit financially and is suffering in some way, parts of our community. And if we have to raise taxes in order to do this, to a point that is unsustainable, that’s a problem.”

Norwalk Superintendent of Schools Alexandra Estrella’s recommended operating budget comes with a $220 million ask, compared to $208.3 million in funding for 2020-21. Estrella characterized this as “a flat budget,” given that only .5 percent of the increase comes from NPS initiatives. The rest is attributed to rising health insurance costs, contractual wage increases and the exhaustion last year of what was left of the insurance fund.

NPS didn’t need the money it had in its insurance fund because it switched to a State health insurance plan in 2017, and every year since then the money in the fund has been applied to the schools’ operating budget.

Board of Education member Barbara Meyer-Mitchell reminded Council members that NPS Chief Financial Officer Thomas Hamilton warned them every year that the insurance fund couldn’t be used up all at once because the following year, the shock to the taxpayers would be greater. While that was wise, the Board of Education could not have anticipated this year’s large increase to health benefit costs, Meyer-Mitchell said.

The hike comes because the State caught on, realizing that a state-wide rate was not appropriate. Fairfield County has the highest costs and the new county-based rate reflects that.

NPS plans to shift $2.5 million already in its budget to fund an additional 16 dedicated literacy specialists at the elementary and middle schools and provide math specialists at all 12 elementary schools, as part of its plans to mitigate the effects of the pandemic.

Council Finance Committee members questioned NPS leaders about the need for math and literacy specialists and about pandemic issues.

“It’s really an investment in our future,” Meyer-Mitchell said. “Because if we don’t catch (the children) up now, we’re gonna pay for it later, in interventions, in dropouts, in people who then are not well employed and not paying their taxes, and not able to stay in Norwalk.”

“When we look at the data across the nation, the school to prison pipeline, is calculated and determined by reading scores in third grade,” Estrella said. “So is crucial for us to make sure that we have structures in place coming in the next academic school year, that ensure that our children are getting the interventions that they need to develop their reading capacity at a level that catches them up to be successful in school.”

“We know that COVID learning in the past year has had some catastrophic effects on many students,” Board of Education Chairman Colin Hosten said. “And the worst part is that I think we don’t yet know what we don’t know about the long-term impact of some of this.”

Heuvelman asked if there’s a contingency for Possible COVID-19 costs should the situation continue into September.

“If we find ourselves in a situation where we’re still dealing with substantial pandemic related expenses, that there is certainly the possibility that there would be additional funding coming from the state or federal governments,” Hamilton said.

Meyer-Mitchell thanked Heuvelman for the comments about the mill rate.

“What is comforting to me, is how well the people in this ‘virtual room’ handled one of the biggest crisis that our country has ever faced last year,” she said. “And I’m confident that we can find our way through it with good communication and good thinking and good teamwork and, you know, turning over every rock for every possible funding source.”

Common Council member John Kydes (D-District C), a veteran of many budget cycles, commented, “This year, I’m taking a different approach to the budget. And that’s and that’s basing my decision solely on … the tax impact on residents, just the way to simplify it for myself,”

Kydes has expressed an interest in running for Mayor, forming an exploratory committee last month.

Mayor Harry Rilling, for his part, made much the same speech he’s made over the course of his seven years in office.

“We’re all looking forward to a cohesive, open, transparent and amicable budget season, so that we can craft a budget that provides for our children, an education to which they’re entitled, to give the teachers and the staff the resources that they need,” Rilling said. “And also keeping in mind the situation regarding the taxpayers and understanding that taxes have a limit, we cannot continually raise taxes and not have a good reason to do so. So, we want to keep taxes low. But we also want to keep the education system growing and developing like it has over the past few years.”

Norwalk Board of Education member Diana Carpio said Estrella has used her connections to bring in grant money in her six months as Norwalk super.

“If you think about it, our expenses could have been way off the charts, between PPE, the changing of the classrooms, hand washing stations, everything that we’ve had to put into the schools … It’s been an unbelievable year,” Carpio said. “And yes, numbers are high. However, they’ve done incredible job trying to keep everything level. And we have to think about the children and their future. They are our future.”

A few thoughts for today:
1) John Kydes has a “Come to Jesus” moment! Concern for Tax impact for residents? What a novel approach to governing! If running for Mayor opens one’s eyes to that fact, I say better late than never. In fact, I hope everyone on the Common Council decides to run for Mayor. Maybe they too will have that “Come to Jesus” moment..
2) While I’m happy to read Diana Carpio’s praise of Estrella’s bringing home the bacon, can we see specifics?
3) Regarding Insurance scam: If anyone has paid attention to Hospital Tax scam of prior years we should be thankful the pain of this misguided plan is not worse. Funny, Bob Duff and Co. forgot to mention this to us in the last election cycle. Thanks Bob. Why do I sense Norwalk High School project won’t be the gift we think it is..?? If Tom Hamilton mentioned this to other on Board I’d like to know Who and When? Was it before last budget cycle? Who knew what when? Maybe NON can dig a little deeper…
4) Wednesday Biden becomes President — I look forward to him waving his magic wand and life will be rosy again. (At least that’s what his supporters have promised, and I appreciate that)_

“We have a concern about where this mill rate ends up having to go based on current projections”….

When we have bogus real estate valuations, concerning yourself about a resulting mill rate that will be bogus isn’t going to move the needle. The only real number is the budget. Stop playing games with the mill rate. That’s not the driving force, it’s the afterthought.

This never-ending saga of budget shortfalls will only end when the city gets equity in funding from Hartford.

Recall in 2017, had we not adopted the 2.0 insurance plan we would have to let go around 40 people. We were under no false pretense that it wouldn’t be a problem for years to come.

What was a gut punch and now a head blow is that it only took Hartford 1 year to pull the rug out from under us again and hit us with a Fairfield County premium to keep the rest of the state basically flat. Once again Norwalk gets screwed.

The Board needs to cut down the astronomical salaries of the administrators and Central Office personnel and start compensating the Teachers for all of the 11-12 hour work days they are doing each day and every week during the pandemic. People have no idea what the teachers are going through. This is why many Teachers are opting to resign and leave Public Education in Norwalk and elsewhere. It’s high time the tax payers of Norwalk see more transparency of where the money is being spent in Norwalk. Also where is the money going that is being offered by companies to schools for taking on their new Math, Science and Literacy programs each year. Norwalk Tax payers should know what is really going on.

Things that make you go Hmmm…

“Common Council member John Kydes (D-District C), a veteran of many budget cycles, commented, ‘This year, I’m taking a different approach to the budget. And that’s and that’s basing my decision solely on… the tax impact on residents, just the way to simplify it for myself.’”