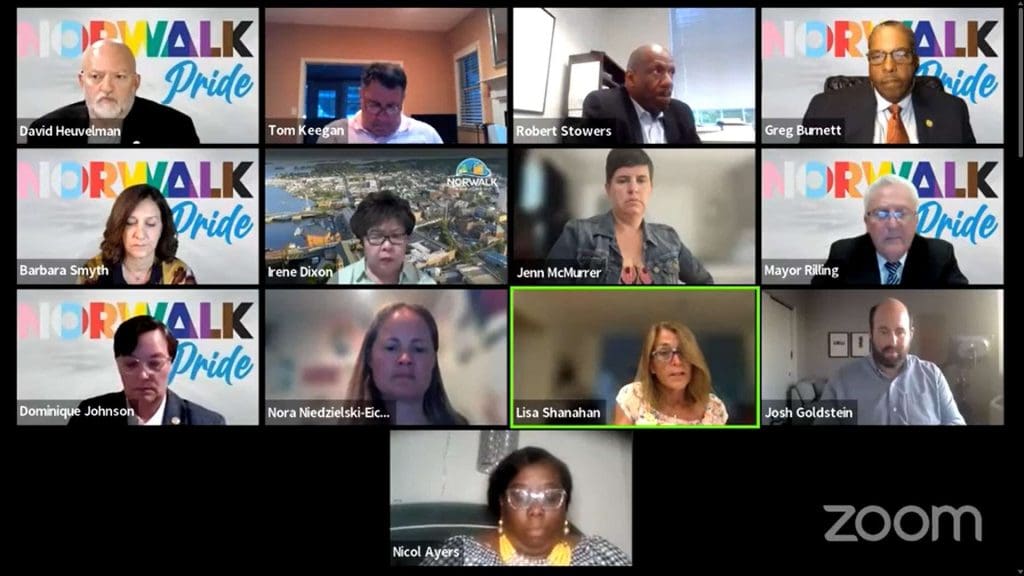 NORWALK, Conn. — Norwalk has banned pesticides on public properties, with certain exceptions, as of Jan. 1.

“We hope that the practices adopted by the city … will inspire our residents to stop the use of pesticides on their own private properties and to maintain their lawns and gardens more sustainable ways that minimize the harm to creatures that live in our yards and our beloved Sound,” Ordinance Committee Chairwoman Lisa Shanahan (D-District E) said Tuesday, before the Common Council voted unanimously to approve a new ordinance titled, “Healthy Outdoor Public Spaces.”

The ordinance formalizes and makes permanent a policy already being implemented by the Department of Public Works, Shanahan said in March when the Committee began work on it, partially to raise public awareness.

Shanahan on Tuesday encouraged residents to watch that March meeting, where Drew Toher of Beyond Pesticides , Sarah Evans of the Icahn School of Medicine at Mount Sinai and Dick Harris of Harbor Watch presented information on pesticides.

Studies show “we all have greater than 200 chemicals in our bodies, over 40 of those are pesticides,” Evans said.

The umbrella term “pesticides” includes “insecticides, herbicides, fungicides, rodenticides, all the other biocides out there intended to mitigate, kill or repel a pest or weed,” Toher said.

Endocrine disruption, a pesticide tactic of mimicking hormones, is “not evaluated despite a 1996 law requiring EPA review” and EPA “will allow a pesticide onto market without required studies on certain health endpoints,” Toher said. While “the agency assumes that chemical will not cause harm while it waits for that data,” many times “serious environmental problems” have resulted.

Toher said a study showed a group of Connecticut residents suffered the same number of ticks on their bodies whether or not a pesticide was used. Pesticide application “isn’t necessarily going to get the ticks that are going to fall on you.”

Council member Nora Niedzielski-Eichner (D-At Large) noted Tuesday that the “quite comprehensive” presentation that kicked off the ordinance work had “changed my views about how our family does pest control.”

While the ordinance prohibits anything containing glyphosate, neonicotinoids or chlorpyrifos, an exception is made for fighting poison ivy as this is a problem on school properties. Any product that isn’t organic is “restricted.”

The Oak Hills Park Authority agreed to the prohibitions, according to Shanahan.

“Pregnant women, children, and pets are particularly vulnerable to the adverse health effects of pesticides, including cancer, respiratory, endocrinological, and neurodevelopmental disorders.  Existing federal and state regulation of pesticides does not and cannot guarantee their safety.  Fortunately, there are numerous effective and safe alternative solutions, as well as best property practices, that can be employed for sustainable lawn, soil, land, garden, and tree care.”

Restricted products will be banned within 200 feet of a tidal wetland, watercourse or wetland, and on school properties unless the school’s principal ask that they be used, and an interdepartmental pest management team (IPMT) will govern the City’s pesticide application, reviewing applications for permission to use restricted products under certain conditions, such as when there’s an imminent threat to human health, the environment of public welfare and safety. The team includes the Recreation and Parks Director, who will chair the team, the Health Director, the Chief of Operations and the senior operations officer.

Council member David Heuvelman (D-District A) called the ordinance “a first big step for the city.”

“I personally think this is one of the most important things that we as a community can do, especially a community geographically located where we are. The water is important, we need to preserve it, we need to make sure that we are shepherding our water supplies,” Heuvelman said.

“I really hope that for everyone in the city, this provides a model for a chance to see how the city is managing it on its own property, the ways that can be done. And the real risks that a lot of these chemicals pose, you know, to your children and to our water,” Niedzielski-Eichner said.

The ban “follows years of advocacy by local groups such as Pesticide Free Rowayton,” a news release from Friends of Animals said.

“Of 30 commonly used lawn pesticides, all 30 are toxic to fish and aquatic organisms, 26 are deadly to bees, 22 are toxic to birds, and 14 kill bees,” it states. “…A wide range of effective organic solutions and practices to control pests such as ticks and mosquitoes or plants like poison ivy may be found at beyondpesticides.org.”

“Safer, organic alternatives may take more effort initially, or may be a little more expensive, but these considerations will be outweighed by knowing the city will no longer be posing a health risk to people, pets or pollinators or all the wildlife uniquely vulnerable to pesticide exposure,” said Priscilla Feral, president of the Darien-based Friends of Animals, in the release.

Efforts continue to enact a statewide ban on toxic pesticides, it said.

Feral said, “It’s high time that we connected people and conscientious lawmakers—linking municipal pesticide bans to the interests of animal advocates, gardeners and conservationists, so that the hazards and risks of using pesticides both informs residents and changes public policies and practices.”

Thanks for forcing those of us who want nothing to do with either to live under your vision for an ‘improved quality of life’.

Pesticides used on lawns have long been known to have quite harmful effects on humans. Especially children. The obvious question is why the Council didn’t ban or limit the use of pesticides on private properties that account for the lion’s share of lawns in the City. Not important ?

In this holiest of Pride months, before the holiday celebrating our nation’s birth, as tens of thousands of Norwalkers struggle with COVID, rising rents due to excessive zoning regulation and its downstream effects like gentrification; inflation, climate change, gun violence, and the evils of polarization and local corruption under the stranglehold of our national partisan duopoly…

… I’m SOOO unbelievably glad that OUR Council rose to the urgent task of protecting us from DANGEROUS KEMMIKULZ which we’re not even sure anyone uses in harmful quantities around here.

PS. If you’ve ever heard the phrase “f***ing the dog”, although it’s expanded and morphed into more generic popular phrases like “screwing the pooch”, it originally referred to when politicians and bureaucrats ignore pressing issues and waste time on pointless hobby horses. THIS IS WHAT IT LOOKS LIKE.

Piberman, a word to the wise:

Common Council couldn’t do what you’re asking because of the state preemption law, which currently prohibits local governments from imposing pesticide restrictions on private property. Kudos to Norwalk’s Common Council for the ordinance they embraced and passed.

An education program for residents follows.

Asking for a friend – but are Norwalk’s residents & taxpayers doomed to receive their city representation by Brady-Bunch zoom in perpetuity?

Explain please. Why can these same members meet in mass on the Town Green for protests? They share a microphone. Why can they meet in various groups in front of various building – always with podium – for proclamations and ribbon cuttings? Why can they go to grocery stores, restaurants, clubs, churches, movie theaters, etc. Why can they entertain special interests at their various clubs, homes, even on boats – BUT – they can’t collectively meet in the CC chambers?

What justification remains for locking out the public?

Is this just simply – Harry’s old and afraid?

When will the public make it “uncomfortable” for this to continue?

the problem is that anyone can go buy pesticides, herbicides, insecticides at home depot and apply them on their property with no restrictions. Thats problem number 1. Number 2 is that all these fly by night applicators who arent state licensed and insured are applying chemicals for hire and dont know what they are doing. The state has literally 2 or 3 people to enforce this for the whole state. I have a license after going through a rigorous training and exam with the state DEEP. I must keep my license up to date by ateending seminaars as well. When a lawn is properly maintained it doesnt need much in the way of chemicals. Foolish to ban the use of round up on public properties. The alternative you now mandate the DPW use does not work. Get used to weeds growing through the cracks and unsightly areas around the schools. But then again the council thought it was ok to let the grass grow 2 feet high at the Norwalk Public Library. All the surrounding towns use pesticides under strict guidance and look wonderful. But i guess the tree huggers win again under one party rule.

Every field in this town is in absolutely pathetic shape. Has been for years because the city doesn’t maintain them. They just mow the grass in the summer which isn’t maintaining the fields. Instead of aerating, seeding, etc, they choose to do nothing.

My kids play T Ball. Its nothing short of astonishing how poorly the fields are kept. Worst part is that its not even that expensive to do so since you would use the same DPW unionized crew that is already on a bloated salary. Harry and the council would rather spend money on raising Estrella’s pay and hiring more staff at city hall.

This town needs to wake up because the way city hall and the council spend money is pathetic. Residents should demand more.

Oh, and if the fields were properly maintained you wouldn’t need pesticides on them. Instead they want to build turf fields which have known environmental consequences because they dont have to maintain them!