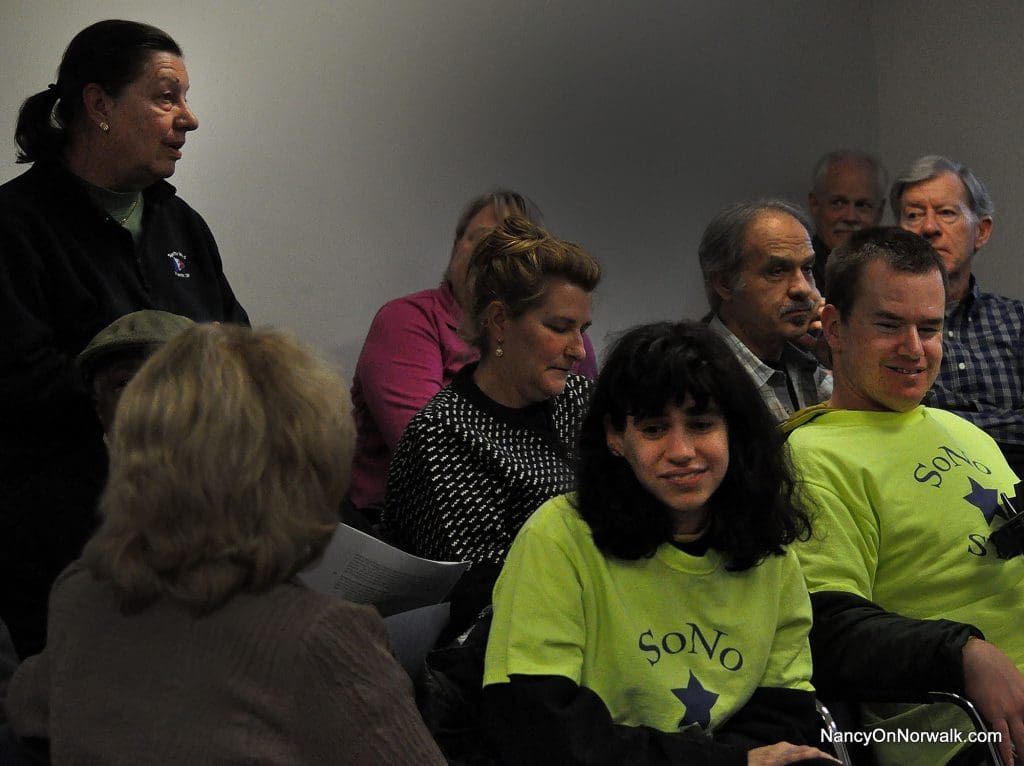 NORWALK, Conn. — It’s time for the city to fund the SoNo Stars program, Councilman Bruce Kimmel (D-At Large) said Monday, after a series of parents pleaded on behalf of their grown children, who by all accounts love cleaning up South Norwalk streets.

The Common Council, pressured by a cut in U.S. Housing and Urban Development (HUD) Community Block Development Grant (CDBG) funding, is planning to issue “zero dollars” for the SoNo Stars, described as the only city program to clean up SoNo, and two other Norwalk programs. That doesn’t mean they won’t get funded, Kimmel said.

“We think your program is so important that the funding should be built into the city budget and not be dependent on how much HUD gives us every year,” Kimmel said to the SoNo Stars and their supporters. “We haven’t made a final determination.”

“This is never easy and gets worse every year, especially this year, more than ever,” Planning Committee Chairman Doug Hempstead (R-At Large) said, explaining that HUD has shifted the way the money can be spent.

The $25,000 requested to support the SoNo Stars, a group of developmentally disabled clients of Star Inc. who get paid minimum wage to clean up SoNo, pays for supplies for litter cleanup and graffiti abatement, Norwalk Neighborhood Coordinator David Shockley. It also pays the salary of a coordinator.

“Thomas Hamilton, our finance director, has given no indication that he will fund it or find the means to fund it,” Shockley said. “The choice not to recommend any money to the neighborhood improvement coordinator does knock them out. It’s kind of a tough battle.”

“The city doesn’t have any funding or any removal program,” Delgreco said. “The inner city areas will be most affected. This problem is not going away, it will just get worse especially if no one is making an effort. So if we don’t get any money… we’re pretty much out of business. So that means no more cleanup, no more litter removal. What the kids are doing is great, but it’s also going to affect the whole city.”

The SoNo Stars sat in the front row but did not speak. Claudette Nash said her son, Justin, gets a lot of attention when he is out cleaning the streets as passersby beep their horns at him. If they are driving through SoNo on a Saturday, he will point out a soda can and say he’s got to pick it up on the next work day.

“It’s something that has a lot of meaning in his life,” she said.

Bruno Tomasi spoke of his son, Dean. During the winter, “There isn’t a day, not a day that goes by that he doesn’t call me and say, ‘Dad is it spring yet? When is spring coming so I can put my T-shirt on and go (out and clean the streets)’  … He takes so much pride. Between that and pizza with the mayor, he is the happiest camper in the world. Trust me, there is nothing that makes him happier. If you could do anything at all to keep this going it would be wonderful because without it he doesn’t have anything to look forward to and that’s a reality, it’s the truth.”

“No easy decision here,” Hempstead said. “It’s not whether we’re for or against the program.”

“I think I speak for the rest of the Council when I say, we very much are aware of the importance of the SoNo Stars program and the community neighborhood program,” Kimmel said.

Hamilton isn’t calling the shots; Mayor Harry Rilling, the Council and the Board of Estimate and Taxation are, Kimmel said.

“If they want to shut down a program that costs the city $20,000, because we would like to spread this little amount of money as widely as possible, shame on the city,” Kimmel said.

“I support funding for SoNo Stars, no matter how we have to do it,” Mayor Harry Rilling said Wednesday.

Also not recommended for funding are the Mayor’s Summer Youth Employment Program and the city’s Aggression Replacement Training for Youth at Risk program, which are seeking $20,000 and $24,000 respectively.

“We firmly believe that the city should be funding these directly out of its budget and not through grants,” Kimmel said. “I don’t think the intent of HUD is to supplement the city’s budget. One way or the other it will be funded, we can pretty much guarantee that.”

Sorry, NoN, I’m having trouble understanding Mr. Kimmel’s quote in the last paragraph. What is “It” (will be funded)? The Sono Stars program, or all three programs including the two mentioned in the previous paragraph? Maybe I need another cup of coffee.

$25K to support jobs for these special needs people doesn’t sound like much when the same meeting was urged to spend over $200K to upgrade the City Hall community room to satisfy what has been called a special request.

I am sure the public union employees making $150,000 without college degrees can see the need to give up a little of their cash to help these disabled Americans? I’m not holding my breath.

Give the city money to these kids, not more welfare programs and free housing for people who need to learn to live on their own two feet.

Why not make this a “special request”….