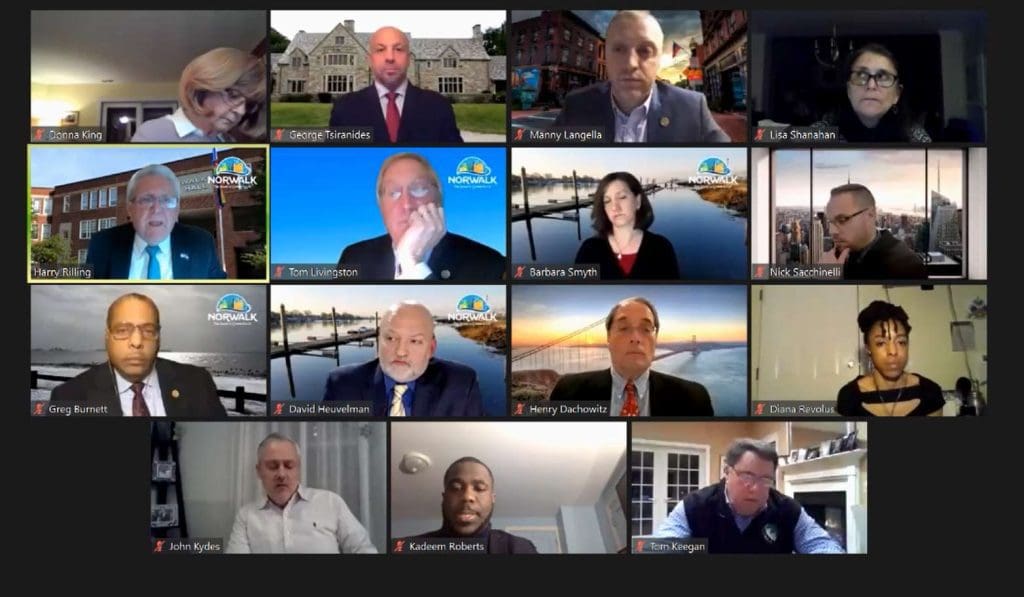 NORWALK, Conn. — Cries of “painful cuts” for Norwalk’s school system are sure to intensify with Tuesday’s Common Council decision: members voted 10-5 to set a budget cap that is $1 million lower than the controversial recommendation made by the City’s finance chief.

“I think I speak for more than a few of us when I say that this was by far one of the most challenging budgets that we had to face in recent years, if not ever. We had to weigh the normal issues of the city that we were very familiar with but also account for many of the unknowns driven by COVID,” Council President Nick Sacchinelli (D-At Large) said.

“I know we say that every year, how difficult this is. This one that seems worse than then we’ve had in the past,” Council member Tom Livingston (D-District E) said. He, like others, mentioned “federal stimulus funds” and said, “Let’s see what they get. And if they don’t get enough, have them come back.”

Norwalk Chief Financial Officer Henry Dachowitz’s recommendation of a $400.6 million operating budget for 2021-22, which calculates a 6% increase for the City and a 2% increase for the Board of Education, prompted promises from the BoE of “cuts,” given their request for a 4.6% increase.

That was characterized by the Board as “pretty flat,” given that it’s mostly said to cover increased health insurance costs and contractual pay increases. NPS plans to save $945,082 by cutting eight positions and plans to “reduce budget for 10-month employees to reflect actual work year,” a “cut” of $545,662. Norwalk Superintendent of Schools Alexandra Estrella plans to cut two “chiefs” from the Central Office staff, as well as a lower-level administrator. Magnet school funding would be cut $1.5 million.

Tuesday’s meeting began with seven parents of school-aged children pleading for funding and three others asking for a lower cap, one of them a parent of school-aged children. Barbara Meyer-Mitchell was the only Board of Education member to speak, as has been the recent pattern. “I’d like you to consider making a more equitable allocation of the capital of the operating resources between the Board of Education and City partners,” she said.

Estrella is “literally is doing everything that she can to save money, she is not trying to waste money, she has already brought in over $2 million of grants,” said Heidi Alterman, one of the moms. “…Please do not continue to repeat the cycle of just not trusting. We literally put our trust in all of these teachers and the Board of Education members to get us through this pandemic. And they did it. And they did it in an amazing manner.”

Sarah McIntee, another mom, said she remembers “sitting in this room last year when we were all there in person. And this Council, with many of the same members sitting on it, saying they looked forward to forging a relationship with the new superintendent and supporting her in this year’s budget. And yet here we are in another budget year, and only a 2 percent increase for the schools compared to a completely inequitable 6 percent increase for the city. I’m curious if the Council’s put any thought into where this $5 million shortfall will come from.”

On the other end of the spectrum, Jessica Kordas, mother to two children, called the BoE request “disingenuous considering that last year, the budget was increased by more than $9 million.” She said, “I think the Board of Ed needs to be held accountable for their spending. And I think we need to find efficiencies to benefit our children, not just increase taxpayer dollars to fund the education of our children in Norwalk.”

There were many references to the upcoming efficiency audit Dachowitz has been promoting.

While Council Finance Committee Chairman Greg Burnett (D-At Large) said he supported sending Dachowitz’ recommendation to the Board of Estimate and Taxation for further deliberation, he also said, “We need long term solutions that will reduce taxes.”

Kydes suggested a total budget of $399,557,112, meaning a $383,634,246 appropriations cap. Livingston said he didn’t think that was what had been discussed in caucus and asked where Kydes got that figure; Kydes said he “based on the tax increase to my district, and what I felt they could digest and be able to afford. It’s a $1 million reduction from the original proposed cap.”

The ensuing vote was:

“I’ve been really conflicted about this operating budget recommendation, not really for just for the schools, but for the city,” said Smyth, a former Norwalk High School teacher. While “we funded the Board of Ed at a much higher rate over the last seven years than the city and so the city side has been hurting and we really need to make that up,” just to meet contractual obligations would take a 2.7% increase for education, she explained.

“And I look at what our teachers and our kids and our staff have gone through this year. I mean, it’s history, our kids are writing history right now, they have been through hell. COVID is not done with us,” she said, adding that a 2% increase “feels to me punitive to a new superintendent.”

“It punishes a new administration for the Board of Ed and our schools, before they even really get their feet underneath them,” Heuvelman said. He spoke of “a dirty little word that we don’t seem to like to use, which is ‘compromise’” and said he would have proposed an total spending increase to $401,641,271. That would cost First Taxing District taxpayers $17 a year, “a small price to pay, in my opinion” to help NPS cover its contractual increases.

Burnett said cutting another $1 million would be “catastrophic,” and Dachowitz did a “great job” in making the recommendation.

NPS typically has a budget surplus of $2 million to $4 million, Livingston said.

Keegan said he’s looking forward to the efficiency study and “I am proudly wearing my Norwalk band vest, I still have a child in the Norwalk public school system.”

Langella, making reference to a parent’s comment, said, “I’m not discounting the ROI (return on investment) of a proper education or the efforts put forth by both the City-side and the BoE,” but, “I don’t think we’re out of the economic tailwinds of COVID-19” and “we cannot ignore the undue burden of a large tax increase that this will put on the residents.”

“We do have the ability to consider needs later in the year where we can do a special appropriation if we really are concerned that the Board of Ed is not getting what it needs,” she said. “But we don’t really have clear visibility as to what the Board of Ed really does need when the kids do come back from the classroom. And I think we should keep our powder dry.”

Sacchinelli said, “I think someone who spoke prior to me said that we’re aware that people are losing their jobs and losing their homes. So what good is a great education if their parents are on the street?”

“I think everyone has pretty much articulated my thoughts and feelings on this matter. And we just have to be good stewards of our budget for the city. And that’s what we’re trying to do,” Young said.

In closing, Mayor Harry Rilling mentioned the minimum budget requirement, a State law that prevents the City from cutting the school budget. Once it goes up, that sets a new bar.

The Council members’ commentary “clearly sends a signal to the residents of Norwalk that we are being good custodians of their tax dollars and trying to do the best that we possibly can,” Rilling said. “We are, and I will say this cautiously, we are very hopeful that the money coming from the federal government will help to supplement some of the money for education. Just today, there was a release that $150 billion was being put aside for education, and one of the uses for that money that would be authorized to avoid layoffs. So we are hopeful as we move forward, that the some of the money that will be allocated to the city of Norwalk Board of Education will help to bring them back to what they need in order to provide the education that we know that our young people are getting and the education that we all support.”

Once again Mr. Sacchinelli’s statements show his complete failure to understand just how much our most at need populations rely on the public education system for the very services they provide. Statements like this : Sacchinelli said, “I think someone who spoke prior to me said that we’re aware that people are losing their jobs and losing their homes. So what good is a great education if their parents are on the street?” , also fail to take into account how many families need school and rely on school law and their programs to allow them to work. Without school, the sad reality is that childcare is not affordable and it forces one parent to be home with their children losing income. A loss that is disproportionately shouldered by women.

On a slightly different subject, please read the attached article.

I demand Chris Perone (who’s on Energy Committee) Bob Duff and our other state legislators respond to this!! How much of our bills already go to supporting those who can’t pay their bills! This is another tax on us — AND most of us don’t even know it !!