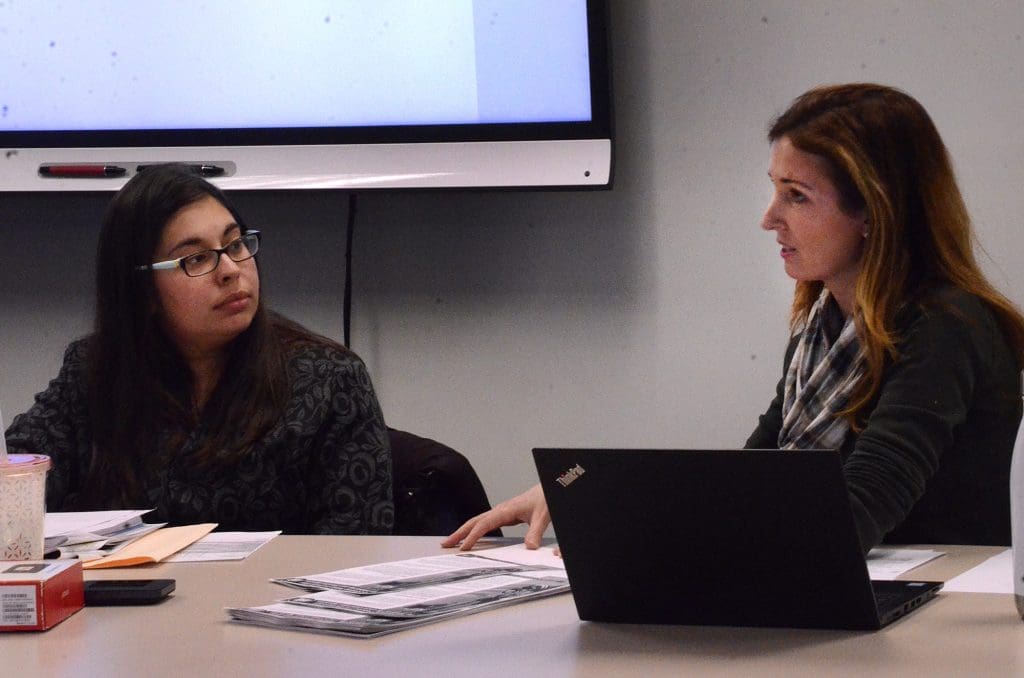 From left, Norwalk Director of Health Deanne D’Amore listens to Board of Education member Erica DePalma, Thursday in City Hall, during the Common Council Health and Public Safety Committee meeting.

NORWALK, Conn. — It’s one of parents’ biggest fears and children’s biggest problems. And now that it’s reached epidemic proportions, Norwalk’s elected officials are working together to create “groundbreaking” policy to protect the 3,950 local students at risk of being bullied by their peers.

While the Board of Education does its best to address bullying, Sacchinelli said, “from an enforcement standpoint…there’s very limited things we can do to enforce something that didn’t lead to an incident. So what I mean by that is, we can’t do anything until something bad has happened, right?”

Committee members agreed on the need for a more proactive, preventive approach. With the help of, among others, freshman Councilwoman Dominique Johnson (D-At Large), author of a dissertation on the subject, they are looking to create new law.

Board of Education member Erica DePalma, who attended the meeting as a guest, said the Board is rewriting its policy, and quoted statistics from No Bully, an anti-bullying organization. “One in three students are bullied in some form by their peers…In Norwalk that equates to more than 3,950 of our students that will be victim to bullying. It causes lasting physical and mental harm.”

DePalma, whose advertising agency vetted No Bully, said it uses evidence-based solutions to help schools write policy, proclamations and intervention protocols, using an “urban-focused” approach that includes webinars busy parents can access on their own.

“This program has been able to quantify that they had a 90 percent success rate in eradicating bullying when programs (were) implemented with fidelity in schools.”

DePalma said the BOE hopes to tap into a grant to fund a pilot program for a yet-to-be-determined number of schools.

Sacchinelli said the Council is looking to develop “an overarching policy over anybody who has custodial responsibility over a minor,” including Norwalk Public Schools, parent, or guardian.

“There is a new state law in Connecticut regarding bullying to include only one incident,” De Palma said. “And that is largely based on cyber bullying and the fact that one single post can live on in the form of, you know, a viral share.”

She said that as a first step, No Bully recommends training rather than fining parents, a protocol supported by the Centers for Disease Control.

Council member Thomas Keegan (R-District D), a strong advocate for taking action, said NPS employees need to be trained to recognize when a child is suffering. “…We have to define what is bullying.”

Johnson said the Council “is bound by Connecticut State law as to what bullying is.”

“We’re really going to have to draw on a lot of the evidence base and the research knowing that oftentimes, it’s very difficult to prove any sort of causality. But we know that social emotional learning creates environments where bullying is less, we know that a school climate that’s positive has less bullying.”

The BOE is working on social emotional learning, according to DePalma, who described it as “teaching children empathy, teaching them how to regulate their emotions, be culturally aware. This is where we get to a point where they are regulating themselves…”

Sacchinelli said a policy that addresses bullying beyond “brick and mortar” would be “groundbreaking” for Norwalk. “…The awareness within the buildings is a big deal. But the bullying follows these kids home now, which is something that the schools can’t protect them against. So we’re hoping to put together something that’s enforceable that we can help protect these kids. And again it’s through awareness.”

Sacchinelli said the Health and Public Safety Committee is looking to narrow down the broad-based concern about bullying before handing the topic off to the Ordinance Committee to develop a new law to support the BOE and “create policy that is meaningful and enforceable.”

Great partnership between the Common Council and the Board of Education. There need to be both proactive and reactive solutions put in place. The Norwalk Public Schools is implementing Social Emotional Learning to create a positive school climate proactively. We are overhauling our counseling program to make sure students have the proactive support they need. And we are training staff in restorative justice practice, to help students learn to take responsibility for the impact of their actions on others and to make amends in a meaningful way that allows them to be a healthy part of the school community. Thanks, Nick and Tom for your support on this important issue. We hope the Common Council decides to fund these important initiatives for the 2020-21 school year.

Cyber-Bullying is pretty tough on a child. I really don’t know the answer to the issue. A big part of the problem lies in parental failure. Schools can only do so much. That being said, the number of 3,950 potential bullied kids is absurd. My concern is the schools overstepping on this issue. Good luck threading the needle. If adult involvement in youth athletics is any barometer for adult control over bullying, God help us.

IF this takes money away from ELL support, we should have state fund anti bullying campaign.

I forgot to mention that the Board of Education also began implementation this year of a digital learning and citizenship curriculum this year, which we hope will also prepare our students for the 21st century digital world and to be responsible digital citizens.

Thank you for reporting on this. I have three kids in the schools, and I do worry about this. I find this article encouraging. It looks like we have some good minds and new energy on the issue.

How do you tackle bullying but support restorative justice at the same time? Is lack of discipline contributing to hostile classrooms and actually encouraging bullying? You might want to ask some of our teachers. I only have it anecdotally, but this year seems to be untenable for many.