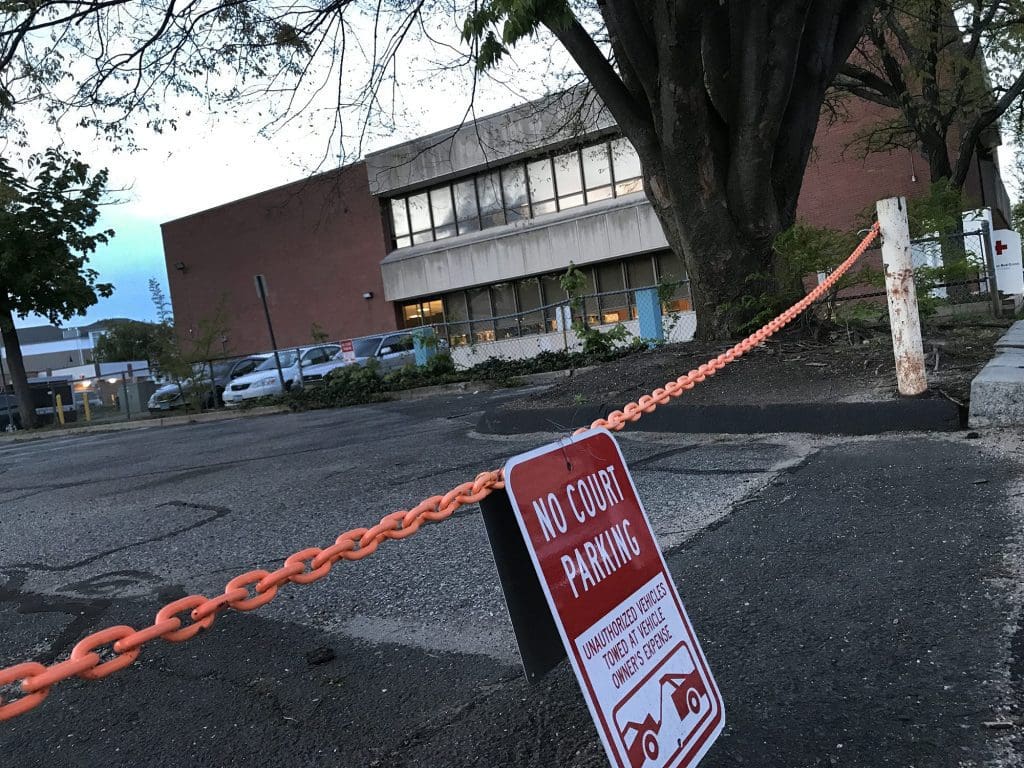 Parking has not been allowed at 11 Belden Ave., the lot next to the Norwalk Public Library, for more than a year.

NORWALK, Conn. – A tentative deal has been made to resolve the tensions between Norwalk Public Library supporters and a developer who has a plan to build apartments next door, on a lot formerly used for parking.

The Common Council on Tuesday is scheduled to secretly discuss “negotiations pertaining to the proposed option to purchase agreement by and between” Norwalk, the Norwalk Public Library Board and developer Jason Milligan, who won Zoning approval a year ago to build his apartments but has since been stalled by an appeal filed by the Library Board.

That phrase in quotes is from the meeting’s agenda, which stipulates an executive session for the topic. Although this Council has not typically gone into executive sessions even when they are on the agenda, this time it’s for real, according to Mayor Harry Rilling.

“Right now, this is in negotiations and therefore, I am not able to disclose the details.  Ergo, the Executive Session,” Rilling said in a Monday email, after being asked for information about the terse agenda item.

Milligan was more forthcoming, hinting at a win-win solution to the controversy.

Milligan, under the entity 587 CT Ave. LLC, won Zoning approval in April, 2016, to build “The Lofts at Mott Avenue,”  a 5-story, 69-apartment building, at 11 Belden Ave., in spite of a public outcry, much of it centered on a need for library parking.

The Norwalk Public Library Foundation, Inc. is a federally certified non-profit organization that supports library functions through private voluntary donations, former Mayor Alex Knopp, Library Board chairman, said in January, offering a complicated explanation as to why it’s legal for “the library” to sue the Zoning Commission. (It’s not the library, but an interested party with a stake in the game, he said.)

There’s much legal language devoted to this in the briefs filed with the court, with the Board arguing that it provides programs for the library, programs which will suffer through a lack of parking in the area, and Milligan’s attorney’s arguing that, “Even if library parking difficulties exist, this harm is remote, indirect or derivative vis-à-vis” the Board as opposed to the library, with the Board not being the proper party to file the appeal.

The Board also challenges the Zoning Commission’s approval, saying that the application does not conform to Zoning regulations in various ways. Milligan’s attorneys reply that it does conform to the regulations, and if there were arguments that it didn’t then the Board should have made them at the Commission’s public hearing in January, 2016.

Knopp was appointed to the Board in March, 2016, and became the Board’s chairman in July.

Neighbors of the property, the owners of 15 Belden Ave., are also appealing the decision. The two cases have been combined by the court.

“I can tell you that smart people like former Mayor Knopp as library board Chairman, Mayor Rilling, and (Corporation Counsel) Mario Coppola are trying to find a solution to the library parking problems. I can also tell you that as we are and always have been open to a win/win solution that can allow for additional parking for the area and at the same time we can build affordable apartments in the downtown.”

Reached by phone, Milligan said that he believes there is a solution that gives the library what it wants and allows him to build his apartments, which he has planned to be “affordable.”

“It requires some creative thinking,” Milligan said. “… There are very smart people that are trying to make this work.”

A good plan would allow for more parking in the area, but allow him to build the affordable apartments, he said, explaining, “We want a solution that is good for the area and good for the city.”

As a former Library Board member, I know that not all Board members are appointed by the Mayor. The taxing districts also appoint Board members from their districts, providing well rounded representation. The city should have bought the land decades ago, but the view from City Hall was short sited.

My personal dealings with Milligan tell me that he should not be trusted at his word. I don’t believe for one moment he is looking out for the town of Norwalk. He is about money and as long as he is paid handsomely, he won’t care what is done.

A fair price would be 30 spaces for $750,000. A 25 cent / hour parking zone on the already zoned city street parking spots would pay for this over a 20 year period. The merchants want paid parking and enforcement to encourage churn and traffic flow for their shops. The value to the library…..priceless.

My personal dealings with “concerned” tell me he/she is a coward.

As a business owner money is needed to pay bills and people’s salaries. It is possible to make money while at the same time both care about and help the city. It is also very possible to be completely benevolent and totally screw up the city.

A mixture of public/private perspectives and motivation can often produce excellent results.

Try not to be so cynical, and if you are going to disparage someone publicly be brave enough to show who you are.

If they buy the lot and use meters then I would suggest that they limit the time to 3 hours or less (before more coins have to be inserted) to make it less-likely that people visiting the Courthouse will use them.

As an “after the fact” observation, but a lesson for the future (if we ever do learn from experience), if our P&Z/Planning Commissions folks had paid any attention to the 2008 PODC which specifically called for provisions to provide expansion and parking for this library, this probably expensive win/win situation would never had happened.

If concern for the city were added to P&Z’s job descriptions (not currently stated), a joint library/city/owner solution would have been worked out years ago, long before any value was added to the property in question.

For years, residents who pay approximately 85% of the property taxes that fund our government, have asked for a City Planner, but to no avail. It’s been requested during every controversial development for the past 5 years and include too many to mention.

Isn’t it time to realize, that our convoluted City Charter and ordinances are full of appointed boards and commissions, agencies and politicians that are overly distributed, resulting in a decision making and approval process that has resulted in NOBODY actually being in charge of the planning and zoning of the City of Norwalk. The POCD Master Plan isn’t worth the paper it’s printed on.

The end result, lawyers out maneuvering the city, resulting in payouts for bad land use or hodge podge developments. Historically speaking, campaign donations provide a glimpse into the relationship between development and City Hall, but at the end of the day, nobody is in charge, with Norwalk for sale and it really doesn’t matter to ”whom or what for.’

On point commentary by Lisa