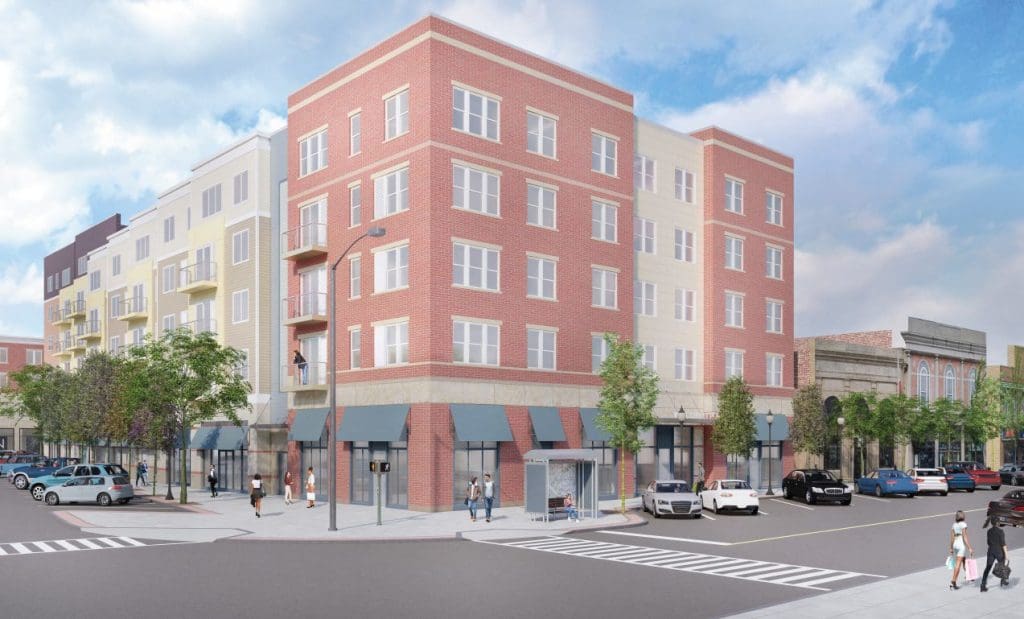 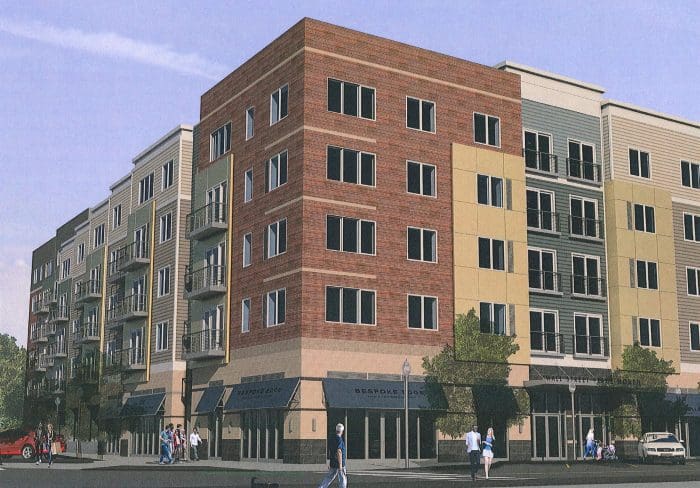 The 2019 rendering of the plan for Wall Street Place, referred to by many as “POKO.”

NORWALK, Conn. —It’s been almost a year and the revised plan for Wall Street Place, commonly called “POKO,” is ready for public consumption.

The plan includes an additional 50 apartments and an arts and cultural component, as well as a revamped architectural look. Those additional apartments would be rented at market rate prices, so the project is no longer 100 percent affordable housing.

You might know it as “the Tyvek temple:” Wall Street Place is the partially completed building at the corner of Wall and Isaac Streets, a project that has its roots in a 2004 redevelopment plan. Construction halted in June 2016 and there have been many legal hurdles since then. POKO Partners developed the original plans for a mixed-use development designed to restart the Wall Street area, but Citibank owns the property now, after taking it from POKO via a deed-in-lieu transfer.

JHM, Citibank’s preferred redeveloper, brought forward a new plan a year ago. It featured 101 apartments, as had the original plan, but also hinged on demolishing the Garden Cinemas to create a parking garage. That drew pushback and the Common Council tabled the proposal in July, to consider that issue and others. Mayor Harry Rilling predicted that it would come back in September.

The Cinemas have since closed; owner Richard Freedman said in an email to JHM that he would be selling the Cinemas “regardless” of JHM’s interest. In email to NancyOnNorwalk, Freedman blamed empty seats – economics, pure and simple – for the venerable theater’s demise. 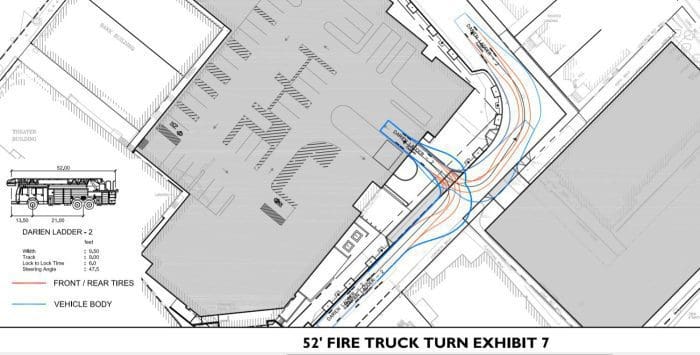 The revised plan for Wall Street Place includes a fire truck turnaround on Isaacs Street, needed because the road is effectively a dead end given that the former Leonard Street parking lot is owned by real estate broker Jason Milligan.

JHM needs additional parking to make the project legally viable; the Zoning Commission allowed POKO Partners to move some of its required parking off of Wall Street Place phase I onto an adjacent property that it owned, but that property is now owned by real estate broker Jason Milligan. JHM tried to buy it from Milligan but those talks fell through.

The plan presented by JHM on June 27, 2019, included a two-story parking garage where the Cinemas are. The plan JHM plans to present on Thursday includes a four-story building on that lot, with the bottom two stories providing 152 parking spaces and the upper two featuring 50 market-rate apartments, according to the narrative project proposal. Six of the new apartments would be studios, four would be two-bedroom and 40 would have one bedroom.

This makes it 151 apartments in a project that has been planned for 101 apartments, dating back to at least 2007.

One year ago, Citibank expected $25-30 million in 4 percent Low Income Housing Tax Credits to help fund the project through an equity investment by a limited partner. The new documents cite $7,950,000 in LIHTC equity.

The details about “affordable” matter here:

Federal law regarding LIHTC changed in 2018, providing different requirements per apartment size, meaning that four adults could rent an 80 percent AMI three-bedroom apartment in the development, with a maximum combined income of $114,720. Or it could be a couple with two children, the parents making a combined $114,720.

Citibank has been said to be losing $14 million of the $22 million it has spent so far on the project. “The proposal comes at great cost, and notably, little, if any, monetary recovery” for Citibank, the narrative states.

“We feel that there are several issues with this project,” Rilling said to NancyOnNorwalk in July, explaining why it had been tabled. “The issue that has come up more frequently than anything else is the Garden Cinema, or some sort of arts and cultural center focus on the project. We don’t disagree with that, we would love to see that happen.… And the other issue is the design, people are saying the design does not fit into this area.”

Marc Alan of Factory Underground and Wall Street Theater developer Frank Farricker had formed the Norwalk Film Center, Inc., a nonprofit, to create the non-profit community theater and film technology education center with hopes of raising $1.5 million and taking over the Cinemas or perhaps 7500 square feet in the development. It would be a potential future home to the Norwalk Arts Commission, Norwalk Film Festival, etc. 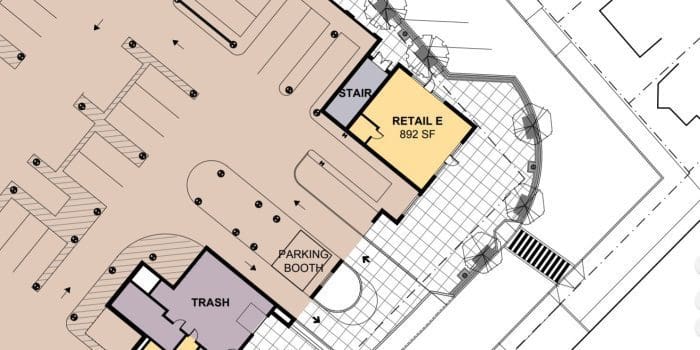 Retail space “E,” located across the street from where the Garden Cinemas is now, would be leased to the Norwalk Arts Commission under JHM’s updated plan for Wall Street Place.

The new proposal states that the Norwalk Arts Commission will rent a 900 square foot first floor retail space at 61 Wall St. for $1 a year, in a five-year lease, because JHM is “committed to assisting the City with its goal to make the Wall Street redevelopment area an art and cultural ‘hub’ of the City.”

JHM is also continuing its plan for art-inspired street activation for its buildings.

Longtime historic preservation activist Tod Bryant was among those criticizing the project last year, saying that the proposed look was not compatible with the surrounding area’s historic character.

The new proposal updates the exterior façade of portions of the 61 Wall Street building to prominently feature brick, to increase the visual appeal and character of the development, the narrative states.

Bryant, who co-founded the Norwalk Preservation Trust in 2003, said Tuesday that he and architect Bruce Beinfield have worked with the Redevelopment Agency over the past year to create that updated façade proposal, and, “What we’ve seen so far fits into Wall Street’s Historic District better than their original design.”

This is far from my area of expertise, but one question pops into my mind after reading this. What sort of redevelopment of the entire Wall Street area from Belden Avenue to East Avenue can be expected with this level of affordable housing? Don’t the two concepts go hand-in-glove?

POKO will go down as the worst deal in Norwalk’s history!

Let’s review what McClutchy will get from Norwalk taxpayers.

Norwalk gets
15 years of ridiculously low property tax receipts thanks to a special tax deal in the LDA
100 parking spaces as promised-NO
$2.2 million payment in lieu of providing public parking instead.

WOW!
Who is in charge of negotiating for Norwalk?

Tod Bryant, thank you for your work to help ensure this project is architecturally appealing and commensurate with the neighborhood.

@Jason..I would like you to weigh in on another matter which is loosely tied to this…Looking for your expertise. The state of CT is apparently thinking about buying some bankrupt hotels and converting them to homeless shelters. $18 million per year for 1,000 people. When you break it down its $1,500 per month PER PERSON..Does that make any sense to you?? I know question is slight off topic, but I thought you’d be able to give readers an intelligent viewpoint.

POKO was created under the 2004 Redevelopment Plan which has expired. Tim Sheehan admitted this on the witness stand and Judge Lee has brought it up several times.

Well that illegal plan is being challenged in court by yours truly.

Is McClutchy going to try to use the expired plan or the illegal plan?

As you can imagine both plans present serious problems.

And let’s not forget I own an easement running directly under the Tyvek Temple for access to my FC Bank building, and to load and unload.

I am suing Citibank right now to restore my rights!

Norwalk has way too many apartment developments underway which is not sustainable as many of the already opened apartment complexes around the city are not near even 80% occupied. We are becoming known as the affordable housing city which has not proven effective elsewhere in supporting reinvestment in needed areas. Wall street renamed the “ARTS DISTRICT” is a joke as there is one artist gallery opened near where Peaches was formerly located. Many establishments are closing…Bar Sugo CLOSED, Peaches CLOSED, Fat Cat Pizza CLOSED. It’s time for transformation of the area beginning with enticing new businesses such as Restaurants, Cafes, Delis, etc… Such a shame planning officials are not doing much to move things forward. They should work with our chamber of commerce and begin a true campaign to solicit new business in that area.

What Wall Street needs is less government involvement. The area has been smothered for 50 + years of good intentions.

In less than 2 years I have brought 10 new businesses to the area including 2 boutique manufacturers, a smoothie shop, a dentist, a art collaborative & gallery, a sneaker and clothing store and several others.

We don’t need the Econ. Development, the Redevelopment Agency, an enterprise zone etc. what we need is less rules and restrictions and a big WELCOME mat to businesses.

When there is huge government involvement you attract government dependent businesses looking for subsidies and handouts. Not hungry, scrappy entrepreneurs.

While I don’t pretend to be knowledgeable in all the details of this project, it appears Norwalk is just looking to put up as many apartments as possible with no consideration of where these residents will park or the additional traffic that accompanies more people. You can rave about mass transit but the reality is most people want to drive themselves. Along with that, parking is critical to the livelihood and success of every shop and restaurant. If they are to succeed their customers need a convenient, free place to park. Parking is a challenge almost everywhere in Norwalk, including residential areas. Who wants to live or shop somewhere when you have to ‘circle the block’ 10 times to find a parking space? It hurts everyone involved.