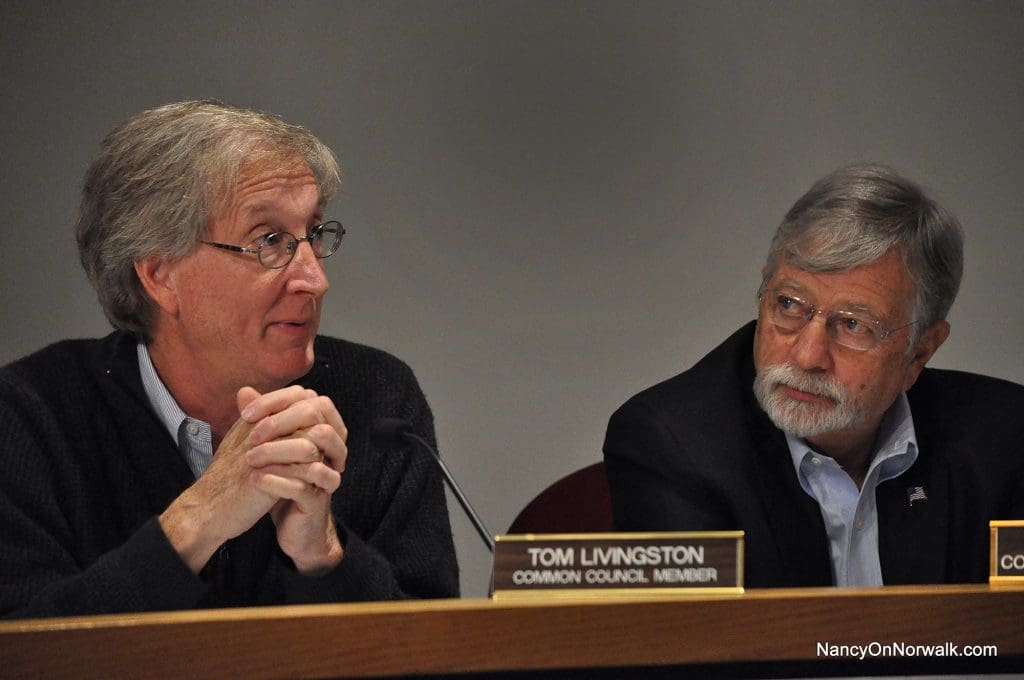 NORWALK, Conn. — The Common Council on Tuesday got business done in a short meeting held much earlier than usual, due to Yom Kippur. The topics:

One more thing, an after the meeting extra:

The Council voted 8-2 to give M.F. DiScala & Company the approval it needed to go before the Zoning Commission this week and seek approval for a 40-apartment building at 1 Bates Court in South Norwalk.

The conflict here revolved upon an adjacent piece of land also coveted by DiScala, a rocky parcel on the corner of Martin Luther King Drive and Lowe Street. DiScala had sought to buy that as well but Building and Facilities Manager Alan Lo has declared it buildable, meaning that it has to go through a Request for Proposals process, Land Use and Building Management Committee Chairman Thomas Livingston (D-District E) said.

Council member Rich Bonenfant (R-At Large) said the city shouldn’t be giving up the road before attempting to sell the corner lot, as the corner lot might be worth less without the road access.

Bonenfant made a motion to table the item. That failed 7-4, with the four Republicans voting yes and the Democrats voting no.

Not only that, but there’s a 39-foot high rock wall on the end of Bates Court where that property is, so the idea is moot, DiScala said.

Doug Hempstead (R-At Large) expressed a concern that Bates Court could go the way of Smith Street, with the city regretting selling it to a developer.

The city isn’t actually abandoning the road, it’s discontinuing it, Corporation Counsel Mario Coppola said. DiScala won’t own the road until the city hands over the deed and, “if the project doesn’t go forward and we don’t issue the deed the fee title doesn’t go to the petitioner,” Coppola said.

If the deal doesn’t go forward, “You can have it,” DiScala said.

Bonenfant and Michelle Maggio (R-District C) voted against the deal.

DiScala said the road portion is necessary because of corner of the proposed building would sit on it.

Indignant registrars
Norwalk is not Danbury, Republican Registrar Karen Doyle Lyons and Democratic Registrar Stuart Wells said, in trying to get the Council to authorize a bigger pay raise.

“We started asking you guys for a decent pay raise a year ago,” Wells said.

Over the last 25 years the registrars have lost 30% of the value of their pay to inflation and every year their benefits have been reduced, he said, commenting, “It ain’t right.”

“It’s not enough and it’s not fair, and I better not say more,” Wells said.

He left the room.

A short while later the Council passed the proposed pay raise as part of the consent calendar, meaning a unanimous vote with no comment.

The registrar’s pay is based on the range for an executive assistant, according to the Council packet.

With Faye Bowman (D-District B), Nick Sacchinelli (D-At Large) and Travis Simms (D-District B) absent to begin with, at about 6:15 p.m. Hempstead suggested tabling the Municipal Master Agreement on Right of Way Projects, a topic that has generated some pushback from the public.

The meeting had begun at 5 p.m. in observance of Yom Kippur, a day of atonement which began at sunset Tuesday.

The discussion should be held when members are in attendance, Hempstead said, suggesting the meeting end.

The vote to adjourn was unanimous. 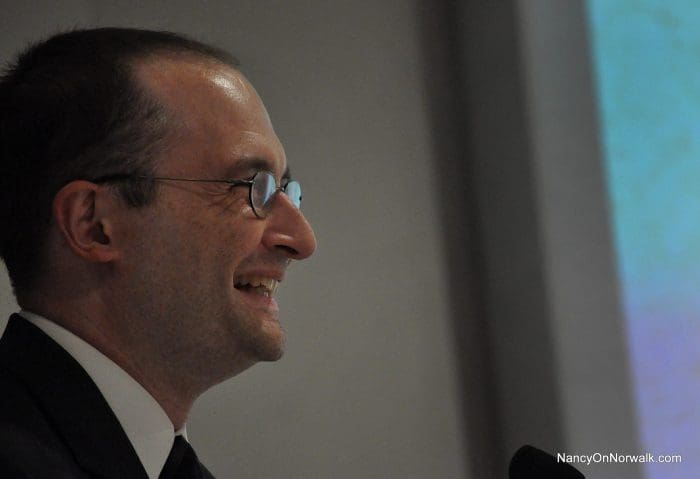 Attorney Brian Candela thanks the Common Council on Tuesday after being named assistant corporation counsel.

The Council voted unanimously to approve the appointment of Attorney Brian Candela as assistant corporation counsel.

The position has been vacant for a few years, Coppola said.

“We spent a lot of time trying to find the right candidate and I think I can say with confidence that we found the right person,” Coppola said.

Many candidates were interviewed and there was a recruitment effort, he said.

Candela, in thanking the Council, commented that he’s been a Norwalk resident for nine years.
His LinkedIn page describes him as a trial attorney at Carter Mario Injury Lawyers, who was honored as a Rising Star by the Connecticut Super Lawyers Business Edition in 2011, 2012, 2013 and 2014.

“He brings with him his expertise in tennis… since Oak Hills is more than just a golf course, and we want it to be so much more, I think this is a good addition,” Mayor Harry Rilling said.

Last but not least: Hempstead on Trump

Hempstead did not respond to a Sunday email asking for an opinion on developments in the presidential election.

On Tuesday, he offered NoN a brief but to the point opinion on Republican candidate Donald Trump: “Deplorable, despicable, and what’s worse is his attitude of entitlement.”

I am interested in this corner parcel. How do I buy it?

City should not give away any land, and Bates Court with 40 apartments, it’s a bad site. Maybe the youth of South Norwalk would appreciate a small center or the citizens of South Norwalk could come together with a special developer to donate funds or Corporation a nice play area, park. Even thou dealing with train noise? Why is it things can happen in Stamford and Bridgeport, other city, But Norwalk lose everything.

Nancy’s was remiss in not reminding readers that Yom Kippur services in the City’s synagogue began at 6pm. Yet the Common Council began a meeting at 5:30pm. I can’t recall any similar instance in the last 4 decades when the Council exhibited such boorish behavior. Even when Republicans had lock, stock and barrel over City politics for decades they never behaved so disrespectfully. Mayor Rilling and Council President Kimmel owe the entire Norwalk community an apology. Even after the fact.
Editor’s note: The Council meeting began at 5.

Good for Doug Hempstead. He has more … than Dick Moccia and some of the others
(This comment has been edited in accordance with our comments policy.)