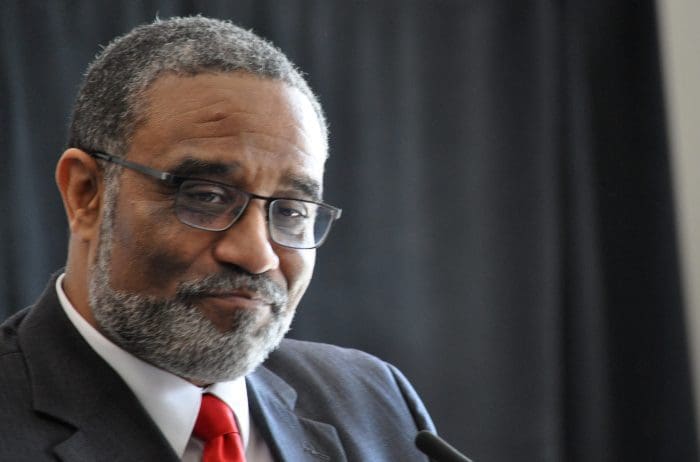 NORWALK, Conn. – The Common Council unanimously voted Tuesday to settle the lawsuit filed by former Norwalk Public Schools Human Relations Officer Bruce Morris, accusing NPS of discrimination against him in the elimination of his position.

The lawsuit was slated to go to trial Wednesday, June 22.

The case went to mediation in March.

Morris alleged that a written reprimand issued to him in late 2015 and the subsequent elimination of his job in the 2016-17 school year budget were motivated by his race, color and status as a State Representative, in violation of the Connecticut Fair Employment Practices Act. He also alleged that he was retaliated against due to his previous opposition to discrimination. NPS stated that his job was eliminated due to budgetary concerns.

Evidence presented by Morris includes emails sent by the-Board of Education Chairman Mike Lyons in 2015, in which Lyons referred to a possible “race war” if Morris were let go at that time and called Morris a “snake.”

Morris is nothing but a trouble maker!

Congratulations Bruce. Like Lynne Moore before you, you found a way to squeeze a few more dollars out of the taxpayers coffers. Now you can relax, retire (again), and write that book – “How I made bank, and never worked a day in my life”.

Taxpayers, you can bet others will follow in these footsteps – the playbook is already written, tested, and proven effective. When votes are at stake – count on the CC to roll over like an obedient dog. It’s all about the children.

Congratulations to Bruce Morris for winning the the M-V-O award for 2022. For those unaware of the award it’s the Most Valuable Opportunist award. Bruce is the inaugural winner. So Congrats to him. I’d like to also commend those who helped Bruce reach this lofty position. You should all be proud of yourselves. You’ve proven that if one plays his cards right, they can not show up for work, get paid and receive money once you’re found out and fired.
For those teachers who were harrased by Bruce and ended up retiring early or leaving the system, please come back. We need you. In fact maybe you too can find a great attorney and collect a few bucks for the hassle.
When will our elected leaders have the guts to actually fight for what’s right? Obviously, that wasn’t the case here.

How many years was this guy paid for basically a no show job?

The settlement should be public since after all it taxpayer dollars.

Hopefully part of the deal is he can’t come back to Norwalk. That would be a win.

It is comical however that anytime something is going to go to trial against our beloved administration here in Norwalk the council gives the thumbs out to settle out of court. All the while keeping it sealed from us taxpayers so we dont know how much more money we are wasting. All that is missing here is the beloved comment from the overpaid Chief of Staff Harry has because he is too busy at the SONO boat club negotiating the next high rise in town.

Tough to blame Morris for this. This is not only on Lyons watch but his emails are the smoking gun that torpedoed NPs’s position.

How dare you steal money from the kids? This is taxpayer money! Yes make it public we deserve to know how much money this evil person took from us!

While I’m not attempting to defend Bruce Morris, there maybe a lot more involved with this matter then has been made public. I believe that several past and present NPS administrators and BOE members have by their careless and arrogant actions, over an extended period of time, allowed this situation to take place. Better said, they totally mishandled the process. Sorry, but from what appears to be the situation is that they would likely lose the case to Bruce Morris if it is allowed to go to trial. Therefore reaching a settlement out of court would simply be in their best interest.

Norwalk is in a sad state of cynicism as I continue to read comments on the issues going on in town. I don’t know the details I knew Bruce Morris has an elder from Macedonia Church and through some of my pastoral experiences he always was a Christian gentleman. But I do agree we need transparency and the public has a right to know exactly what’s going on and no more behind closed door deals especially when it involves are public good.

Why is the City so eager to settle lawsuits EXCEPT when it comes to Jason Milligan? Seems like someone has a personal vendetta.

Concerning the question asked by Mitch A………I have been told by many who I trust that their logic is that it saves us taxpayers money. Even if they believe they can win, they will settle it out of court for $X instead of letting it go to court/trial for over that amount…….regardless. It’s no longer about right or wrong. It’s about money. And when it’s the taxpayers money they can use it anyway they want.. And often they want to settle out of court so the facts will never be made public, thus never allowing transparency. Out-of-court settlements can often protect the defendants from publicly exposing their actions and cheating embarrassment, which might cause damage to their egos.

Anyone keeping tabs on legal expenses paid out by our BOE over the past decade because of personnel infractions ? We don’t read about similar outlays paid out by our surrounding towns. Something unique about Norwalk City schools that encourages such outlays ? Other CT cities have similar size and frequency of legal claims ?