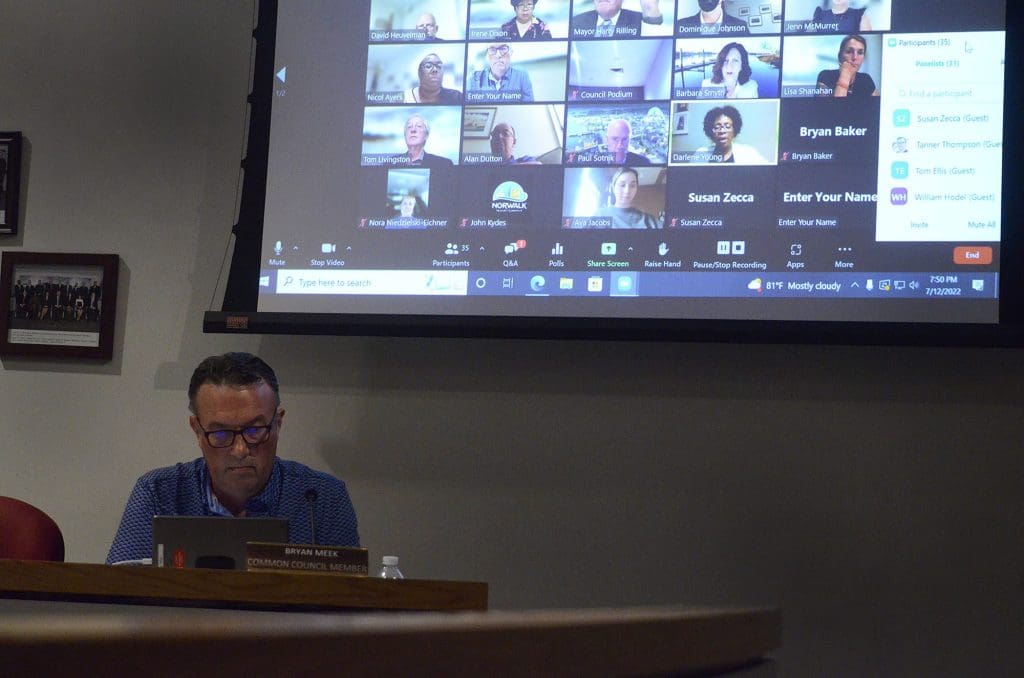 Bryan Meek, appointed last week to replace Tom Keegan as the only Republican on the 15-member Council, was welcomed by members of the Democratic majority in a brief Council meeting, where a $700,000 tree contract was approved and the Council opted out of a State provision for parking regulations. In addition, the Industrial Zone study and its zoning recommendations, eligible for ratification, were tabled to allow further thought.

All votes were unanimous.

Meek, in April, told District D Republicans that he would “figuratively” “put a fork in the Mayor’s eye” should he be appointed to replace Keegan, who has since retired to Florida. Meek won that vote handily but it was invalid given that Keegan hadn’t resigned yet, Town Clerk Rick McQuaid said. Last week, with a different opponent, Meek won the seat by one vote as District D Republicans tied on their first ballot but voted 7-5 for Meek in the second tally.

The next day, Independents for Norwalk founder Lisa Brinton advised Meek to “hold your powder” until fall, when citizens will return from vacation. “Fly below the radar, be really nice this summer,” she said.

Appointments followed and Norwalk Bike/Walk Commission Chairman Tanner Thompson was praised as a “huge transportation nerd” by Council member Josh Goldstein (D-At Large), who said Thompson’s reappointment is a “no brainer” given the “extraordinary job” he’s done in marshaling advocates and activists to make Norwalk more pedestrian and cyclist friendly.

Meek suggested that the Plan of Conservation and Development (POCD) “glosses over the Grumman Avenue corridor” and asked Thompson to “pay good attention to that because that seems where a lot of our cyclists end up on a weekend.”

“Vanessa and I both came away having learned a ton and really feeling like our time is well spent,” the volunteer said.

Later, a two-year “on call” agreement with Almstead Tree & Shrub Care Company LLC and Minutemen Land Services, LLC for the supply and planting of trees and shrubs was up for a vote. The agreement specified up to $700,000 on “task orders” between the two companies.

“This funding has already been through our stringent and careful protocol for assigning account numbers to ARPA dollars, and the tracking of it,” she said.

The City has a $130,000 contract with Almstead this year, Norwalk Chief of Operations and Public Works Anthony Robert Carr said. Given the ARPA funds, the City “felt it was prudent” to issue a new contract and keep the funding separate.

Given the specifications of the contract, Almstead bid $49,000 for a year’s work and Minuteman bid $55,000, Carr said. This set a price per plant and accompanying maintenance, but it’s expected that it will be about $350,000 a year. Almstead, the bigger company, will do most of the work and Minuteman will do backfill.

“We have two companies working pretty much year-round, to ensure that we could spend the $700,000 by 2024, which is required by the ARPA funding,” Carr said.

“I’m a little new here. So, allow me a little bit of wiggle room to be the dumb new guy, but I appreciate your, your work on this,” Meek said. A $700,000 grant for trees “sounds awesome” and “I guess it was coincidental” but he’d been in South Norwalk and noticed “four monster trees” were cut down, “I think it’s private property.”

Given the “blank RFP” that “didn’t really outline” the scope, he asked, “how does this all work? …Are there like standard work orders, the same way you would go through any kind of DPW work?”

“The scope has not been defined yet, we know that some of these plants will be tied into the MLK Corridor Initiative, we know South Norwalk is going to be a major focal point for the tree planting,” Carr said.

DPW wanted to get a contract in advance because there’s a tree canopy assessment expected soon and probably a tree master plan review within a year, Carr said. The legalese is different so the City can track ARPA funds and DPW will work to make the plantings equally spread through Norwalk.

Meek also asked if the pruning etc. would be done on private or public land. Carr said it’s typically not on private property, but the exception is places where “there’s not enough space in the current right of way.” He explained other technicalities.

Carr said the companies guarantee to water the trees for two years.

“One (question) is there’s a concern about not enough watering being done in the current situation,” Livingston said. “The other (question) is the guarantee doesn’t help all that much. Because after the two years they replace it and walk away, right?”

“Sometimes we have few trees that die right at the beginning,” Valadares said. Sometimes trees are planted on private property for beautification purposes and the owners agree to water the trees, but if it’s on the right-of-way the City usually waters them.

Livingston asked to see the RFP “to make sure we’re actually getting the best bang for our buck here.”

That had been a topic of extensive conversation. Niedzielski-Eichner felt the Council had been given inadequate information. She eventually suggested that DPW include links to RFPs in its memos so Council members could look them up, without the voluminous documents weighing down the meeting’s packet.

The Industrial Zone Study has been working its way through public hearings and meeting deliberations and was on the Council agenda for approval and ratification.

Livingston said it was tabled to give Council members more time to talk about it.

Diane Cece of the Eastern Norwalk Neighborhood Association (ENNA) spoke to the Council, making points she said were “brought up at prior meetings and public forums.”

The Norden Place parcel would change from restricted industrial to industrial zone two, and “we fear that there could still be a number of uses there, that would really be objectionable, because it’s mostly a residential area,” Cece said.

In addition, the language would allow a four-story, 65-foot-tall building in the industrial zone two, rather close to the height of a six-story building, she said.

The Council also voted to opt out of the State of Connecticut Parking Provisions of Public Act No. 21-29 (HB 6107).

Thompson referred to Norden Place when he commented on the parking issue.

“Generally, the best practice and the prevailing wisdom in urban planning community is that eliminating parking minimums where possible and reducing them otherwise is beneficial to walkability,” he said. “It sends the message that we welcome transportation besides cars and the development that enables that walkability.”

It tells potential residents that they don’t need a car to move here, he said, mentioning car free housing developments, such as one in Arizona. He didn’t know if “that would fly” here now, but “with a rewrite going on that that makes it easier for developers to have visionary projects like this.”

He said, “I know a lot of the concerns that you have, and the residents have about new development centers around traffic, right. And so, if we can somehow bring people to Norwalk into these new developments without them breaking their cars, we can mitigate that traffic. I think reducing eliminating parking minimums is a big part of that.”

Council member Darlene Young (D-District B), Smyth and Livingston also welcomed Meek. “I look forward to working with you as I’m sure the rest of the council does,” Livingston said.

Smyth said she and Meek had a “great conversation” Tuesday and learned that he once worked for a Department of Public Works department.

Council members focused on how the City can attract major firms bringing good jobs to Norwalk ? Our Poverty Rate has

remained unchanged at 10% for as long as we can remember. Attracting “big box” doesn’t provide jobs sufficient to raise families. We need the same enthusiasm for attracting new business with good jobs as our City does attracting developers erecting new apartments in our now “renters city” where renters out number homeowners. Making Norwalk even more transient. CT with its decade long stagnant economy needs vibrant cities to restart its once proud vigorous economy.

THANK GOD for this tree work. With our students failing to achieve anything close to reading level despite ever increasing budgets, THANK GOD we’re planting trees to distract. Our teachers are treated like dirt by current administration, but THANK GOD we’re planting trees. I guess it’s easier to build a facade than it is to handle the real problems facing our underperforming youth. THANK GOD for canopy. It keeps real issues in the shade.

@John – Go look at some of the outdated real estate photos of SoNo online. There used to be a LOT better tree cover on Washington. I’d say that’s a pretty high priority. Pound for pound, Washington is the most valuable street in this entire town, and those trees will be worth their weight in gold if Harry can summon the sense to plant them.

Do you have any idea what 700K could be used for to improve the life of this city and it’s residents?

I wonder how many of those will be needing pruning and trimming in the future to prevent power lines coming down in a storm. At what cost is factored into maintaining them years from now?

When power lines go down and costs of trimming/pruning we will all know who to thank for $700K worth that resulted in power loss.

The “Green New Deal” in full display. They are no longer hiding it. It’s all out for you to witness in all it’s glory.

Who want to bet in years from now that some will be removed for more developments of apartments or other “housing”?.

As a worker on Wall Street, I have to say that new trees anywhere in our neighborhood would be welcomed, (if SONO could spare a few) but on the other hand, SONO is Norwalk’s best opportunity to attract marine tourism. It’s got the Marriott, great restaurants, the mall, the Maritime Museum, Veteran’s Memorial Park and Marina, and the best harbor in Connecticut. Perhaps the council would consider enhancing the harbor master’s job by adding another larger dingy dock and more deep water moorings. My husband and I travel up the Connecticut coast every summer and are disappointed by the limited access to South Norwalk by the water. Norwalk’s small businesses could really use this extra traffic by tourists. You know what they say, “if you build it, they will come”. Boaters are looking for places to go.

I agree with CT-Patriot. Trees? Who needs them? Certainly not me! Every fall they drop their leaves without any consideration for the taxpayer dollars that have to go towards leaf removal. AND they harbor squirrels, which are basically bushy tailed rats. How many of my tax dollars go towards removing dead squirrels from our roadways? No trees, no squirrels, no dead squirrels! While we’re at it, have you ever thought about how much money the City could save by paving over Vet’s Park? No more mowing, no more turf restoration after the Oyster Festival! If you want green, move to the Amazon!