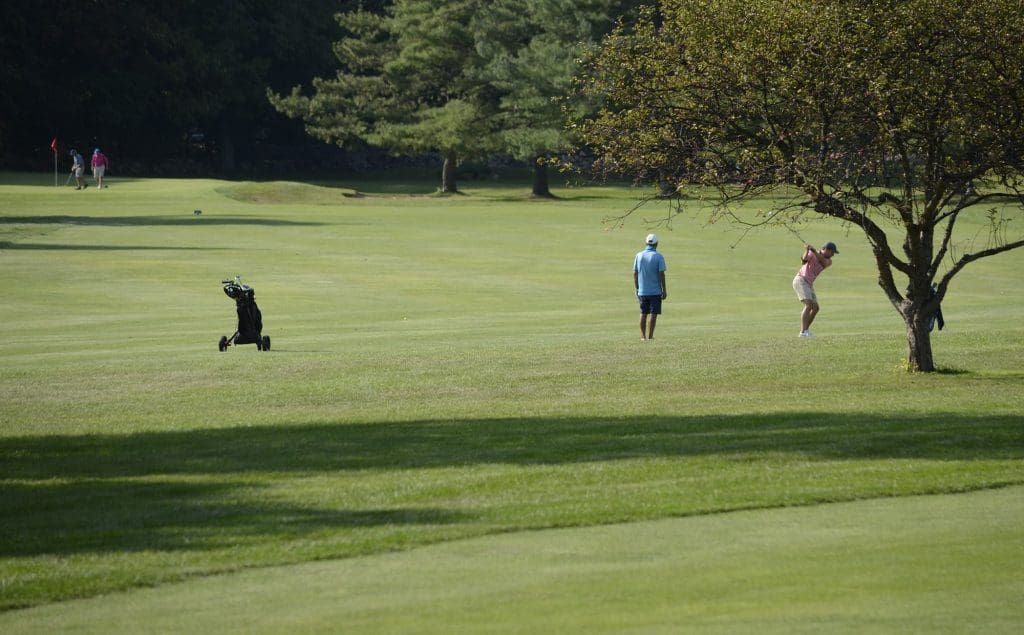 NORWALK, Conn. — The drive to ban pesticides from City property is moving to the public hearing stage.

Oak Hills Park is chiefly impacted by the drafted ordinance, while adjustments were made to accommodate school property needs.

The Oak Hills Park Authority has agreed not to use neonicotinoids, chlorpyrifos, and Roundup, which contains glyphosate, Ordinance Committee Chairwoman Lisa Shanahan (D-District E) said. Those are the “products which we were particularly concerned about.”

Although the drafted ordinance prohibits anything containing glyphosate, neonicotinoids or chlorpyrifos, an exception is made for fighting poison ivy, as this is a problem on school properties.

Any product that isn’t organic is “restricted.”

“Research shows that agricultural pesticides – a term that encompasses insecticides, herbicides and fungicides – are one of the main drivers of insect declines worldwide, along with habitat loss and climate change. Forty percent of insect species face extinction in coming decades, leading scientists to warn of ‘catastrophic ecosystem collapse’ if we don’t change the way we farm,” Friends of the Earth states. “Many pesticides commonly used to grow food in the U.S. kill bees, butterflies and other beneficial insects. These same pesticides also harm human health. Among those of highest concern are neonicotinoids, chlorpyrifos and glyphosate.”

“Pesticides necessarily contaminate soil microbiology, plant life, wildlife, marine species, groundwater, rivers, and water wells. These lethal chemicals blindly kill and make no distinction between the unwanted pests and beneficial insects and healthy organisms. Many of these beneficial insects can help limit unwanted pests on properties where Organic Land Management practices are used,” the drafted ordinance states. “…Fortunately, there are numerous effective and safe alternative solutions, as well as best property practices, that can be employed for sustainable lawn, soil, land, garden, and tree care.”

“We fashioned our definition of organic product, based on the model code for pesticides that’s being used across the nation,” Shanahan said.

Restricted products would be banned within 200 feet of a tidal wetland, watercourse or wetland, and on school properties unless the school’s principal ask that they be used, and an interdepartmental pest management team (IPMT) would govern the City’s pesticide application, reviewing applications for permission to use restricted products under certain conditions, such as when there’s an imminent threat to human health, the environment of public welfare and safety. The team would include the Recreation and Parks Director, who would chair the team, the Health Director, the Chief of Operations and the senior operations officer.

This has all been worked out at two Ordinance Committee meetings.

The section defining exemptions “is a result of our conversations with Oak Hills,” Common Council President Tom Livingston (D-District E) said. “We talked through what they use and why.”

“We’re happy that they have agreed to take off those the worst of the worst pesticides from their usual maintenance of the property,” Shanahan said, adding that “everybody was unhappy” after that discussion, “which means that it’s probably a pretty good compromise.”

Commenting to the Ordinance Committee, Fire Marshal Broderick Sawyer said the Authority stores chemicals in a cargo container by its maintenance shed, with the proper venting and Material Safety Data Sheets (MSDS) available.

“I actually read every single label of everything that Oak Hills uses,” Shanahan replied. “Because it does have a lot of information about the storage and the importance of storage and keeping the storage away from waterways and things like that. So if you have all of that kind of stuff, so it’s reassuring to hear that you inspect it, and that it’s appropriately done.”

It’s important that the Authority take care of City property but there are also abutters who will be affected by pesticide use, Shanahan said.

“The one thing about organics, you have to keep on top of the maintenance, and they also cost quite a bit of money. We have to apply things a lot more often, in order for them to be effective,” he said.

He also said there aren’t enough staff members to constantly hand pull weeds. Therefore, the department is experimenting with products, such as using vinegar, which, “when combined with dish soap is supposed to be a great organic alternative to some of the stronger pesticides. So we’re going through a trial and error basis now see, to see what works, and what will be the most cost effective for us being that we are such a small department.”

But the biggest issue on school properties is poison ivy along fence lines, “sometimes creeping over to playground areas,” Hughes said.

Shanahan noted that her throat closes when she’s exposed to poison ivy and needs to get a shot, so she knows the severe issues poison ivy can cause, but said, “I’m just hoping that you guys keep experimenting with lesser evils than having to go for, you know, some of these really prohibited chemicals to fight something. That just causes a rash, especially in school grounds. Because these Roundup type of chemicals, they’re really bad. And we don’t want them around children.”

The poison ivy concern led to the exemption of being able to use prohibited products, as long as it’s not within 200 feet of a waterway, Livingston said.

Council member Thomas Keegan (R-District D) asked if the Committee would talk about possible financial impacts to Oak Hills and the Recreation and Parks Department.

The ordinance marks the City leading by example, Shanahan said.

Conservation groups are waiting for the ordinance to come out, and “we’re hoping to do is a couple of library talks where we can talk about good practices for lawn care,” she said. The hope is “that people will start wondering whether they ought to be doing this on their properties as well.”

Ultimately the goal of the over-the-top Green’s is to close Oak Hills. They will peck away until they achieve their goal.

I am part of a larger committee working to ban these for all of Fairfield County. Taking smaller steps such as banning in municipalities is often the best approach (as opposed to going for CT all at once and too early on). We were successful in getting chlorpyrifos banned most recently but the neonics remain a challenge for other political reasons. So common council may not have to concentrate on chlorpyrifos now and can use its energy towards banning the neonics.

These pesticides pose both human and environmental health issues. It is paramount, however, that proposed banning includes suggesting acceptable alternatives—otherwise you risk swapping one set of problems for another. It is therefore essential CC does their homework on this in order to make their proposal as strong as possible.

The bill is called SB120 is AN ACT CONCERNING THE USE OF CHLORPYRIFOS ON GOLF COURSES AND NEONICOTINOIDS FOR NONAGRICULTURAL USE. https://www.cga.ct.gov/2022/JFR/S/PDF/2022SB-00120-R00ENV-JFR.PDF

Anyone interested in joining, which includes outreach and optional trips to Hartford to lobby, just message me and I will put you in touch with the attorney and environmental advocate spearheading this entire effort. It takes a village!

A municipal ban on pesticides on public areas is intelligent, pressing and an environmental message that is high time to tune in. Norwalk wouldn’t be pioneering as Stamford passed such an ordinance a year ago . A decade ago, Rowayton quit the use of toxic pesticides on public properties they manage after a concerted effort to make information possible. So informed minds reach the best conclusions.

Our waterways shouldn’t be further polluted by toxic chemicals , plus birds are dwindling because we’ve poisoned so many insects that sustain their lives.

Do know that we can all care about clean air, water and land without giving up on other human rights issues. It’s not one or the other.

Just keep your nose out of my private property

It’s impressive that Norwalk’s Common Council, with great thanks to Lisa Shanahan, is supportive and moving towards sound stewardship for our local environment. Thanks also to Professor Kipp for her leadership.

I think some of the commenters who poo-poo the effort to ban pesticide/herbicide usage on city properties, seeing it as either irrelevant or not very important, miss something that IS important: Poisoning the earth hurts human beings, not to mention all other life forms. Without the earth in healthy shape, we have nothing. Our own health suffers.

What could be more important at this stage in human history than acting to mitigate what we’re experiencing globally already–an imbalance of nature caused by human activity. Decade upon decade of pesticide and herbicide use has impacted wildlife, and ecosystems on which we and they depend, not to mention poisoning agricultural soil and our very food supply. We need to really nail this before we wreck the environment (and ourselves) even more.

This effort is misguided and will ultimately solve nothing. The same narcissistic progressive liberals who think drinking from a paper straw is going to change the world continue to push agendas which are more about virtue signaling than actual progress. I would much rather have my children play on a properly managed natural grass field than a crumb rubber covered sauna like artificial turf field. Clamping down on licensed professionals whom take great care to properly apply pesticides isn’t the answer. Just wait until your kids field is covered in clover and dandelions in the spring, crabgrass in the summer and dug up by birds and animals looking for grubs in the fall. I understand the need to save pollinators, and there are ways to accomplish that short of “BAN EVERYTHING!!!” Do me a favor, next time it rains, drive around Norwalk and Westport and see how many homeowners still have their sprinklers running, that’s a problem.

@ Patrick. you are so right. The fact remains that I can go to home depot and buy whatever i want on the shelf and apply it totally wrong and at the wrong amount. You can get all the fertilizer and round up you can grab there. But because myself, Ken Hughes, and golf course supers are licensed and supervised by the DEP we are the evil ones that are irresponsible. We dont just randomly use chemicals where they arent needed. Do you think the No Mow May is a health thing? Think about all the ticks that are manifesting in there. Way better things to worry about. The guy that got cancer must have been totally abusing the way he used round up the experts say. Not sure how your kids will be damaged by spraying the weeds in the crack of a sidewalk. Will he pull the weeds out afterwards spray it and eat it? The organic stuff doesnt work. If it did we would all use it. In my business Round up is one of the best things going to keep a nice landscape.

The Norwalk River Watershed Association applauds this proposed ordinance in Norwalk. We need to act to protect water from overuse of pesticides. Studies show 2-5% of herbicides are taken up by plants and the rest moves through the soil, destroying its integrity, and washes into waterways where freshwater and saltwater species are harmed. Norwalk’s shellfish industry is put at risk as well as our birds, bees, pets and people. And for what? Lawns without dandelions and violets? It’s not worth the enormous cost.

Good move , lawns are overrated! they add nothing of value. We need to grow more native flowers and grasses! those are more beautiful than a boring flat lawn.