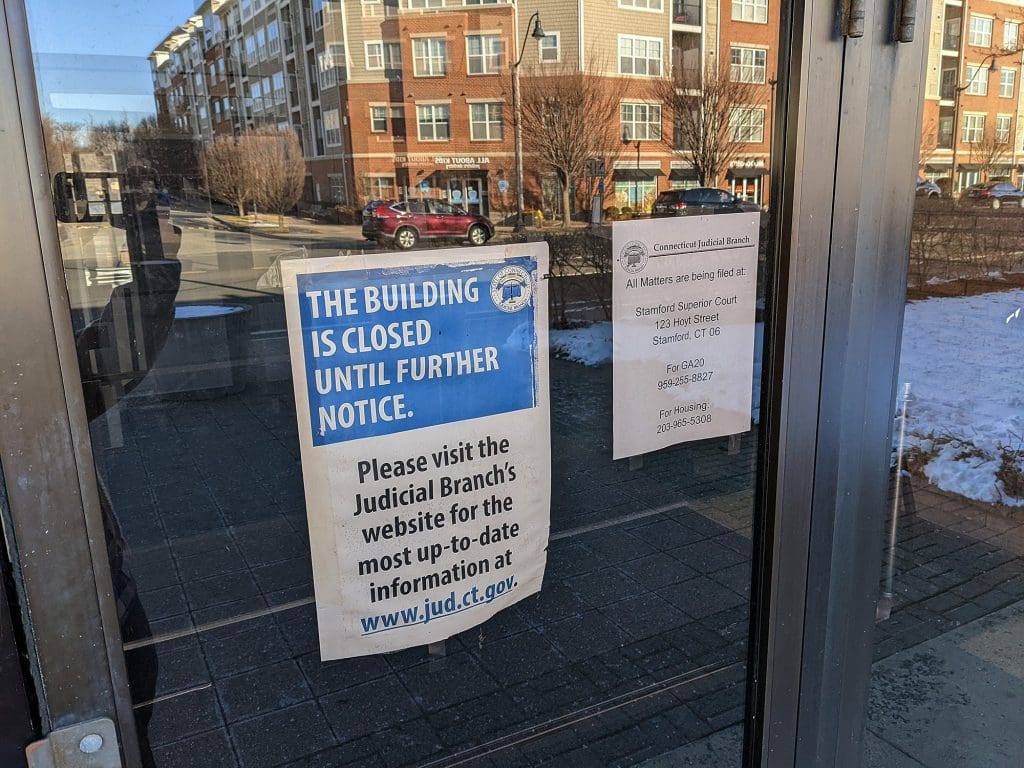 The doors to the Norwalk Courthouse on Belden Avenue, across from Avalon apartments, as shown in the reflection.

NORWALK, Conn. — The doors to the Norwalk Courthouse remain locked, to the disappointment of lawyers and defendants alike.

Connecticut courthouses were shuttered due to COVID-19. While most have reopened, “Judicial Operations remain suspended in both the Enfield and Norwalk Court,” said Rhonda Hebert, Program Manager of Communications for the Connecticut Judiciary.

The continued closure is puzzling to some, and a rumor reached NancyOnNorwalk: management of nearby apartments would rather not have it reopen because of the types of people it brings to the neighborhood.

“The courthouse remains closed due to a shortage of judges according to the Administrative Judge,” Rilling wrote. “I am not pleased it is still closed as it is very inconvenient to our residents and our police officers.  Having to travel to Stamford during morning rush hour is not a pleasant experience.”

Hebert said the “suspended operations” in Enfield – a one-judge courthouse – and Norwalk – a two-judge courthouse – “provide for the most efficient use and deployment of Judicial Branch resources and staff, significantly security staff, as the Branch continues to manage its operations in the face of pandemic-related challenges.”

The situation has been “compounded by the surge of Omicron over the past several weeks and the challenges it has presented, including exacerbated staffing issues for the Judicial Branch.”

Neither State Senate Majority Leader Bob Duff (D-25) nor State Rep. Travis Simms (D-140), who sits on the Joint Committee on Judiciary, replied to an email asking about the process of appointing new judges.

On Thursday, Gov. Ned Lamont appointed 22 as judges of the Superior Court.

“These men and women that I’ve selected to become judges not only have the competence, skills and proficiency to serve the court with integrity but come from a variety of backgrounds that provide them with the important shared experiences of the people who will come before them,” Lamont said.

Rilling said Saturday he hadn’t heard of anything about the courthouse reopening but, “this should be a step in the right direction. The reason things were a bit tied up was the fact there was a lack of judges.”

“At this point, {the courthouse is in} the same status,” Hebert said Monday.

“The continued closure of the Norwalk courthouse is deeply troubling,” Attorney Michael Skiber wrote. “The lack of a courthouse in the ninth largest municipality with one of the most diverse populations in Connecticut has caused a significant impediment to receiving timely justice, access to the court system and a familiarity that the Norwalk courthouse provided.  Not every defendant and litigant has the financial means to travel to Stamford by personal car or rideshare in rush hour traffic.  Even more significantly, many have to take off work for the entire day because of the increased travel time and increased size of the dockets that are run out of Stamford.  Norwalk definitely needs its courthouse to reopen.”

The judge shortage in Stamford is exacerbated by the fact that many judges resist Stamford assignments for obvious reasons; traffic and costs. And the Norwalk criminal docket situation pales in comparison to the family docket fiasco. Stamford family cases are being shipped up to Middletown where one judge is assigned to handle an overflow of more than two hundred cases from Stamford and other districts that were backlogged due to the courthouse shutdowns.