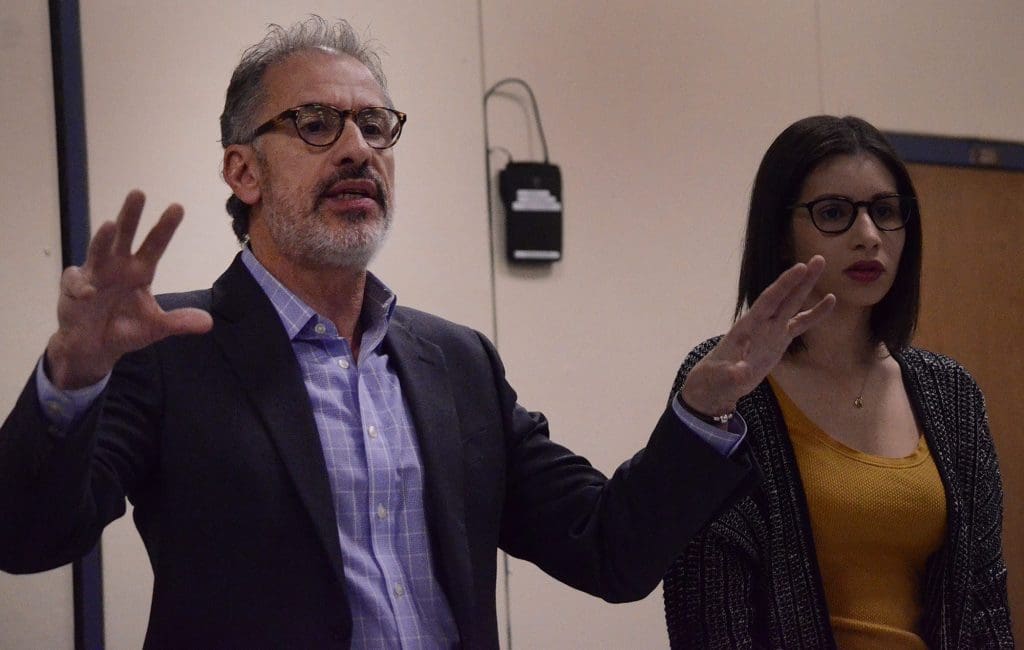 NORWALK, Conn. – The leader behind Norwalk Democrats’ sweeping success in the last two municipal elections is stepping down.

“I think in six years, we turned the corner,” Democratic Town Committee Chairman Ed Camacho said Wednesday. “I think we’ve made some progress with the DTC, we have made institutional changes that I think will serve the party well going forward. I think frankly it’s time for new blood, younger people to take over.”

Rilling initially presided over a split Council, with eight members in the Republican caucus, including Democratic member Bruce Kimmel, and seven in the Democratic caucus. But things have changed dramatically: in 2015, Democrats took over control of the Common Council, winning 11 seats on the 15-member board. And in 2017, they did even better, winning a 14-1 majority. They repeated that feat last fall.

Democrats have also won every Board of Education seat in the last two elections.

“I didn’t think he did a great job,” she said. “I thought it was a lot of divisiveness, especially on a racial lines…. the leader sets the tone.”

Norwalk Republican Town Committee Chairman Mark Suda did not reply to an email asking for a response to the news.

Camacho mentioned that he wasn’t going to run for chairman again, at Monday’s DTC meeting, without fanfare. Melendez said no one has stepped forward as a candidate for chairman and Penn-Williams volunteered that she doesn’t want the role. The vote is in March.

“I hope that the next DTC chair, unifies the group. Because I think it’s ridiculous,” Penn-Williams said Wednesday. “When I first started, the Democratic Town Committee was not the way it is now.”

Monday’s DTC meeting started on a contentious note, as District B leader Bruce Morris stood to request that the vote for an At Large Council member be tabled to the next meeting and Camacho said it wasn’t the appropriate time to bring the matter up, that it was later on the agenda.

Penn-Williams observed that Camacho seemed angry – Rilling had also looked angry – and said Morris “was going to ask the same question. What difference did it make when the question was asked?”

Camacho had been concerned that the DTC would have to vacate the library at 8:30 p.m., that the meeting couldn’t go overtime. The DTC went on to make Dominique Johnson the new Council member, over objections from Morris and other District B Dems. The idea of tabling the vote was turned down, largely on racial lines.

The racial divide isn’t new: when Camacho was elected chairman, most of the black contingent reportedly walked out, if not all.

Everyone knew how Monday’s vote would go, Penn-Williams asserted. Johnson came out of nowhere and was “handpicked,” she said, opining, “I think that you need to be on some committees, you need to be a Commissioner. And then it’s a gradual thing. It’s gradual. A person that no one knows is on the Common Council? In government? I have a problem with that.”

Rilling wrote Wednesday, “Although we have our differences from time-to-time, I believe our DTC is strong and united; more so than we have been in quite some time  Whoever takes the helm will benefit from the momentum we’ve gained in the past six years and will have an opportunity to move us forward.”

Asked Wednesday about the Democrats’ success, Camacho said, “I think you have a formula. The formula is quite simple: bring more people to the table, bringing more voices to the process, then … of paramount importance is running quality people for mostly unpaid office. And then the rest takes care of itself.”

The DTC voted in January 2015 to expand its membership from 35 to 55, allowing 11 members per district instead of seven. This “institutional change” was highly contentious. Some opponents suggested that the DTC would not be able to get a quorum, but at the time Camacho said, “With the addition of four people there is a universe of people that each of those people come in contact with who might become interested in actively participating in party politics as a result.”

Now Camacho and Melendez are crediting that change with the party’s subsequent success. On Wednesday, Camacho spoke of having “more people of good will” than not.

“In every situation, you have people that are maybe more interested in being oppositional or being problematic, but the more people you have involved in the process, the  more likely you’re going to have people that are just going to want to do the right thing,” he said. “So I think we did that and we as a result of being able to recruit and run and elect really good, competent people, more about working hard or about doing what is in the best interest of the city – really, everything else takes care of itself.”

The expansion is the most significant achievement of the last six years, Camacho said, calling it and everything else a group effort, not his achievement.

“I think that expanding the DTC, making it less of sort of a private club and … involving more people in the process, I think you end up with a better result,” Camacho said.

Rilling recruited Camacho to the DTC. So what does this departure mean as Rilling heads into his seventh year as Mayor?

“Ed’s decision to step down has no impact on my future plans,” Rilling wrote. “He has put a tremendous amount of time and energy into his chairmanship. I’m sure it has been challenging and exhausting.”

Some say this term is it for Rilling, that he won’t run again.

“I haven’t heard that,” Camacho said. “I will say being DTC chairman has been easier having a Mayor as confident and as committed to the city of Norwalk as he is. So I don’t know he’s not gonna run again. My hope is that he does, because I think the city is moving in the right direction. So that’s a decision he needs to make.”

He continued, “I will support him, whatever he decides. If he decides to run again, I will work as hard as I can as a member of the DTC and as a private citizen to achieve that result.”

Camacho said he has no plans to run for public office and mentioned a “return to obscurity” as well as continued political involvement in both state and local politics.

He hopes the youth steps up because the consequences of the kinds of issues that are ahead will be “felt by people who at the moment under the age of 40. And so I think it’s really time for people in that age bracket to step up and deal with it. I hope that’s what will happen.”

Melendez is in her mid-20s. She wrote:

“The Norwalk Democratic Party that many of us joined years ago is different today because of Ed Camacho’s leadership. Under his leadership, our town committee went from 35 members to 55 members. This change, although disputed at the time, made it possible to help create a more diverse DTC. The incoming DTC will have 35 women. Throughout the years he dealt with the ups and downs that comes with being the leader of a big tent party with a lot of history. Under his leadership, we elected super majorities on both the Common Council and Board of Education and reelected Mayor Rilling to his fourth term. His legacy speaks for itself. We will continue to build on the progress he helped initiate.”

Kudos to Ed Camacho for a job well done. The GOP should hire him immediately as a consultant, although I fear he would turn them down. How anyone in the Democratic party can not see his success is beyond me. It seems like the Democrats “big tent” in Norwalk is fractured. Based on demographic changes this will only continue. Thank you Ed for giving a damn about Norwalk. As
a non-chairman maybe you can take a stronger stand on the lack of support our “city” gets from Hartford. I look forward to that happening.

Ed Camacho did a terrific job as DTC chair. He will be missed. I sincerely hope he remains engaged in Norwalk and Connecticut politics.

Ed has done an outstanding job of recruiting qualified, dedicated candidates and volunteers to serve the city on boards and commissions. He will be missed. It’s a tough job and Ed deserves our thanks.