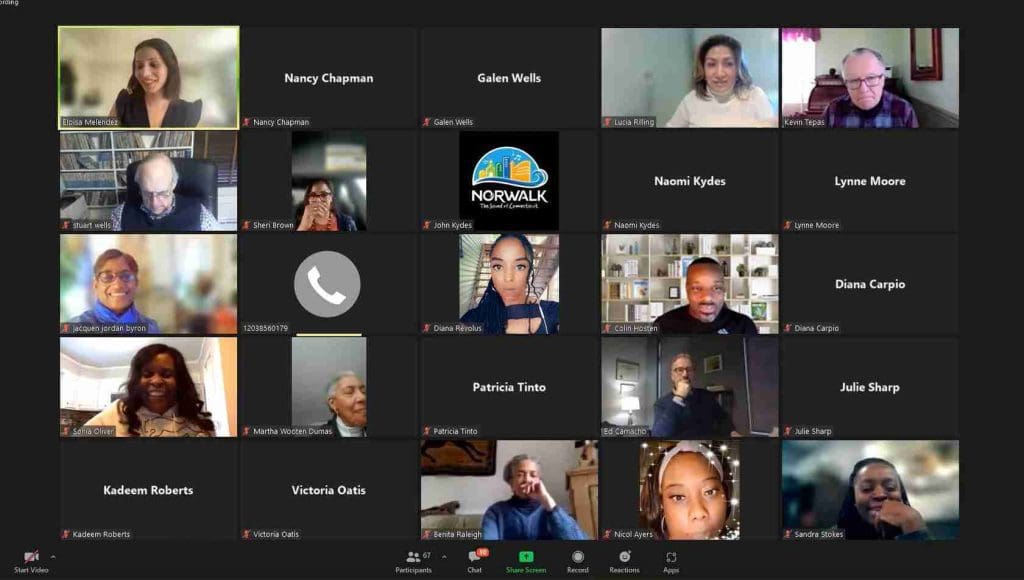 NORWALK, Conn. — Norwalk Democrats chose Eloisa Melendez as their leader for another two years, crediting her for recent successes.

“A lot of folks sometimes say actions speak louder than words,” Colin Hosten said at Monday’s Democratic Town Committee meeting on Zoom. “I think that’s the case. Eloisa is one of the most eloquent people in the DTC. We have the successes that our party has enjoyed in elections in 2020 and 21 to prove that, in very, very difficult and challenging times.”

Melendez first became chairwoman in 2020, taking over after long-time Chairman Ed Camacho stepped down. Democrats have dominated Norwalk politics since 2015, when Mayor Harry Rilling cruised to his first reelection and Democrats took the majority on the Common Council. The Norwalk Board of Education is entirely Democratic now and the last three municipal elections have seen only one Republican winning a Council seat.

Monday’s DTC meeting was preceded by District E drama, an unprecedented primary for DTC seats. When the dust settled, the slate presented by the DTC in January had won every DTC slot.

Hosten, who had been recording secretary, nominated Hensley.

Hensley “is a dedicated Democrat who has worked on campaigns both here in Connecticut, and in other states, including Iowa,” Hosten said. “I know him as somebody who has great eye for detail and fairness and accountability, all of which are essential qualities and a recording secretary.”

Melendez “has helped us carve a larger seat at the table for Norwalk when it comes to state politics,” Hosten said.

“She is an incredible mentor,” Jordan-Byron said. “I mean, she is a force to be reckoned with. …I learned so much under her leadership, and I know that she has nothing but the best will for anyone who wants to be part of this organization.”

“The last time we were all together in person was March 9 of 2020, just days before everything shut down, and all of our lives changed. And I really didn’t know what that was going to mean, for the DTC, for our party for anything,” Melendez said. “But you know, for me at that moment, it was like the responsibility of leading our party. And together, we did it I, you know, we’ve been very successful.”

“You are the ones who give us support to get across the finish line,” he said. “So your job is very important, we value it, and you’re helping to make the city grow and flourish and be one of the best cities, if not the best city, which it is, in the entire state of Connecticut.”

Mayor Harry Rilling said, “I’ve been around for a long time in Norwalk, and I think this is the best team that I’ve ever seen. Whether it be a Republican team, whether it be a Democratic team, this is a team that is committed, dedicated and professional.”

1- Why are they still doing Zoom meetings? When will the laziness end?

2- Where is the diversity in this Zoom picture? The local dems like to talk about how diverse they are, but it sure doesn’t seem like it.

Pat
Norwalk is like other CT towns and cities. “Diversity” is something we talk up about. Our BOE focuses on diversity in terms of backgrounds with school teachers, administrators, an occasional local attorney, business person. Surrounding towns have a different notion for their BOE members. They seek out residents with major business/financial management backs. Their impressive results speak strongly for that “approach”. Focusing on demonstrated abilities, not diversity.

We don’t seek major diversity among our City Hall employees. Our Mayor is commendably committed to professional search; our able Finance Director reflects that approach. Our BOE follows “other” search procedures. Not professional search.

On the whole during the tough times of Covid our City was well served by its key employees who risked their lives every day coming to work – our first responders, fire and police. During those tough times we didn’t ask if we were meeting “diversity” requirements. Maybe there’s a lesson here. Getting the job done is our first requirement. Especially when it comes to giving a kids a public school education that meets CT Edu Dept standards. Diversity hasn’t helped us here. Our BOE needs notice.

Pat – The diversity is on the screen! White/black/hispanic/male/female/young/old/lgtbq+, and that is what I can identify by the faces and names I know of the 25 blocks I can actually see in this picture of the screen. What you call “lazy” many of us call smart and an efficiency tool. Utilizing Zoom cuts down on travel time to and from meetings (a bonus given current gas prices!), allows people who may need child care to participate, includes those who may not be able to drive at night, allows people to participate while traveling, and those are just a few benefits.

So I ask – if wonderkid Melendez would be so kind as to one day publicly share the story of her meteoric rise to the top of the local DTC – so future dreamers could similarly succeed.

Or was it the streets and bars of Norwalk, where the lessons of what matters was imprinted? Those holding court at the Station House weren’t just telling stories – they were giving pearls of wisdom, or maybe tactics.

Was it experience? A solid 7-10 year stretch with a renown corporate firm? Did you excel at personnel management, organization, marketing, or messaging? Or – all four?

Or was it connections? The right folks in the right places – who mentored your “growth”. Gave your ambition some direction? Everyone knows – these can be real difference makers. Except – the definition of “privilege” is – it’s not what you know, it’s who you know. Careful.

And as those “in-the-know” in Norwalk readily accept – politics in general is messy, and in Norwalk – even dirty. NDA’s for everyone, coming or going. Let’s go to court (cha-ching). “Executive Sessions” = orders. FOIA requests get information highly redacted. So many secrets. So – how did you know when to say no? Hum.

Many may cheer the ascension of Ms. Melendez to the top of the DTC, and I truly think – personally – she is a legitimate “case study” for young pols anywhere. Seriously – Candice Owens is getting click’s and views – but our own Ms. Melendez is the operating “figurehead” of an organization that is transforming our city – so she should get greater recognition. No question – I want and hope people remember exactly who did this to Norwalk.

BUT lastly – I simply wonder, at what point does the ambition – in Norwalk – have the same effect as a backdraft? Trading pieces for places can be devastating.

You gotta go with the flow!

@ Patrick – Your comments are a little harsh but completely understandable,….and fair

You’ve lived here long enough and seen enough of local politics to observe that Norwalk is governed by the “Team”. Not Party leaders. Now that wasn’t true when Norwalk was governed by the late Mayor Esposito and Counsellor Larry Cafero. (We had good schools back then.) But it has been true ever since. And likely to continue for the foreseeable future.

As long as we don’t have a sizable Downtown business community with Office Buildings and good jobs we’ll continue to be half a dozen pleasant suburbs surrounding a depressed Downtown. Even our City Hall is located elsewhere.
Norwalk is a transient community. So change comes slowly. Our residents like it that way. Does our BOE really run our pubic schools ? Our Common Council really run our City Hall ? We’re doing ok but not if you have kids in school. That’s a problem for us.