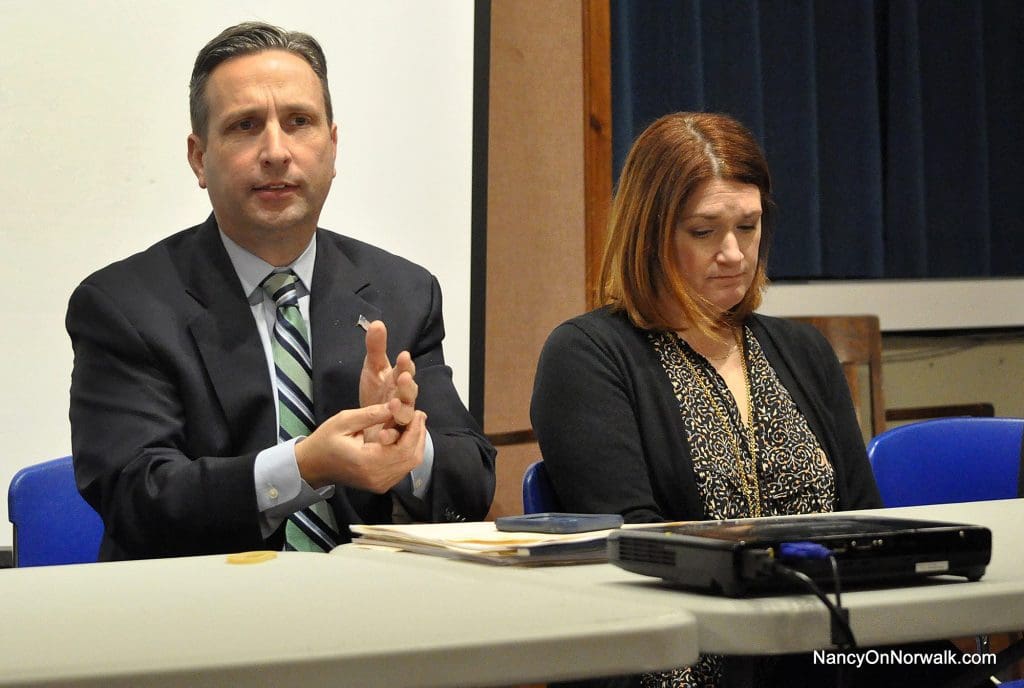 NORWALK, Conn. – Bridgeport residents made their way to Norwalk on Thursday to challenge State Senate Majority Leader Bob Duff (D-25) about changes he helped make to education funding in Connecticut.

“We were very disappointed that we were not put into that equation,” said Charles Mebane, decrying no additional funding for charter schools.

Norwalk will get more funding through the new ECS formula but the changes will be phased in over 10 years. Norwalk is estimated to receive $300,000 more in 2019 under the new ECS formula than it did in 2018 ; if the formula were fully in place and funded, Norwalk would receive roughly $4.8 million more, according to the Connecticut School Finance Project.

The new formula uses the same low-income student weight that the old formula had, but also adds measures for concentrated poverty and English Language Learners, Roy explained, adding that Alliance School Districts will always have the level of funding they received in 2017.

One unhappy audience member called the changes a “tweak,” which Duff denied.

“If we were just going to tweak the formula then we could have just put more money into what we had and hope for the best, rather than saying, ‘OK, we are going to change the way in which we measure the kids and who is getting funding, what districts are getting funding and who is entitled to state funding …and also what we have done in the past on the 2012 education reform bill,” Duff said. “I think, my opinion anyway, there has been a lot of progress made. Sometimes it takes a while to see if what you have done is actually working, but there were people who wanted to keep changing the 2012 law every year. You can’t do that. You’ve got to give everything a few years to see if what you are doing is actually making a difference. … Is it done? No, but I think we made significant progress.”

Up to 30 people attended; perhaps 10 were out of towners there to complain about charter schools being left out of the formula.

“Why weren’t we put into the equation?” a woman asked, after explaining that she chose not to put her children into a failing school system

“This is something that we pursued,” Democrats for Education Reform Connecticut State Director Amy Dowell said. “There were a lot of decisions that were made that were not going to solve every problem… For a variety of political reasons, it didn’t happen.”

“We flat-funded the charter schools,” Duff said, asserting that some politicians wanted to cut the funding for students moving up into a grade that hasn’t been established yet. 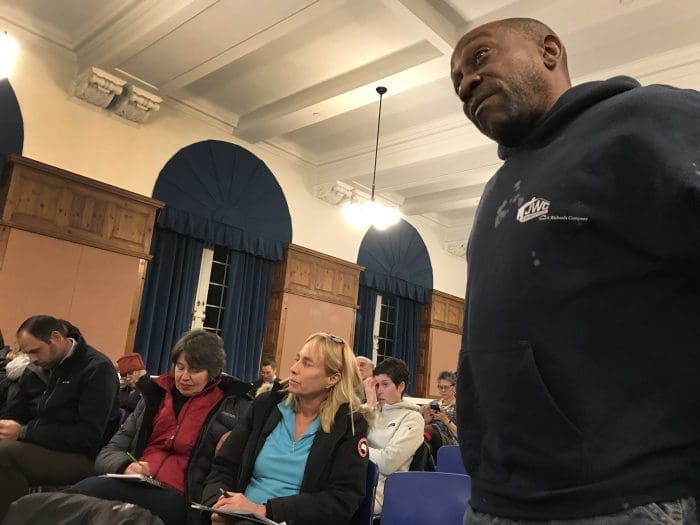 Mebane said that wouldn’t have affected many schools.

“To be fair, Sen. Duff was working on a funding formula that did include charter schools in it. It wasn’t included in this, but that was his proposal,” Dowell said.

“I wanted to include every kid. The end product did not reflect that. I have been to these charter schools in Bridgeport,” Duff said. “…I think one of the reasons I worked so hard on education funding reform was because I want all schools to do well, not just charter schools. I am sure on this panel there is disagreement on whether not charter schools are effective, whether they are worth the money and whether or not the scores are or true.”

Connecticut needs to close the achievement gap so that there are qualified employees for the jobs that are available, Duff said.

A woman asked why Duff couldn’t make the change, given that he is the majority leader.

“I am the majority leader and I think we would not have education funding reform had I not that the effort. It doesn’t mean that I get everything I want,” Duff said.

“As you have said you are not Joseph Stalin and you cannot impose your will, but I would hope that you would make a commitment to keep trying to fight for that because our kids are all public school kids and they deserve the same funding that a traditional public school children do. We are all entitled to a fair and equitable education and being so underfunded makes it really difficult,” said Andy Sternlieb, chairperson of Waterbury’s Brass City Charter School.

“We are united in looking for a way to solve what seems to be broken here in Connecticut, which is the reason for the CCJEF lawsuit and the judge really did throw it back to legislature last night,” Yordon said.

The Connecticut Supreme Court on Wednesday overturned a ruling made by Judge Thomas Moukawsher in the lawsuit filed by the Connecticut Coalition for Justice in Education Funding; Moukawsher had ordered Connecticut to change its educational funding system.

“Some teachers do not have the right mind frame,” a Bridgeport mother said. “They shouldn’t be there but they are part of a union and they have a job.”

“Tenure is misunderstood,” Yordon said. “I think university teachers have tenure and they are very difficult to fire. Connecticut teachers do lose their positions.”

There’s a system, with multiple factors in it, but “in very stressed school systems those elements may or may not be functioning,” she said.

A school district “has put a good deal of resources into hiring and onboarding that teacher,” Yordon said. “It makes no sense to fire them and it usually isn’t necessary. What that teacher needs is a year with a mentor, a couple of classes, it’s different for different people … the skills can be developed. It’s not easy and it takes time, but I have seen it happen.”

“It’s a big ship, it takes time to turn this,” Morris said. “…I think we’re going in the right direction.”

“I give Sen. Duff credit, as majority leader of the senate, he was one of the leaders on the ECS changes and making sure that there was a real balance,” Morris said. “He doesn’t get a chance to get his way. He’s got 36 senators, you know what, you’ve got to get 19 to vote your way or at least get 18-18 and then get the Lt. Governor to do something different. Then you’ve still got to go downstairs to the house where you’ve got another 151 members…. This is my first year since 2006 when many of the possibilities and things that we were looking for really happened with ECS, and really balancing the education cost sharing formula.”

“This time, a lot of the stars aligned,” Duff said. “I was in the position I am in to try to help force it through, the best that I could. You had the CCJEF vs. Rell court case at the same time … and I think you had a number of people who said, ‘You know, the time is right to finally get this thing done. We are tired of having a political formula … and by the way, we are doing all of this in one of the toughest budget times.”

“What makes us feel confident that going forward the legislature is going to adhere to this formula?” a mother asked.

“We had a bipartisan budget this year,” Duff said, going on to assert that it’s important that the legislature not go back to old bad habits.

“There’s a reason why we had the largest achievement gap in the nation, which is starting to shrink. There’s a reason why we have kids who are not prepared in our big cities… I think that having this formula, that an overwhelming majority of legislators voted on – 33 to three in the Senate, I forget what the number was in the House – that there’s some ownership of that,” Duff said. “… There’s always the threat of another lawsuit. I hope that parents that are here tonight continue to speak up.”

(This pdf is explained by Katie Roy in the video at bottom.)

Making excuses for one’s failures is not a defense.

Where u there? What support or idea did u share?

This was a Democratic talk session. Where does this pernicious idea come from that if you weren’t there, you can’t have an opinion? Isn’t that what news sources and video are for, to keep us informed when we don’t or choose not to attend?

Given Democrat super-majority control of the Legislature for the past 7 years up until this past year its puzzling they haven’t resolved the ECS funding formula. And in a State with many prominent private colleges why we spend a billion plus annually on UCON while shortchanging our truly needy students in our major depressed Cities. Why is funding public colleges, when there are many private alternatives more important than adequately funding inner City public schools for which there are alternatives whatsoever.

I saw FB that the BOE republicans trashed Mr. Duff for this event. I simply ask where where they? Where were the parents? Dr. Admoski was a no show.
The facts are simple, the formula was flawed, it has been adjusted.Is it perfect, … NO. is it better yes. To grandstand and besmirch Mr. Duff is not productive.

@EverMindful, they were not invited to this event. This was Duff’s event. It was a democratic event masquaring as an info session on Education funding. It’s not just BOE Republicans who trashed Duff. Lots of people trashed Duff for what was essentially a political stunt. If Duff had wanted other members of the BOE besides Barbara Myers-Mitchell, he would have invited the entire BOE. If Duff had wanted Republicans from the legislature, he would have invited them instead of seeing Gail Lavielle in the audience and making a hasty offer that she join him on stage. Why voters tolerate the tomfoolery from Duff is anyone’s guess.