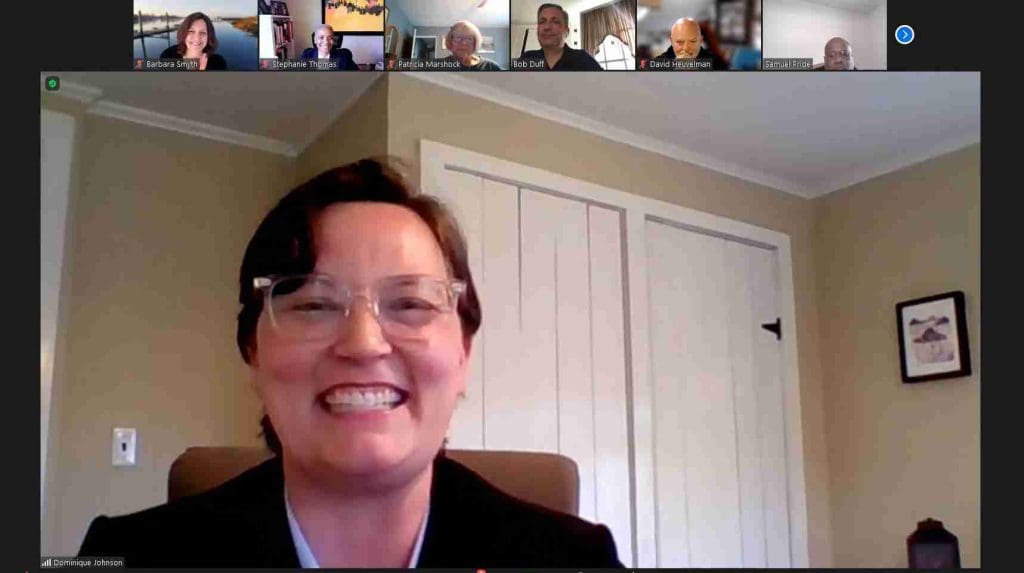 District 143 Democrats on Wednesday endorsed Johnson, a Common Council at Large member, for the State Representative candidacy. Thomas was elected to the post two years ago but has won the Democratic endorsement for Secretary of State.

“Dominique comes very highly qualified,” said Lynne Moore in nominating Johnson. “If you look at her background in terms of her education, she earned a B.A. in communication studies, then an M.A. in communication and a Ph.D. in Urban Policy Studies. Dominique has served in many roles in terms of her career. She’s been a public college professor. She’s been a published educational researcher, where she wrote more than 20 articles about informal mentoring and what that does in terms of a positive effect on the education or resiliency of sexual minority youth.”

Johnson is was also active for Georgia Democrats in Atlanta, Moore said. A Council member since January 2020, Johnson is “a tireless worker” and “a dynamo,” who “does her homework” and “thoughtfully interacts with her constituents.”

“Dominique will seek our opinions, and she’ll be our voice in Hartford. She will do continue to collaborate. And of course now, once elected, she’ll do a fine job of working with the other members of the House and the Senate,” Moore said.

“I’m just so confident that Dominique will same passion and integrity that she has on the Common Council in Hartford, and I can’t imagine anyone who would fight hard for us,” Smyth said.

“I think she will be fabulous, not just for Norwalk, but for our little sliver of Westport that we have here as well,” Harris Falk said.

The district boundaries have been moved, eliminating Wilton from the equation. District 143 had been reliably Republican before Thomas won it in 2020.

“I’m very sentimental about the 143 and also the new people in the district. So it wasn’t just anybody that I could sit here and vote for,” Thomas said. “… In addition to learning and dealing with the policy side of issues, she really embodies what is really important to me, which is keep keeping people in politics. And you know, she really has a heart for the people.”

Thomas continued, “I know that that heart coupled with that awesome brain, coupled with the knowledge she has gained about local issues in Norwalk, and I know she will learn about every issue in Westport, and to bring that knowledge to Hartford, makes her a huge asset for the entire town, both towns, the entire state.”

Johnson mentioned Wednesday’s announcement that Norwalk and Stamford will receive 60% reimbursement for all school construction projects for the next 25 years, and said, “You just see what that teamwork in that collaboration can do in Hartford, and if you know me, I want to be part of a team.”

“I will be there for Westport as I am for Norwalk,” she said, mentioning that as an at large Council member she represents everyone in the city.

“I care deeply about equity. And a lot of the work I’ve done in Norwalk centers that and I will promise you, I will continue to do that in Hartford,” Johnson said. “And of course, health and well-being is a big focus. I know a lot of us care deeply about the mental health of our communities right now and that’s another initiative that I’ve been working on the Council that I will be very passionate about in Hartford.”

She mentioned the rally held last week after it became apparent that the U.S. Supreme Court is tipping towards overturning Roe v Wade and said “it just reaffirmed to me how everything we do now is an act of love for future generations. We have rights because people fought for us… So we need to fight for what is right this November. And we’ll do it together.”

CT hasn’t had many Legislators with major business experience. Helps explain why CT’s economy has remained stagnant for an entire decade under Democratic rule. And likely to remain unchanged. As long as our public employees remain our “largest industry” we know CT’s future. And why our youngsters leave for other States to secure their careers.

I heard her speak for the first time at the Rally for Roe recently and I found her words inspiring and very authentic. I like her focus on equity and she seems very approachable. She has my vote! I’m excited about this!