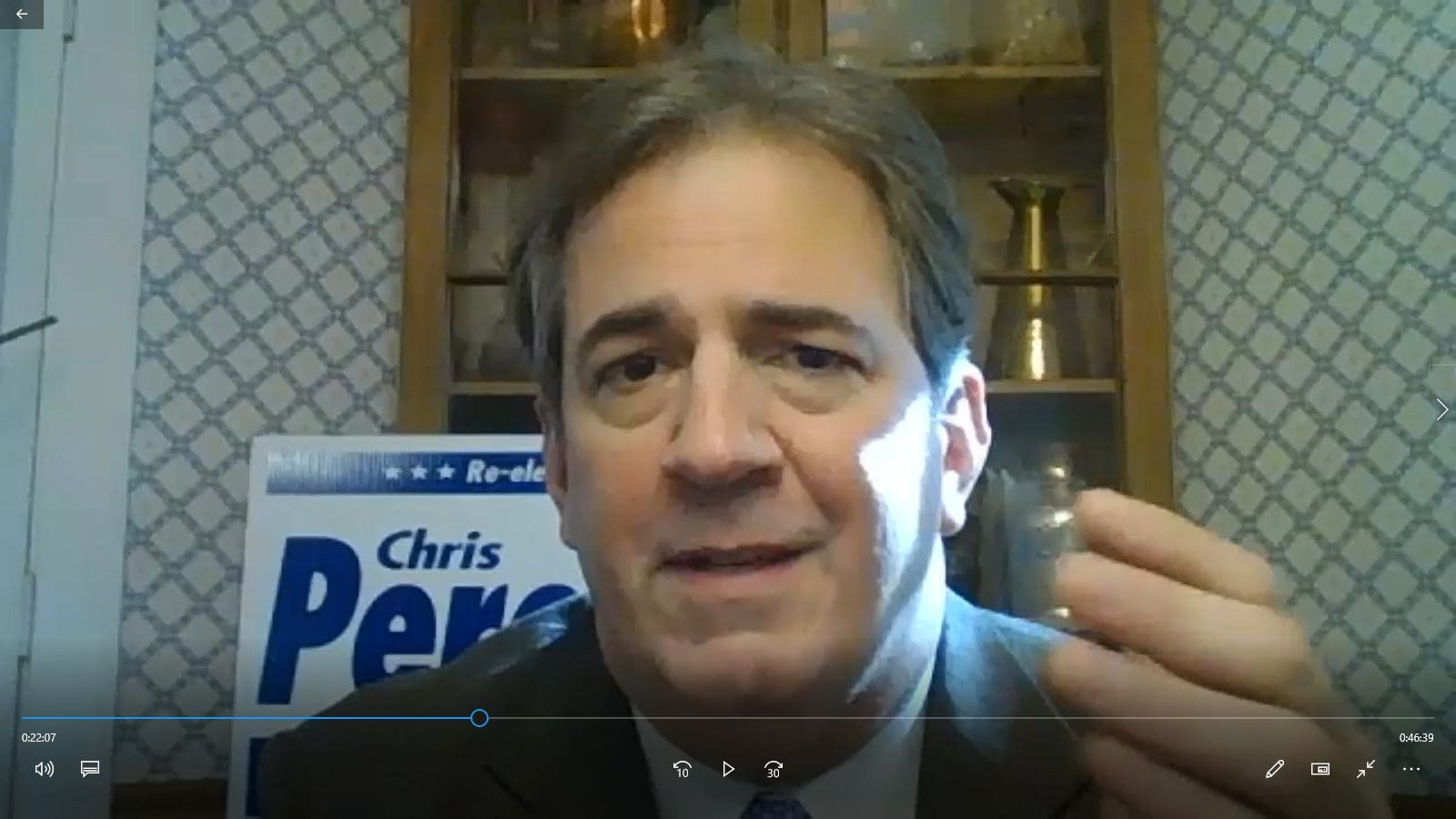 That confirms a no surprises lineup, laden with incumbents:

“We have really great candidates for our own delegation,” Duff said. “We have good State Senate candidates around Connecticut and really working to elect more Democrats and feel very good about the fact that Joe Biden will be at the top of the ticket. And it will be a real contrast to our current President, who, let’s say, is not handling this crisis in the best the best of ways.”

“I’m just really excited to, after tonight, we’ll have our full slate and that we’ll go on from there,” Democratic Town Committee Chairwoman Eloisa Melendez said.

Himes, former Goldman Sachs Vice President, is seeking a twelfth two-year term in Congress. The Greenwich Democrat appears likely to face Jonathan Riddle of Norwalk as his Republican challenger. Riddle won the Republican endorsement but may face a primary challenge.

Himes won the Democratic endorsement at the 2020 Democratic 4th Congressional District Convention held May 11, unanimously via a vote of acclamation, according to a press release.

“There is very little to celebrate,” Himes said in a Facebook message, lamenting the many American deaths due to COVID-19.

“If you think about it, this country, which we know to be the greatest country in the world, was unprepared because it has a President who cannot see beyond his own self-interest and his own ego and his own ratings,” Himes said. “We were not prepared to test and treat Americans all over this country when the coronavirus arrived with ample warning.”

Democrats need to dedicate themselves to change this November and counter “what is in the White House right now,” he said.

“History is on our side because you can twist Americans into some cult-like devotion for a little while by praying to their fears, by trying to convince them that their problems are somebody else’s fault. … that never lasts very long in this country. And that’s one of the reasons why we are the greatest country in the world,” Himes said. “So I could not be more proud to accept the nomination today.”

Perone is running for a ninth two-year term, having begun his service in 2005. He is facing former City Clerk Ellen Wink as his Republican opponent. Perone serves on the:

Perone is a “seasoned skilled incumbent” who has been “deeply involved in some very key and strategic initiatives at the state level” that “have impacted us here greatly in the Norwalk area, and all throughout Connecticut,” Common Council member Greg Burnett (D-At Large) said, nominating Perone.

“He has focused on our infrastructure and transportation initiatives,” Burnett said. “He has also been actively involved in supporting several of our current COVID operations, such as fielding several calls related to the unemployment situation, working with manufacturers to bring PPEs across the state and also into the Norwalk area. He’s been involved in working with small businesses to increase their capacity and keep their doors open as much as possible, going forward.”

Perone has been involved in supporting the Norwalk P-Tech Academy and “will be very instrumental in terms of bringing the focus to bring Connecticut back to a stable and secure economic standard and status,” Burnett said.

Board of Education member Barbara Meyer-Mitchell seconded the nomination, in a statement read by her husband.

“Chris has been a supporter of education in Norwalk,” she said. “He had a big hand in bringing P-Tech to Norwalk. He supported the change in ECS formula in 2017 is bringing $10 million of additional education funding over this decade, and hopefully he will help the effort to fund our new Norwalk High School. Chris will use his good relationships in Hartford and help Norwalk navigate the public safety and economic challenges presented by the COVID-19 pandemic. His commitment to addressing our transportation infrastructure challenges has been so important in moving the state forward.”

Perone thanked everyone and said, “I think… the COVID epidemic has really changed the landscape in Connecticut in terms of really what our focus needs to be, not only in economic development, but really how the social safety net is deployed, how we are funding and where we are prioritizing our dollars. I think that the epidemic has revealed, really, the serious inadequacies of how we are able to supply our hospitals with PPE.”

“Somebody had mentioned the Department of Labor, I’ve made a comment that my house in some ways seems to be a satellite office of the DoL,” Perone said. “A lot of folks are calling me directly or reaching out to me through Facebook, and so just my office is working on 20 or 30 cases for unemployment benefits for people. So I think that obviously going forward, we want to make sure that our Department of Labor is fully up to scratch in terms of their operating platforms, their system platforms. It’s, again, it’s one of these areas that that was revealed to be coming up short, and its capacity to help people in, in this kind of crisis.”

“Travis has done a excellent job of representing us,” Sonia Oliver said. “…I personally gave someone his name to reach out to regarding an issue with their unemployment… he got back to them the very next day … and that young man got his money. So he’s out there he’s working hard was constituencies, doing what he has to do for us and keeps us up to date and informed.”

“When a candidate represents a community that may be less seen and often less heard, then you must also be fitted for the challenges that will exist from coming or needing to represent marginalized or often overlooked community,” Ron Banks said, expressing support for Simms as a “heavy lifter for those of the 140th district.”

Simms has “tried to be a voice for the voiceless and hear people out regardless of whatever their affiliation is,” Darius Williams said.

“I am truly humble about this experience,” Simms said. “And again, it’s great to hear the feedback from my peers and colleagues here locally, knowing that I’m putting forth the work ethic and the character that I’m displaying in Hartford and on the local level to make sure that we have great representation in Hartford.”

“Stuart Wells is a forward thinker,” Banks said. “He plans and acts decisively, rather than reacting to each situation or eventuality. … His own inner commitment to the ideals of public surface service compels him to show up when he does not have to and to stay long after everyone else has gone down.”

Wells, a veteran registrar, has his office door “always open to every citizen, regardless of your views or your opinions. And regardless of how you may differ, and the phase that you have to present before him in his official role, Stuart Wells serves all citizens of Norwalk well,” Banks said.

“Stuart Wells is, as far as I could tell, the best Registrar of Voters in the entire state of Connecticut. He knows his stuff,” DTC Chairman Ed Camacho said.

“Stuart has an excellent reputation around the state with the Secretary of State’s office and with other Registrars of Voters,” Duff said. “I really do look to Stuart for a lot of leadership.”

Wells said he’d sent out a “rather lengthy explanation of all the changes this year” due to OVID-19.

“We keep changing the rules as we go, and that’s making life lots of fun,” Wells said. “I don’t know how many more shoes the Governor and the Secretary of State have to drop in terms of changes, but I suspect the closet is not empty yet. So I will be keeping you all informed, and thank you for your confidence in me.”

Regarding Chris Perone and bringing $10 million due to changes in ecs funding. That figure although true is a grain of sand on a beach. It’s the equivalent of fighting a building fire with a garden hose. If he’s proud of bringing that to Norwalk he should resign in shame. To retirate pre-covid talking points our ELL crisis is costing Norwalk 10s of MILLIONS PER YEAR!! Our state was in a fiscal crisis before covid. Perone has done Zero to alleviate our pension dilemma. It’s time for voters to truly understand what is going on in Hartford. Lastly, to our East Norwalk reps – Make sure to drive down to Cove section of Stamford before voting on higher density zoning in your area….Thank you for listening and Go Mets!

What would you have done differently than our great President Bob Duff? I don’t think Connecticut is doing very well. Take a look at the nursing homes!

Valerie
Please tell me that you are not attempting to blame Bob Duff for the nursing homes.

This whole lot is a disgrace.

Ron,
She is not blaming duff for the nursing homes.

JustaTaxpayer Actually if the President didn’t lie about the virus at first and call it a hoax maybe this could have been avoided.

Joe Ruggerio
How do you know did you ask her? Maybe you are just covering for a fellow Duff/Democrat hater?

@Ron do you have a link to that?

Blame Bob Duff? Obviously, he has no control over the Governor and is simply a lap dog for the Senate Democrats who gave him his shiny title in return for selling Norwalk out. I’m told by those in the know that his own party thinks he’s a tool. Sad.

Ron, time to enlighten you with the facts:

A responsible listening to Trump’s remarks, however, reveals Trump said no such thing. Trump was charging Democrats with politicizing the virus to score cheap points against the administration as they did with the Russia hoax and impeachment.

Those are facts, he never said the virus itself was a “hoax”.

Ron…what? That is a junior high comeback. Of course I don’t have to know her, it is written in the post. I understood what was written.

Please stop with mind dumbing ridiculous innuendos about “knowing” and “covering”. To see how bob duff doesn’t represent his constituents and the kids of our city, panders to the governor, and is basically a lap dog jumping on the bandwagon for all things “socially unjustified” doesn’t require friendship, it’s a group of keenly aware voters.