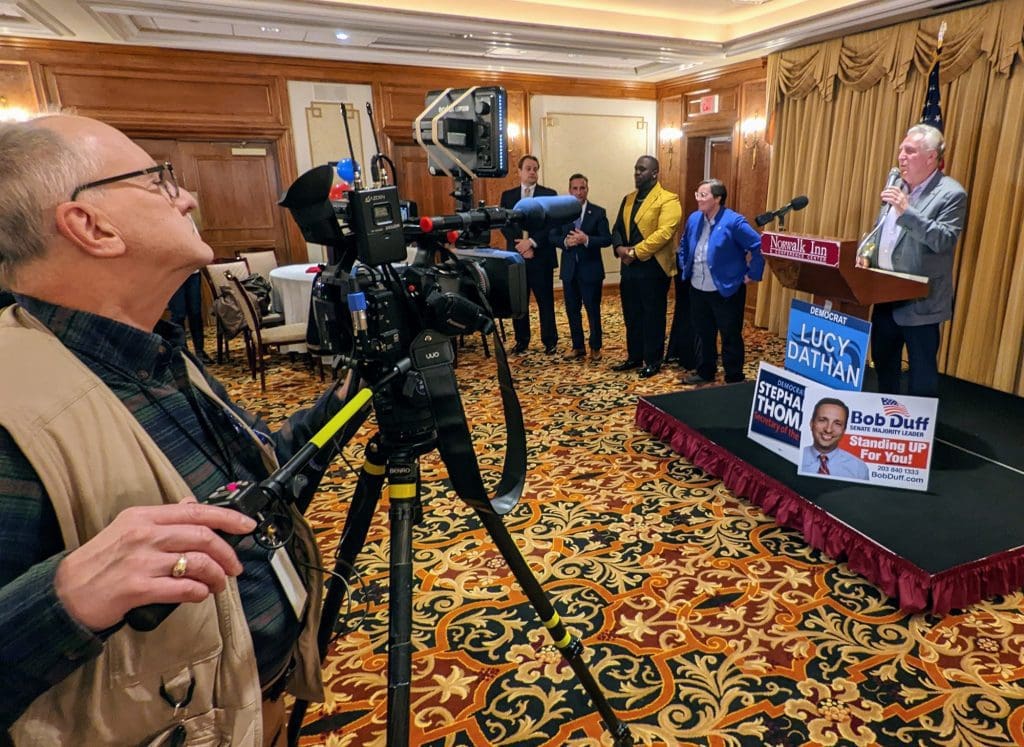 “Boy, do I love the even years,” Mayor Harry Rilling said, speaking to Democrats in the Norwalk Inn. “The odd years is when the mayor runs. So I’m loving these even years. … We have four big winners tonight.”

“People came out and they came out strong for the Democrats tonight,” State Senate Majority Leader Bob Duff (D-25) said. “… It is so humbling to win and win, again, what I believe is a good mandate.”

Norwalk Republicans, meeting at a restaurant owned by Republican District 142 State Representative candidate Don Mastronardi, expressed bafflement in what was nonetheless a festive atmosphere as they waited for vote results to come in. Some expressed disgust when they heard that State Rep. Lucy Dathan (D-142) was announcing victory across town, as they didn’t think the race had been decided yet. 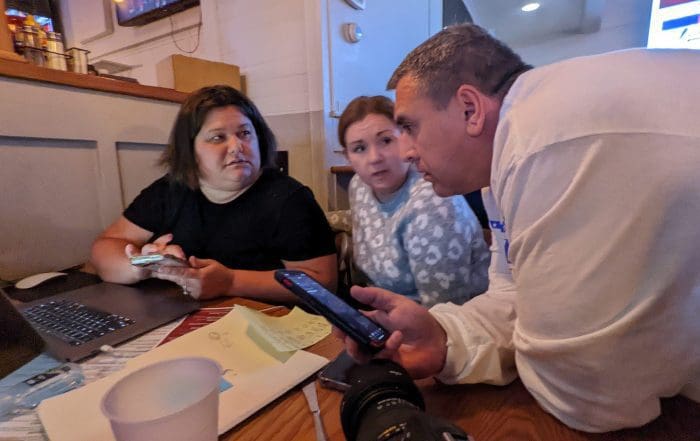 “The good news is you are the top Republican vote getter,” Diana Paladino said to Mastronardi, in the Dry Dock Bar & Grille, before the results became obvious.

Independent Party candidates were also at the restaurant. Katherine Snedaker, who did not come close in her a bid to win one of two Norwalk registrar seats as the third candidate in the race, commented to a friend, “Every time, we do a little better.”

At about 9:15 p.m., Norwalk Republican Town Committee Chairman Fred Wilms was ready to acknowledge the results.

“At this point, it looks like the Democrats have a clean sweep in Norwalk and I want to congratulate all those that won,” Wilms said. “But more importantly, I really want to call out all the Republican candidates. We put together an excellent group of candidates who worked their butts off and really stood for the issues that matter locally. And, you know, they really put in a really good solid showing. Unfortunately, Norwalk continues to go Democratic in state elections, starting from (Gubernatorial candidate Bob) Stefanowski all the way down to the state legislators.” 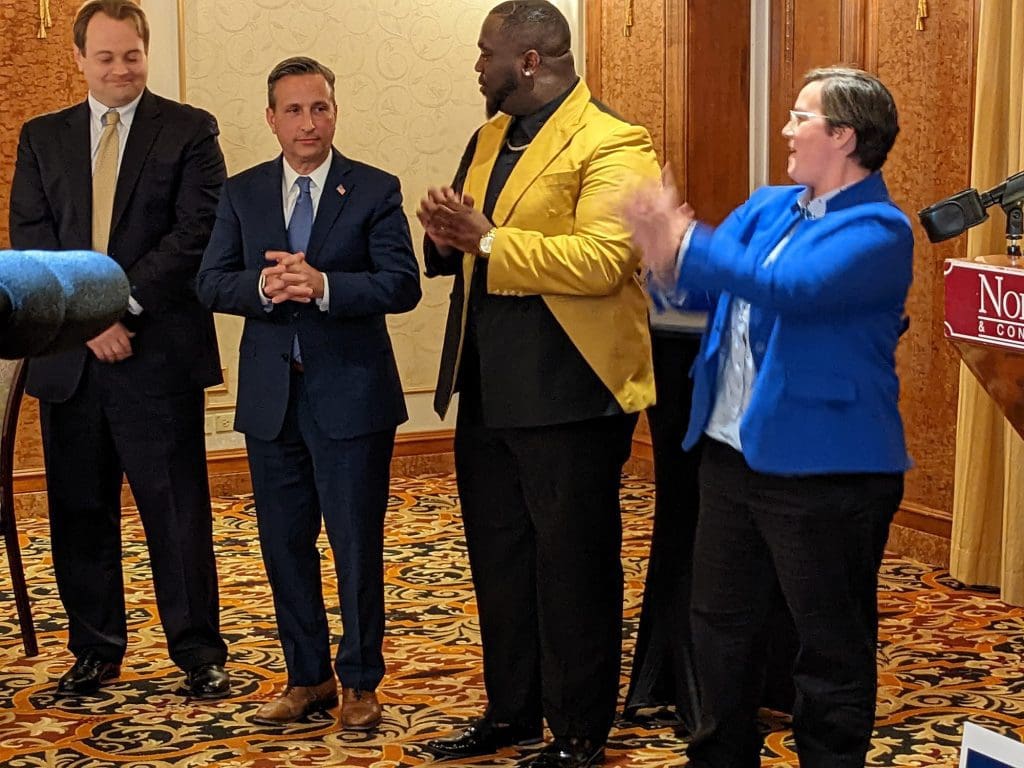 “I just can’t wait to get back to work and roll up my sleeves and, and continue to help and do the things I’ve been doing these past years,” Duff said Tuesday evening, speaking to Democrats in the Norwalk Inn.

Miressi was not at Dry Dock. At about 2 a.m., he Tweeted that he would not concede “until there is clarity on the procedures taken to ensure accurate counts.”

Miressi also Tweeted, “I dont want to hear the word ‘denier’ when the facts show there were many problems documented across CT. It’s hard to believe ppl ran to vote blue w/ oil $6/gal. We accomplished a lot, built a GOP base & are building a populist coalition in CT.” 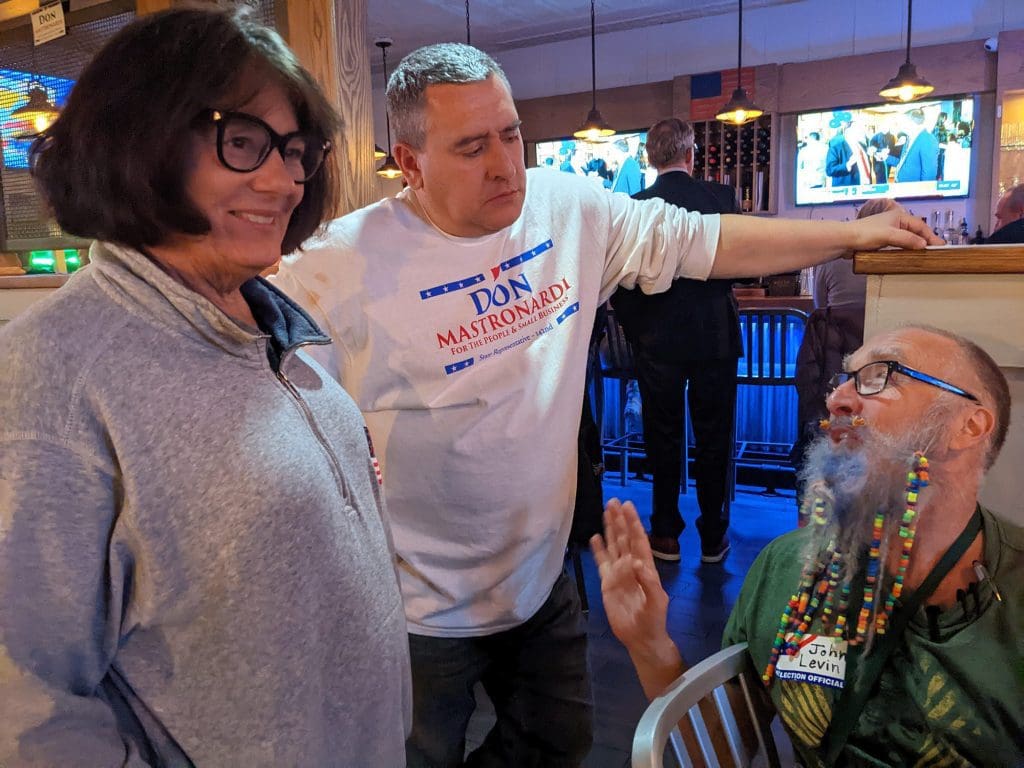 Brinton had said she didn’t think she had a chance to win but was running partly to campaign for election reform. She released a statement late in the evening:

“I’m proud of re-establishing the Independent Party in Norwalk, cross endorsing competent candidates, and helping build the line across the state.

“The results are unsurprising, and highlight why we need a third party.  The majority of Norwalk voters demonstrated their ambivalence by not turning out.

“My campaign objectives were to hold the I line for future elections, give unaffiliated and moderate voters more choice and demonstrate what centrist politics looks like.

“CT needs election reforms. Marathons are a series of small steps – and my advocacy for the small steps of early voting, open primaries, and ranked choice voting are now part of the discussion.” 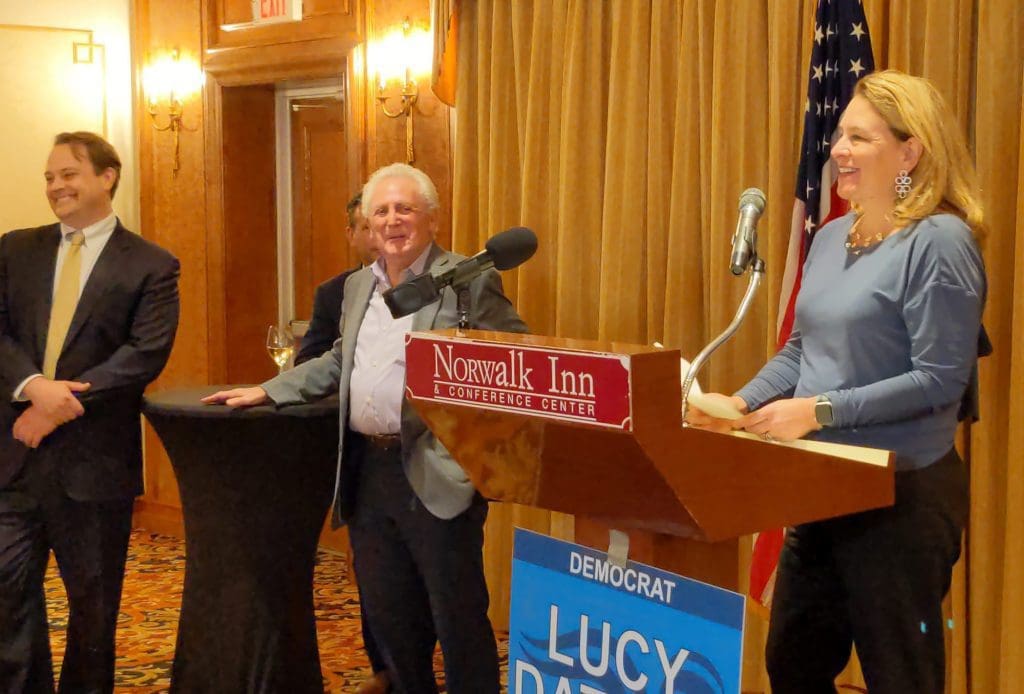 Rilling noted that Norwalk would have two freshman legislators in Hartford but, “I’ve seen both of them in action on the Common Council. And I’m confident that they are going to hit the ground running.”

Kadeem Roberts soundly defeated Luis Estrella in the heavily Democratic District 137, while Dominique Johnson topped Nicole Hampton in 143, a district that saw its lines significantly redrawn this year. Johnson will take the seat held by Stephanie Thomas for just one term; she left to become the Democratic candidate for Secretary of State.

The Secretary of State reported just 61.24% of the vote in overnight; Thomas had a commanding lead over Republican candidate Dominic Rapini and Independent candidate Cynthia Jennings.

SoS reported the District 137 race as having all results in. Roberts reportedly had nearly 64% of the vote.

Likewise, SoS said all District 143 results were in. Johnson totaled about 57% of the vote over Hampton.

Only 60% of the results were reported in the District 142 race between Dathan and Mastronardi. Dathan had about 58% of the votes tallied.

Johnson told Norwalk Democrats that going to Hartford would be “bittersweet” as she gives up her Council seat but, “Norwalk is blue…. what’s most important to me is that this purple district has now been flipped blue in a way that I hope we can continue. And what that means is that ‘Roevember’ arrived today.” 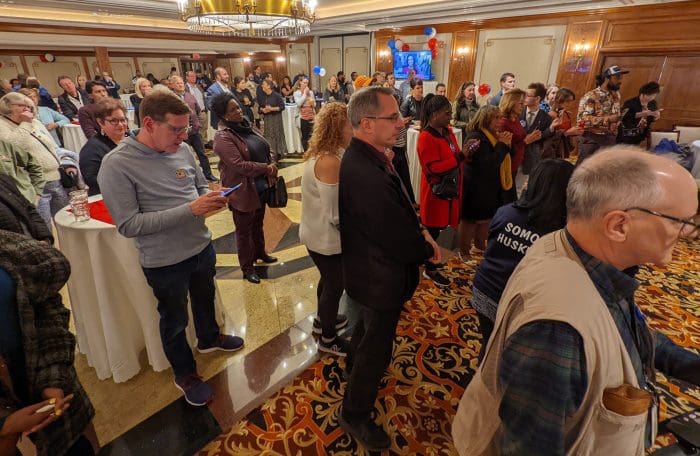 The district formerly included part of Wilton and was represented for a decade by Gail Lavielle, a Republican, before she retired in 2020. Thomas had attempted to unseat Lavielle two years before and then prevailed over Republican candidate Patrizia Zucaro.

Johnson also said Democrats would defend and strengthen gun safety legislation, and climate change is on the agenda.

Roberts agreed with gun safety as a priority and mentioned inflation and women’s rights. “But I do not want to forget the youth is very important. The legacy that we leave for them is what matters.”

Dathan said, “I have truly loved being your representative.” Democrats are a “big tent” and “we are here supporting so many things that truly make us unite together, whether it’s health care, reproductive freedoms, marriage equality, LGBTQIA rights, ending gun violence, environmental protections, really important. Educational equality, affordable housing, affordable, childcare, and most of all a fair economy. And these are the things that our team is going to be working on for the next two years.” 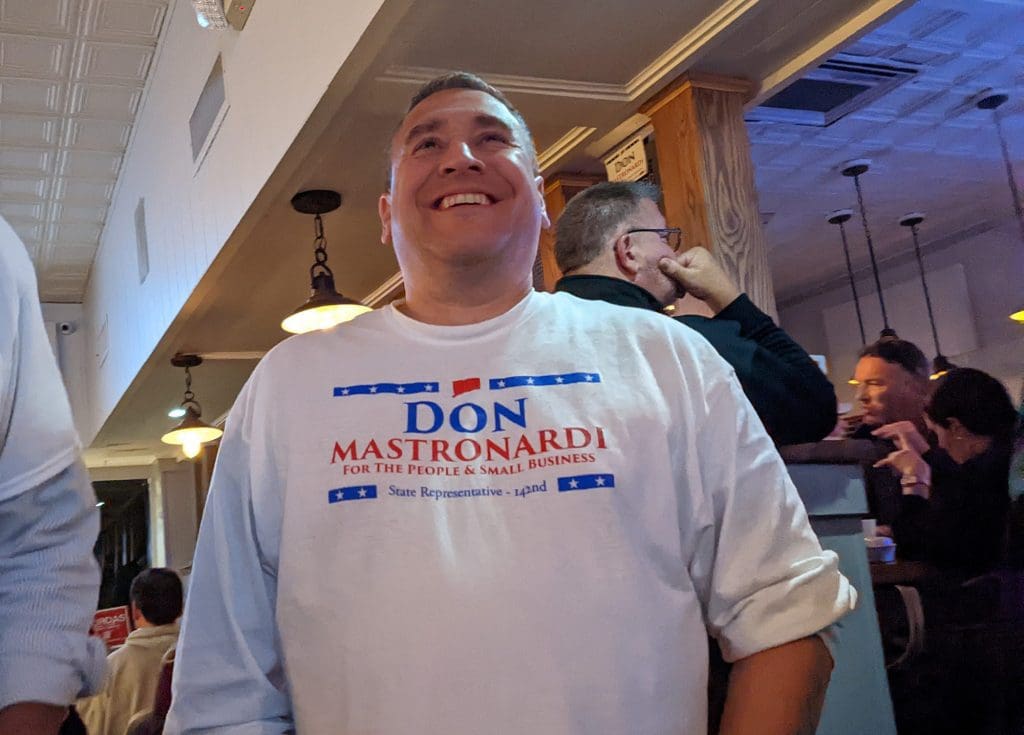 At Dry Dock, while waiting for votes to be unofficially tallied, a frustrated Mastronardi said Connecticut voters “don’t want to change. I don’t know how much suffering they can do.”

The mood in his restaurant, as big screen televisions showed state and national results, reflected an awareness that Connecticut is a blue state. No one seemed surprised that the local candidates weren’t doing well but camaraderie was evident in every gathering.

Mastronardi said he’d won New Canaan, with just over half of about 600 votes; Brinton reminded everyone that she feels the districts have been gerrymandered.

At about 10 p.m., after Johnson had celebrated victory across town, Hampton said she was waiting for Westport numbers before she would comment on the race. Absentee ballots were also an issue.

She couldn’t understand why people would vote in favor of someone who has voted to bring marijuana stores into their town and hire a DEI (Diversity, Equity and Inclusion) Officer who promotes “defund the police,” she said.

“Anything ‘Black Lives Matter’ doesn’t make any sense in our community because they do nothing for the Black community,” Hampton said. “All lives matter.”

“We want to congratulate Lucy, she ran a great race. The voters spoke and I respect that,” he said. “… I felt like we ran a good campaign, to try to run a grassroots populist message and try to let people know we’re trying to help them on taxes…. I don’t understand what people are seeing. And they keep voting for the same thing over the last 40 years.”

He teaches his kids that when you lose, you’ve lost and you need to congratulate the other team and move forward, he said. “I reject any candidates that sit there and talk about elections being stolen and fraud, I’m sick and tired of that nonsense. You lost, you lost. That’s the bottom line. I’m not conspiracy guy. And Republicans need to get away from that.”

Republicans “have a branding problem. And we need to fix that,” he said, arguing that voters agree with Republicans fiscally but “have a problem” with “the social side.” 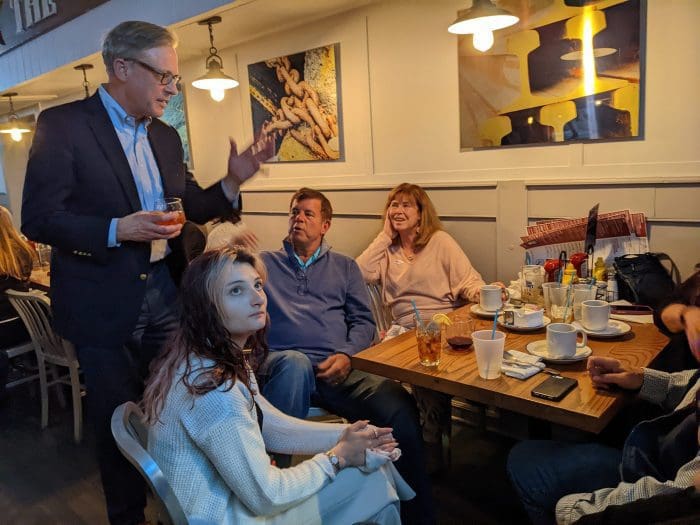 “Most analysts are saying that the Republicans are going to gain control the House of Representatives; it’s likely the Republicans get a slight majority in the Senate. And also it’s likely that they win a majority of the Governorships,” Wilms said. “Nationally, I’d say there’s a red wave, it’s moderate in nature. It’s not exceptional, but it’s moderate. And in Connecticut, unfortunately, you know, it’s much less here. We’re hoping that George Logan wins the Fifth Congressional District. The polling there was very tight. And if he does win, that would be our first federal win in 16 years, I think. So we’re hopeful there.”

Wednesday afternoon’s update with 100% of the results showing Duff with 59% of the vote. Miressa had 36% and Brinton nearly 5%.

Very disappointing the democratic mafia continues to tighten the stranglehold on Norwalk and Connecticut and other blue states promoting the killing of unborn black babies and ruining much of our American way of life but thankfully in the country there are some bright spots like Florida where people are waking up and the Hispanic God-fearing family oriented hard-working citizens are rising up to protect life liberty and freedom !🇺🇸👍🏼🙏🏼

The CT GOP went down the Trump rabbit hole and they wonder why they continue to lose in CT??? They should speak to moderates who used to vote for them, then maybe they could get a clue.

Congratulations to Bob Duff, Kadeem Roberts, Lucy Dathan, Dominique Johnson, and Travis Simms for their victories in Norwalk. Most Democrats in Norwalk and throughout Connecticut prevailed through a nerve-racking election. It takes courage and humility to run and grace to step aside when one loses.

One person, one vote defines our democracy, and yesterday I felt it was better preserved over a faction whose endless outrage doesn’t help anyone at all.

Intestinal fortitude and commitment changes things, and Democratic principles offer a clear and compelling vision for our future.

As former Texas governor Anne Richards said abut dealing with adversity, “Precious, get over it and get on with it.”

Democrats won in Norwalk and for Governor? In Connecticut?!!!!

In other news the sky is Blue

I know a person that recently purchased a property here in Norwalk. This person has absolutely no idea what’s been going on with the property tax increases, all the extra developments around the city, the education system failings, and how the city has been directed by the state DEEP to fix the sewage system because it’s overflowing into the water!

Another homeowner I know recently sold their home cause of the property tax bill.

A multi family property recently sold and tenants had to move, they were flabbergasted by the rents! Every renter I know has been given notice of rent increases up to 250-300 a month.

Do the new residents since 2020 in Norwalk vote?
Are the home owners voting?

Congratulations to CT winners.To those citizens that are wining already and say the are leaving the state, I say ” Happy Trails to you”