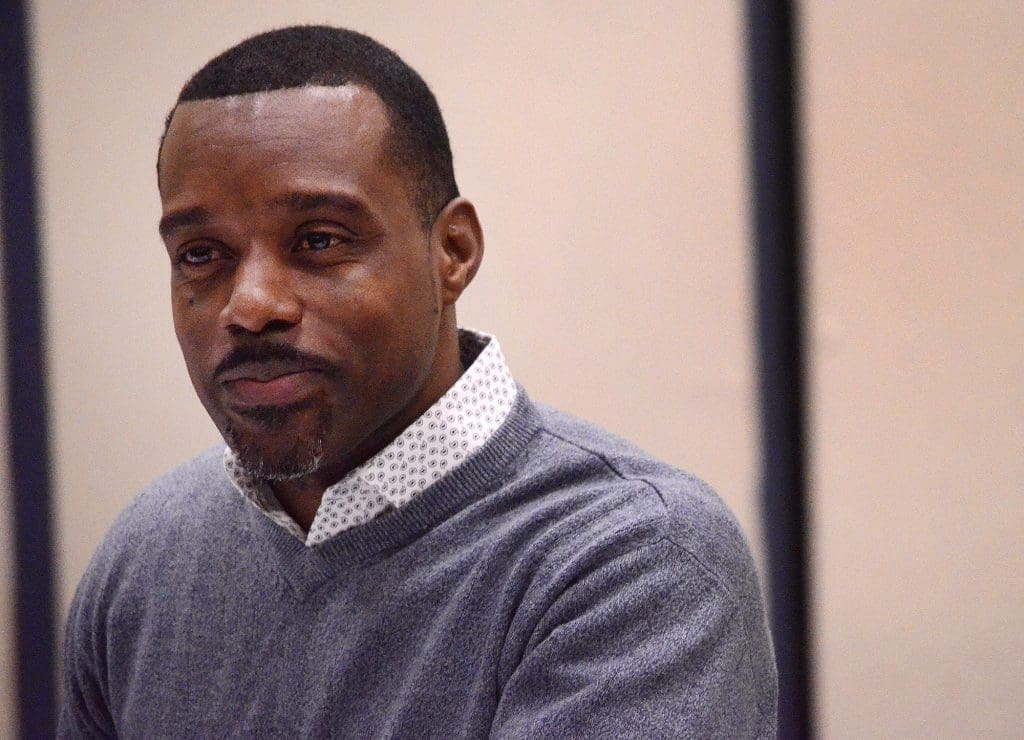 NORWALK, Conn. — Colin Hosten will replace Bruce Kimmel on the Norwalk Board of Education.

Norwalk Democrats voted 33-15 Tuesday to select Hosten over former BoE member Shirley Mosby, after Brenda Penn-Williams called Hosten a “puppet” who should have challenged Mike Barbis for reelection, and Mosby acknowledged challenges in her six-year run as a BoE member and said, “I saw this as an opportunity where we could go in and try to rectify and adjust it, especially in this time of kindness, to make sure that we can move on.”

Notable votes in the Mosby column included ones cast by Nora King and Barbis.

Hosten comes from a family of educators and is an educator himself. Kimmel resigned in late November, after serving slightly more than half of a four-year term as an At Large BoE member. Hosten had just won his first election to a two-year At Large Common Council term, after serving 10 months as Doug Stern’s replacement, after Stern won election to the Judge of Probate position. A new At Large Council member will be elected by the DTC next month.

‘Not fair’ to be called a puppet

Stephanie Thomas nominated Hosten, saying she’d gotten to know him on the 2018 campaign trail, “Just talking about how good public school education really helped shape our lives and how important it is for all children to help achieve their life chances are really good at public education.”

Mike Mushak seconded, saying, “I think that this kind of background is going serve him very well and serve the city very well in an era of extreme change in Norwalk with the new schools, and demographic changes, etc.”

Penn-Williams nominated Mosby, first commenting that the Democratic Town Committee used to feel like family but now it’s fragmented. Every time there’s a vacancy Hosten is put forward, pitting black people against each other, and making him a “puppet.”

Back in June the Democratic leaders present did nothing when Barbis, then BoE Chairman, sent an offensive email, she said, alleging that Hosten should have been nominated to represent District E on the Board of Education instead of Barbis.

Barbis, sitting alone in a row of chairs in the back, smiled.

“Now some people you may not like Shirley’s tactics or whatever, but Shirley did a great job. She did was she could on that BoE,” Penn-Williams said, calling it “not fair” that “once again,” Mosby is being turned away.

In 2018, Kimmel told the DTC that he wouldn’t run for the BoE if Mosby was on the slate, Penn-Williams alleged. “He ran, and where is he at? C’mon folks.”

NancyOnNorwalk has heard that allegation. Kimmel did not respond to an early November email asking about it.

Democratic Town Committee Vice Chairwoman Eloisa Melendez responded to Penn-Williams’ comments, pointing out that the DTC used to have 35 members but has 55 now, or 11 per district.

“I don’t think it is fair to call anyone a puppet for stepping up to run for offices, however many offices there is, people move around,” Melendez said. “… And I think that’s a good thing that we have new people involved.”

“I wouldn’t call a single person in this room of puppet because we’re all adults. You know, and I mean, I’ve known this man for years, he would he’s not going to do anything that someone told him to do,” Melendez said.

‘Maybe that was my mistake’

Hosten said he’d stepped forward for the role with the BoE going through “some fairly controversial times … at a time when we in Norwalk know this is a very crucial moment for our public schools, where we’ve gotten some great momentum going yet we have to keep it going, and we are going to lose our superintendent next year, we have to replace him…. it was not an easy decision, that this was an opportunity to where I can serve my city.”

And, “I think it’s a little unfair to call me a puppet,” he said. “… I’ve talked to many members of this body, (who) say to me ‘Colin, what are you doing, you’re ruining your political future,’ which I have to say it does not make sense to me because I don’t consider myself as having a political future. I’m not in this to, you know, to make a name for myself. So if that’s a concern people have you know, please disregard it.

Plus, “Perhaps having not having the history of the board can be a positive asset. It means that I really come in with no history no agenda, except doing the task at hand,” he said.

Mosby said her heart has always been with the children and she’s always been about the Democratic Party and even through “situations,” she hasn’t strayed. 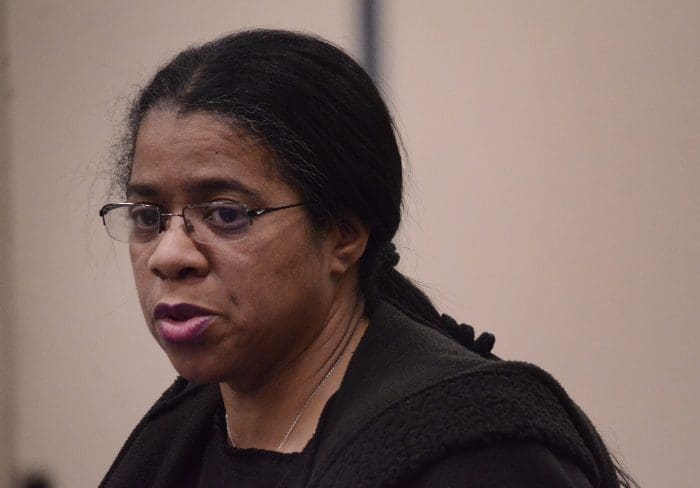 She and her fellow Board members tried to let the DTC know what they were going through but a blind eye was turned, and “we had to sit there and find the best way to try to survive on that Board for four years,” putting up with things that others could not, she said, calling it “fine” because she was there for others.

“Through this process I was told by people in leadership that my opportunity would be with the Board. And that did not happen,” she said.

Penn-Williams alleged recently that Mayor Harry Rilling had promised Mosby a seat on the Board of Education. Rilling denied that, saying that he had promised during a post-election conversation, before Kimmel resigned, to appoint her to a Board or Commission, but that he didn’t have the power to put her on the Board of Education, that’s a DTC vote.

Mosby, speaking to the DTC, said, “I have been quiet for years, trying to you know, not, you know, stir up anything, but maybe that was my mistake by keeping things in and be quiet.”
The vote

Burnett commented that he thought Hosten was needed on the Council.

Nora King, in a 2017 comment, said ‘{Migdalia} Rivas, {Rosa} Murray and Mosby were not qualified to be on the BOE. They didn’t bring about change or support what the majority of Norwalk wants. However, they did support or do anything that Bruce Morris wanted.”

Barbis made no comment about his vote Tuesday and did not reply to an email asking why he voted for Mosby.

Board member Sherelle Harris spoke to the DTC after the vote. She likes Hosten but had served with Mosby, and “because of the makeup of the prior board, which no one did anything about, even though people tried to bring it out – Shirley’s voice was not heard,” she said.

Mosby’s voice was “stifled,” and “I think with the makeup of this new board where there’s, you know, the people are independent minded. They, I think the recourse will be there, I think her voice would have been heard and there wouldn’t have been so much controversy going around,” Harris said.

‘We cannot go wrong’ with Hosten

Harris wrote to NancyOnNorwalk after the meeting, saying:

“It is always very difficult when voting among what should be family members, so tonight’s decision was tough.  Voting is deeply personal; people vote for whom they want. As stated, I will work with whoever is elected.  I just wish the process had been worked out another way.

“Colin is educated and he has experience on the council side. We cannot go wrong with him. I voted for Shirley because I think due to the pushback she received while on the board her last go-round and the contention caused by it, many of her talents were neither seen, nor heard. The current board of education seems to be one that allows for civil discourse, respecting different voices. I don’t think she had a chance to show her real talent and I believe she has grown over the past couple of years.  Some of her views of people and issues have  changed during conversations. I respect that she can change her mind without going any way the wind blows and that she is not looking to be anybody’s darling.  She is a tough one, but she has a big heart.

“Shirley has always chosen the board of education. She has never strayed from that passion. During the 2013 municipal elections she received 7,344 votes in an at-large race.  She was the second highest vote getter for the Board of education.  Norwalk spoke.  Hers was a decisive win! So what if she is not eloquent.  There are children who are not great test-takers, but they are brilliant, nonetheless.  Shirley is a product of Norwalk Public Schools.

This story was corrected at 1:48 p.m. to show that Colin Hosten replaced Doug Stern, and that Johnnie Mae Weldon voted for Shirley Mosby and Linda Langston voted for Hosten.

de·moc·ra·cy (noun) noun
a system of government by the whole population or all the eligible members of a state, typically through elected representatives.

In Norwalk – we don’t do elections – we do selections.