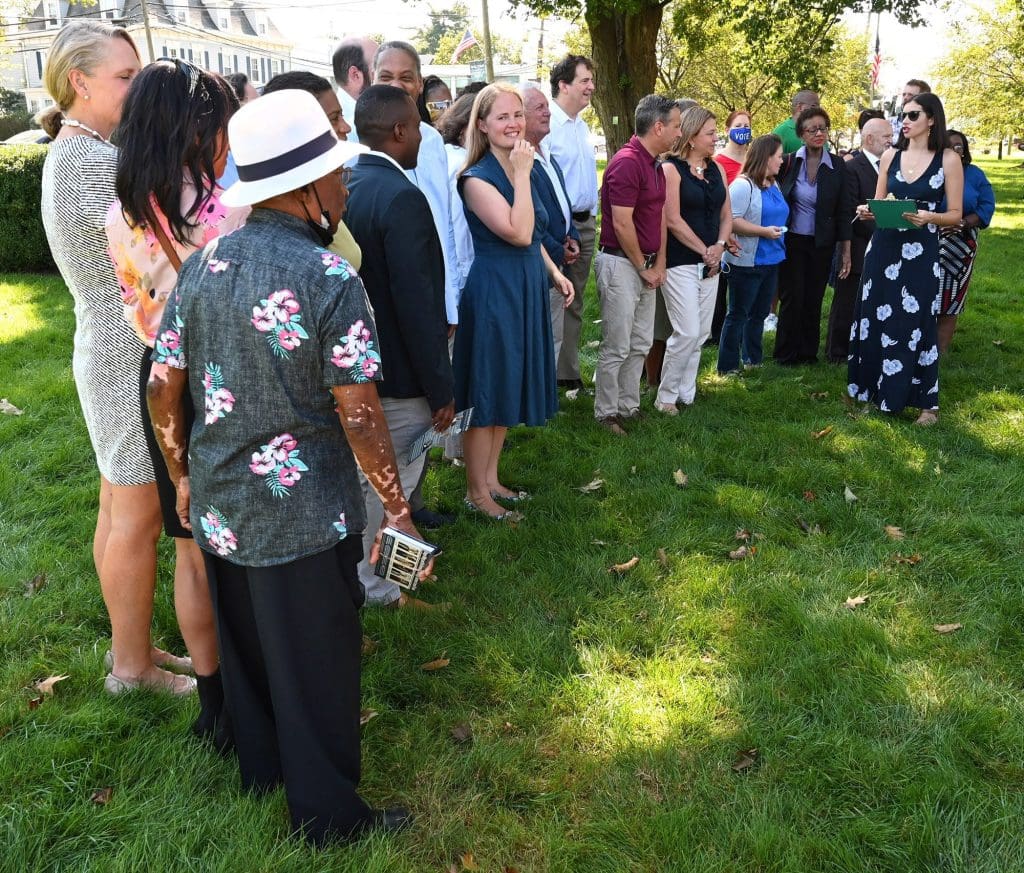 The 2021 Election is Nov. 2. A second District C Democratic primary is scheduled for Oct. 5.

Norwalk Democrats held a campaign kickoff in the Town Green, where Rilling told the assembled faithful – about 40 people – that they need to get out the vote this fall.

Video by Harold F. Cobin at end of story.

“It can’t be said enough. If we don’t get out the vote, anything can happen,” Rilling said. “When you see low voter turnout, that’s when you see a surprise.”

Rilling is being challenged by Republican candidate Jonathan Riddle.

Thank you for including part of the campaign kickoff video, Nancy. Can you kindly include the video in its entirety, so we can hear Senator Duff’s message to the audience? A DTC member who attended this kickoff has commented on social media, “As Senator Bob Duff said, these elections are often where politicians get their start. Republicans and ‘Independents’ are running radical candidates that we NEED to push back against.” In the name of transparency, I’m sure the candidates and many of your readers would like to hear for themselves what our Senator had to say on Saturday.

Hey — At the end of the video, in my opinion, I think the Mayor directed a spitting gesture in Bob Duff’s direction..Did anyone pickup on that?
When Mayor Rilling mentions what the Democratic party stands for, my first thought was Duff’s lying about the Norwalk Police Department at the height of tensions last summer. AND all those who actually believed a word he said.

My second thought was the current Board of Education and the issues surrounding the transformation of our school system into a free for all. But that’s ok, because Norwalk is rated #1 or 2 in their school category thru out CT our Politicians say — What they don’t say is that group of schools is the lowest achieving grouping in the State. Somehow they’ve forgotten to tell us that. We’re being taken as “chumps” by these politicians and it’s time to bring that to light.

My third thought was the upcoming revaluation and the surprise shock that awaits our homeowners. I’d like our candidates to address that at some point. Those Democrats from Rowayton will have some explaining to do to their constituents — My guess is it will be after the election cycle.

Most of these politicians are well meaning….They just have no clue and voters need to call them out. For goodness sakes, in my opinion our State Senator is better suiting for giving the weather rather than representing Norwalk. — Don’t give me that Bull about funding for Norwalk HS. As they say the “Devil is in the Details”. This project will hurt Norwalk financially and it won’t help our kids understand the difference between Science and Science Fiction.

Mimi, that’s the entire video. Mayor Rilling was the only person who made formal remarks.

Thanks, Nancy. Senator Matt Lesser has a photo of Senator Duff on his FB page making remarks to the crowd on Saturday.

These had long been backbones of the Norwalk Grand list. You can bet that every major retail and office owner will be standing in line to initiate a tax appeal in next year’s re-val.

Residential home owners – expect steep tax increases next year. This is what single party rule for an extended period of time gets you. But regardless Bob Duff is slandering the Independents as radicals for wanting nothing more than a seat at the table and have their voices heard.

@Michael McGuire – well said. Norwalk’s residents have many skills and talents – but municipal finance is not one of them. What ever happened to those 400 lawsuits? No reporting on those?

As for Bob – he and Harry are buddies. Bob comes to the rescue every two years for poor Harry, presumably using everything he learned from Porky Pigs Politics 101. Uh but-a uh, but-a – “you wracist wradical webble-wrousers, your talk about transparency and accountability is just scary and it promotes fear”. Did I ma-ma-mention racist? Did I ma-ma-mention spit?

There are decent people in this town who happen to align with the D party. Moderates. Then there are “Harry’s D’s” – who are quite willing to sacrifice their independent thoughts – and capitulate to the demands of one person. Bully for him. Weak mayor, strong council? Where?

Harry’s D’s currently have 24/25 elected positions in this city. Harry’s fingerprints are on almost every major hire and appointment. And it’s not enough. However, over 60% of the voting electorate identify as anything (U,I,R,G, etc.) other than D party. Who represents them?

Democracy? Or dictatorship? That is the vote November 2nd.

@Nancy, not true. The people who made lengthy remarks were the Mayor, Lucy Dathan, Stephanie Thomas, with the lengthiest being Bob Duff. None of them had anything of particular mass interest or out of left field. All were GOTV remarks, support Democrats, proud of the representative candidates, and the like.

People talk. With all due respect, Mr. Matley, Senator Duff calling Independent candidates radicals who need to be pushed back against sounds like the typical divisive propaganda he likes to peddle, not innocuous GOTV remarks. We’ve come to expect it, which is a shame, and hurtful to those of different affiliations who put themselves out there for the greater good. Look at the full out public smear campaign against the mayoral candidate in 2019 which our Senator was the ringleader of. He publicly character libeled her to a broad audience in a gasp worthy manner which was condoned with silence by some of those who you were standing alongside on Saturday, a few who intentionally misled uniformed residents by putting out mailers (I still have mine…) which stated that a vote for Unafilliated Brinton was a vote for Trump. Should they win, I really hope your newcomer candidates can do some damage control and change a large number of the public’s poor perception of today’s Norwalk Democratic Party.

@Mimi, I was there. He was referring to some hard right Republicans that had gotten elected in other towns in the state. Not Independents.

And also, to be clear, I was just noting to Nancy that there were other speeches besides the Mayor’s. All of which were typical boilerplate GOTV calls.

Thank you Justin. Your description is close to what I was told by Harold Cobin.

Rilling has ruined Norwalk. Noise is out of control. Residences are packed with illegal aliens. Entire sections of the town are almost No-Go Zones. Every other yard is a contractor yard or filled with twenty cars. Why are cars parked in lawns. Speeding is out of control on city streets, and litter is everywhere. The school system in 1980 was just behind Fairfield, and yes it was a minority filled district even then. Now we compare ourselves to the poorest districts in the state and pat ourselves on the back. The walkbridge fiasco will cost this city for generations, and Liberal mayor destroyed an Ancient Native American Fort to build it. Over Development and Building in the town have destroyed the infrastructure, even the water taste worse. Their are gangs of teenagers running wild. Listen to the police call in sometime. Corruption between Public Unions, Developers, and theMayor have lined his pockets and impoverished the residents. Only illegal aliens should support Rilling that’s the only people soon to be left in the town.