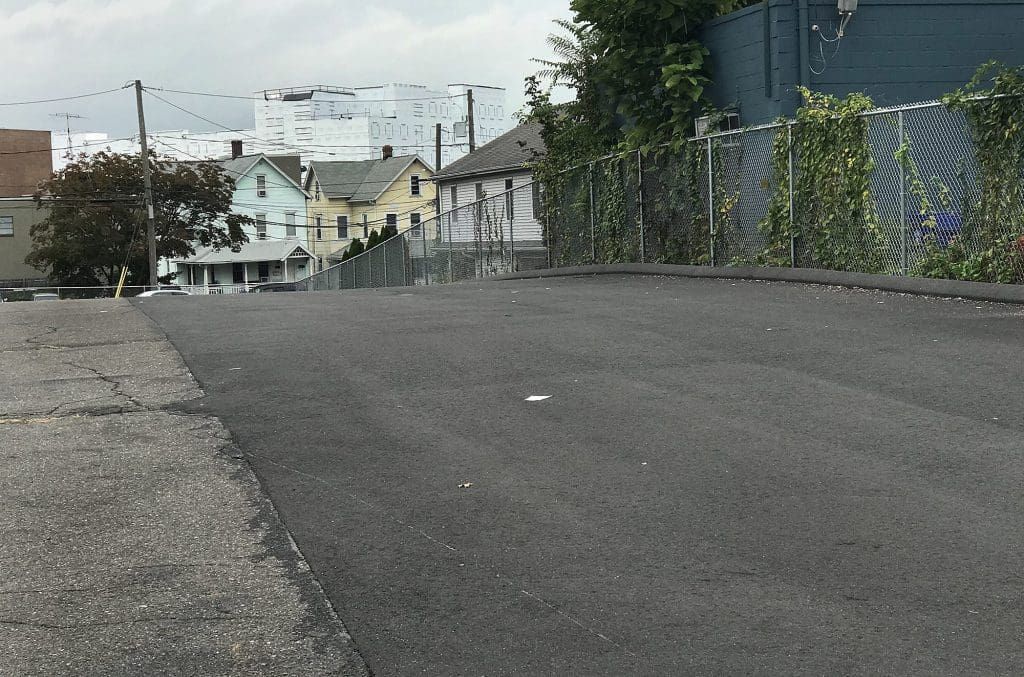 Wall Street Place, on the horizon over the St. Mary’s Church parking lot.

NORWALK, Conn. – The battle between Citibank and Norwalk over the derelict state of “POKO Phase I” is heading for mediation, and Citibank has been advocating a larger project than originally designed, according to correspondence obtained by NancyOnNorwalk.

A June 1 letter from city officials to Citibank declared the company in default of its agreement because it has missed its deadlines to complete Wall Street Place, a redevelopment project on the former Isaac Street municipal lot planned to include 101 apartments. The company subsequently asked for a 180-day extension, which was refused on Oct. 2. Both parties are advancing the mediation process, Norwalk Communications Manager Joshua Morgan said Thursday.

Citibank has evidenced little attention or investment in restarting construction on Wall Street Place despite initial assurances when “the project as underwritten financially collapsed,” Redevelopment Agency Executive Director Tim Sheehan and Corporation Counsel Mario Coppola wrote to Citibank on Aug. 6.  The letter went on to explain that Citibank is instead seeking to build a larger, more complex project using “Phase II” properties, which it doesn’t own.

Citibank and its preferred developer, JHM Group, and the Richman Group, a rental apartment owner that works with JHM, have been pushing a larger strategy for the development of Phases I and II of the Wall Street Place Project, the letter states.

“However, that effort has been ongoing since March of 2017, but to date has not realized an implementable plan. Further, the terms put forward by the Owner relating to additional financial commitments on the part of the City to advance said development are unacceptable to the Public Parties,” Sheehan and Coppola wrote.

“Meanwhile, the existing structure on the Phase I property remains only partially constructed and has been left to become a significant source of blight on the Wall Street commercial area and a public health and safety concern for the City,” they wrote. “The Public Parties have made the Owner aware of these serious issues of concern at various times during the past year. Unfortunately, the Owner has never provided the Public Parties with a definite plan for resolving these issues of concern nor demonstrated that it is currently taking any action. The JHM Group indicated on a conference call on July 31, 2018 that such proactive action to ‘enclose’ the building would ‘never’ be advanced by the Owner prior to there being an approved development plan, seemingly the one currently favored by the Owner.”

Construction on Wall Street Place stopped in 2016 after POKO Partners principal Ken Olson fell gravely ill and Citibank, issuer of the $31,880,000 construction loan, identified a budget gap, putting the project into default and stopping the pipeline of money.

That gap was $9,853,181, Citibank’s August 2016 default letter to IWSR Owners LLC, a POKO entity, states. Citibank has since taken ownership through a deed-in-lieu transfer, a friendly foreclosure on the construction loan, under Municipal Holdings LLC.

Norwalk on Sept. 18 issued a notice of blight on the property, which gave Citibank/ Municipal Holdings LLC until Oct. 18 to address mold, rot and other issues or face a $100 a day fine.

The Aug. 6 letter demanded “certain information and documentation” within 30 days, including a plan for Phase I that involved only Phase I properties, with a project timeline and no request for no additional city funding, in order to get the 180-day extension. Citibank was also told that it must present a plan to complete the construction of the windows and the façade before inclement weather starts.

That information was not provided, the Oct. 2 letter states, explaining that the 180-day extension was therefore denied and the public parties were requesting mediation before the American Arbitration Association.

Citibank has responded to that request, Assistant to the Mayor Laoise King said Thursday evening, and “We are in the process of finalizing our selection of a mediator, once that is agreed upon a date will be set.”

The City of Norwalk is very careful to follow the default process outlined in the LDA when dealing with Citibank.

Not so much with Rich Olson.

It would be hilarious if it weren’t so SAD!

Rich Olson’s default is easily cured but the City has yet to even issue a “Notice of Default”
Easily cured because it is only related to how a transfer was made.
Transfers are not the problem. These properties and the loans involved have been transferred time and time again. Phase I was foreclosed upon!

Besides the “unauthorized transfer” my property is clean as a whistle and 100% in compliance with the LDA. Most importantly there are 137 public parking spaces available!

How many are available on Phase I? ZERO!! There are supposed to be 100 even during construction.

It appears that this city is only interested in success when they can cut a ribbon or otherwise take credit.

Why has the city left broken fire hydrants in the area some with bags over them?

I don.t see the city working at all in the area leaving dangerous liable objects protruding from the sidewalks. They are widow makers.

The city needs to clean up their act , its obvious they they ar not protecting the public just their own department head pockets.

Ir it time for the fire dept to come out and defend themselves? Its sad what you can see when taking a walk thru, most of it cant be seen by sitting in a office chair.

What about the Y its worst than anything else in the city next to the tinder boxes the city has already let be built.

I decided to go outside my comfort zone and take pictures in the area shame on the city while others works so hard to try and maintain whats left of a nice city.

Tim and Mario you must be liable for the things that appear to be dangerous not addressed. Jack of all trades master of none.

Too bad Mike can’t help with enforcement that picture of Trump seems to be a blight issue.

“Citibank has evidenced little attention or investment in restarting construction on Wall Street Place despite initial assurances when “the project as underwritten financially collapsed,” Redevelopment Agency Executive Director Tim Sheehan and Corporation Counsel Mario Coppola wrote to Citibank on Aug. 6. The letter went on to explain that Citibank is instead seeking to build a larger, more complex project using “Phase II” properties, which it doesn’t own.”

What a flippin’ nightmare… A larger, more complex project.
I dread to know what this larger, more complex project will be. After all the (much ignored by City Hall) back and forth and on target feedback on what “should be” in the Wall Street Area, we all know we are going to get more of the same out of place, uninspired, disproportionate, characterless apartment developments which will swallow up any footprints for storefronts and economic commerce which should exist in a so called Innovation District. Nobody in City Hall with the power to weigh in seems to be concerned about this impending scenario.

Tim Sheehan and Mario Coppola… devouring the heart and soul of Norwalk with their lack of big picture vision, one giant fortress building at a time. Can we get a qualified City Economic Development Director on board here to save us from impending doom?