Detail of a map prepared by the Norwalk Department of Public Works to show flooding conditions created by Tropical Storm Ida (indicated by red balloons). Outlined in blue is the New Canaan Avenue/Ponus Avenue drainage study area and in red is the Dreamy Hollow/Betts Brook drainage study area. Improvements for Dreamy Hollow are expected to begin late this fall while the Ponus work is expected late next year. 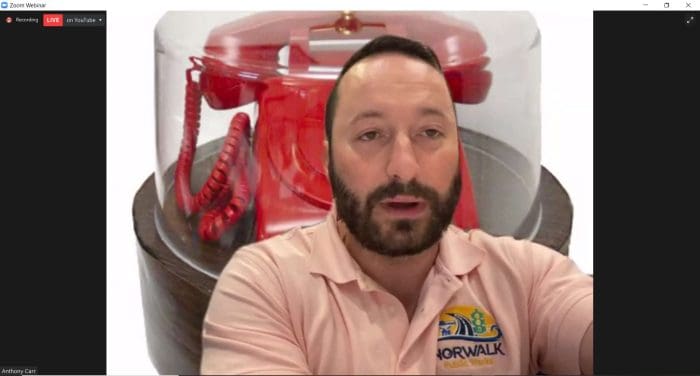 It was “pretty intense… a lot worse than Elsa” and resulted in flooding complaints inundating City Hall, but dealing with the vulnerabilities will take time and money, Carr told Council members Tuesday, pointing out that Norwalk did better than nearby areas and attributing this to improved infrastructure here.

“We feel extremely terrible for the residents,” Carr said. “Some of us personally are going through some flooding issues at our homes. It’s not fun. And it definitely puts a damper on things, no pun intended at all, for a few weeks of your life, until you can fix things and get things in order. It creates stress.”

The total rainfall was 7.5 inches in about 19 hours, Carr said. That equates to 15% of Norwalk’s average yearly total; the stats from the National Oceanic and Atmospheric Administration (NOAA) show 6.74 inches fell in six hours and “if you use all the fancy NOAA graphs and the engineering, equates to … a 500-year storm event.”

DPW has created a map showing where the problems were, based on resident complaints and staff observations, Carr said. A News12 report over the weekend identified Iris Court, off Flax Hill Road and adjacent to Keeler Brook, as a hot spot but incorrectly suggested that the Rowayton Avenue bridge failure might be a reason, he continued.

Materials were removed from the bridge supports by Tropical Storm Elsa in July and the waterway is unimpeded, Carr said. An obstruction was reported Tuesday morning but staff immediately cleared it and “there was nothing in there from the bridge or remnants that would, that would cause that backup” last week.

“I think everybody in that area appreciates all the work that Public Works has done and is doing and they realize, you know, that this was just an extraordinary event,” Keegan said, thanking Carr and his team.

DPW is using its map and collecting data, “But we know it’s important to know that this was an unprecedented act of nature, regardless of the science, the climate change, or if it’s just the Earth’s natural weather patterns changing, because that does happen over time,” Carr said.

DPW will arrange a special storm collection for bulky waste and study possible drainage improvements, he said, cautioning that drainage work is very expensive and only so much can be done.

Work is already slated for the Dreamy Hollow/Betts Brook area, and that’s likely to cost $3-4 million, Carr said. The study area was 400 acres or 3% of Norwalk’s landmass, so “that means for every 1% of land mass improved, is about $1 million of capital money for drainage improvements. So that’s the reality … it’s very expensive, especially the prevailing wage rates, and especially with material prices going up.”

He used examples from Mamaroneck, N.Y., where he lives and served as village engineer from nearly two years, to illustrate the difficulties: the village had about $55 million in federal funding lined up for a $86 million drainage project but it was yanked by then-President Donald Trump and has yet to be reinstated, he said. But, “you almost can’t do eight areas at one time” because it adds up to $50-60 million and “it just doesn’t work that way.”

Principal Engineer Vanessa Valadares said that while “we cannot spend all that much money to improve the drainage” there are other things being done that help.

The new drainage manual requires anyone seeking to renovate or build new construction to hold water on the property, she said. They have to do a drainage study and then basically build a “small pool underground” to keep water from going to the street.

“This is definitely a long-term way of improving drainage and flooding,” Valadares said. “Another thing that we do that is more on operations, we are cleaning all the time, all the pipes.”

In the sedimentation control project, “it took us over a year to get a permit and we clean some of the main channels to get the water flow better,” she said. “I know that a lot of people in those areas is still got flooded. One thing that is important for them to understand is that if we haven’t done the cleanup, the flooding would have been much, much worse. So we’re trying to do things that is not as expensive as ‘millions of dollar strategy’ on a daily basis to improve the flooding throughout the city.”

“These last few storms have just been an anomaly,” and, “I’ve been doing drainage modeling reports, reviewing other’s work for about 20 years, and I’ve never seen it this bad,” he said. “Typical municipal storm sewers are designed for the 10- to 25-year storm events. So, a 10-year storm has a 10% chance of occurring in one year and a 25-year storm has a 4% chance of occurring in a year. So, you can make the pipes bigger. But to be honest with you … it’s unfortunately nowhere for the water to go. Our infrastructure comparatively held up very well to some surrounding areas like Stamford. Definitely better than White Plains. Definitely better than the village of Mamaroneck. So, you know, kudos for the people in the past who designed more for the future.”

Norwalk suffered no major infrastructure failures and the six wastewater treatment plant pumps were on for six hours, more than anyone remembers them doing, Carr said.

“It’s just so much displacement of water,” Carr said. “…I’ve seen arguments that it’s over development, I’ve seen that it’s zoning, I’ve seen that it’s the city storm sewer. It’s unfortunately an act of God, that’s not necessarily a nice one. So we are working on it, the best we could do is learn from it… Sometimes selling the property or lifting up the house is going to be a quicker, less expensive solution for that rather than waiting 5-10 years for the municipality to get there and make the improvement if that happens.”

“Unfortunately, nowadays with the kind of storms that we are getting, sometimes it’s worth to get flood insurance, even if you’re not in a flooding area anymore,” Valadares said. “I know it’s not anything that people want to hear, it’s not something that people want to spend more money on. But that with the type of storms that we’re getting recently, and probably will continue being like that, sometimes it’s worth that you have some flood insurance on your property and then at least you have some relief from the expenses that you deal with.”

Article updated at 2:24 p.m. to include DPW map; photo added.

Wow, it only took 14 years since we had that 11 inches that summer of 07. Less flooding in the city as I recall too.

Just try to make a claim in a state that does its best to protect the interests of insurance companies!
Mention flood…not covered.
Mention attorney…click.
Mention water damage…sorry. It was a flood.