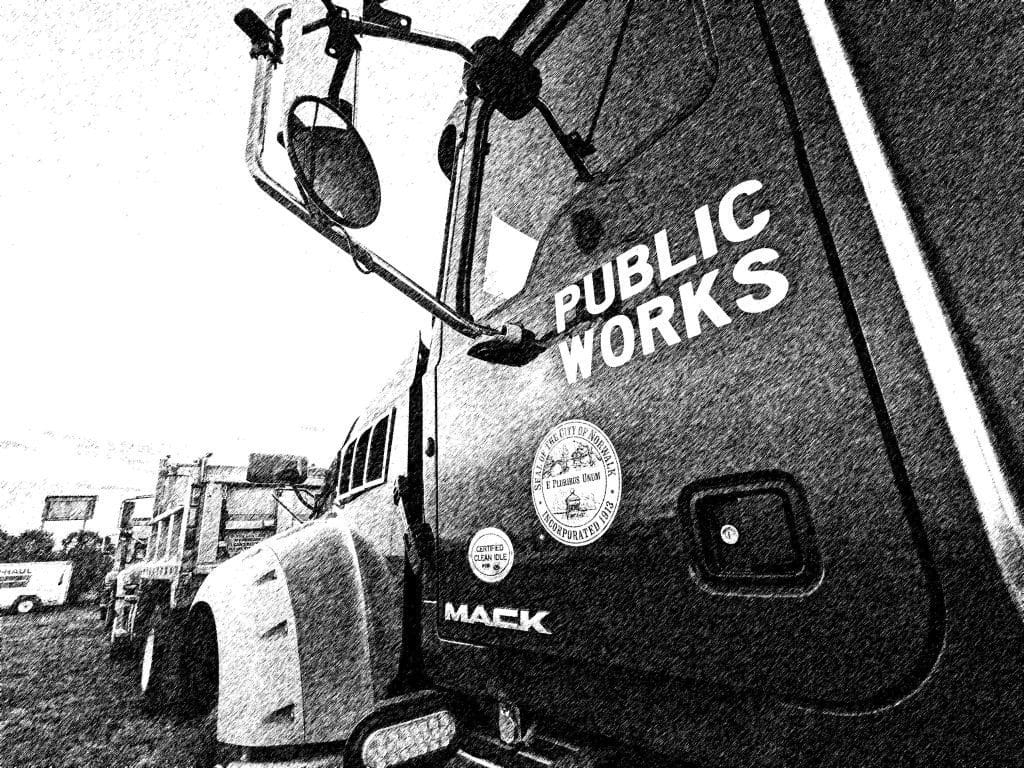 “All this work that we’re able to perform is a direct result of the budget that we’re given out there,” Civil Engineer Daniel Stanton said to the Common Council Public Works Committee.

Drainage work included 47 new catch basins, compared to 17 in 2021, according to Senior Civil Engineer Paul Sotnik. That’s not just replacing existing aged infrastructure, that’s identifying chronic puddling in areas where the roads are being repaved and adding drainage to eliminate “what we call a birdbath on the street.”

DPW’s stats for paving this year include work done by Dec. 7:

The tonnage decreased because “even though it was more streets done, some of the streets might have been a little smaller,” Sotnik said.

Council member Nora Niedzielski-Eichner (D-At Large) noted that “scope of work remaining” means the good weather moved on before DPW completed its plans. Sotnik agreed that the work will be done when the weather improves.

2021 total forecast to be completed

2022 total forecast to be completed

“We were able to get more work done,” Sotnik said.

“It just so happens that the roads that we intend to pave now have a lot more sidewalk work in need of repair,” Senior Civil Engineer Drew Berndlmaier said. DPW doesn’t want to pave the area and “leave zero reveal on the curbs,” ensuring drainage issues.

“We’ve postponed these streets because of the higher expense up to this point,” Berndlmaier said. “And now and now we’re at a point where we have to do something in some of these neighborhoods, like the Ohio neighborhood.”

Sidewalks and pavement were improved on 13 roads off Main Street, in a three-year project in the Center-Ohio, Plymouth Avenue neighborhood, Chief of Operations and Public Works Vanessa Valadares said Dec. 12.

“We couldn’t really pave those streets until we until we fixed the drainage and the sidewalks first,” Berndlmaier said Tuesday.

Sotnik said two contractors are working on pavement projects, “trying to keep up with all of this work rather than just going with one contract like we had done in previous years.”

“We actually did a lot of footpaths this year,” he said, referring to bituminous paths, not concrete sidewalks.

Paths were widened on Fillow Street and connectivity was added to Soundview Avenue, he said. In the spring footpath work will be done along Flax Hill Road, from Darien to Highland Avenue, and improvements are planned on Richards Avenue.

“This is not the big drainage projects,” Sotnik said. “It is the work that’s in preparation, once again, for paving prior to the paving work being done.”

DPW sends cameras down the city’s systems and sometimes finds “corrugated metal pipe that is completely corroded,” Berndlmaier said. If it weren’t repaired a sinkhole could develop in a new road.

Meek asked if DPW coordinates with the Water Pollution Control Authority, which is repairing many sewer lines.

DPW talks with Norwalk Senior Engineer Ralph Kolb and WPCA every day, Sotnik said. Storm drainage can’t be funded by the WPCA and “obviously,” Kolb tries to get the sewer line work done before paving. The bodies coordinate their efforts.

Niedzielski-Eichner said the City is trying to separate sewer lines from storm drainage and asked if any of the projects had accomplished that.

The Ohio/Plymouth project accomplished “significant separation,” Berndlmaier said. The more extensive work on the Dreamy Hollow area, one of the City’s major drainage projects, includes “a lot of sanitary sewer improvements that we’re making in conjunction with the drainage improvements,” appropriately funded by WPCA for sewers and the City for stormwater lines.

Encroachment permits are for general work in the right of way, such as a property owner having a sewer line installed, Sotnik explained. Driveway permits are for driveways.

Plan reviews are DPW engineers commenting on plans submitted by the developers or property owners, as to whether they can be approved.

Why are more received than approved?

“There’s a variety of different things,” Sotnik said. “In some cases, they had to go back and get redone. Sometimes the developers decided to withdraw them, and some of them are still being worked on.”

DPW’s stats for trees planted through its budget:

Shanahan called that a “great trend” but asked for “metrics of destruction.”

“I’m curious about the trees that are gone missing, you know, the ones that we’re losing,” she said.

Those weren’t included in the prepared “metrics.”

Norwalk Tree Warden Chris Torre later said he didn’t have exact numbers but “I can tell you with 100% certainty that we planted more than we removed. The reason why I don’t have that numbers because we had the the windstorm at the end of November. And we had the wind and two days before Christmas.”

In July, the Common Council approved a two-year “on call” agreement with Almstead Tree & Shrub Care Company LLC and Minutemen Land Services, LLC for the supply and planting of trees and shrubs, specifying up to $700,000 on “task orders” between the two companies. This was funded through ARPA dollars, which need to be spent by 2024.

DPW was able to stretch its tree dollars a little further plus there was ARPA funding and another grant, Sotnik said.

The sidewalk out in front of C-town still looks like crap. S Main could use a half-dozen more crosswalks too, and it’s littered with potholes. Elizabeth is crinkled like a potato chip at Day St.

This is a win for Norwalk? For whom? Follow the money. Last March 21st, on the crumbling sidewalk in front of the failing West Rocks middle school (near the successful “private” institution Winston Prep school) that Lamont, Himes, Duff, Rilling, Estrella, Reynolds, all stood for their “photo-op” – touting a 1.4 million dollar grant to fix – remains a joke. BIG talk – zero action.

When will we revolt? I mean – pitch-forks, burning torches, the works?

CT is so ridiculously overcharged & taxed for the services we receive it’s an abomination. Nothing is more poorly managed or delivers less value for the cost than government delivered services. NOTHING.

When Bob Duff was asked at his one and only debate to explain why it cost 3x more for the state to build housing than the private sector – his answer was – “NO”. The only thing we don’t know (but could guess) – is either Bob didn’t know the answer, or was deathly afraid to tell us the truth.

Case in point: the DMV. Can any rational human explain why that State department – in January of 2023 – is open by appointment only? Why – when you call you wait on hold for over an hour? Why – when you are actually inside the building – it takes hours to accomplish the simplest of tasks? Never mind these public sector union folks are paid exorbitant wages (for the job) and ridiculous benefits and pensions – all by the very taxpayers they fail.

WHY do we tolerate this?

The public should begin to demand that we privatize virtually every single government service- including our failing public education. When is enough – enough?

There’s lots of things you can do with money, but remember where it came from it’s the peoples money🥵💪🏼🇺🇸🦬

Patrick’s rhetoric is a large part of why we have bad public services. When an entire half of our political system decides that every service is worthless and must be burnt down, we shouldn’t get all shocked that the resulting services get even WORSE. Of course they got worse, you just spent the last several decades trying to “starve the beast”!

Patrick can’t have his cake and eat it too. It takes money to make systems efficient. Look no further than Southwest Airlines – the entire reason for their recent shitshow was that their CEO is a penny-pinching accountant who refused to update their obsolete computer systems. This isn’t just a public-vs-private problem; Southwest shows that the private sector is perfectly capable of screwing up all on their own, too.

No, it’s “penny-wise vs. pound-foolish”. And we’ll never get the efficiency Patrick says he wants by indulging his rhetoric.

I hate to sound like a broken record, but this ultimately isn’t even Patrick’s fault. Our electoral system is so accursedly zero-sum, it forces these crappy politicians on us by *default*. If we ever want our bureaucracy to be efficient and accountable, we can do it one of two ways: (1) slow and painstaking, like our current system, or (2) faster and with less acrimoney, like we’d get from having Ranked Choice and open primaries.

@David. Big difference is that SW is being held accountable. Not by the failed regulatory arm of our government, but by the markets. And I highly doubt you hate to sound like a broken record, so I’ll go on like one in the sprit of the conversation.

Money is not in short supply when it comes to government, but accountability and results are. For example, DMVs $30 million in system upgrades and many of the handful of transactions they manage still can not be done on line and require an appointment. Compare that to Amazon which went live on a $10 million investment that can ship anything to your doorstep from across the planet in 2 days. By your logic we should just shut up and give DMV more money.

@Bryan, you should know well enough that Amazon didn’t do “ship anything to your doorstep from across the planet in 2 days” on that initial 10 million. They’ve had billions, if not trillions, of investor cash dumped into them for 2 straight decades to get them to this point.

@David. I know full well they were only selling books at that time, and still they handled infinitely more orders and customers than DMV which used to be open 35 hours a week and is now only open by appointment that you have to wait hours on the phone to get.