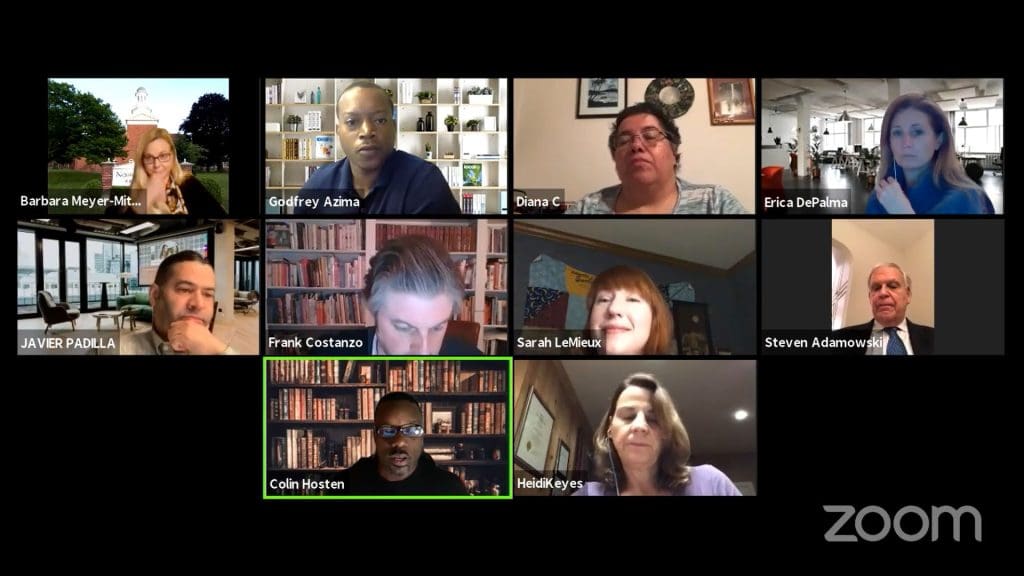 The Norwalk Board of Education’s June 14 meeting on Zoom.

NORWALK, Conn. — Some Norwalk education notes for you.

July 6 is just a week away and it looks like Norwalk Public Schools is moving forward with its summer school plan, as announced recently, before Mayor Harry Rilling objected.

“As far as I know, we’re moving forward with an in-person option for the families that choose to do that. And we have distancing options for the everybody else,” Board of Education Chairwoman Sarah LeMieux said Thursday.

Rilling objected May 29 when NPS announced the summer school, saying he was “shocked” to see summer school plans that went against the recommendations of the Norwalk Health Department and medical adviser to NPS.

LeMieux said that everyone agreed at the end of their recent meeting that if the COVID-19 numbers look good, the summer school would go forward. A Friday newsletter from NPS Communications Director Brenda Wilcox Williams mentioned that summer school is beginning July 6.

The five-week long Summer Academy is for K-8 students scoring at the 25th percentile and below in literacy, the NPS email blast said on May 29. Parents can choose an entirely virtual experience or opt in to in-person learning, with a teacher to student ratio of 10:1 per classroom. There’s also a hybrid model for fourth through eighth graders, alternating weeks of in-person learning with weeks of virtual classes.

High school students are eligible for summer learning if they’ve scored an “incomplete.” This could also be done in-person or virtually

LeMieux said Thursday that NPS hadn’t gotten the actual documents outlining the guidelines, but based on the PowerPoint presentation her main concern was that urban school districts like Norwalk and Stamford would have to “probably proceed differently or a little more conservatively with regard to social distancing.”
Details should be out Monday, she said. There’s a big difference between Norwalk and places like Canton, that have fewer people.

“I have been very reassured about the ways that we went about coming up with the summer school plan,” working with the City and benefitting from Estrella’s experience in New York City, LeMieux said. “I feel like a hybrid model or a model where, you know, kids are coming to school in smaller cohorts and coming physically to school on alternate days or something like that actually would work really well for us given that we do have a bit of a space crunch in some of our grades.”

The space crunch is variable with age groups but obviously Norwalk has a more difficult time with social distancing that other districts, she said. “As a parent also I take so unbelievably seriously the safety of everybody’s kids.”

It’s been five years since consultants completed their 10-year facilities plan for Norwalk Public Schools and the City would like to analyze current elementary school capacities, Building and Facilities Manager Alan Lo said last week to the Board of Education Facilities Committee.

The Committee “gave its blessing” to Lo’s desire to use in-house staff to do a two- or three-week review of elementary capacity, with a group that would include one BoE member and one Common Council member. Because there’s no money being expended, the Committee didn’t really need to “approve” the move, he said.

Lo allowed that this is connected to the construction of a new Columbus Magnet School, as the City needs to acquire land and he’d like to be confident in knowing how much land is needed.

The plan to build a new school behind the Nathaniel Ely preschool center has been held up because the City needs State and federal approval of the proposed land swap. The plan involves using part of Springwood Ely Park and by law the City needs to provide an equal amount of open space elsewhere. The State objected to the open space being in West Norwalk.

Board member Barbara Meyer-Mitchell pushed for the new analysis to include middle and high school building. While NPS Chief Financial Officer Thomas Hamilton agreed with her that this is necessary, Lo said this two-three week in-house study was the first step.

“It’s really just like we need to know truly, what capacity all the buildings are. So that so that the Board of Ed can do the planning,” Lo said.

In a move that didn’t draw attention, the Board of Education on June 16 declined to extend its security guard contract for three years, instead authorizing just a one-year extension.

Meyer-Mitchell said this was so the Board could review its labor practices and decide if this was how it wanted to move forward.

Security guards are outsourced. The vote was unanimous.

Board member Sherelle Harris agreed that the Board basically wanted to review its labor practices.

The issue “opened a whole discussion that was much, much needed and will lead to some good discussion and hopefully our stakeholders will be pleased with the outcome,” Meyer-Mitchell said. “I think we need to engage the community in this conversation.”

Norwalk is so backwards. Our neighboring towns are all open this summer for sports clinics and summer camps. In fact, they are thriving.
Meanwhile, we remain without camps and sports.
And people actually wonder why our neighbor’s perform better in school and kick our tails on the athletic fields.

Thankfully the state is deciding and not our city officials or local elected politicians. Sarah’s comments are concerning. It is time to open the schools and it is time that taxpayers and parents take control. The majority of parents clearly demonstrated in the polls they want schools open. Distance Learning was the worst.

Excellent points Nora.
Everything school related should be open right now in my opinion.
With more distance learning the gap will only widen.

@Norwalk Parent. Our Mayor won’t even allow us to use the playgrounds we pay to maintain and the fields are in terrible shape. Darien opened playgrounds almost 2 weeks ago now. Don’t worry, they all got raises today.