NORWALK, Conn. – More than 7,000 Norwalkers have voted in this rolling election.

Two intended votes apparently didn’t make it: there are reports of ballots being stolen from two personal mailboxes. And, in a yearly ritual, there are a few complaints about stolen political signs.

Two days ago, it was reported that 4,980 ballots had been returned so the Town Clerk’s Office processed 2,644 ballots Tuesday and Wednesday.

There were reports on social media of ballots being stolen from a mailbox in Silvermine on Friday. Lt. Jared Zwickler said Tuesday that two reports had been filed and the investigation was turned over to the Postal Inspection Service. The Postal Inspectors media office did not respond to multiple emails asking for information.

Chief Thomas Kulhawik said this was”obviously a lack of communication as well as circumstances out of our control.”

“We were unaware of the incident and I advised I would be checking upon my return,” Kulhawik wrote Thursday. “On Tuesday we researched things and determined that in fact there were two incidents and we asked the Detectives that although the Postal Inspector had indicated they would be following up, to please verify that and see what they could find out as well.”

These were completed ballots inserted into postage paid envelopes that residents put in their mailboxes for pickup by the mail service employee delivering mail to the neighborhood Friday. According to social media, a surveillance camera may have recorded images of a car involved in the thefts.

Dickens said Wednesday that he’d just heard about it and understood that there’s video. He didn’t know whether just the ballots had been taken or if everything that was in the box was taken.

That’s the problem nowadays, he said, “As soon as you put that little red flag up on the box that’s in invitation to people that you’ve got something in there … and we do have unscrupulous people who like to take things that don’t belong to them.”

He said, “I don’t believe that there’s a concerted effort out there for either party to go around and steal absentee ballots out of people’s mailboxes.”

“I’m personally not scared of any real attempt” of city-wide thefts or plan for voter fraud, she said. The Democratic Party is encouraging voters to take their absentee ballots to the City’s drop boxes. “We know that that’s not always an option for everyone… But if it’s possible, to really use the ballot boxes to avoid any possible situation, either a delay in the post office or any other possible scenario.”

Dickens also recommended that voters use the dropboxes. He also thought the ballots could be taken to the customer service desk.

“I wouldn’t mail them, for a number of reasons,” he said. But he’s not voting absentee anyway. He promised to be at his polling place on Nov. 3. “I anticipate, as we’ve seen around the country already, there will be long lines on Election Day.”

Former Republican Registrar Karen Doyle Lyons reported Tuesday that four political signs had been stolen from her yard in the wee hours of the morning, and they were six feet back from the road so someone had trespassed to do it.

Zwickler confirmed that she filed a police complaint. “There is an investigation. I am not aware of other stolen sign complaints,” he wrote.

Doyle Lyons said she has video of the culprits. 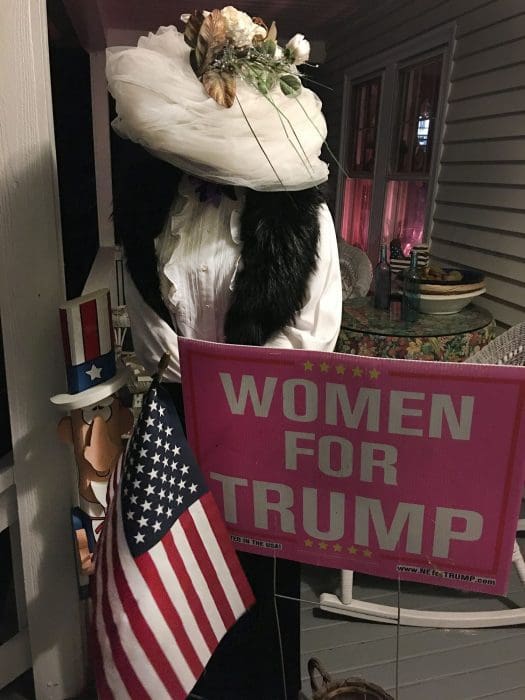 They were signs supporting President Donald Trump or the police department, she said. One was found on a nearby street and returned by a neighbor.

“I can replace signs but I am more upset by people coming on to my property and stealing anything,” she wrote.

Dickens said mostly the only signs he’s heard of being stolen are Trump signs. Local legislative candidates haven’t had problems, he said.

NancyOnNorwalk emailed all the candidates and asked if they’ve had signs stolen.

Stephanie Thomas, a Democrat competing with Republican candidate Patrizia Zucaro for the 141 State Rep. seat, said, “Two Biden/Harris signs were taken on the same night a few weeks ago – from my house and a few doors down. I have noticed other missing signs, but don’t know the cause.”

Former State Rep. Fred Wilms, a Republican trying to unseat District 142 State Rep. Lucy Dathan, wrote, “So far my lawn signs have held up well. Very little in the way of any missing. All of my signs are on private property with the express permission of the owner.”

The times we’re in

“The pandemic? It’s been crazy,” Melendez said. “I mean… we didn’t really know what to expect in March, but I don’t think we expected to be here, you know. And so I think that uncertainty is definitely driving, you know, the absentee ballot requests.”

The number of positive COVID-19 test results is increasing and “we don’t know if we’ll be in a better place in November or in a worse place. So I think that people don’t want to risk that,” she said.

Plus, Connecticut doesn’t do early voting. “This kind of is a form of that,” she said. “Being able to get it done. I have friends all around the country who have already voted, voted in person, but through early voting.”

They’ve waited in line, she said. But Norwalkers are lucky, there are many polling places and while people out in the country might have to travel miles to vote, it’s not that far to go here.

“I mean, obviously, there are certain hours that are, you know, lunchtime and like after work that, a little bit of a line will form, but nothing like what we’re seeing and what we have seen for years around the country, lines that are hours and hours long,” she said.

There are national news stories quoting Republican strategists as being worried that Trump will depress the Republican vote, because he’s casting doubts on the absentee ballot process and you don’t know, anything can happen on Election Day to keep people from going to the polls.

“I think it would have to be a really, really bad weather day to keep people from voting this year,” Dickens said. “I mean there is such a hunger and such activity, I’ve never seen, of people wanting to go vote.”

He also mentioned the people standing in line to vote, in Texas and Georgia. “I think the same thing will happen here in Norwalk on November the third,” he said. “We’ll have very long lines Election Day.”

It’s not like last year or other years, “everybody’s going to vote, one way or another,” he said. Americans pride themselves on elections, it’s a right won with blood, through wars and other conflicts.

“This is really our sacred right as citizens and nobody should take it lightly,” he said. “This is a really, really, very important election from the State level right up to the Presidential level. It’s very important in the state of Connecticut.”

The office of the Registrar of Voters with so many other Departments have worked diligently to prepare to make every polling sites safe and clean.
Please vote on November 3rd.
I personally am supporting the Republican candidates.