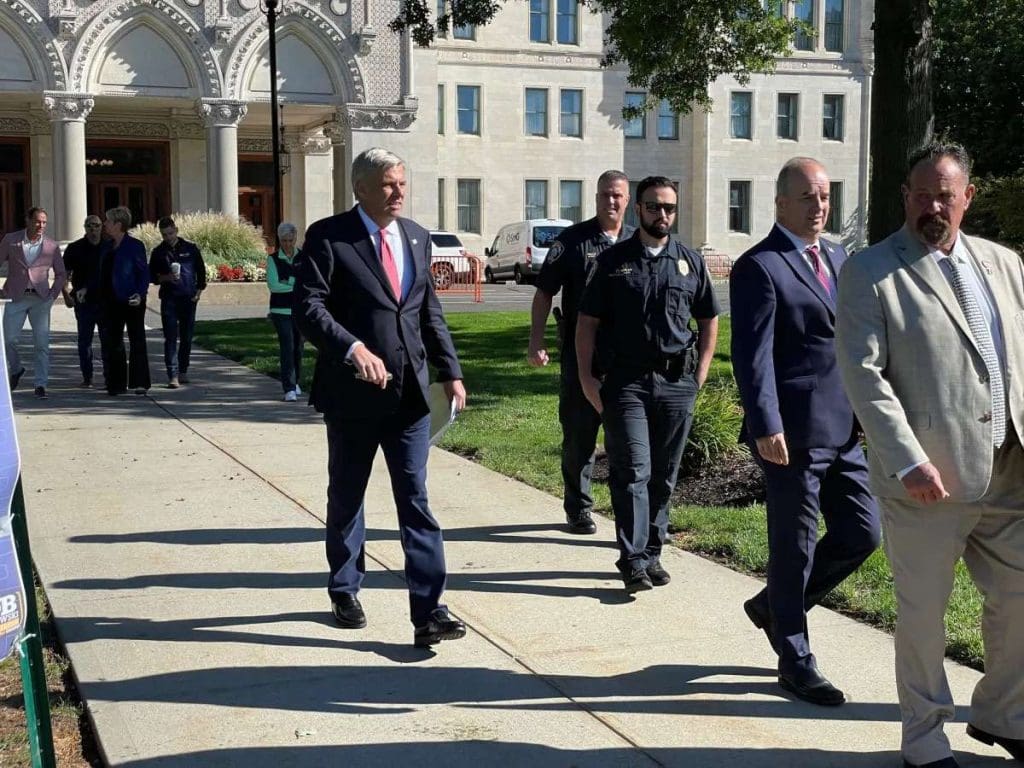 Accompanied by a police officers from Hartford and Fairfield, Bob Stefanowski arrives for his press conference on crime Sept. 29. (Mark Pazniokas, CTMirror.org)

NORWALK, Conn. — Some Norwalk election news for you:

Police Union Local 1727 President Dave O’Connor said he was skeptical about giving Bob Stefanowski a Norwalk Police Union endorsement in his bid to unseat Democratic Gov. Ned Lamont, but one day later  voted along with every other union member to give Stefanowski that support.

Stefanowski, the Republican gubernatorial candidate, came to NPD HQ Thursday and spent 45 minutes warmly talking to officers, O’Connor said. Not only was that touching and impressive, “He made us feel that all is not lost in the state of Connecticut for policing.”

O’Connor said Wednesday that with Stefanowski well behind Lamont in the polls, he didn’t know if it was wise to back a losing horse. He also asked if Stefanowski thought police were stupid when he promised to repeal the police accountability law enacted two years ago.

Stefanowski told union members Thursday that there’s a poll showing him two points ahead of Lamont, O’Connor said. He promised to have a Republican legislator introduce legislation to try to “straighten out” the law. “I still think it’s an uphill battle, because it’s still Connecticut, still a very Democratic state.”

Democratic legislators promised to revisit the legislation in the next session O’Connor said, but “it hasn’t happened yet.” He feels new blood is needed to make changes, because every lawmaker has constituents to please and no one wants to admit they were wrong. “I think part of the issue of being a politician in 2022 is you’re always working for your next campaign…. They’re pandering to a small group rather than the entire state.”

The law, which created the office of an inspector general to investigate complaints of police misconduct, requires police and correctional officers to intervene when witnessing brutality, mandates body and dash cameras, limits warrantless searches, bans chokeholds in most circumstances and clarifies that deadly force can be used only when police exhaust all reasonable alternatives.

O’Connor said he wants the qualified immunity and use of force restrictions removed. He doesn’t like body cameras but “they’re more of a shield than being used against us” and he doesn’t object to that part of the law.

The law is “one-side” and portrays police officers as “the enemy,” as if their exclusive intention is to hurt people, O’Connor said.

Union members back Stefanowski on other issues, as citizens, he said. 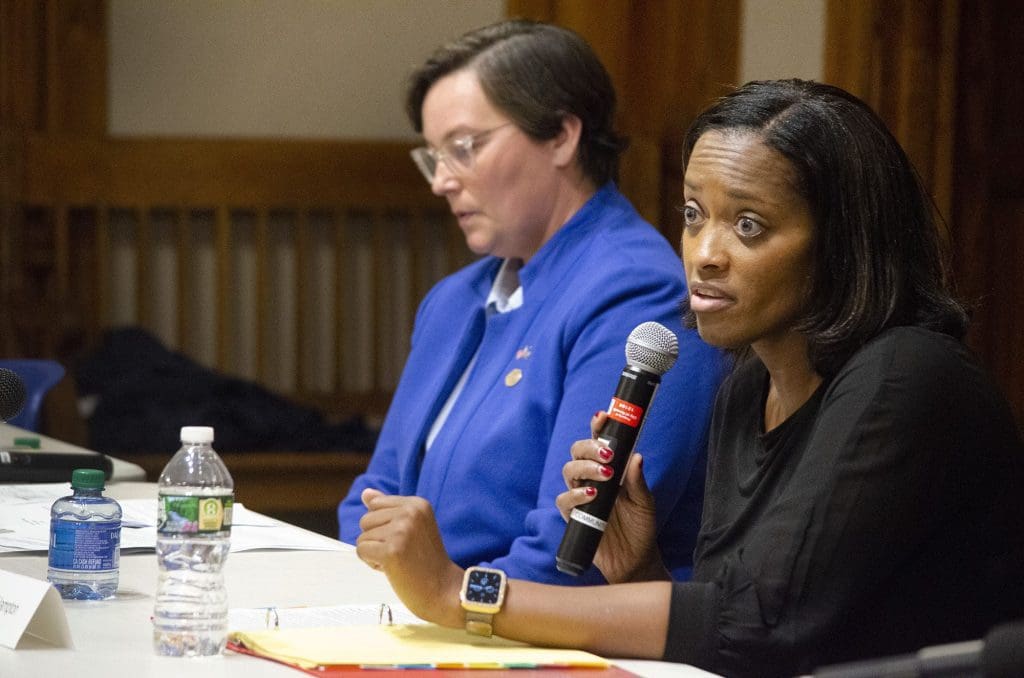 O’Connor said the Union endorsed Republican District 143 State Representative candidate Nicole Hampton after speaking to her Thursday. He said that Hampton supports the police, and was the only local legislative candidate to ask for an endorsement. “I don’t think it’s my job to chase them down to ask them to come in and speak with us.”

Hampton is running against Dominique Johnson for the seat being vacated by Stephanie Thomas, the Democratic Secretary of State candidate.

Hampton supports the police, he said.

In July, the union endorsed Republican Attorney General candidate Jessica Kordas, who also reached out to get the nod, he said. Kordas, a Norwalk Attorney, is challenging incumbent AG William Tong, a Democrat.

“We’ve known her for a long time, she has been a friend to policing in general,” O’Connor said. 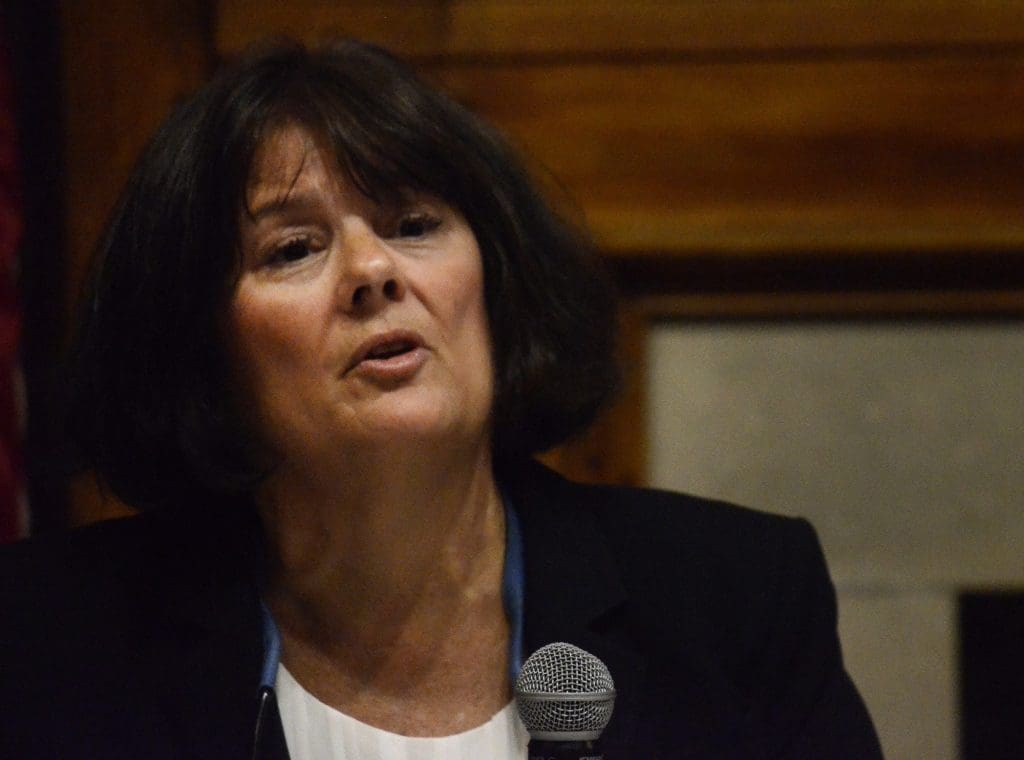 Independent District 25 State Senate candidate Lisa Brinton has been endorsed by the Griebel-Frank for CT party, she announced Thursday.

“Brinton earned the endorsement because of her commitment to support an important democracy reform bill that Governor Lamont, should he be reelected, has pledged to introduce during the next session of the General Assembly that would establish Ranked Choice Voting (RCV) in Connecticut,” the news release said.

Brinton is challenging State Senate Majority Leader Bob Duff (D-25), though she has said she feels Duff will easily win and she’s running to hold the third ballot line for the Independent Party. Daniel Miressi is the Republican candidate.

Duff did not reply to an email giving him a chance to respond to Brinton’s endorsement. Miressi did.

“First, I wouldn’t want the same endorsement as Ned Lamont. It would be antithetical to everything I stood for,” Miressi wrote. “Second, I believe this is another example of Lisa putting party over people as she looks to advance the Independent Party line and election reform. So, is a vote for Lisa a signal of support/approval for Ned Lamont too? What’s ‘independent’ about that?”

“I am honored to receive the Griebel-Frank for CT endorsement and join those fighting for election reform, especially from that ‘third line’ across the state of Connecticut,” Brinton said in a statement. “As voters are aware, I have been fighting for reform in Norwalk for years.  Both parties claim and counter claim a desire for fairer and freer elections – yet to date, have refused to introduce reforms that would increase turnout, improve proportional representation, increase checks and balances and transparency or tamp down party extremism. I am pleased that Governor Lamont has pledged this reform should he win this November.”

“Ranked Choice Voting is one way voters can fight back against hyper-partisanship and present non-partisan solutions compared to the divisive nature of our election cycles,” the news release said. “Ranked Choice Voting also gives voters more choices, reduces negative campaigning and assures winners are supported by a majority of voters, and not just the largest minority.”

Stevenson’s still in it 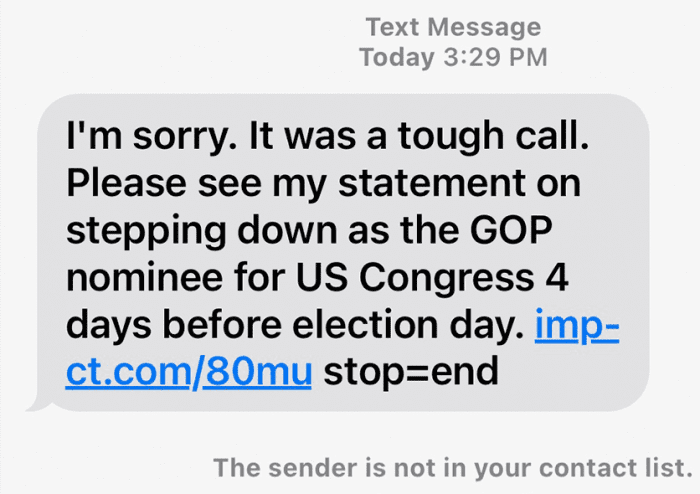 Jayme Stevenson warned Thursday that a deceptive text campaign was falsely claiming that she is “stepping down as the GOP nominee for US Congress 4 days before election day.”

“Jayme Stevenson is and remains a viable candidate for US Congress in Connecticut’s 4th District, and will in fact be on the ballot on November 8th,” the Stevenson campaign said in a news release.

Stevenson, former Darien First Selectman, is challenging U.S. Rep. Jim Himes (D-Greenwich) in his reelection bid as both a Republican and an Independent. The Himes campaign had no comment.

“Stevenson became aware of the scandalous text when a local Board of Finance member shared the message with her campaign team,” the news release said. “In addition to stating that the deceptive message is completely false, Stevenson is also warning voters not to open or click through any links that may seem like a hoax. Official messages from Jayme Stevenson for US Congress or any other candidate are all obligated by law to have a campaign disclaimer.”

“It is most disheartening to see that our election process remains under attack by bad actors who will stop at nothing, including breaking the law, to disrupt our democracy and deceive voters,” Stevenson said in a statement. “Today’s assault on democracy only strengthens my resolve to make this a priority for the voters of our district and the American people.”

Thank You NPD!!! We know the Unions usually just follow along and endorse the other candidates but NOT this time! These candidates support you 1000%! THEY BACK THE BLUE! They will protect you and will be the people that fix this horrible Anti Police Bill Bob Duff rammed down the Legislatures throats and had Tyrant Lamont sign it. Of course right after “Spitgate” You all remember the one where Duff LIED straight out about being Spit on. And then had the nerves to waste Tax Payers Dollars and have State Police sit in his driveway for 3 days.
And where was Dominque yesterday!? We know she WAS invited! I mean why wouldn’t a candidate who claims to have the endorsement of another police union in the State want to show up!? But I guess when you’re endorsed by the Working Families Party and the new DEI useless person in Norwalk who call to Defund The Police I guess I wouldn’t want to be there either!
NICOLE, BOB, DAN & JAYMEE SUPPORT our Brothers and Sisters in BLUE! Please VOTE on Tuesday for these amazing candidates!

All of the NPD deserves a medal for endorsing Stefanowski. CT under Lamont has become noticeably very dangerous with the nightly murders and shootings in the New Haven area and the spreading of petty crime into all of the Gold Coast towns. Its also obvious that there seems to be very few Police that are enforcing dangerous traffic behavior as there also seems to be a traffic death nearly every day in the state. Its time for the citizens of CT to wake up and recognize that Lamont and the Democrats who are his puppets have overreached in their Police Reform Bill and the its now time for well managed Police Departments to publicly show their concern by endorsing candidates who will let them keep the public safe. NPD is showing that rather than suck up to the governor and his Police Reform Bill at the expense of the publics safety they will take the high road through endorsements that show the public that they are dedicated to their safety – rather than playing the dangerous ” we are good little democrats ”
game. WAY TO GO NPD!!!!!

The origins of the hoax email can probably be attributed to blatant campaigns by vocal disgruntled outlier republicans who have sought to undermine Stevenson’s candicacy in prosecution of their grievance for Michael Goldstein’s primary loss.

Congratulations are in order to Lisa, and the other 35 candidates who support election reforms in CT.

Recall, the resurgence of the Independent Party in Norwalk is a direct result of the failure of the local GOP to mount any kind of opposition to the dominant organization – The Harry DTC. There is no need to repeat the failures – simply look at the election results since 2013. The Pittsburgh Pirates have a better record over that span.

An obvious influence in these outcomes is the wide difference in registration numbers, and – the pathetic voter turnout & low participation in municipal and state elections. Why? Because a huge portion of the electorate are deliberately pushed out of the process.

The Greibel-Frank for CT Party recognizes this statewide, and so – in order to win cross endorsement, the candidates have to pledge to support these election reforms.

Now we ALL know why Bob won’t answer this – he’s been a direct beneficiary of this broken system for close to 20 years. He is not for anything that doesn’t benefit HIM – this is what he calls “Standing Up For YOU”. He means – himself. But give Daniel a pass, he simply doesn’t get it. This is too bad, because it only hints at the fact the GOP altogether hasn’t learned – RCV may be their only hope to become relevant in CT once again.

To Mr. Miressi – the ONLY leverage the minority parties have is the endorsement. If you don’t think it matters – then why did Stefenowski go berserk and sue the Independent party when he couldn’t own it? If you have a problem with a cross endorsement for a candidate that pledges to support our reforms, does that mean you have a problem with the Independent Parties cross endorsement of Don Mastronardi?

Lisa Brinton can explain the benefits of RCV, but so can a frequent commentor on this blog – @David Muccigrosso. Maybe read his comments.

Come Tuesday night – the usual “I have a mandate” speeches (with less than 25% of the electorate) will be made, along with the usual hand wringing and eulogies. Hopefully by Wednesday morning, Norwalk & CT will be on a path towards clear election reforms, with greater participation by the disenfranchised “U” residents and moderates from all sides. The greatest gift the voters can give to their city, state, and themselves is – the end of single party rule, and minority manipulation of the system for the benefit of a few.

Congratulations, Lisa! Although Duff will still probably win this time, your campaign is making real progress towards healing our democracy.