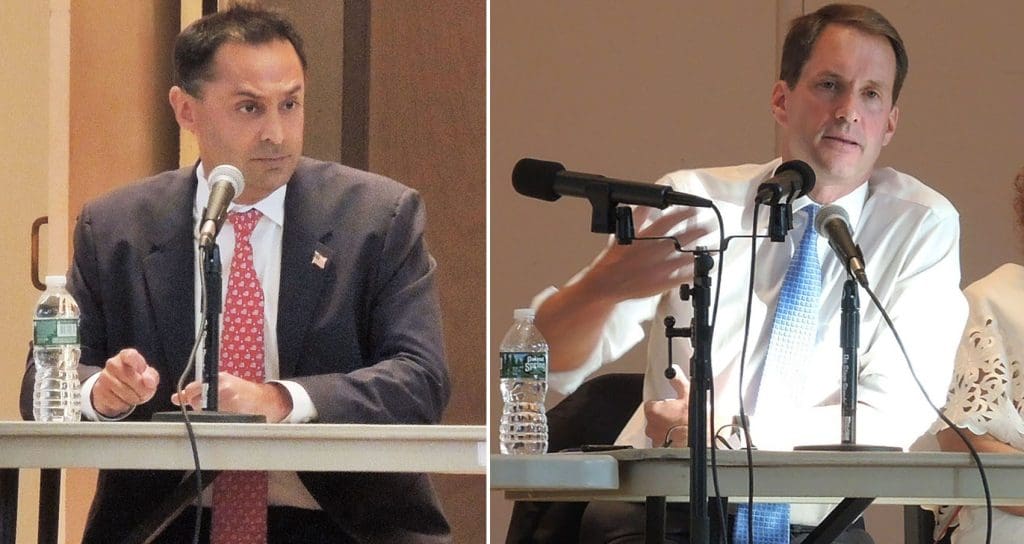 NORWALK, Conn. – Here’s some election items for you:

Connecticut election officials have “a big problem worrying about (Russian) hacking,” Norwalk Democratic Registrar Stuart Wells said in July, and Norwalk has “volunteered to be a canary in the coal mine.”

Wells and Republican Registrar Karen Doyle Lyons were visiting the Common Council Personnel Committee on July 18 to request pay raises, as they did unsuccessfully two years ago. Registrars have more responsibilities than they used to, given the state-wide voter registration system and the state-wide system for reporting results, “all of which take a lot more effort on our part… and we have the Russians to worry about,” he said.

Some “excellent programs” were written by an Information Technology (IT) staff member, one of which compares the information downloaded daily from the state, from one day to the next, Wells said.

“If the Russians hack the state system they would presumably change addresses or parties, or something like that, and we would see on our daily report that a lot of those had changed, many more than we could account for ourselves and we could warn the state about that,” Wells said.

“No one in IT has written a program that studies voter information for signs of Russian hacking,” IT Director Karen Del Vecchio said in a Sept. 11 email, which was missed by NancyOnNorwalk until Wednesday.

“An IT employee wrote a report for the Norwalk Registrars which looks at the Norwalk data on the State of CT Voter Registration system,” Del Vecchio wrote. “The report compares the number of data set changes, like name changes, party changes, address changes, etc, since the last report.  The report essentially looks for atypical activity for the Registrars to review and validate – a check-balance on data integrity.”

Frank Sarno wrote the program, and retired in July, she said.

Two years ago, Common Council members compared Norwalk registrars to those in Danbury, without factoring in the cost of living difference, Wells said.

He also mentioned that he and Lyons want to expand their part-time staff members to full-time.

The Committee hasn’t publicly discussed the matter since then.

Arora has previously accused Himes of refusing to debate.  He noted that in Himes’s first campaign he requested incumbent Chris Shays debate him 10 times.  There were seven debates in that contest, which Himes won.

“I firmly believe that for our democracy to thrive, we need honest and respectful discussion,” Arora wrote in a petition posted Sept. 11 on his website. “…I have suggested focused debates to Mr. Himes on the ECONOMY: JOBS, TAXES & HOME PRICES, HEALTHCARE, EDUCATION, SCHOOL SAFETY, IMMIGRATION, ENERGY and ENVIRONMENT.”

“Invitations to participate in the debates were sent out to both campaigns via the hosts, and both candidates accepted the invitation,” the Monday press release from the Himes camp said.

Only one of the three debates has a theme; the Stamford debate will focus on foreign policy, the release said.

Hosted by the League of Women Voters

“The Congressman encourages his constituents to attend each of these debates to learn more about both candidates,” the release said.

“We need a Congress that will fulfill its Constitutional duty to act as a check and provide oversight of this President and his administration, and fight for investments in our aging infrastructure, commonsense gun reform and the protection of the Affordable Care Act from attacks on pre-existing conditions,” Himes is quoted as saying in the release. “I look forward to discussing these issues and more in this series of debates.”

“For the past 10 years, Himes has promoted policies that have hurt our district – both economically and socially,” Arora states in the petition. “Jobs have left Fairfield county, residents are moving out and home prices are struggling. Healthcare has become unaffordable, educational outcomes have stagnated and our immigration system remains broken. Today, Himes continues to promote a socialist agenda while he does nothing about issues critical to our community.”

“The high number of WFP endorsements in 2018 is a sign of growing progressive enthusiasm in Connecticut, with more candidates than ever before running on key WFP issues like paid family leave, a $15 minimum wage, a fair tax structure, and debt-free public college. It is also testament to the importance of 2018 in determining the future of our state — either one where we build an economy that works for all of us, or one where corporate lobbyists seize control and undermine opportunities for all but the wealthy and well-connected few,” the release said.

“The Working Families Party would also like to express support for Congressman Jim Himes in the 4th district, for his leadership on green, pro-worker infrastructure investments through the Millions of Jobs campaign,” the release said. “Because of cumbersome, outdated petitioning requirements, Congressman Himes will not be formally endorsed to appear on the WFP ballot line, but we encourage voters to recognize his critical advocacy in fighting some of the worst attacks from the Trump administration on our families by voting for him.”

“Voters in 2018 face a defining moment in our history, with our civil, social, and economic rights under attack in ways we hadn’t seen in decades,” Connecticut Working Families Party state director Lindsay Farrell said in the release. “Now more than ever, we need elected officials who will not only resist these attacks, but will push forward with smart, forward-thinking ideas like paid family leave, a $15 minimum wage, and debt-free college. That’s why it is important to have so many candidates across Connecticut making the difference by running on bold, pro-worker platforms.”

Registrar of Voters pay has been consistently falling behind inflation for at least the last 25 years. Benefits are getting cut as well. The job duties and responsibilities keep increasing and we now have over 51,000 voters – almost as many as Hartford. Per the city charter, it is the Council’s job to set our pay every two years, before our new term of office begins. They tend to forget, in part because we are elected in State election years while the Council, Mayor and Town Clerk are elected in Municipal election years. Also, the cost of living in Norwalk is 50% greater than the national average and a lot more then Hartford’s. This is due to the cost of housing.

The person from IT that wrote our “canary in the coal mine” program was Frank Sarno — now retired. Hopefully the Russians don’t read Nancy on Norwalk because it would be a somewhat more effective program if the Russians didn’t know there even was a “canary”.

Registrars have to go hat in hand to request that their pay does not decline in value, while the council is handing out raises and plummy new titles in a reorganization that is not justified by reduced costs, increased services or documented efficiencies in operations.

You just can’t make this stuff up.

What is the pay for the Registrar position?